Princess Mononoke Princess Mononoke (Japanese: もののけ姫 Hepburn: Mononoke-hime, “Spirit/Monster Princess”) is a 1997 Japanese epic historical fantasy anime film written and directed by Hayao Miyazaki. The story follows the young Emishi warrior Ashitaka’s involvement in a struggle between forest gods and the humans who consume its resources. I love this movie. The forest spirt, the strong female protagonist and how… Read more → 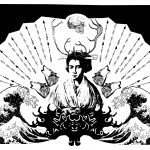 Hello here are my final compositions for this assignment. The movie I selected is Princess Mononoke from Studio Ghibli.   “The trees cry out as they die, but you cannot hear them”- Princess Mononoke (1997) Read more →