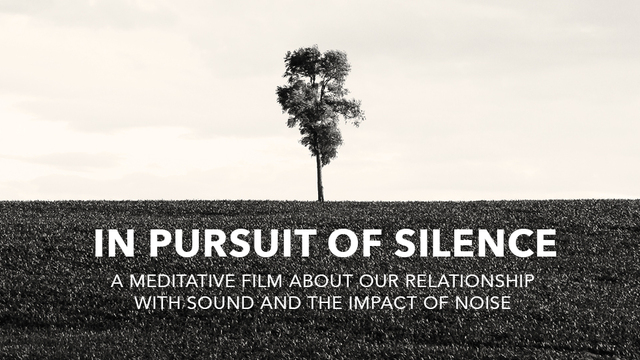 “Silence is where we speak something deeper than our words…”

“Silence returns us to what is real.”

I caught several films at the Design Film Festival this September 2016. One which i was looking forward to the most was In Pursuit of Silence. It is a documentary film that speaks about the beauty of silence, its spiritual and physical benefits and the effects we are experiencing individuals and collectively in our increasingly noisy world. Yet, there is an additional layer of poetics that is peeking through the meanings of the film. The trailer was strikingly thought-provoking. It was a compilation of people from different fields of specialities speaking about the ‘Silence’ itself. The visuals that were linked to silence surprised me. They ranged from big cities to vast forest landscapes. I wonder though, how would it be like to talk about the politics of silence or noise?

In the noise of the modern world, silence is fast becoming absent. As much a work of devotion as it is a documentary, Patrick Shen’s film powerfully begins with an ode to John Cage’s seminal silent composition 4’33” then passes as a piece of meditative cinema that explores the human relationship with silence and sound, and the impact of noise on our lives.

4’33” pronounced “Four minutes, thirty-three seconds” or just “Four thirty-three“) is a three-movement composition by American experimental composer John Cage (1912–1992). It was composed in 1952, for any instrument or combination of instruments, and the score instructs the performer(s) not to play their instrument(s) during the entire duration of the piece throughout the three movements. The piece purports to consist of the sounds of the environment that the listeners hear while it is performed. The piece refers to the total length in minutes and seconds of a given performance, 4′33″ being the total length of the first public performance.

4′33″ originated while the composer was working on Sonatas and Interludes around 1947–48. For Cage, it became the epitome of his idea that any sounds may constitute music. It was also an attestation to the influence of Zen Buddhism, which Cage studied since the late 1940s. In a 1982 interview, and on numerous other occasions, Cage stated that 4′33″ was, in his opinion, his most important work. The New Grove Dictionary of Music and Musicians describes 4′33″ as Cage’s “most famous and controversial creation”.

An excerpt from an article speaks of 4′33″ in the film,

Archival footage reveals the avant-garde composer John Cage ruminating on how his almost mystical relationship with silence informed his compositions, including the legendary 4’33” — a work that consists of four minutes and thirty three seconds of silence (or, rather, of whatever ambient sound exists wherever this work is being performed) . Indeed, the movie begins with an homage to Cage — the first four minutes and thirty-three seconds of the film are silent, a de facto performance of Cage’s 4’33” set to a succession of lovely images. Cage (and 4’33”) dance throughout the film, with looking at how controversial the composition was when it was first performed in the 1950s, and how respected it is today — perhaps because we’re slowly coming to realize just how valuable (and endangered) silence is?

Traditionally, silence is an absence of sound. In my exploration towards how the senses and the big cities relate, I thought that the film brought up several good points worth thinking about especially towards the meaning of ‘Silence’ in today’s times.

Silence is not just a kind of spiritual treat, but actually an essential condition for human wellness — which makes the pervasive noise of our technological world all the more troubling.

Monastic silence yields to the silence of nature and the wilderness, in a wordless recognition that silence originates from and takes us to a place beyond dogma or socially constructed meaning. Rather than promoting any kind of ideology, the film ponders insights such as Prochnik’s musing on how silence is “the interruption of the imposition of our own egos upon the world.”