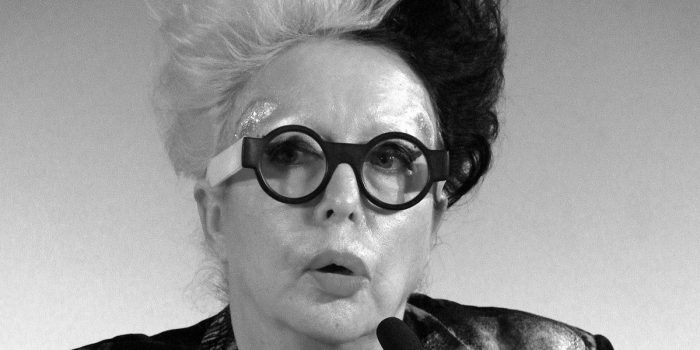 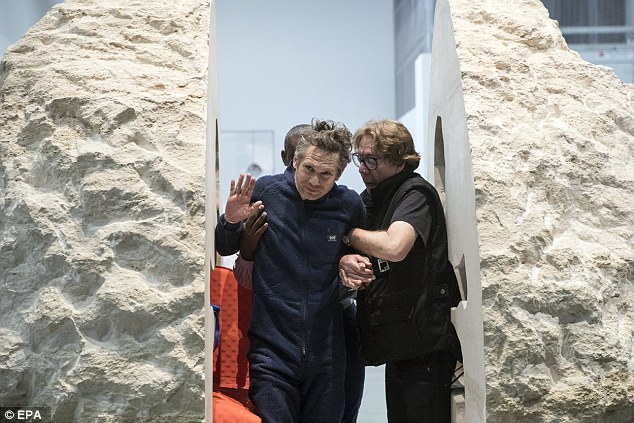 Poincheval is a renowned French artist who is no stranger to bizarre performances. His works mostly related to inventing itinerant or sedentary experiences to discover the world from its still unexplored angles. His past works almost always involved endurance-testing solitary performances such as eating worms and beetles while living inside the bear; navigated France’s Rhone river inside a giant plastic corked bottle; spent a week on top of a 20-metre pole outside a Paris train station. 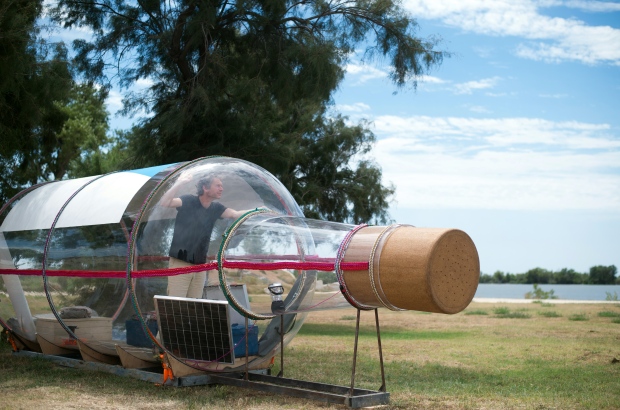 Poincheval poses during his performance of The Bottle in Port-Saint-Louis-du-Rhône. 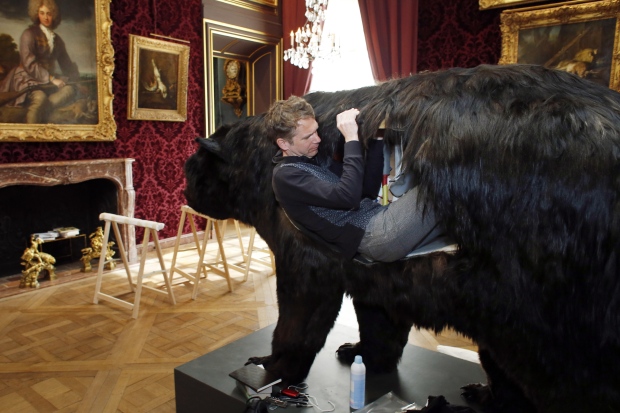 In 2014, Poincheval spent 13 days inside a bear’s skin at the Parisian Hunting and Wildlife Museum

To continue his exploration, in 2017 he embarked on a new extreme performance entitled “Pierre (Stone)” by enclosing himself inside a giant block of limestone. He entombed inside the boulder where he spent seven days on an ‘inner journey to find out what the world is’. 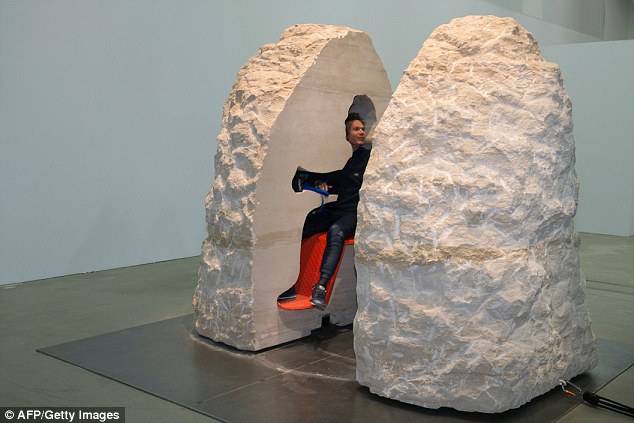 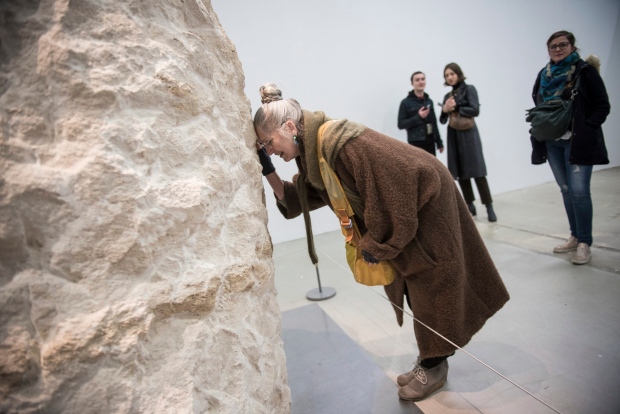 He carved out a hole inside the rock in his own image, just big enough for him to sit up in, with a niche to hold supplies of water, soup and dried meat. During the performance, people seemed to be very touched. They talked into the crack, read poetry to him, or tell him about their nightmares or their dreams. This encourage audience to participate in his performance, which create a very different experiences from his past work. The audience form some sort of connection with the stone as though it was “alive”.

For his experience, even though he can only move his feet and hands a few inches, he did not feel oppressed by the rock and felt completely at ease, in real connection with it.”It’s this strange feeling of a floating world, an incredible floating in this mineral capsule,” he said. 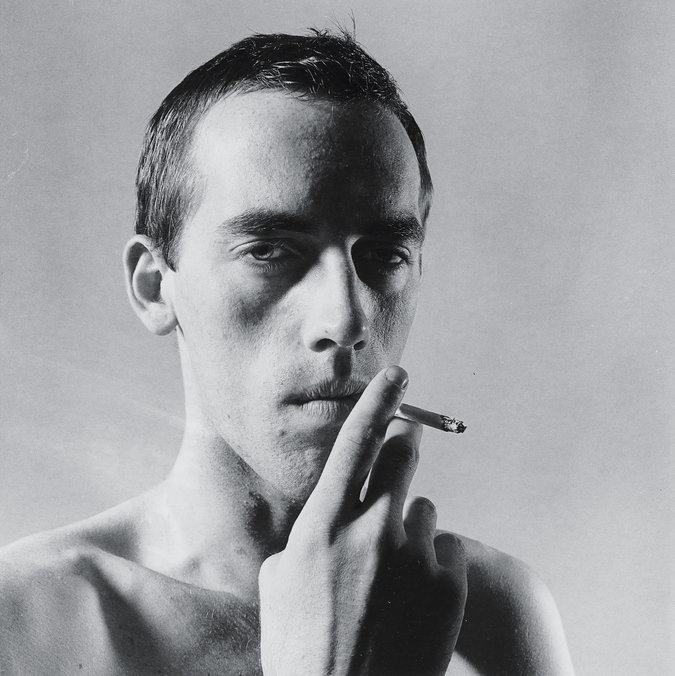 David Wojnarowicz was an American painter, photographer, writer, filmmaker, performance artist, and AIDS activist prominent in the New York City art world. Wojnarowicz was a victim of childhood abuse, he lived for a time during his teenage years as a street hustler. After a period outside of New York, he returned in the late 1970s, where he quickly emerged as one of the most prominent and prolific of an avant-garde wing that mixed media, made and used graffiti and street art. 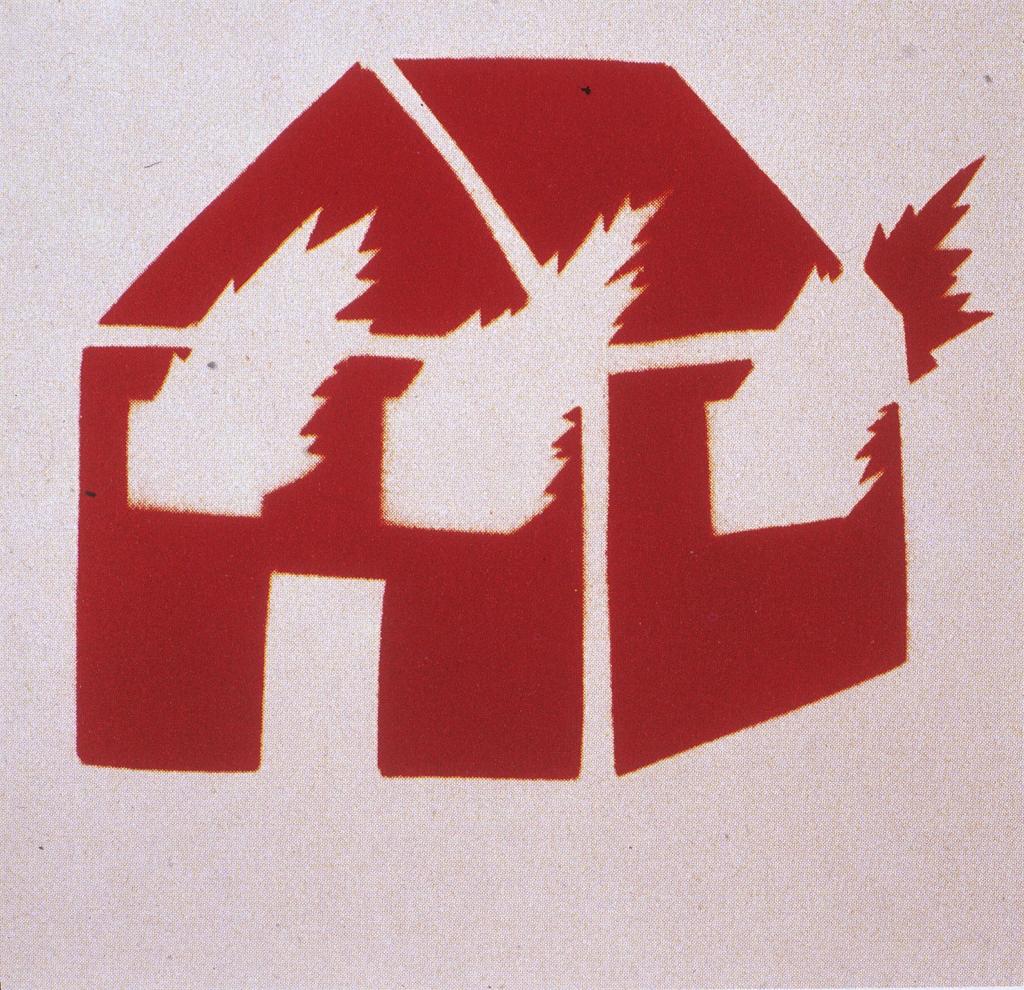 His first recognition came from stencils of houses afire that appeared on the exposed sides of buildings in the East Village. He also made super-8 films, such as Heroin. Wojnarowicz was also connected to other prolific artists of the time, appearing in or collaborating on works with artists like Nan Goldin, Peter Hujar, Luis Frangella etc. For some years, he and Hujar were lovers until Hujar died of AIDS in 1987. Hujar’s death moved Wojnarowicz’s work into much more explicit activism and political content, notably around the injustices, social and legal, inherent in the response to the AIDS epidemic.

“A Fire in My Belly“ is a visceral meditation on cultural and individual identity, spirituality, and belief systems. It echoed themes explored throughout David Wojnarowicz’s art and writing.

On a trip to Mexico City with Tommy Turner to scout Day of the Dead imagery, Wojnarowicz documented scenes that embodied the violence of city life. A central image is that of a child exploited as a fire-breathing street performer, which resonates in the title of the film and Wojnarowicz’s own experience hustling on the streets at a young age. He later staged scenes in his New York City apartment to combine with this footage, collecting dreamlike images to illustrate thematic sections he planned for the film’s structure and cutting script. Among these images is a dancing, gun-wielding marionette, coins dropping into a plate of blood, vibrantly colored loteria cards, and the now iconic self-portrait of the artist with his lips sewn shut.

A Fire in My Belly was never completed. Wojnarowicz’s cutting script shows that he thought of organizing it into discrete sections. Each section includes notes on general themes, such as “aggression” or “hunger,” accompanied by specific symbols – religious icons, the four elements, or colors.

In 2010, Smithsonian Institution removed an edited version of footage used in the short silent film from the exhibit “Hide/Seek: Difference and Desire in American Portraiture” at the National Portrait Gallery after complaints from the Catholic League and the possibility of reduced federal funding for the Smithsonian. The video contains a scene with a crucifix covered in ants. The Catholic League claimed the work was “hate speech”, against Catholics.

However, many artists and curators thought that it was not anti-religion or sacrilegious. It is a powerful use of imagery. In response, The Andy Warhol Foundation, which had provided a $100,000 grant to the exhibition, announced that it would not fund future Smithsonian projects. Many protests were held and artists sought to withdraw their art from the exhibit.

“The Reincarnation of Saint-Orlan” (1990) by ORLAN 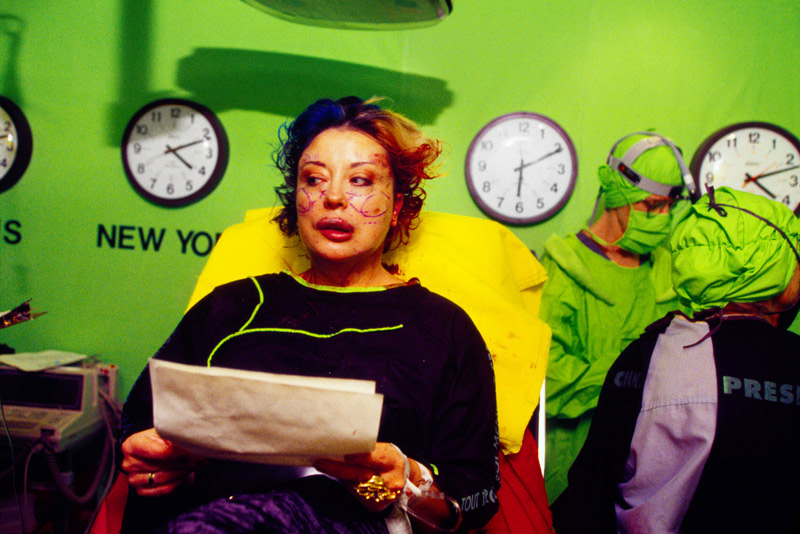 ORLAN is one of the most famous french artist internationally known. She creates sculptures, photographs, performances, videos, using scientific and medical technics like surgery and biogenetic.

She often makes her own body the medium, the raw material, and the visual support of her work. She is a major figure of the body art and of “carnal art*” as she used to define it in her 1989 manifesto.

*Carnal Art: is self portraiture in the classical sense, but realised through the possibility of technology. It swings between defiguration and refiguration. Its inscription in the flesh is a function of our age. The body has become a ‘modified ready-made’, no longer seen as the ideal it once represented.

Her best known work “The Reincarnation of Saint-Orlan” started in 1990 that involves a series of plastic surgeries through which the artist transformed herself into elements from famous paintings and sculptures of women. As a part of her ‘Carnal Art’ manifesto, Orlan’s operating table became her baroque theatre. Poetry was read and music played while she lay fully conscious. Each surgery was captured on video, broadcast in galleries and sometimes fed to audiences around the globe via live satellite link-ups. Some critics have described Orlan as mad, some have written up her interest in cosmetic surgery as anti-feminist. 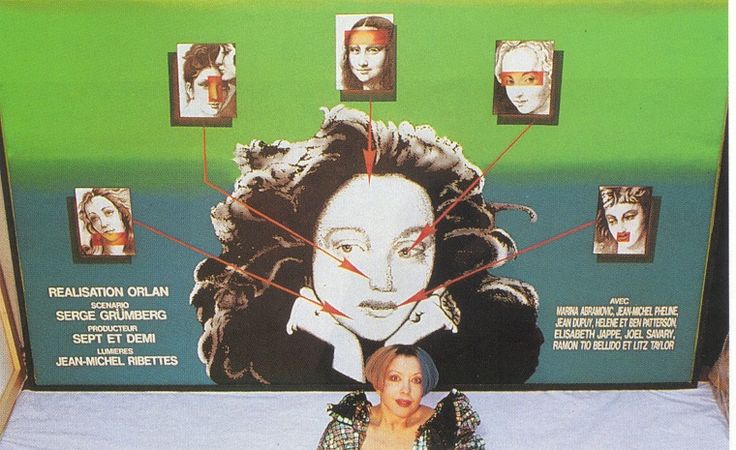 However, Orlan’s goal in these surgeries was to acquire the ideal of female beauty as depicted by male artists. When the surgeries are complete, she will have the chin of Botticelli’s Venus, the nose of Jean-Léon Gérôme’s Psyche, the lips of François Boucher’s Europa, the eyes of Diana, and the forehead of Leonardo da Vinci’s Mona Lisa. Orlan picked these characters “not for the canons of beauty they represent… but rather on account of the stories associated with them.”

According to Orlan’s Carnal Art Manifesto, it’s “not against cosmetic surgery, but rather against the conventions carried by it and their subsequent inscription”. Instead of condemning cosmetic surgery, Orlan embraces it; instead of rejecting the masculine, she incorporates it; and instead of limiting her identity, she defines it as “nomadic, mutant, shifting, differing.” Orlan has stated: “my work is a struggle against the innate, the inexorable, the programmed, Nature, DNA, and God!” She believes it is important to underline her work as a feminist artist.