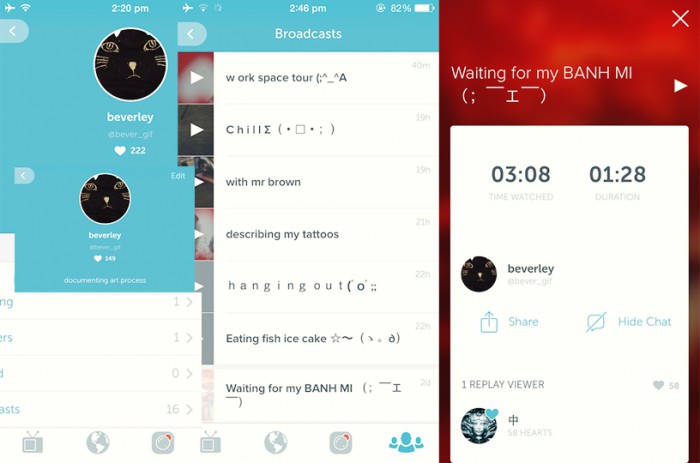 Been using Periscope to take videos of things that I’m doing. Again, I must stress that I don’t do very interesting things everyday. Most of these videos are just footage of me trying to keep up with my to-do list. I don’t overthink when I shoot the videos, and I’m not particularly concerned about where the camera is pointing or if everything I see can be seen through my Periscope eye. I’m just capturing things the same way that I’ve been using the Quicktime screen recording function to record my actions on the computer.

For example, I made a 5 minute broadcast of my FYP meet on Friday. I just left the phone there while class was going on. After class ended, I reviewed my footage and I realised that there’s been quite a bit of interaction going on while I wasn’t looking. From the comments I can gather three things: 1) people are viewing it from various places in the world. 2) dudes make up a large % of my viewership. 3) dudes are creepy. Apart from the comments made by these weird dudes, I find that there are people who aren’t just aimless viewers. There was this guy who could tell I’m in NTU. Someone asked about the haze situation here. I quite enjoy this live/anonymous interactive part of Periscope.

I think I can try to incorporate my Periscope videos with my screen recordings. I’m encouraged to pick up my phone and document my surroundings more actively with Periscope, compared with other social media apps. I asked my friends and family if they are familiar with Periscope, and some have not heard of it. I like it at the moment as it is not used widely in my social circle, which can give me some space to make these broadcasts kind of ‘anonymously’, and having this live audience that’s constantly changing might be helpful for my work as well, rather than making broadcasts targeted towards people who already know me.