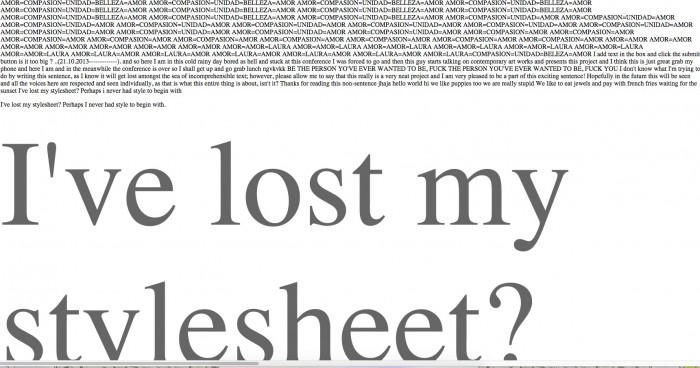 “The Sentence has no end. Sometimes I think it had no beginning. Now I salute its authors, which means all of us. You have made a wild, precious, awful, delicious, lovable, tragic, vulgar, fearsome, divine thing.”
—Douglas Davis, 2000

I really enjoy Douglas Davis’ The World’s Largest Collaborative Sentence. It really exemplifies what we can do on the Internet, as part of a collective whole, from our own computer, from each corner of the world.

These are some of my favourite parts of the work: “I’ve lost my stylesheet? Perhaps I never had style to begin with.” (That’s very funny, I will quote that in one of my works later on…)

The work is made by Douglas Davis in 1994, which makes it one of the very early forms of Internet art, and collaborative performance art via a network. Nearly twenty years on, the work is still ongoing and being improved. Imagine the amount of people who have contributed to the content of this massive virtual work.

That is what I enjoy about the work as well — the nature of the work and being able to keep it alive makes me think about what Deyan Sudjic has to say about the Internet:

An Internet artwork lives on a server, which allows it many possibilities for expansion, collaboration as well as preservation. This ‘immortality’ of the work gives it opportunity for it to carry on for many generations of people, so it will continue being the longest collaborative sentence. I think this is particularly interesting because the work could also give viewers a glimpse of Internet trends: bits from early Internet art at the time of the creation of the work, as well as things that are influenced by the Tumblr generation.

I enjoy this work a lot, and personally find that it will be useful as a reference work in my final year project too.