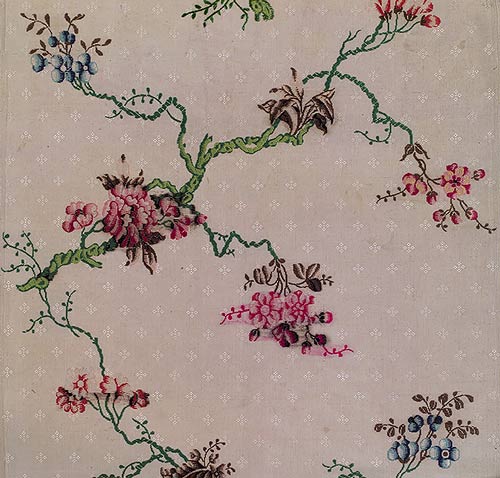 In the field of textiles there have been two great periods of Chinese influence. The first, in the 14th century, has already been described in the section on Italian silks. The other great period began in the 17th century with the further opening up of trade with the East via the Cape of Good Hope.

On the collapse of the Ming Dynasty in the seventeenth century, when trade resumed and artifacts flowed West again, the prized commodities that had to travel so far to the Italian port cities and to Portugal, England, and Holland were the most portable, and most telling of the East’s customs and culture. Easiest of all such products to import because of their relatively light weight, import textiles from China prompted fascination with the technical skills involved in weaving, hand-painting, and needle-work of Chinese silk. Textiles were accompanied by other luxury objects. The porcelains carried to the West in the same period provided depictions that showed the West how costume was worn in China.

It is important that it was not Chinese textile design but the designs on Chinese porcelain and lacquer that inspired the European textile chinoiserie referred to above. This inspiration lasted right through the 18th century and can be found in every branch of the textile arts. Exotic flowers, foliage imitating bamboo, pagodas, fantastic architecture, and quaint figures are there in great variety.

The two most important kinds of decorative textiles produced in China for the European market during the 18th century were embroideries and painted silks.

Almost without exception, the precious cloth was readily made into Western tailored garments. Thus, a French eighteenth-century cloth-of-silver dress is identifiably of the period, recognizable by its silhouette – with extended centre-back pleats from neckline to hem and panniered lateral extension – and by its floral pattern. Amidst rococo roses, however, reside pagodas and palm trees. These are fashionably present as they are in Georgian design, “Chinese Chippendale” mid-eighteenth-century furniture, Jean-Baptiste Pillement’s fantasies, and the colourful wallpapers with Chinese themes that adorned Enlightenment boudoirs.

The faraway dream of Cathay and of forbidden cities suggested to the European imagination a set of ceremonies and court life to rival those of Europe. Little was known of the Chinese court, and its ritual was therefore concocted in fable and reified images purporting to depict the most magnificent and densely peopled festivals and rites. Thus, images of full-dress ceremony would appear stately in the manner of the eighteenth century of the first half of the nineteenth century. After the Prince of Wales (later George IV) had the Brighton Pavilion built in the 1780s, the extravagance of exotic fabrication seemed capricious and profligate, discordant with the intense economic matters of empire. Likewise, textiles assumed a new sobriety. By the 1850s, however, exoticism was tempered increasingly by an ethnographic respect and accuracy, as the bourgeoisie that was looking for an East beyond formal gardens and enigmatic ceremonial pomp sought and delighted in a bona-fide Chinoiserie […] An at-home dress of the 1850s is characterisetic of this nineteenth-century change in attitude. The ebullient and inventive Chinoiserie of earlier times now became a deliberate and self-conscious use of Chinese materials and symbols. Floral medallions might not be taken in the West to be direct symbols of China, but they were surely locatable to the constraint and gravity characteristic of China. To wear a Chinese dress at home was not a frivolous and fanciful gesture; it was an imperial act, signifying worldly knowledge.

This painted silk gown is The Costume Institute’s earliest example of the eighteenth- century fashion for exoticism and chinoiserie. The gown’s bold, somewhat fantastical floral pattern, with its use of dense areas of saturated color, is not, however, typical of the more commonly seen Chinese export silks, with their delicate and naturalistic designs.

Technical analyses of The Costume Institute’s examples of Chinese export textiles by the Museum’s Objects Conservation Laboratories revealed pigments bound in animal glue with underpainted designs in lead white outlined in silver and black paint. In contrast, the analysis of this gown disclosed the presence of a plant gum binder but no underpaint or silver and black painted outlines. Four pigments were used to create the palette—Prussian blue, gamboge, and red and brown lake—suggesting that the gown is most likely of European manufacture.

As early as the late eighteenth century, factories had been established in England, France, Holland, and Germany to replicate Chinese painted silks. Huguenots had begun to produce silks in Germany with the support of the Prussian governor, and it is likely that this textile is of Dutch or German origin. In addition, evidence suggests that the gown itself was constructed in England and thus is an exceedingly vivid surviving example of the intersecting transits of culture and commerce that permeated the period.