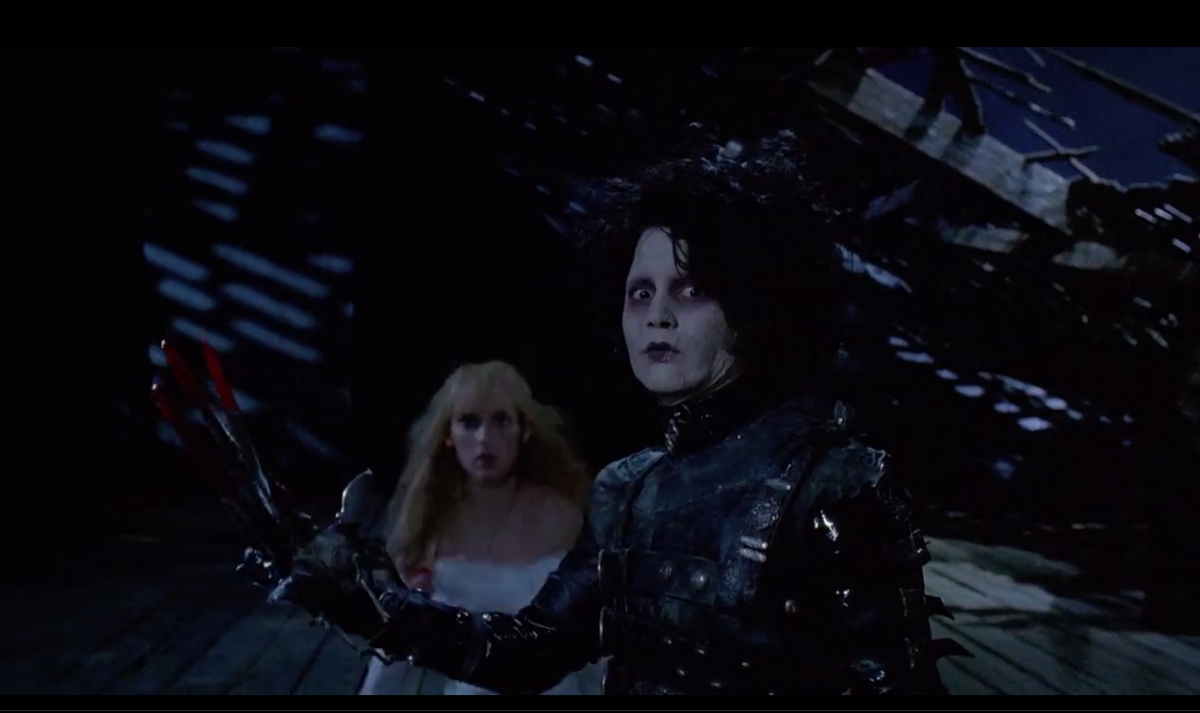 Hi Folks! Thought it would be interesting to see how German Expressionism manifested itself in a blockbuster film in recent decades, after learning about its historical popularity and reception.

Edward Scissorshand (1920) was briefly mentioned in class, so I would be giving an analysis of its visual and thematic style here! I would also briefly give a comparison with The Cabinet of Dr. Caligari, to see how Tim Burton drew on the influence of Robert Wiene and his significance in doing so. 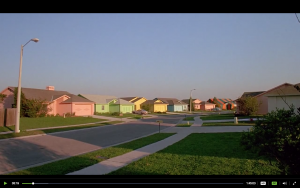 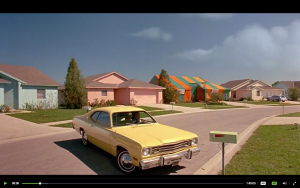 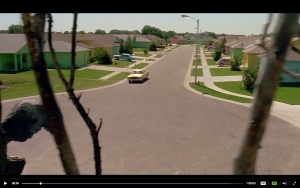 In Edward Scissorshand, the whole town in which the plot is set in is bright pastel perfect, with geometrically symmetrical lanes and big shapes, almost cartoon-like. Just as the readings have pointed out, expressionistic films uses “large shapes of bright colours”, 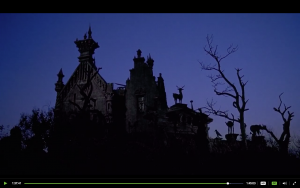 “juxtaposition of similar shapes”. In the town, Edward’s house stands in contrast with the others, as his castle has a “dark cartoonlike outline” as described in the readings, with crooked tree lines forming an uncomfortable silhouette.

Being set on top of a hill in the town, Edward’s castle is likened to a scene 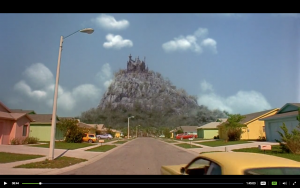 in The Cabinet of Dr. 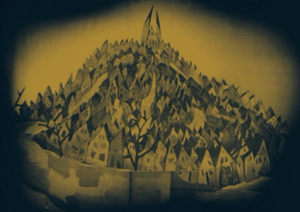 Caligari, which also portrays an unusually uncomfortable looking town, with a mountain like view. This perhaps goes to show the fantastical and imaginative nature of German Expressionism.

The readings suggested that films inspired by German expressionism would have sets acting in conjunction with the actors, almost like “blending in with the actor’s movement”. In Edward Scissorshand, the town folks’ costumes blended in with their houses, being in the same pastel colours and in minimalized designs, just as their houses are. 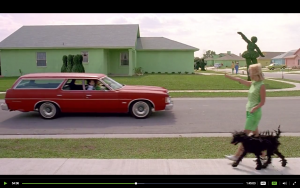 In this particular scene, the woman’s Christmas costume matches the decoration of her house. 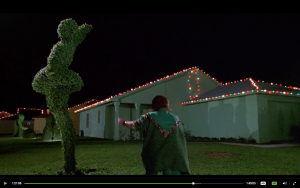 Not only are the costumes allowing the actors to blend into their set, the actor’s position in the movie are at times symmetrical to their background. In this scene below, this lady’s position on the couch mimics the artifact hung on her wall, as if the set is a “living component of the action” (mentioned in readings). 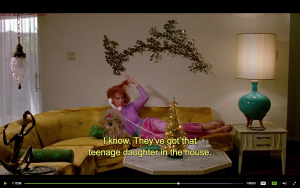 The interior of Edward’s castle is dark and gloomy, with a few streaks of light streaming into his habited spaces, just as it is depicted in The Cabinet of Dr. Caligula. 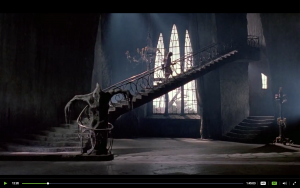 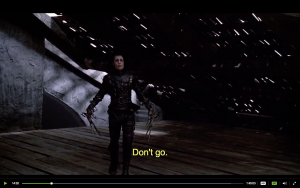 The darkness and low-key lighting of the films creates shadows that highlight the darker thematic undertones of isolation and madness (which I will cover later in the post!). As read in the readings, the shadows can further “create additional distortion”. Edward’s gothic costumes, consisting of a black leather suit, blends with the interior of his castle, associating them as one, further emphasizing his character as mysterious and hidden away from the town folks.

Edward’s scissors as hands is also a blend of actor and props, such that the scissors are mounted onto the actor’s real hands and work in tune with his movement in the film. This shows how the expressivity in German Expressionism “extends into every aspect of the mise en scene”. 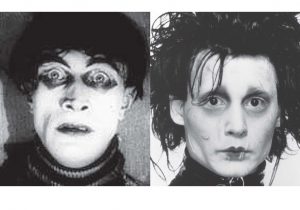 Both of them have grotesque faces, and anguished expressions as mentioned as a typical actor’s style in German Expressionism!

Both Edward Scissorshand and The Cabinet of Dr Caligari touch on the themes of madness. Edward is referred to as a “perversion of nature” by a town folk, a psycho for having scissors as hand. The madness in the film could also be interpreted as anger, seen through Edward’s two anger outbursts at the Kevin, one resulting in Kevin’s death at the end. In Dr Caligari, the plot later shifts to an asylum, eventually revealing Francis as a mental patient.

The theme of isolation also resonated very strongly in Edward Scissorshand. Edward is forced to live in isolation in the castle from the rest of the town folks before being brought into town by Peg. But the isolation he had carried with him also caused his host family to be isolated from their neighbours, as seen when neighbours boycotted their Christmas party. At the end of the film, Edward is forced back to live in isolation in his castle once again, a depressing ending indeed. Edward’s isolation is inspired by Tim Burton’s own isolation he felt when he was a teenager (http://www.denofgeek.com/movies/14887/revisiting-tim-burtons-edward-scissorhands). Comparing it Dr Caligari, the period of German Expressionism emerged and gave rise to Dr Caligari as a result of the German Film industry’s isolation between 1916 and 1921.

Isolation may be viewed upon as a negative attribute, with a destructive ability to cause madness. However, isolation bears in itself the power to conceive newness, the power to give birth to new expressions that challenges norms. This significantly sheds light into how isolation is a power force that drives the thirst for validation, not just in German expressionistic films and Edward, but also in us as human beings. That perhaps, the most significant of of all people, are the isolated ones.