By aggressively deconstructing and scrambling the computer world, the Internet artists at Jodi have turned our world of bits and bites into an absurdist amalgamation of digital mindspray that resembles a binary MC Escher work.

Jodi.org is made up of two internet artists, Joan Heemskerk (born 1968 in Kaatsheuvel, the Netherlands) and Dirk Paesmans (born 1965 in Brussels,Belgium). They pioneered web art and further ventured into software art as well as artistic game computer game modification later on, using methods of deconstruction and de-programming. Many of their works concern the use of glitch or essentially deliberate errors to disrupt conventional flow of systems and question the user’s web browsing experience that at the same time, examines standard web structures and functionality created by corporations. Thus, triggering a new sense of awareness for the workings behind these systems. This is closely linked with the aims of the Net Art movement which they are part of along with a few other net artists. 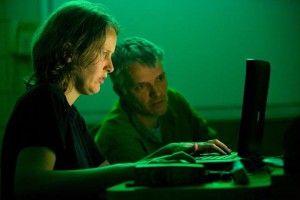 It is important to note that there is no actual official definition of  Glitch art as “Glitch art is in many ways a decentralized, active movement that evades definition” (Glitch Talk by James H. Connolly, 2013). I will be giving my opinions on Glitch art using the following works by Jodi.org as examples.

One of their early works involved the modification of the game Quake through manipulating the glitch found in a game engine such that the interior of the game becomes a swirling pattern of black and white. This makes the games look extremely distorted to the point it looks irrational and unplayable.

Every form of glitch, whether breaking a flow or designed to look like it breaks a flow, will eventually become a new fashion. That is fate. This is because of glitch’s inherently critical moment(um) – a concept I use throughout my work to indicate the potential any glitch has to modulate or productively damage the norms of techno-culture, in the moment at which this potential is first grasped. – Menkman, R. (2011) “Glitch Moment(um),” Institute of Network Cultures

Jodi.org developed this “Untitled Game” back in the 1990s when net art was still very new and so was the idea of using glitch as art. Thus, the use of glitch was able to effectively make a statement back then as glitch relies on the idea of altering familiar systems to create a new work. However, as of late, glitch art has found its way into the mainstream through the popularisation of apps that allow one to easily create glitch.

Even with the art form “Vaporwave” that uses Glitch as an aesthetic to comment on 80s corporate culture, its popularisation has resulted in it being turned into a visual aesthetic that is devoid of its original meaning. This is especially seen in the use of vaporwave aesthetics in Rihanna’s Diamonds music video and Azealia Bank’s Atlantis.

5. Realize that the gospel of glitch art also tells about new standards implemented by corruption.

Not all glitch art is progressive or something new. The popularization and cultivation of the avant-garde of mishaps has become predestined and unavoidable. Be aware of easily reproducible glitch effects automated by softwares and plug-ins. What is now a glitch will become a fashion.

A more recent work involved a four screen video installation of recordings of Jodi’s Mac desktop while she pointed-and-clicked and dragged-and-dropped so frantically that the result seemed as if the computer had gone haywire. This chaotic effect is further enhanced by the size of the projection which is larger than an average person, making the desktop look like a mad monstrosity.

This chaotic effect is further enhanced by the size of the projection which is larger than an average person, making the desktop look like a mad monstrosity.

I describe the ‘glitch’ as a (actual and/or simulated) break from an expected or conventional flow of information or meaning within (digital) communication systems that results in a perceived accident or error. A glitch occurs on the occasion where there is an absence of (expected) functionality, whether understood in a technical or social sense. Therefore, a glitch, as I see it, is not always strictly a result of a technical malfunction. – Menkman, R. (2011) “Glitch Moment(um),” Institute of Network Cultures

This particular work reflects the above sentiment as the supposed “error” in Jodi’s Mac was deliberately created by herself rather than through the actual system flaw in the Mac. With this in mind, I believe the work makes us realised how we have all become accustomed to a particular way of using our desktops such that when one uses it chaotically, we are fooled into thinking it is the act of the system rather than that of man. Thus, this deliberate break from conventional desktop usage makes us question the way we use our computers and how our digital behavior has ruled over us without us knowing.

One of their more notorious works comes in the form of a CD that when installed, immediately initiates a takeover of the computer. Personally, while this work may seem irrational and ridiculous, I see it as an important statement regarding operating systems. Keeping in mind the infamous controversy surrounding Microsoft trying to gain market dominance with its OS back in its heyday, it would be somewhat fitting to compare the installation of OS developed by corporations to the installation of viruses that takeover the computer. The only difference being we deem those by corporations as safe and good to use, unconsciously allowing these same corporations to define almost our entire net experience.

Lastly, it is interesting to note that when JODI were awarded the Webby Awards in San Francisco, they disposed of theprize immediately, calling the DotCom-audience “ugly %commercial sons-of-bitches”.