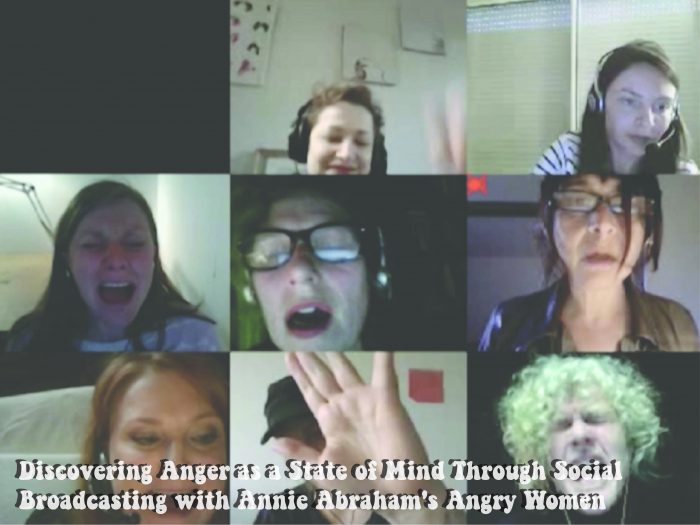 Anger as a State of Mind

Anger, an expression, an emotion, a state of mind, the heat the rises from your gut, that irritates and exemplifies when another one adds an irrelevant comment. The frowns, the screams that are associated with the deep emotion is the expression of anger. Perhaps a slow-boiling ball of fire slowly eating you up on the inside. Annie Abraham’s Angry Women has demonstrated through the Third Space, the emotions and expressions associated to the feeling of anger.

Annie Abraham’s Angry Women consists of 5 webcam videos of women expressing their feeling of anger. Each video is unique in its own ways. Take 1 & 2 is a mixture of female and male, take 3 & 4 is one where there were 24 women of different nationalities of which they get to express their anger in their mother tongues with a limit of 12 minutes, and for Take 1 & 2 the 12 women were to express their anger in an unlimited amount of time, and stops until there was no anger left in the women. In Take 5, the 9 women were able to act, getting as close to their anger as possible.

On the Third Space vs In Real Physical Life

…to be present in this universe of alone togetherness. -Annie Abraham

A remark she made on Take 3 & 4, the women who expressed their anger were without any accompaniment in in their physical space, but with accompaniment on the Third Space. The women were alone, but when they meet on webcam, the Third Space, with a click of a mouse and connectivity, they instantaneously became together. Very much similar to websites like Omegle, the platform connected these people who did not know each other beforehand to meet on the platform for the performance. I reckon it would have been much tougher if the women were to be called to express their anger in real physical life.

Having not met each other beforehand, being task to express your anger (an emotion that exposes vulnerability) to a group of people you have not met before is tough. I think there might be two responds; some women might be more reserved while some might be able to openly unleash their anger. This might be because the other women on the other end of the screen do not know who they really are. Expressing their anger through social broadcasting, they are offered a assumption of acceptance as the women are still on the line on the webcam, each taking turns to express their anger. Perhaps the stark difference shown in the way people express their anger through the webcam and in real life is that the “bad feelings become less toxic when released” on the Third Space as written in Sherry Turkle’s Alone Together. “Each takes as its premise the notion that you can deal with feelings without dealing directly with a person” that might be related to the emotions that you are feeling. Using another medium to express the anger rather than facing it head-on can be another method of anger expression today. Or perhaps people are just more irritable in this century that anger management have to be tweaked.

The subject used for the online performance stood out to me. The emphasis on women rather than men.It was researched that women and men feel anger in different ways. Women often describe their anger using words like “hurt”, but not men. Also, women’s anger after often a build-up of events. In fact, men and women lack the control over their anger as compared to the other emotional state like anxiety and fear.

Looking at Annie Abraham’s Angry/ Colère, similar to the Please Change Beliefs by Jenny Holzer, she was able to receive responses from the public about anything regarding the topic of anger. It was interesting reading the responses on the site, the rage within people. One stood out to me.

Anger is eating me, from the inside, all my life, because of loneliness and lack of attention because it is still stupid in some ways, anger is a form of stupidity and this is a limitation in consciousness. Expand our consciousness in realizing that we are all connected to anger dissolve in ourselves and in the world. Experiencing this is the highest form of art for me. Anger is studidity, and i think we are not here to be stupid. – Anonymous

Being aware of the state of anger is a limitation to the responder who felt that it is merely something in you that is eating you up slowly inside. Knowing anger is not healthy or good for you. Angry Women allowed for the anger that women are experiencing to be shared and released through the Third Space via a webcam. The solution to the awareness of anger could be to vent it all out, touching on the state of mind of being angry rather than the situation that caused their anger.

Anger as a Universal Language

But for me it was quite hard now to watch the take in French in which I almost couldn´t understand anything. So, I realised, that for me (from a spectator´s view) the content of what we are saying is not irrelevant and that understanding some bits and fragments of our talking is important.. -Martina Ruhsam

The frowns, the screams, the fists, even though they were tasked to express their anger in their mother tongues, the frustration can be felt nonetheless. There might be a language barrier, yet the anger expressed is a universal language to all. With the instilled visual literacy in all of us, we could interpret the actions of the women to associate them with anger expressed.

At the end of their expression of anger, I am taken aback by how the women were liberated with joy and how they responded by woo-ing and having smiles on their faces. Perhaps the real solution to it is to directly approach the state of mind, rather than the situation itself, being angry.

Annie Abraham’s Angry Women has just opened our eyes to the human reaction to exposing our vulnerabilities through social broadcasting and the state of mind of being angry She successfully explored and “study human behaviour without interfering in it.” Looking it in a bigger picture, all the women in the videos had help one another in a certain way to “be there for them” to vent their anger.

..it’s the effort of a group of people solving a problem collectively. -Annie Abraham

Trapped to Reveal – On webcam mediated communication and collaboration.

Visual Literacy in Teaching and Learning: A Literature Perspective

Alone Together by Sherry Turkle