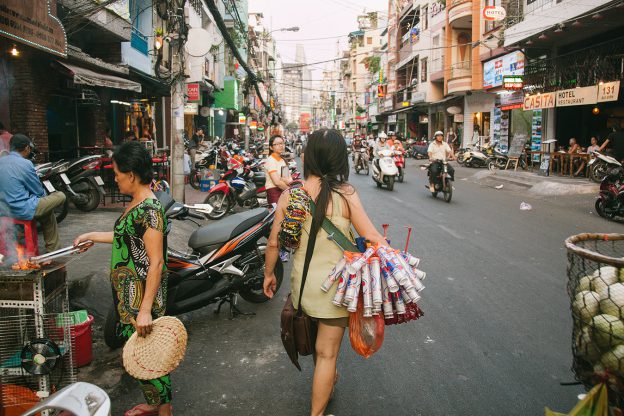 I never realize how a sidewalk could be an important identity of a city, or a place until I read this passage. As I was imagining HCMC through the eyes of the author, I was reminiscing the sidewalk of the city Bandung in Indonesia. The sidewalk of a road called Cibadak is well-known for the night food vendors. And indeed, their existence has added irreplaceable color to the tourism of the city as well as the life of the people. It was pretty sad when a lot of the vendors have to move in into a special vendor space, near the original street but not at the sidewalk, but under a building. It feels different. It feels just like any other food court. I am thinking, did Singapore has any of this sidewalk scene too? I think Lau Pa Sat could tell a little bit of this story about Singapore sidewalk. At night, Lau Pa Sat ‘expands’ their satay vendor stalls to the street, where people would eat satay at the sidewalk. I think this is a reenactment of the past. I was there once, and it is very nostalgic but out of Singapore. Modernity of a city, if being ‘let loose’ like a wild dog, would kill the essence of what made the city. Modernity indeed often kills identity, because modernity in Asia is actually about following what the western culture perceives as good. it is like copying someone else’s identity.