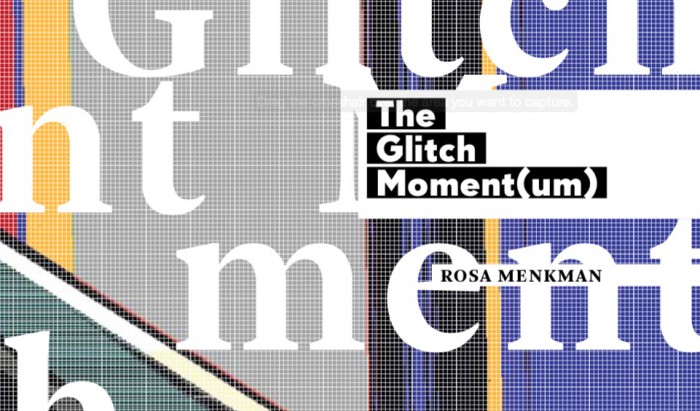 Was introduced to this reading in Internet Art & Culture class. Rosa Menkman is a Dutch artist who is specialised in glitch art. She is also a theorist, specifically in the area of glitch art, so this piece of writing is a key reading for my project.

Some relevant points for my research:

brief history: the notion of glitch art was just crossing over from sound culture, and leaking into visual art cultures only sporadically. The bugs Goto80 used gave a very specific texture to the sound (the result of noise artifacts) and I began to develop and recognize visual equivalents to this process. I found more and more artifact-based correspondences between audio and visual technologies, such as compres- sions, feedback and glitches.

the collapse of pal (2010): I tried to underline that there is more to glitch art, and more at stake, than just design and aesthetics. The work addresses themes such as planned obsolescence, built-in nostalgia, critical media aes- thetics and the gentrification and continuing development of a glitch art genre.

definition of glitch according to rosa: I describe the ‘glitch’ as a (actual and/or simulated) break from an expected or conventional flow of information or meaning within (digital) communication systems that results in a perceived accident or error. A glitch occurs on the occasion where there is an absence of (expected) functional- ity, whether understood in a technical or social sense. Therefore, a glitch, as I see it, is not always strictly a result of a technical malfunction.

relationship between technical and metaphorical or cultural dimensions of glitch culture. Focusing on the glitch within this broader perspective makes it possible to think through some of the more interesting political and social uses of the glitch within the field of digital art.

Moreover, glitch transitions between artifact and filter, or, in other words, between radical breakages and commodification.

2. Dispute the operating templates of creative practice. Fight genres, interfaces and expectations! Refuse to stay locked into one medium or between contradictions like real vs. virtual, ob- solete vs. up-to-date, open vs. proprietary or digital vs. analog. Surf the vortex of technol- ogy, the in-between, the art of artifacts!

4. Employ bends and breaks as metaphors for différance. Use the glitch as an exoskel- eton for progress. Find catharsis in disintegration, ruptures and cracks; manipulate, bend and break any medium towards the point where it becomes something new; create glitch art.

5. Realize that the gospel of glitch art also tells about new standards implemented by corruption. Not all glitch art is progressive or something new. The popularization and cultivation of the avant-garde of mishaps has become predestined and unavoidable. Be aware of easily reproducible glitch effects automated by softwares and plug-ins. What is now a glitch will become a fashion.

.gif + dither: Graphics Interchange Format is a bitmap image format that supports 8 bits per pixel. This compression can therefore consist of no more then 256 colors. The format supports animation and employs dither (a grain or block artifact). Dither helps to prevent images from displaying or transforming into large-scale patterns such as ‘banding’ (a stepped process of rendering smooth gradations in brightness or hue).

what happens to glitch? However, if the cause of the glitch remains unknown, the glitch can either be ignored and forgotten, or transformed into an interpretation or reflection on a phenomenon (or the memory there- of) defined by a social or cultural context (conventions, histories, perspectives) and the technology that is malfunctioning.

humanizing errors: A glitch represents a loss of control. The glitch makes the computer itself suddenly appear unconventionally deep, in contrast to the more banal, predictable surface-level behaviors of ‘normal’ machines and systems. The glitch has become a new mode; and its previous uncanny encounter has come to register as an ephemeral, personal experience of a machine.

accident of art: Notions of disaster, aesthetics of failure and accidental events have been integral to modern and contemporary art, Avant-Garde progressions and turnings.

cultural meaning: Virilio argues that although many people encounter ac- cidents as negative experiences, an accident can also have positive consequences. The accident doesn’t only equal failure, but can also ‘reveal something absolutely necessary to knowledge’. The accident (and thus the glitch) shows a system in a state of entropy and so aids towards an understanding of the ultimate functioning of a system. This opens up space for research and practice, and the arts are a special domain for this. Dadaists and Surrealists cannot be understood without World War 1. Virilio explains how WW1 blew reality into pieces and how the cubist painter Georges Braque collected those pieces and put them back together, not just as a formalist experiment or as a destruction of perspective but as an artistic realism appropri- ate to the techno-cultural present. Thus, many artists could only use some (destroyed or mutilated) form of figuration. This understanding leads Virilio to conclude that in the art of the accident. In the digital realm, what has come to be known as glitch art deals with the digital dimension of error, accident and disaster from different angles, within a larger context of cultural meaning.

defining glitch art?  Their destructive or disfiguring processes have no technological name, definition or explanation (yet). For this reason, it is necessary to not only define and categorize glitch at technological levels, but also to look closely at how specific media are exploited on a more complex techno-cultural level.

inherent openness of glitch as a concept makes glitch art difficult, if not impossible, to define.

Design-driven glitch art has tended to be referred to as artificial or ‘glitch-alike’. Iman Moradi has gone so far as to develop a true-false binary to deal with these matters of glitch imitation, which he explains with the following statement and schema: Because of the intrinsic nature of this imagery and its relation to pure glitches, both in terms of process and viewer perception, I felt the need to form a word that adequately describes this artifact’s similarity with actual glitches and present it as an obviously separate entity. Thus the term “Glitch-alike” came about to fulfil this role. […] Glitch-alikes are a collection of digital artefacts that resemble visual aspects of real glitches found in their original habitat.

intentional faux-pas: They challenge the ideological aspects of proprietary design by misrepresenting existing relationships between specific media functionalities and the aesthetic experiences normally associated with them.

You cannot prohibit the catastrophe, you must surf it!11

the perfect glitch: The perfect glitch exists, momentarily, at the shocking tipping point between (potential) failure and a movement towards the creation of a new understanding. The glitch’s inherent moment(um), the power it needs or has to pass through an existing membrane or semblance of understanding, helps the utterance to become an unstable ar- ticulation of counter-aesthetics, a destructive generativity.

built-in obsolescence and pop culture: technological progressions causes built-inp obsolescence. things are designed to last x number of years before they become obsolete. I would like to argue that this economical reasoning is very much connected to the growing fetishization of nostalgic imperfection in (glitch) art, which over the last decades has become a kind of conceptual virus. Today it is completely normal to pay extra money for aesthetically appealing plugins like Hipstamatic or Instagram, that imitate (analogue) imperfections or nostalgic errors, like ‘faux vintage’ lens flare and lomographic discolorations.