Do It With Others (DIWO), is a concept of the extension of Do-It-Yourself (DIY), except here, you are engaged with other members under a common platform to generate collaborative development. Essentially,

“Do It With Others aims to provide a collaboration platform for individuals and businesses seeking help or participation from a generic audience and specialists to achieve a specific goal or objective.”[1]

The idea of (DIWO) was first introduced by Furtherfield in 2006 as a term to represent the ‘collaborative approach’[2] where members come together and make a like-minded community to create content for a common purpose. This practice of DIWO fundamentally allows expertise and experiences of different members to combine to form the hybrid creation. 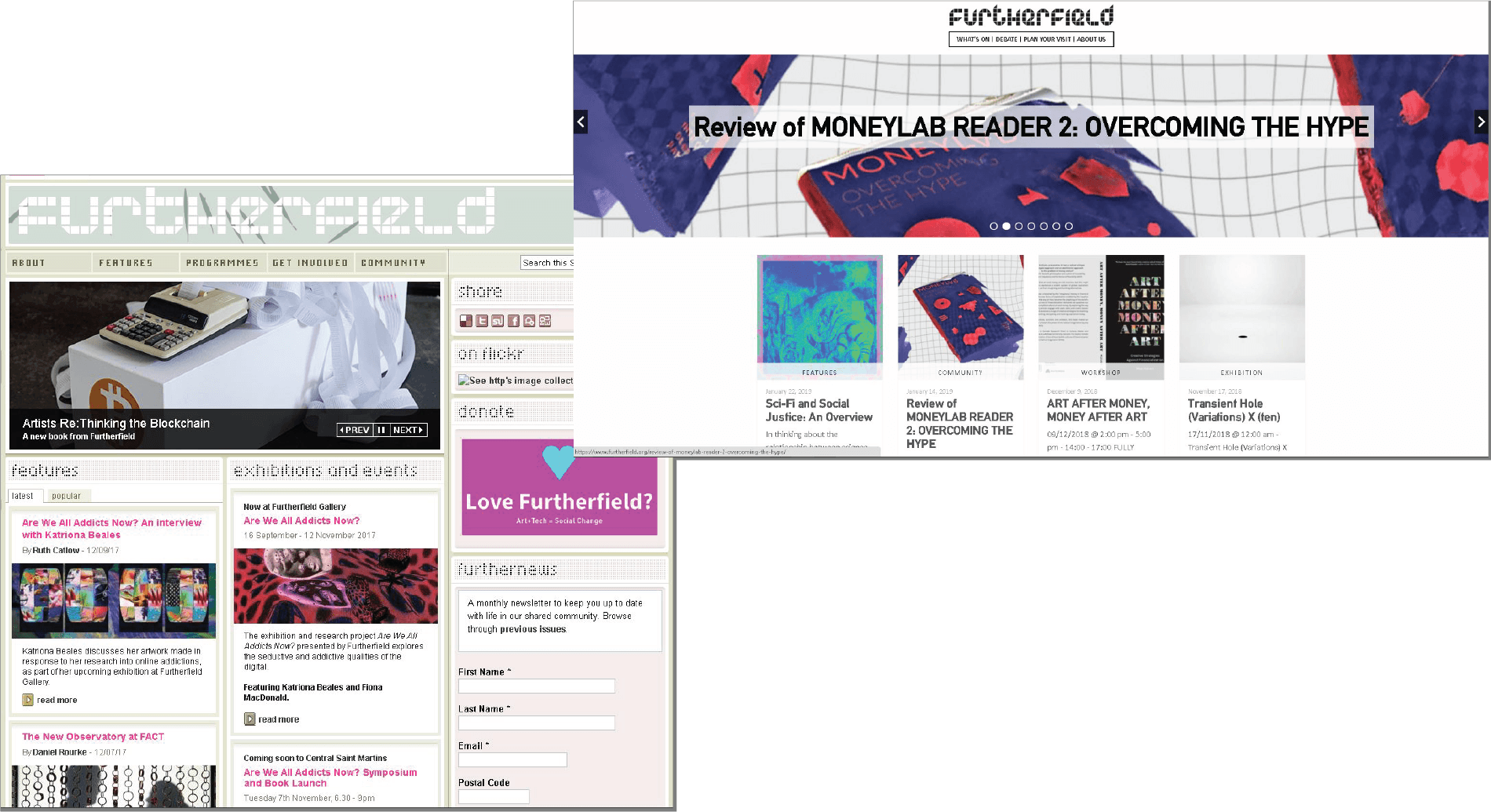 Furtherfield integrates DIWO into the process by harnessing the internet to interact through connections to discover and share knowledge through the use of art. It is achieved through a virtual space or physical environment which would be supported by the network to raise awareness of certain topics. This makes sense to me because the internet does not have as much restriction and constraints as the real-world environment. Works are not constrained to museums and exhibitions, where certain limits are already imposed on the creator even before the work is started. For example, an installation has to be confined within the limited space and the limited opportunities for peer to peer interactions. Without the DIWO concept in Furtherfield, it would eventually be buried by the main players – in the context of this case, Saatchi and Saatchi, a powerhouse in the advertising industry. 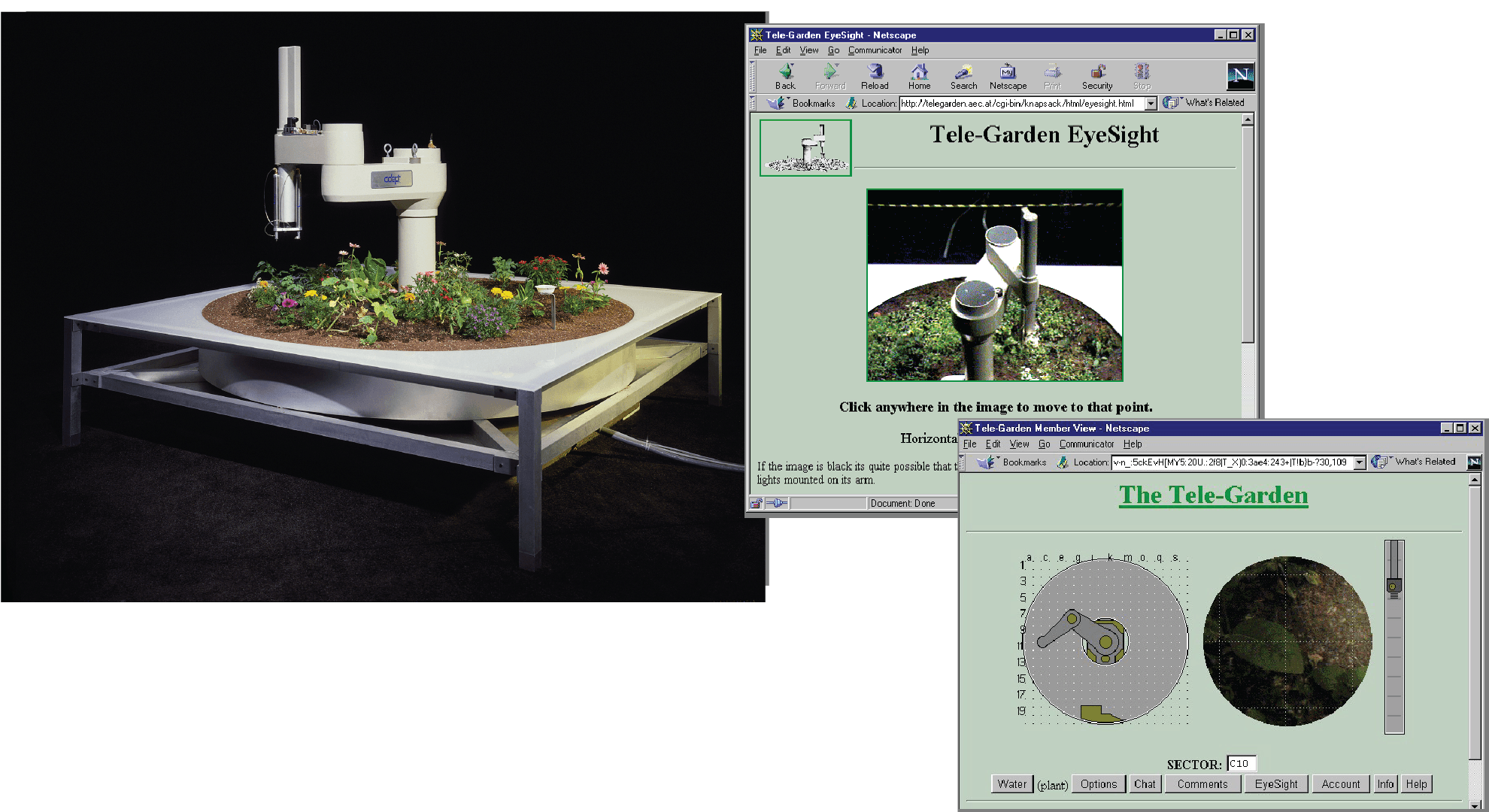 Image extracts from the archives

Next, I look at the relationship between DIWO and The TeleGarden. Even though the TeleGarden was created without the concept of DIWO in mind, it became a core function of how the system works. Participants of the work contribute to this common platform via the net, building this ecosystem while generating discussions through an online portal. It is exactly like a community garden in the physical world, and the communities it creates. An extract from the TeleGarden log archive states

“The system is developing quickly. At first one felt quite alone in the garden because of the way the system interleaves the users, leaving each in his own world, unaware of the motions of the others. Now, with the user position views and the “village chat” feature, it feels more like a community.”[3]

This is due to how the action of gardening has always been an individual act, where only through conversations and interactions between two members that the community grows to help each other. And like in many DIWO projects, the end product of the TeleGarden is unpredictable, conditioned to the choices and decisions made by all members of the community in its development.

Both projects are different as compared to conventional works created by artists and designers because of the difference in control held by the creator. In almost all conventional works, the creator has full control over how the work will turn out. In the case of Furtherfield projects and The TeleGarden, the creator provides the platform for the work to be shaped by its contributors, who are also the viewers. The concept of DIWO ultimately warps the sense of predictability of the outcome, which also often creates a much deeper narrative that represents the community intentions and motives. Sometimes with quite unexpected and maybe not so positive results such as;

Lastly, I would like to seek out the present applications of DIWO, and the output it gives.

There is VRCHAT, an online virtual reality video game where you can create your own instanced worlds which you interact with other players through virtual avatars. The game also gives the players the ability to develop their own characters into the game. The players can then interact through activities such as hosting open mic night, collaborative drawings, dancing with VR gear.

It spawned media such as talk shows and podcasts dedicated to the discussion of the game. It had also given rise to the meme of “Ugandan Knuckles” in popular culture.

This is just one example of DIWO in game design, which brings the point of how the concept of DIWO in games benefits the gaming industry through the communities it formed. That is why DIWO shows that the strength of a collective group of people often far exceeds the abilities of an individual to create meaning, just like the intentions of Furtherfield. That is why essentially, DIWO make the applications fun to participate.