Introduction
As audio and visual have dominated most of our digital lives, for this Device of the Week on Senses, I was researching for works that revolve around the exploration of translating the other remaining senses through interfaces (touch/ smell/ taste), just to see what has been developed by the bold and knowledgeable gods/goddesses of tech and programming.

I came across a few projects on smells and touch, and while I was impressed, I felt these works were the relatively predictable/ easier next steps up from audio-visual (touch = motors and pulses, smell = sprays and chemicals). I felt taste was one that was the most difficult to translate, as it was so personal and so progressive in its individual experiences. Thus when I came across a project, Digital Taste Interface, I was drawn to find out more. 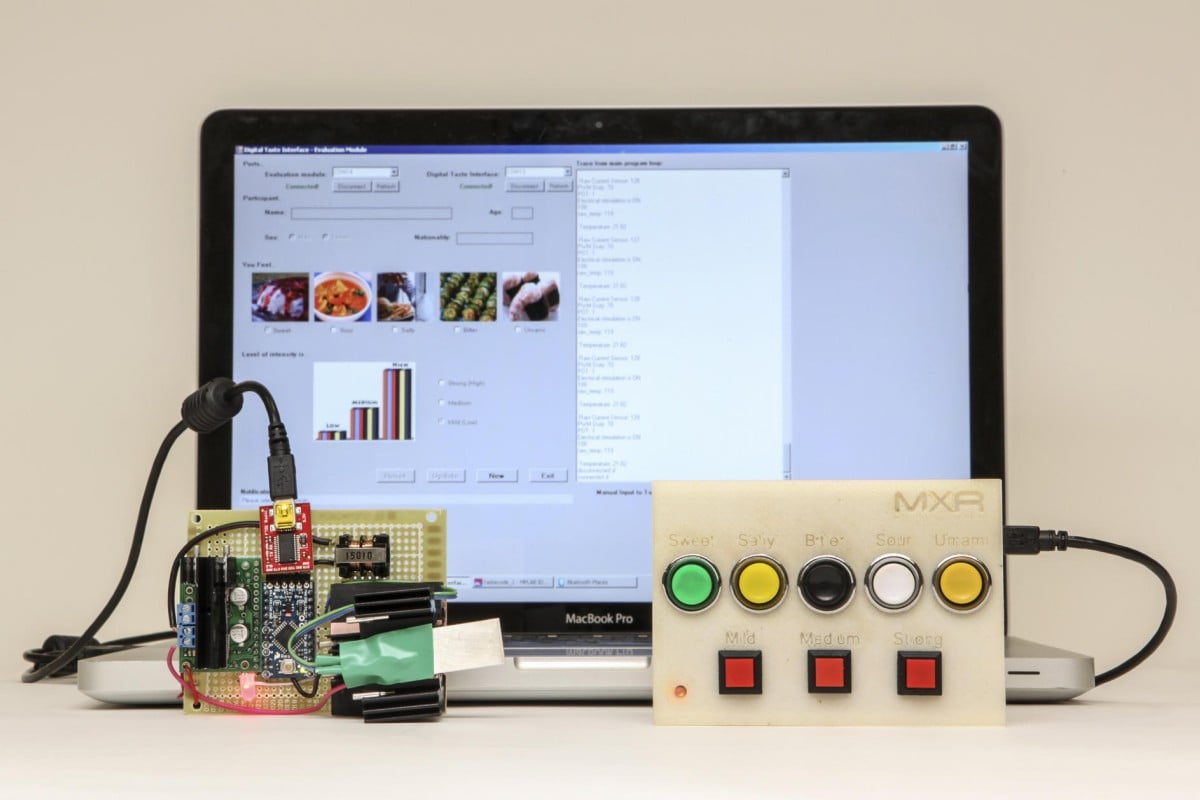 About the Device
To my happy surprise, Digital Taste Interface was developed by a team of researchers, led by Nimesha Ranasinghe for his PhD Thesis, from the National University of Singapore back in 2012.

How It Works
The portable and small device sits comfortably on a desktop surface, with 2 metal plates no larger than a stick of gum each and wires coming out of the back (due to prototyping nature). With little to no learning curve, users easily select a flavour by pressing the corresponding button on the accompanying controller (again, due to prototyping phase) to mimic the action of selecting a food on the digital screen. They then held the metal plates in their mouths keeping the tongue sandwiched between the 2 plates, and tasted their selection.

The device works by delivering alternating electrical currents accompanied by frequency and temperature electrical signals to trick the tongue and taste buds into being activated to “taste” a certain flavour. The device has successfully managed to manipulate the magnitude of the current waves on the tongue to trigger a combination of taste receptors to detect sour, salty, sweet, and bitter.

Below is a video demonstration of my explanation of the device in action:

As I have mentioned in my introduction, taste is a very personal and progressive individual experience that is relatively difficult to definitively replicate, thus this project, at time of writing and research, has yet to develop a combination to detect umami – the 5th dimension of flavour described to be pleasantly savoury. It is not a surprising gap though, as umami has been an elusive yet distinctive flavour that’s been argued and undecided by even the top culinary experts in the world.

Although the Digital Taste Interface is definitely not the first project in the world to explore artificially activating taste receptors, I felt it was one of the more approachable/ feasible deliveries. Preceding attempts, such as one developed a decade before in 2003 by University of Tsukuba in Japan, involved injection of chemicals into users’ mouths and slightly more invasive deliveries that were not as warmly received.

Further Information/Developments
Lastly, another aspect of this work that caught my attention was the long-term objective and forward-thinking of the creators. This device, if continued development, could be the solution to a more fulfilling dietary experience for the growing 422 million people living with diabetes in the world. Sweetness could be simulated into meal scenarios, giving these patients a relatively closer to ‘normal’ eating experience without physically harming their blood sugar levels. Cancer patients or patients who have suffered a diminished ability in taste may also benefit from this impressive work as it could help to facilitate re-training and rehabilitation of taste receptors.

The work we see here is in its prototype and proof-of-concept stage. As at time of documentation, users have to physically put in effort to hold and stabilise the device in their mouths. With further development and testing, the team hopes to integrate this device’s capabilities into a hands-free device, or metaphorically, a flavourful digital lollipop!

Pros of the Device
• Less invasive than preceding attempts
• Portable, small
• Able to activate and taste 4 most common flavours
• Allows users to taste familiar flavours of pictures on cold, digital screens
• A device that is temporary/voluntary; has to be put in or taken out manually

Cons of the Device
• Layman might not be receptive to the idea of electrical currents on sensitive tongue
• Prototype stage, not ready for long-term use yet
• Incomplete flavour charting: umami still in development to map out triggers
• A device that is temporary/voluntary; has to be put in or taken out manually

Final Thoughts / Takeaways
It’s quite scary to me, how much of our experiences, or the collective human experience, can be replicated and explained through electrical currents and chemical reactions. Even taste, something so intimate, personal, and progressive can be replicated by just a few lines of code and clicks of a button.

It makes me wonder how much of the human experience is uniquely felt by the earthly physical body, and how much of that can be replicated, perhaps into a (dystopian? utopian?) cyborg version of ourselves. That way, if that was successfully possible, we wouldn’t have to fear the slow but sure degeneration of our flesh and bone.

While works like the Digital Taste Interface remain to be highly impressive, thought-provoking, and advancing the human race, I’m unsure of how willing I am to embark on hypothetical projects like these. As a product of the digital age, I know it is ironic to still be wary of the over-domination of cold and programmed technology into our lives. I feel there may need to be a line drawn between something that can be explored and performed but not implemented for the integrity of the human experience, and something that can be used to better the lives of the living.