Imagine coming face-to-face with a blank wall that literally springs to brilliant life at your slightest touch. Suddenly, stunning, hypnotizing visuals and immersive sounds pull you in closer the more you touch, pull, prod and poke. The once cold, lifeless wall now becomes an inviting, velvety-like medium of digitally-generated life. That is exactly what artists Mike Allison and Aaron Sherwood successfully achieved with their interactive art installation titled Firewall.

Designed to represent a metaphysical barrier between the audience and the performers, the wall in Firewall, and its accompanying sights and sounds, symbolise the cyclic, transient separations of life and death.

When untouched, the wall displays dormant, vertical orange lines. Upon contact made, the lines ignite like wildfire, rippling, dancing in reaction to movements of the touch. Emotive piano music erupts from the installation, with its distinct tempo and tone responding to the pressures of hand movement across the wall surface.

Aaron Sherwood | Interactive Media Artist
Sherwood’s works focuses on being multi-sensorial. They often involve large scale installations, sound sculptures, and accompanying artistic performance. As a new-age artist, his goal is to create opportunities for the audience to explore cause and effect through the ethereal-like mediums of sound and light.

A key characteristic of Sherwood’s works is that audiences are often invited to step into the middle of these artistic systems to fully experience his works. To Sherwood, his audiences are not meant to be passive spectators, as their responses actively influence the complex systems he creates, breathing life and character into meaningful aesthetics.

You can browse more of his interactive artworks here.

THEME
The Firewall installation is originally one out of 5 multi-sensorial experiences by the creative duo for the interactive art exhibition, MIZARU. The 5 installations are meant to be experienced in sequential order. Thematically, they represent a full circle of 1. Desires (Illusions), 2. Being Bounded (Chains), 3. Destruction (Fire), 4. Birth (Water), and finally 5. Truth (Universe). 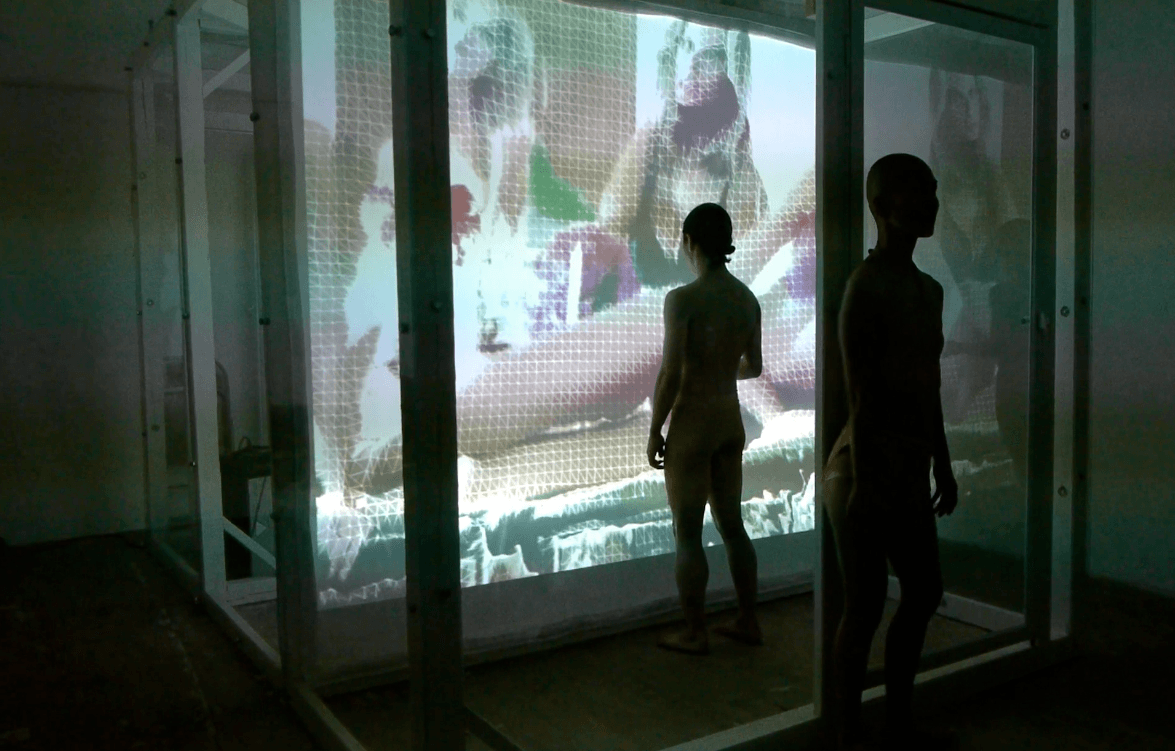 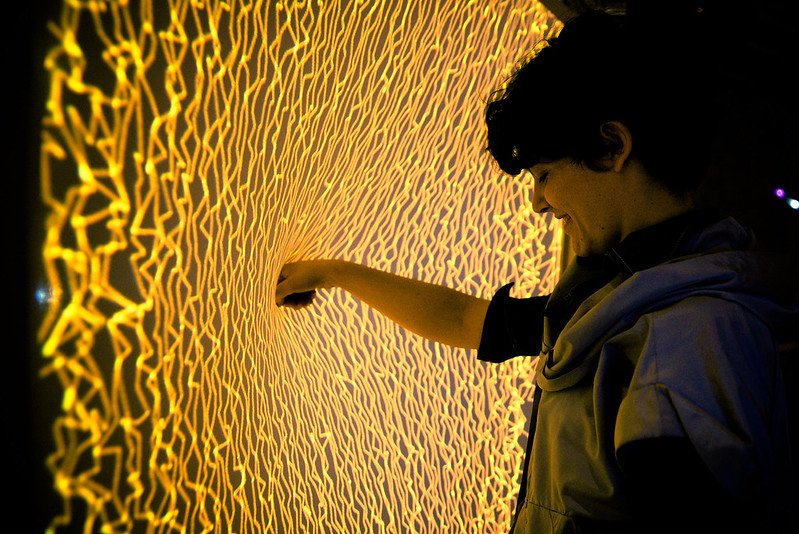 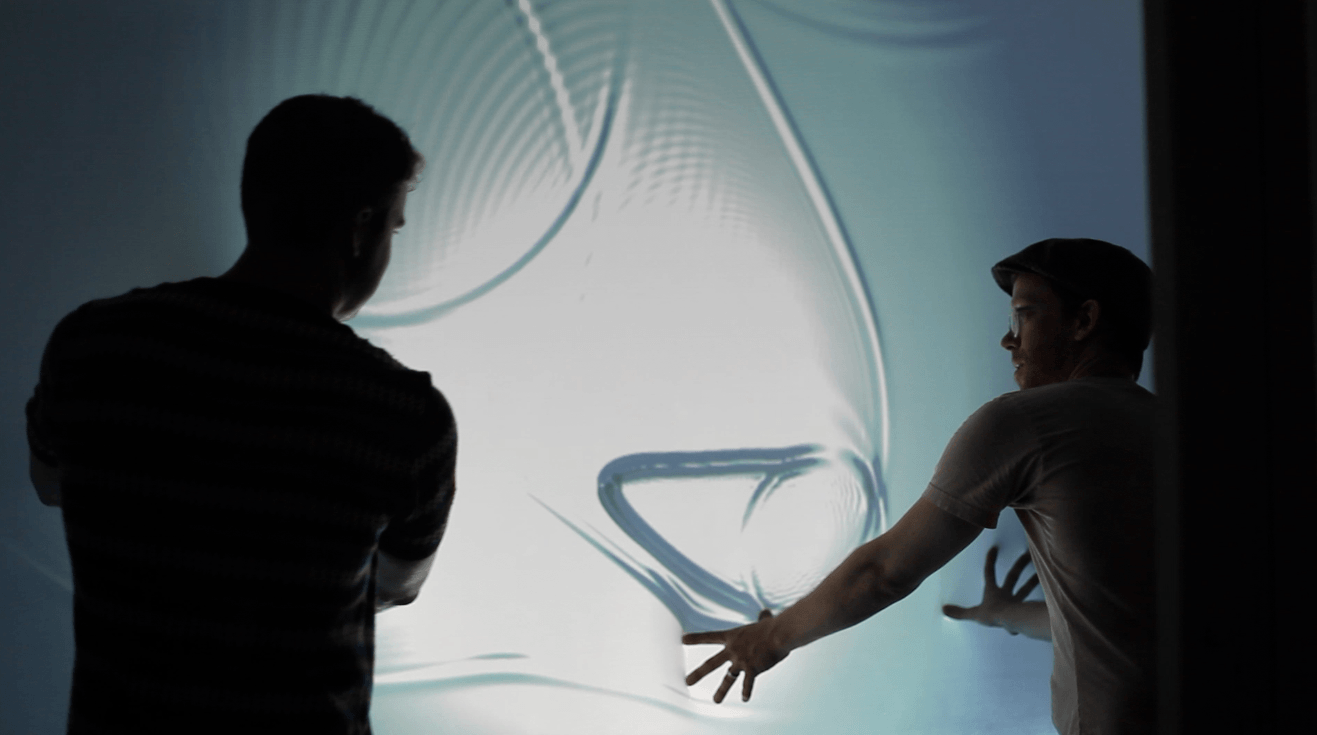 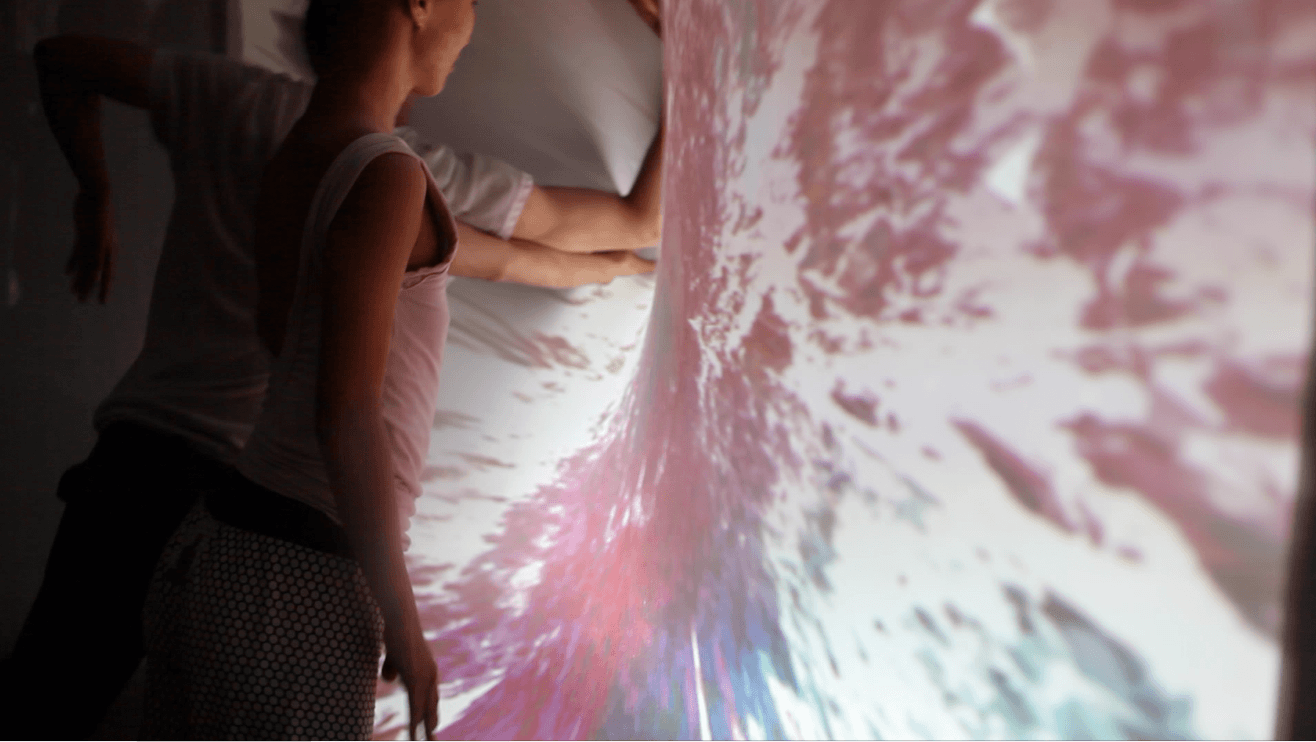 Inspired by the story of the three wise monkeys in Japanese culture named Mizaru (See No Evil), Kikazaru (Hear No Evil), and Iwazaru (Speak No Evil), the overall exhibition adopts the name of MIZARU (See No Evil). Befittingly in this creative space, the works aim to lift the veils that have perpetually enshrouded our lives, allowing an explicit look at our own mortality and hopefully inspiring audiences to become more alive in the process.

CONTEXT
All 5 installations share a similar structural feature of being a large, transparent glass box. When audiences enter the structure, they first meet a blank, white wall. Upon reaching out and touching the wall, it springs to life, generating highly sensitive and responsive visuals and sounds corresponding to the 5 respective themes, fully immersing the audience. Each time, this wall represents the threshold separating life and death.

Firewall is the third of five sequential installations, of which it is categorised under the theme of “Destruction”. The fiery installation endeavours to address the inevitable temporariness of everything experienced in one’s lifetime. Here, as fire is a universal symbol of great destruction, the artists decided to emulate its form to ignite a conceptual, poetic narrative that is constantly redefined by its patrons’ touch. As the strikingly confrontal visuals respond and adjust to the slightest touch to the hardest punch, the accompanying audio enhances the experience by gently becoming melodious or rising to deafening volumes accordingly.

According to Sherwood, “Firewall provides a very expressive musical playing experience, even for people who have never played music before.”

TECHNIQUE
In the installations, the ominous white wall is made of spandex stretched across a large wooden frame. It becomes a sensitive, flexible membrane for patrons to push and prod into to experience the varying visuals and sounds. The nature of the materials allows projection to be viewed on both sides of the spandex sheet, as well as from all directions outside the glass structure.

Firewall was made using Processing, Max/MSP, Arduino and a Kinect. The average depth of the mounted spandex is measured by the Kinect: when no pressure is applied to the spandex, nothing happens. When someone presses into the material, the visuals react around the contact point, and the music is activated. An algorithm created with Max allows the music to increase and decrease in speed and volume based on the depth of touch. Sherwood and Allison also used Cinder software to build the installations’ codes.

PERSONAL REFLECTIONS
What struck me the most about Firewall is its incredible simplicity, yet it still manages a constant feedback of being refreshing, exciting, and having a different output every time. The longevity of simple vertical orange lines exploding in changing flurries of dance and song amazes me. Despite not physically being there, and watching interactions with the installation through video, I find myself constantly amazed and discovering new experiences alongside them. As someone who studies and explores transdisciplinary mediums, very rarely do interactive art pieces amaze me, but this one obliterated my expectations. To me, Firewall is one modestly powerful piece.

I appreciate how every aspect from user experience to artistic feedback is clearly thought out and intelligently executed. Materiality is carefully considered, from the transparency that the glass box provides, to the comforting tactility of the spandex wall. Firewall leverages on user intuition and primary reflexes of touch and rewards with visual and auditory sensations — all primal, innate senses of being human, resonating so clearly with the overall existential theme of the exhibition.

Although sending a strong message by itself, having Firewall be part of a series of different thematic experiences in MIZARU clearly hones in on the messaging of going through ritualistic motions and preoccupations of mortality to finally enlightened rebirth.

Sherwood, the co-creator of the piece, operates on a philosophy that resonates with me as a creative. His works simultaneously celebrate function and form, with considerations for how patrons can influence or be influenced. The practical yet dreamlike duality of his works is the essence that I aim to reflect in my own interactive art and design pieces. Simplicity in the medium, complexity in the message.