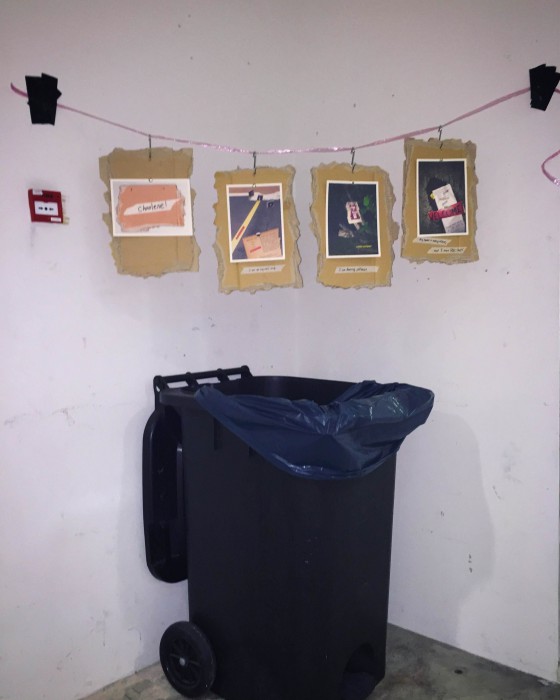 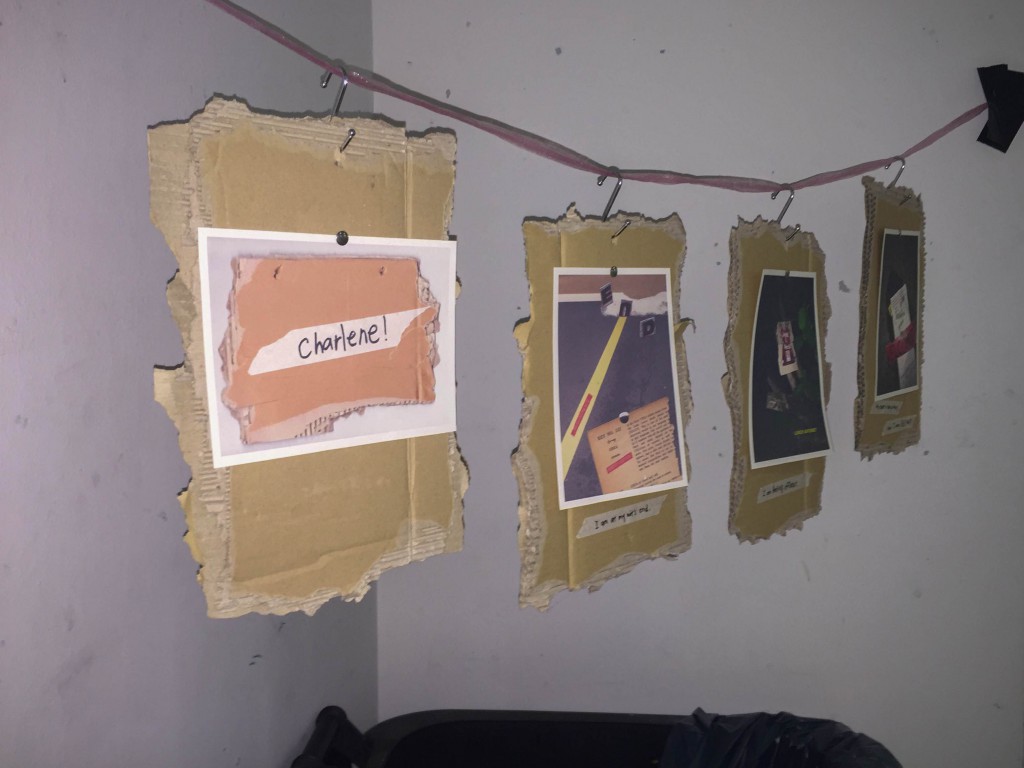 I like the contrast between the clean edges of the photo and the teared cardboard. I think you can kinda sense the dilemma I faced while doing this project. The whole time I kept asking myself, is this graphic design, is this still typography…Previously, I kinda already did include typography in my Ego assignment and I did it mostly digitally so I wanted to try handmade designs this time. The result may not be the best but I was honestly glad I tried it cause the process of doing it over and over again without thinking too much about obeying certain “rules” of design just felt really really stimulating!! 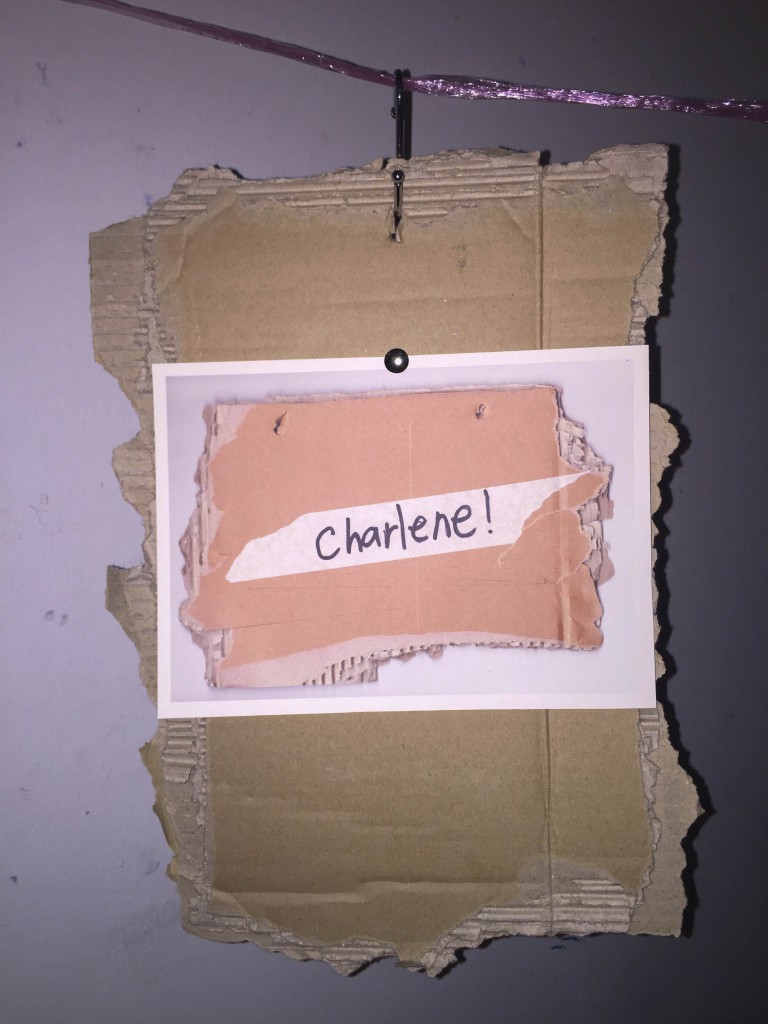 My name is Charlene & I want to be able to directly express myself.

For the first one, I admit it was the quickest one (lol anyone can do this, but its a matter of whether or not you choose to I guess hah). I wrote my name like this since I wanted it to look like when you quickly label a box or something just to tell people what its for or who it belongs to. It may seem trivial and almost ridiculous to use as typography but I still think it suitable for a typographic portrait since it relates back to that idea of quickly labelling something. You don’t think too much when you do it and you just simply write what’s in that box or what that item is. You don’t need to deliberately beautify the font since its only function is to tell people what it is. & that is how I would like to be able to express myself. 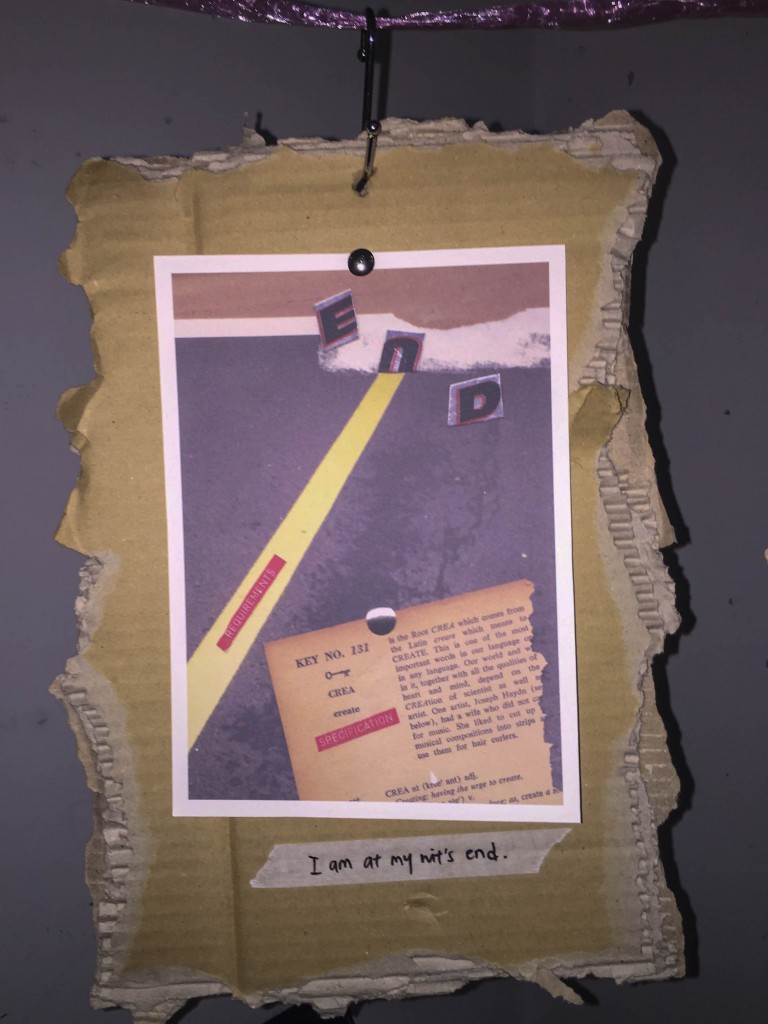 I swear the actual collage looks much better than this photo of it but damn it…A5 requirements pfft. Anyway, I came up with this the night before submission after facing a burnout when I looked at the assignment rubrics and realised I would need so much more time to do the style I wanted but still fit the A5 requirements and meanwhile I was still struggling with the whole “IS IT STILL TYPOGRAPHY” thing. So in a moment of brilliance or madness, I decided to cut up the words “requirements” and “specifications” from the rubrics and collaged it with a dictionary page on “create”. The background is a photo of a long road I took while inline skating at night (coincidentally, I tend to do this when I feel troubled). So basically, the whole idea is that I wanted to create but the rubrics “create specifications” which leads to a path of following “requirements” that leads me to a roadblock (which is why I tore the paper at the end of the yellow line) and that leads me to my wit’s “end” thus the letters END.

Side note, this is one of my most DISAPPOINTING pieces even though it probably has the strongest “design aesthetics” out of the rest. Those who knew me agreed that it was too clean for my style. 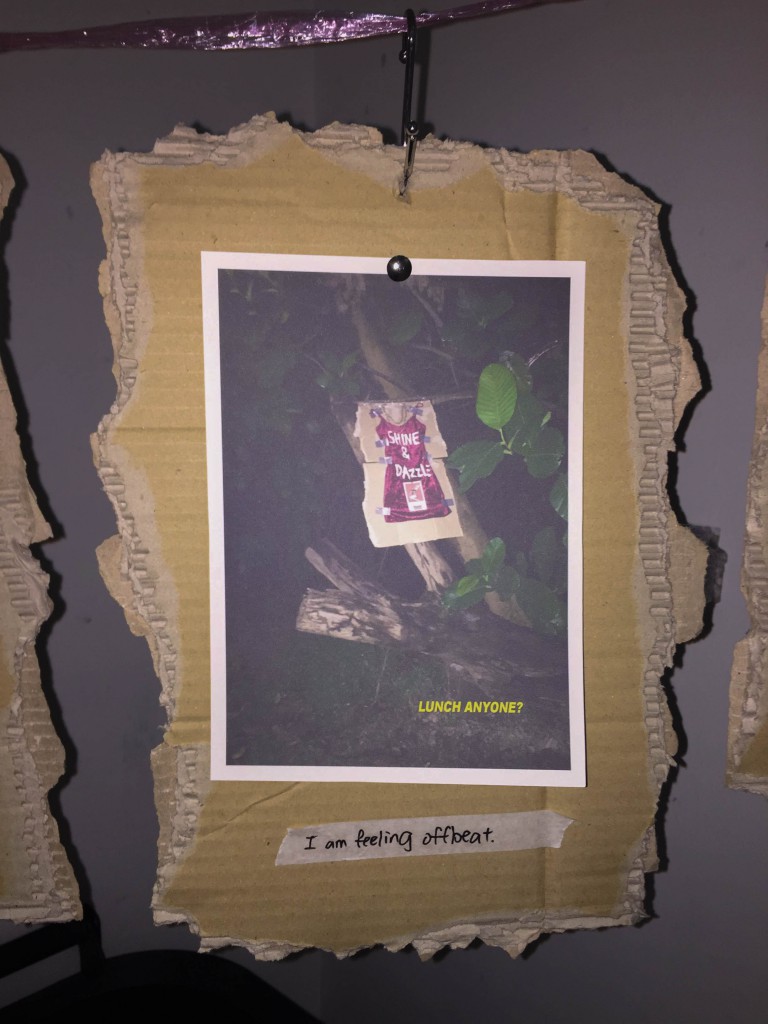 I am Charlene & I am feeling offbeat.

So yeah, where on earth is the typography you may wonder? That’s my question too lol. (can anyone still take me seriously) I started out with the idea of directly painting words on the dress and hanging it in a forest (yes it had to be a forest) and it worked with my previous concept but since I had to drop that concept due to time constraints and not wanting to half-ass it through, I had to think of how to rework it into the new last minute concept. I emailed Prof Ina and she particularly like this photo of the dress from afar and how it looked like it was floating and that it all had a David Lynch kind of feel to it. I totally agree and maybe cause I’ve been catching with old episodes of X-files recently, I just felt like I could do something really offbeat/unfitting with it. Personally, I like really offbeat stuff (which may explain why I laugh at inappropriate moments oops) and more recently, I’ve come to like it even more. The velvety red slipdress says “SHINE & DAZZLE” and its duct-taped haphazardly on a cardboard with a picture of Marilyn Monroe in lingerie stuck on it. The cardboard is hanging on a branch in a FOREST at NIGHT and the caption is really small and in yellow and it says “LUNCH ANYONE”

(IMO,or maybe in my defense lol, I still felt that I did incorporate two kinds of typography here. The hand painted words of shine and dazzle and the choice of doing it on a dress makes you think about stuff…real weird stuff…but that’s not all…its contrasted with the other phrase “lunch anyone” and and that is typed out digitally in ARIEL italics in yellow…making it stand out even though its small like a little voice whispering to you “lunch anyoneee” and you’re just there staring at that dress with the hand painted words “SHINE & DAZZLE”. The placement of hand painted type and plain digital type together is thus able to convey this strange offbeat feeling) or maybe it’s all crap and nothing matters…ha..ha…ha……….. 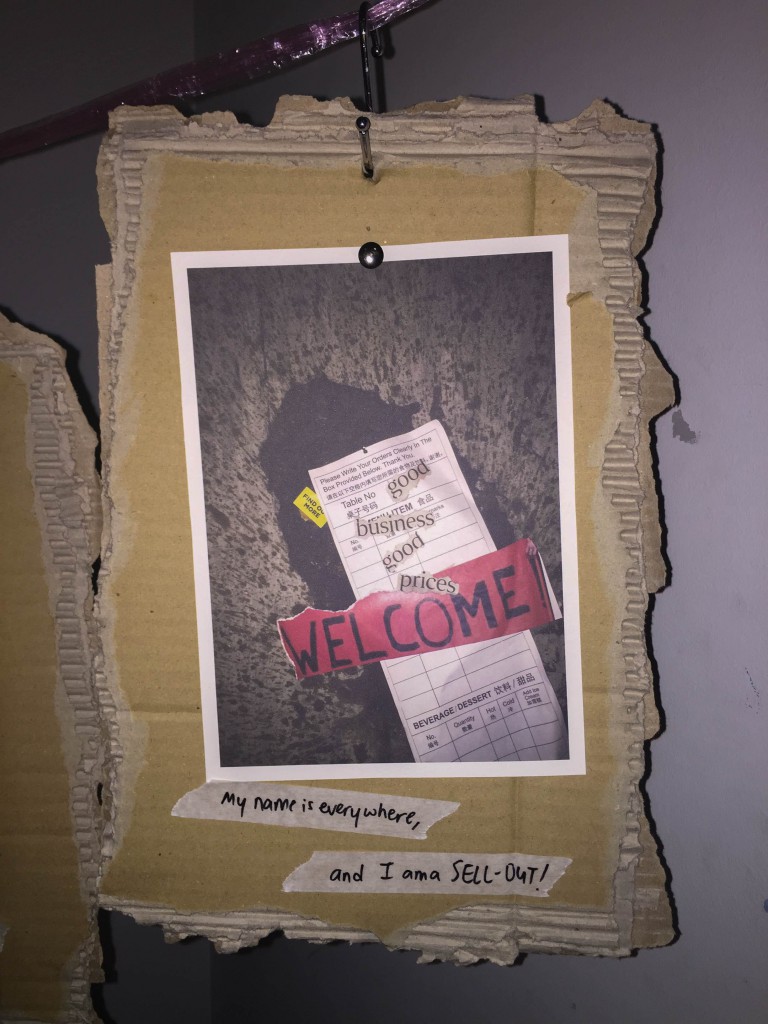 My name is everywhere & I am a sell-out.

Yeah, its a typographic portrait project but who said it had to be about you? LOL (I’m just gonna use lol a lot if not I’ll probably come off as too intense…lolllwhut) This last one isn’t about me but how I feel about some people and recent events around me. & so first question…

WHERE IS THE NAME?!

see the rust patterns shooting out in all directions in the background?? The patterns are the names. I mean, if people are like using all sorts of materials to create their names, I’m pretty sure I can use existing patterns and call it type too. Basically, if you can use materials to imitate type, I believe I can have type imitate materials too. (does that make sense?) & let’s just say, I don’t have a very good impression of these people who I deem as “sell-outs” so I don’t really think there’s much of a difference between how their name looks and these rust patterns. (oops)

Moving on, the caption is read from their perspective so its about them not really me but it could be me too since I can’t be sure 100% I won’t turn into a sell-out in the future sadly. For this piece, I was inspired by Craig Atkinson’s cut-&-paste collage pieces in which he took existing type found in cheques, receipts, air tickets and added additional stuff on that to give a new meaning. I used a menu order sheet I took from some restaurant, cut out the words “good business good prices” from the finance section of a newspaper and placed it over the order sheet. The word “welcome” came from a picture of a protest banner and I deliberately placed the words “Find out more” such that only “Find more” is seen while find “out” is hidden behind the order sheet. Basically, what I wanted to convey was the idea that these people I deemed as sell-outs were simply taking orders (order sheet) and doing what people wanted instead of doing their own thing (its easier to think of it in the context of artists especially) all for the sake of “good business and good money” and they don’t bother finding out more about art but just want to “find more” (art = $$$kaching!$$$). Thus, they’re all like Welcome!~~

BUT obviously, I’m not too pleased with this so I laid it all on this rusty plate from one of the electrical cable covers from the ground (am I being too specific hmm).

on a much more personal level, I was also affected by people thinking specifically how to get their As (appealing to Prof’s tastes and looking at what others were doing) rather than doing stuff they actually wanted to do for art. Like you need to stop treating the assignments like assignments for once and see it as your own work, if not you’re simply treating it like paperwork to get it done and over with. & trust me, if you love doing paperwork so much, you’ll definitely be blessed with tons of it in the future LOL

OKAY I SHALL STOP.

THANK YOU FOR TAKING THE TIME TO STRAIN YOUR EYES AT THE GREEN TEXT AND READ THROUGH THIS POST WHICH MAY OR MAY NOT BENEFIT YOU IN ANY WAY but hey you did it!