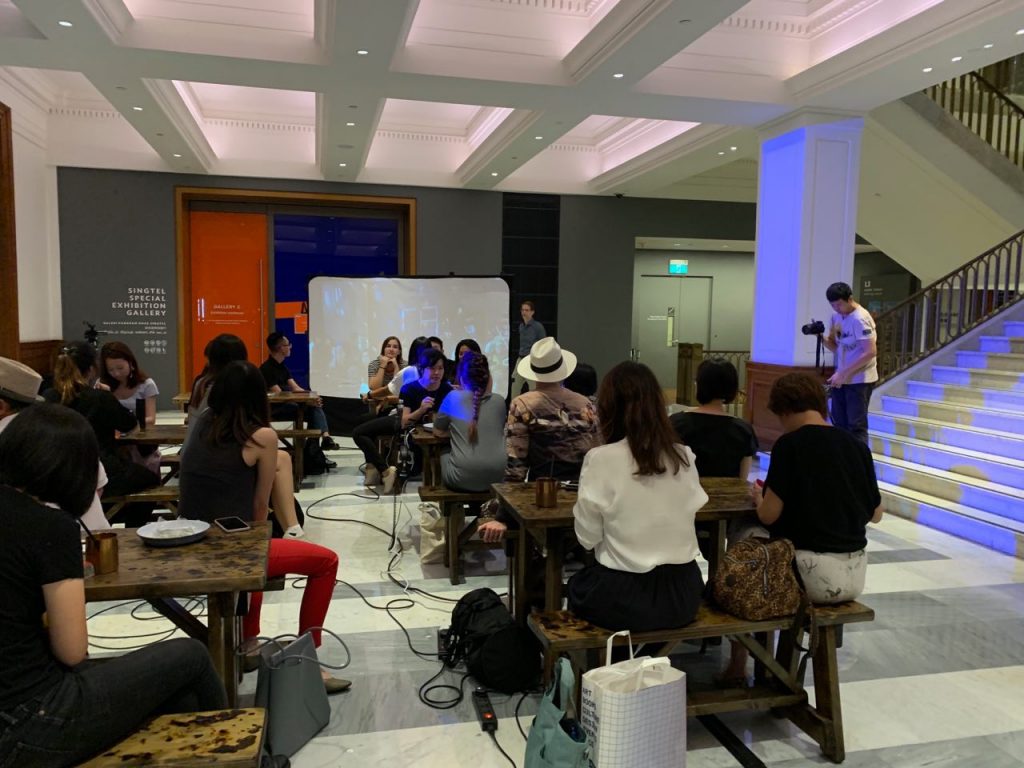 INTER-MISSION Disappearance, Bar in the Gallery is a performance of Life Circuit by Urich Lau and Teow Yue Han in a setting of seems like a Korean bar in 1943. Life Circuit is an ongoing performative project exploring how video art, music and performance and be weaved together. The overall bar setting is a recreation inspired by Lee Kang-so’s Disappearance, Bar in the Gallery in 1973.

The setting of a bar is one that is very communal and indirectly encourages interaction between the people sharing the same table. The fact that the distance between each tables is very small also helps to emphasise the idea of a shared space. I feel that this setting is supposed to provide a safe space where personal and perhaps private conversations can take place between people. However, while the setting is as such, the performance artist was walking around the area with a video camera attached to his body suit.

He was walking around expressionless and seems to be oblivious to the fact that there are other people in the area. Wherever he faces, there will be a projection of his face on the surface, even when he was facing people.

Soon after, there was another performer wearing a head gear and earphones walking around. The accessories he had one completely blocked out his essential senses like sight and hearing. He had to rely on touch to get a feel of his environment. Similarly, his actions were also very intrusive and maybe even more extreme. Given the fact that he cannot see where is is going, there were instances where he got really close to the viewers unknowingly.

I felt that the nature of the performative act by both Urich Lau and Teow Yue Han had a very jarring contrast to the warm and cosy feeling translated through the setting. It was almost as if they were blatantly intruding on the privacy of random strangers.

On the other hand, the equipments used during the performance was very high tech. I thought it reflected how technologically advanced we are today. Seeing as how Life Circuit explores how video music and performance can come together, I felt that the concepts translated really well in the performance. While they were walking around the space(performance), the artist with the head gear had his sights translated into sound. His head gear was actually a camera which captured his movements and in turn produces sound which sounded like static noises to me.

This then led me to think about how the present societal construct is where everything is so digitalised and advanced. The threat to privacy brought forth by the presence of technology is being highlighted. It is almost as if no matter where we go, we are being surveillance.