Instead of just focusing on black cats, I decided to broaden my scope and look into the issue with shelter animals in general, and the stigma against them, as some of the issues that black cats face can be applied to other animals as well.
These are the survey questions posted to the audience in order to get information for my infographic.
I focused on asking questions that can let people elaborate on, to get some insights to the situation, and allowed pet owners and non-pet owners to responds as it provides a better understanding to how people think of shelter animals compared to those sold in pet stores. 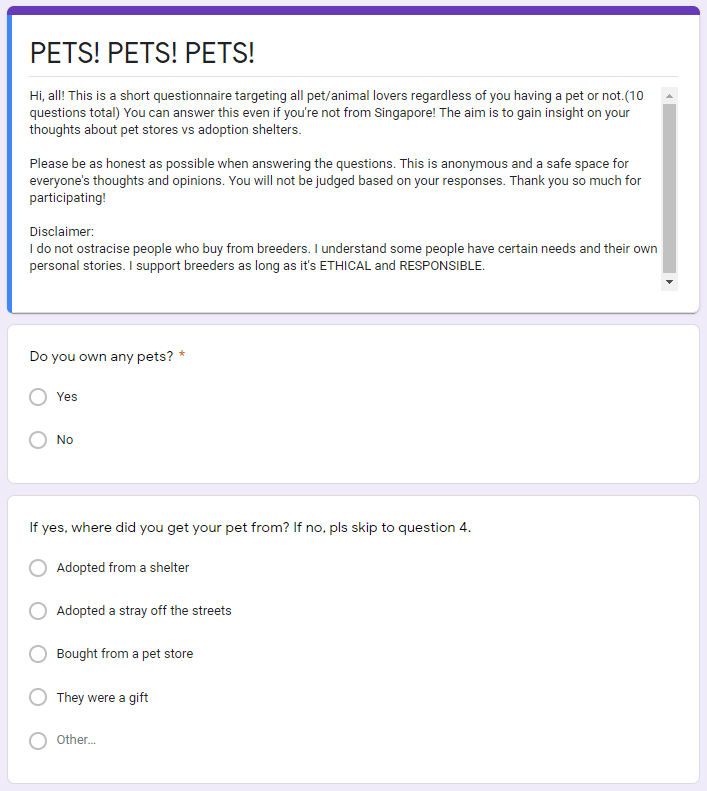 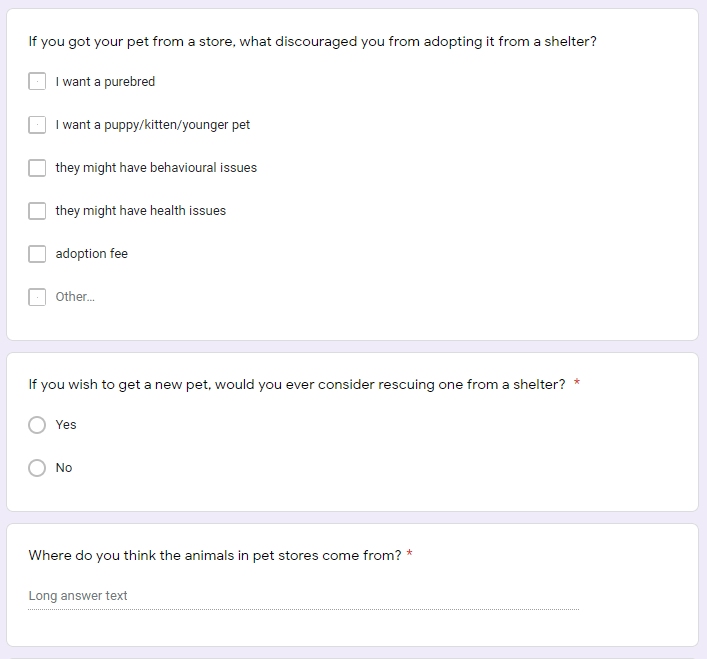 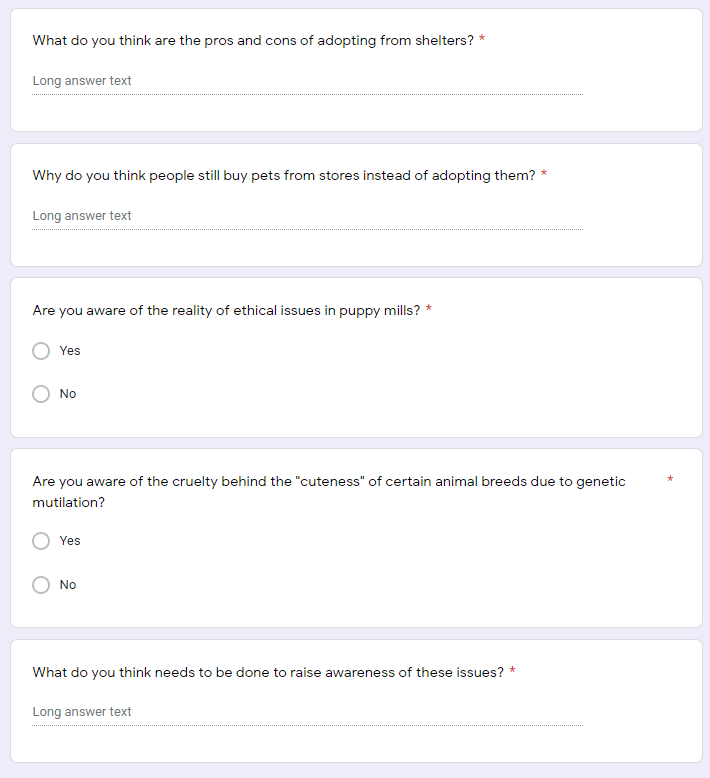 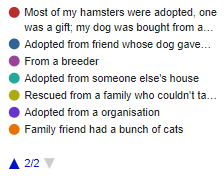 From the responses, there are a mix of ways people obtained their pets, but majority of them were adopted from shelters and bought from pet stores. 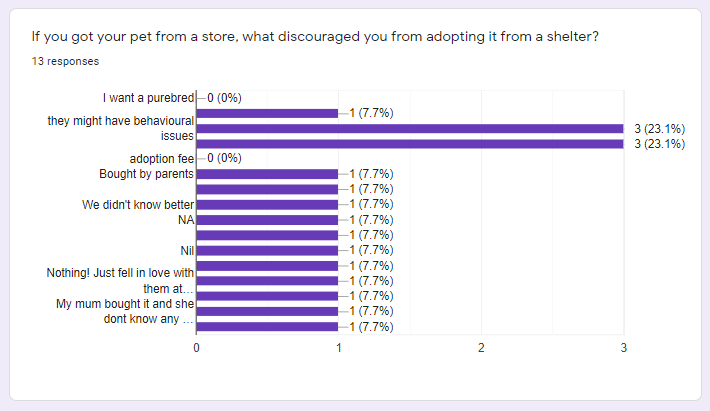 Most of the responses were under the reason of behavioral issues. That seems to be the common stereotype people have towards shelter animals.
This is not true as not all animals in shelters have behavioral issues, and you can find plenty of pets with great personalities in shelters.

All responded with Yes, meaning they understand the benefits of adopting from shelters, but it contradicts with some responses in the beginning.
It is probably due to misconceptions and perhaps the lack of information and promotion that shelters are giving out for their pets. 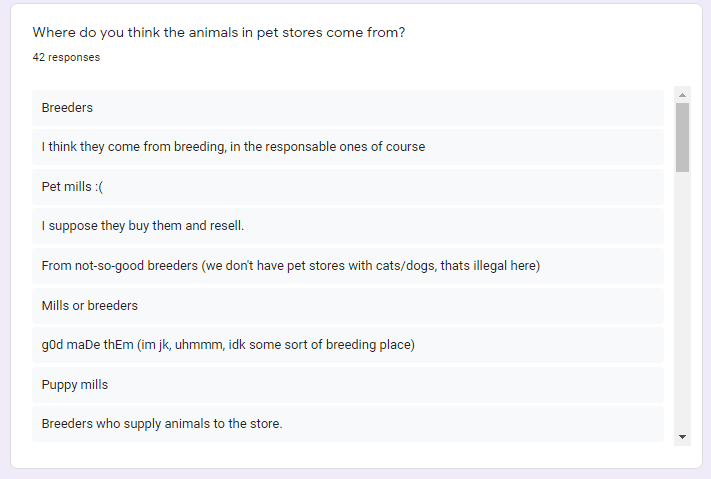 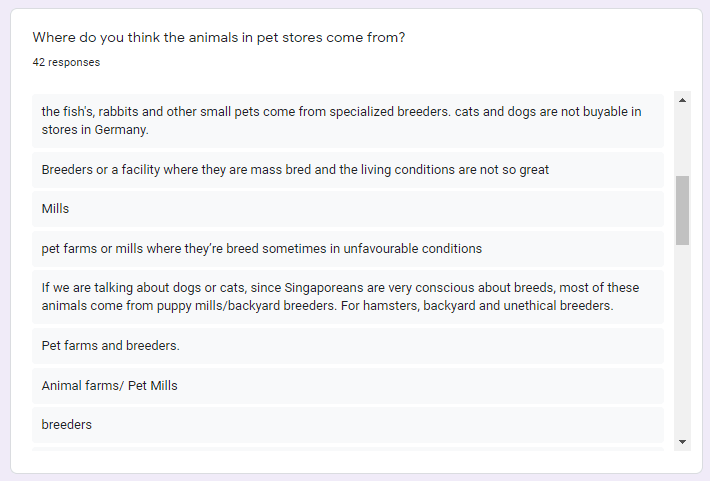 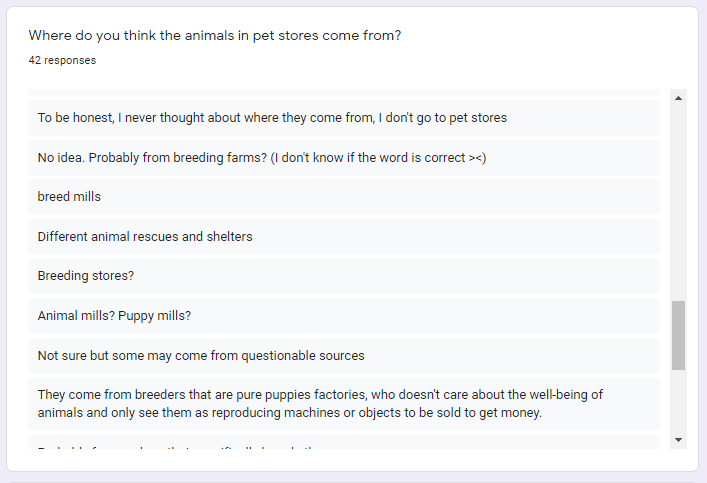 Most people seem to know what breeding farms and mills are, but some are not very sure. 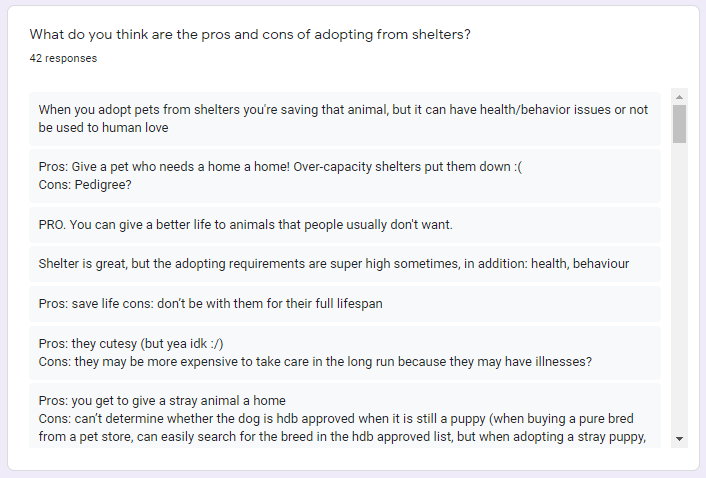 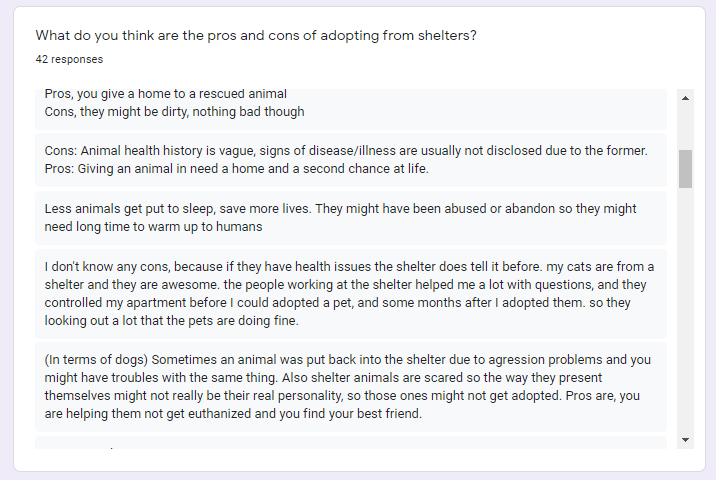 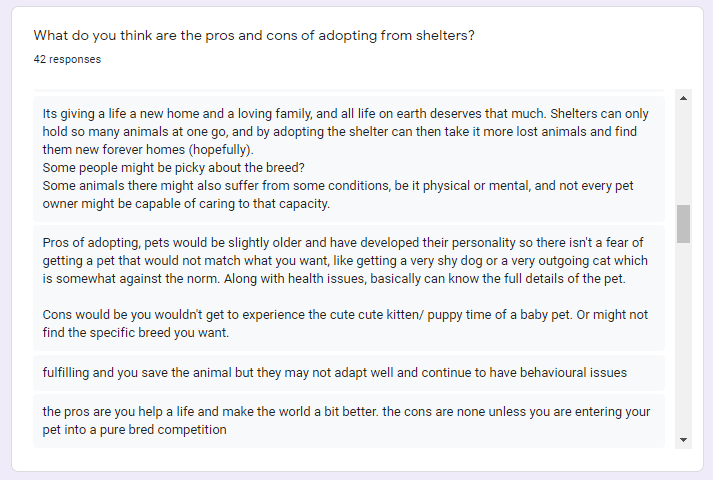 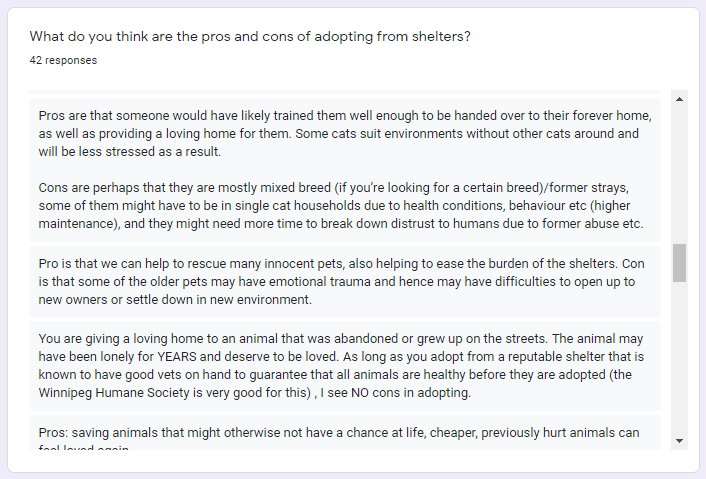 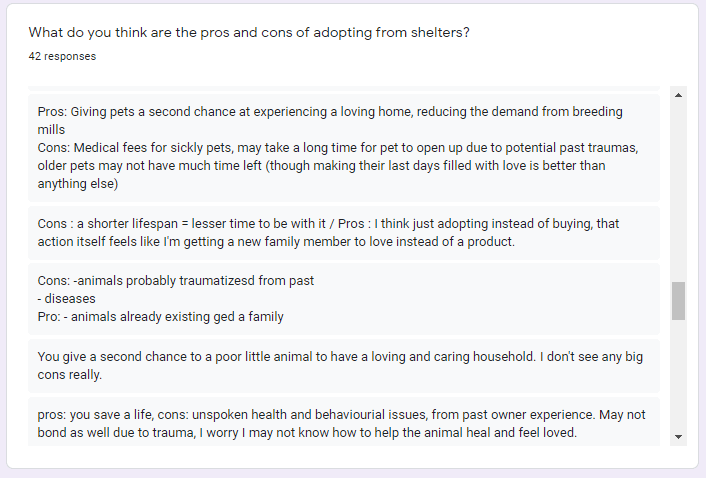 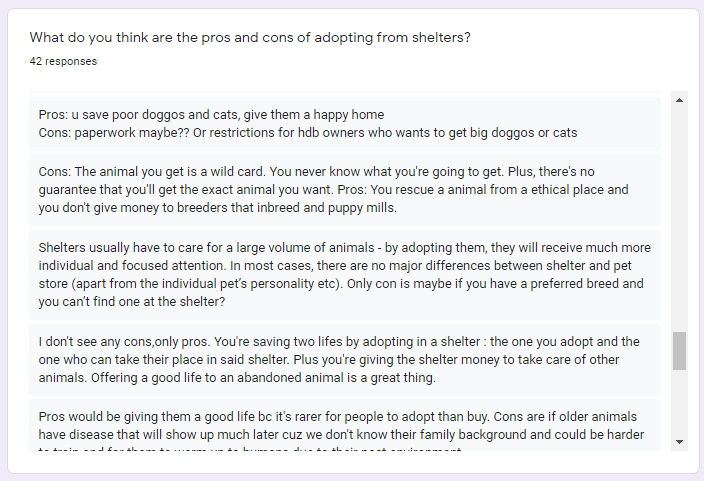 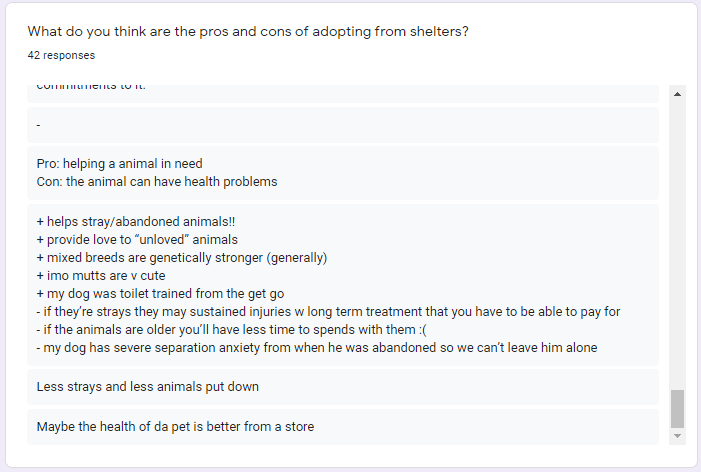 There were many good and reasonable responses for both pros and cons, but some responses are still very stereotypical, like the pet having health problems, or that the animal you adopt is going to be a wild card. Most pet shelters give in-depth information on the pet you are to adopt, so it is your duty to know the pet well before bearing the responsibility of adopting them. Health problems will most likely be stated by the shelter too, so people will be given the chance to consider. Ultimately, shelters want what’s best for both you and the pet, so that there will be lesser cases of abandonment and neglect which leads to having even more animals put in shelters. 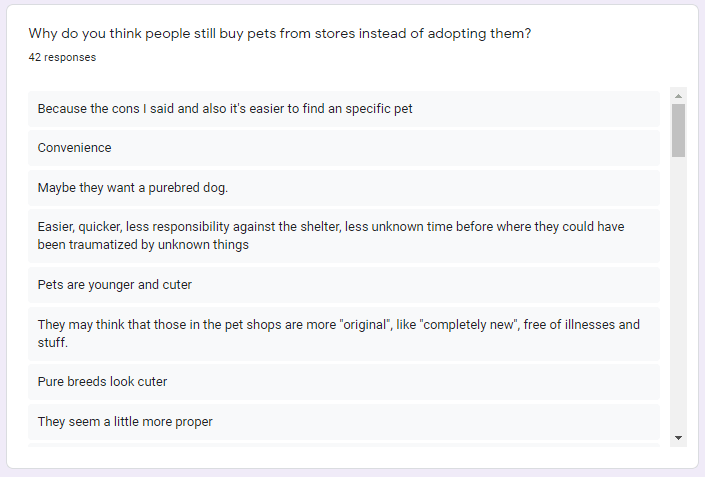 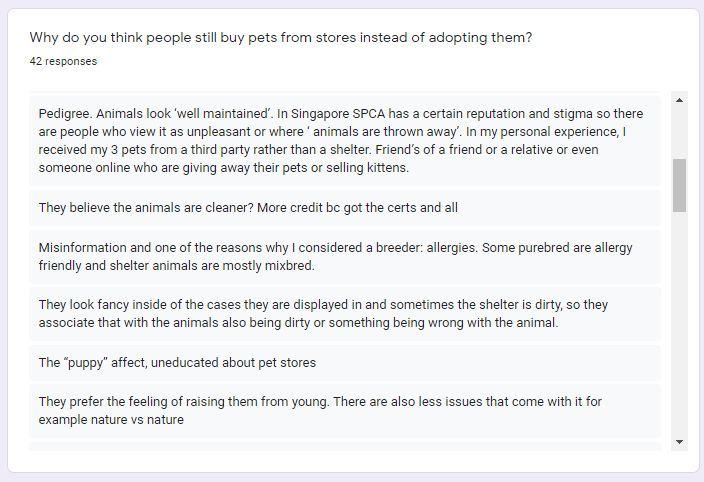 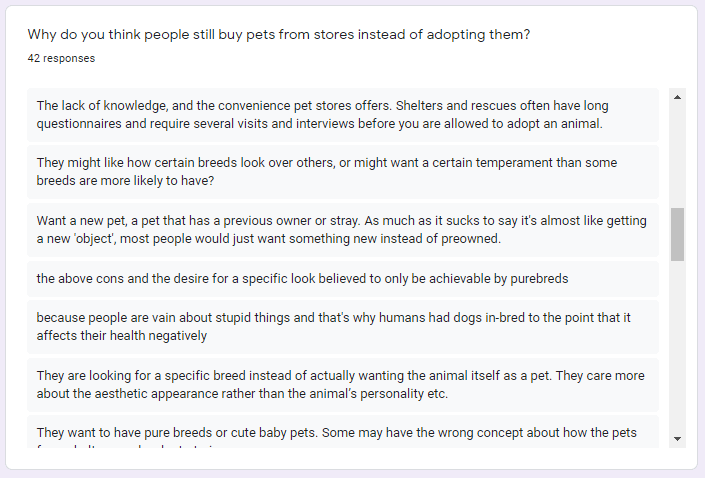 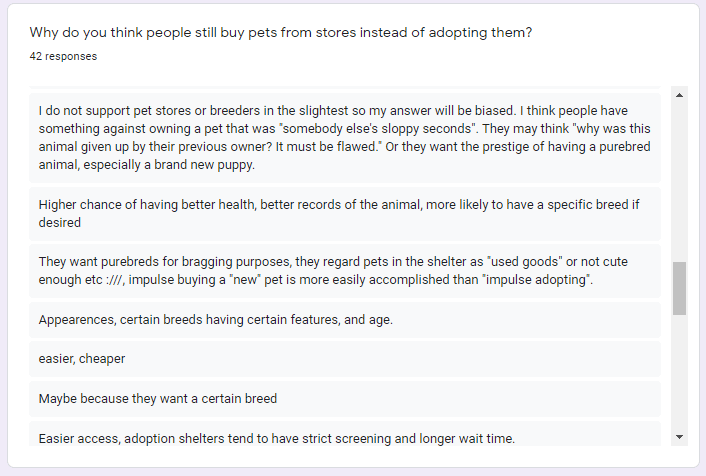 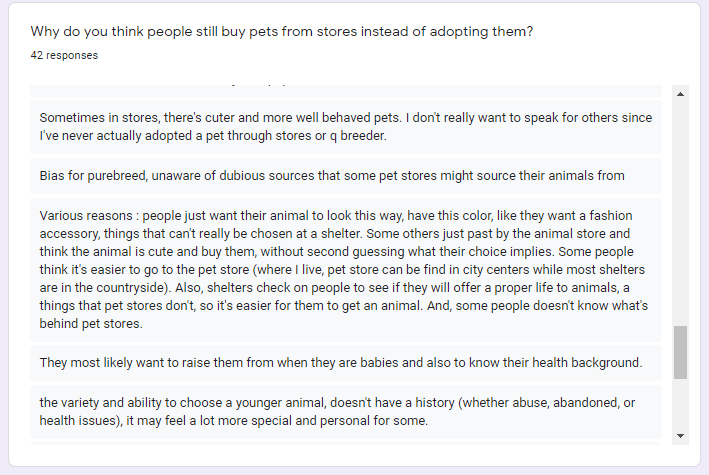 These are all reasonable and insightful responses, as it is all subjective and you cannot fault a person from wanting a younger pet so it has more time with them, or specific breeds for their individual needs or preferences. Some responses were intriguing, such as wanting a purebred for “bragging purposes” and because buying from a store is easier than adopting from a shelter, which helps assist “impulse buying”. This is an interesting take on the matter. Some responses also mentioned how some people may be ignorant to what goes on behind pet stores. Though not all pet stores and breeders are unethical, people do not seem to know the importance of researching before buying from stores as most pet stores still do get their pets from unethical breeders. 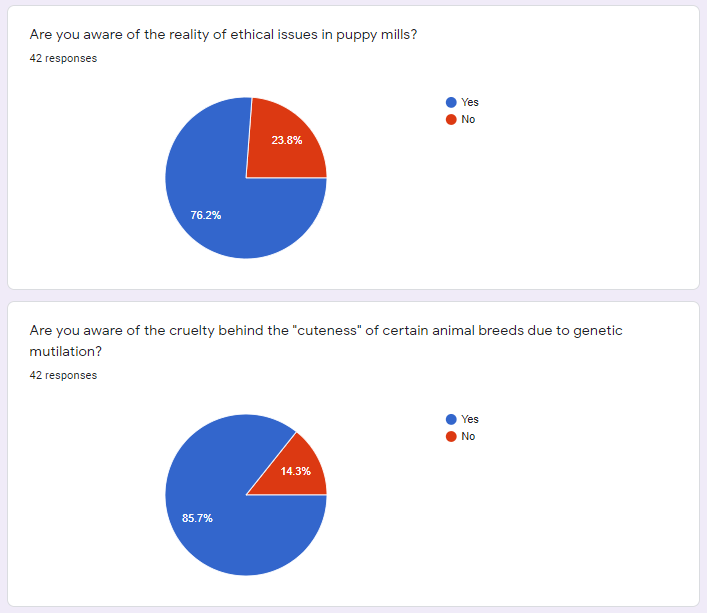 Most people seem to be aware of the issues that lie in most pet stores, whereby they get supplies from unethical breeders and mills. 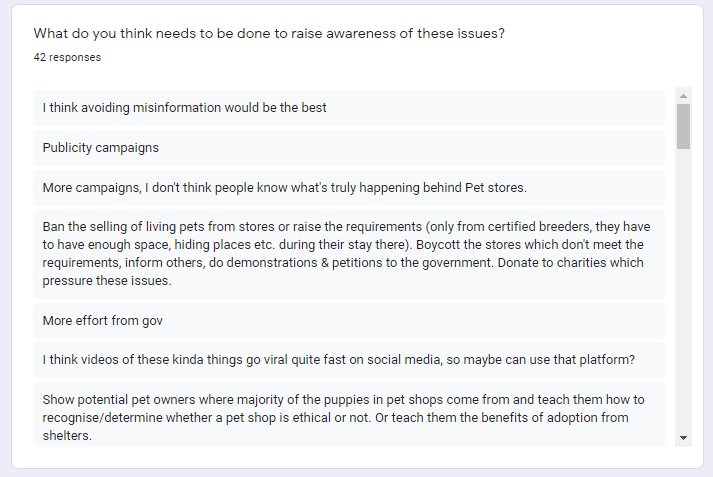 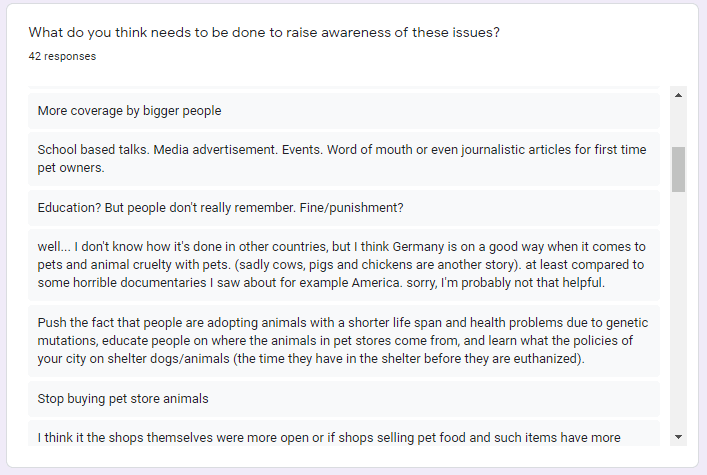 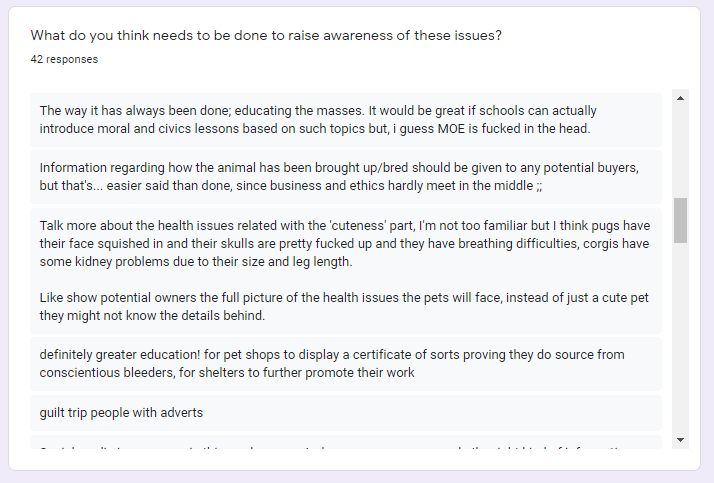 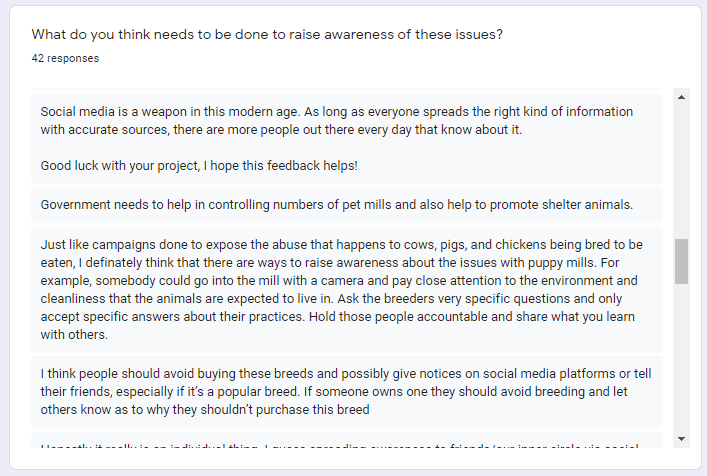 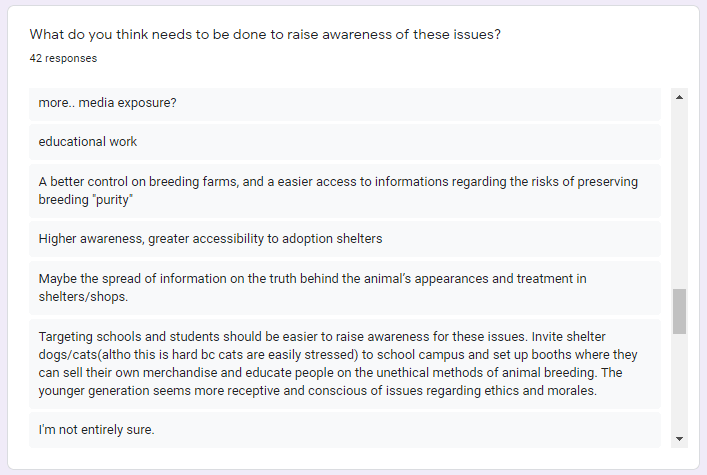 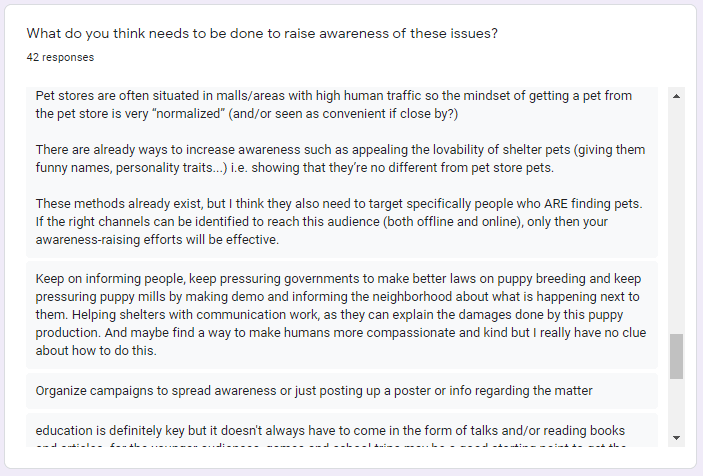 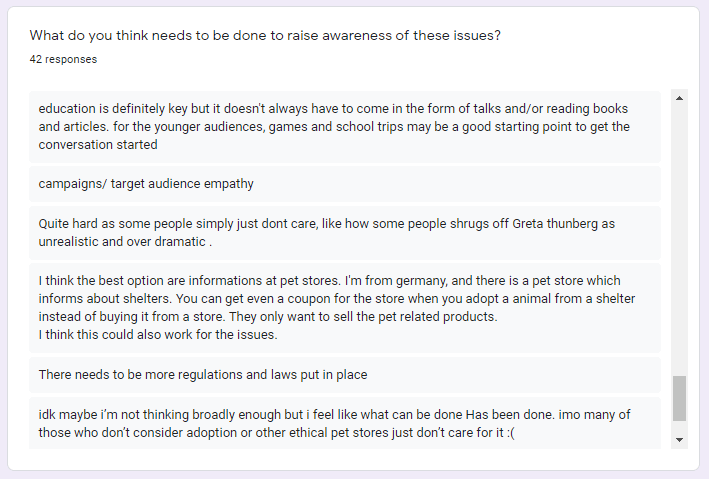 The responses gave me a lot of ideas and understanding on how to go about my infographic and design outputs. Conclusively, there is a lack of education and media coverage on the matter and there needs to be a clear target towards people who are already looking for pets. There also needs to be laws from the government, according to many of the responses. I think shelters give off the impression that their animals are “bad/faulty” can be due to misinformation, and for lack of better word, “marketing” scarcity. There needs to be better access to information on shelter pets and also knowledge on how to care for them, and what to consider before adoption.