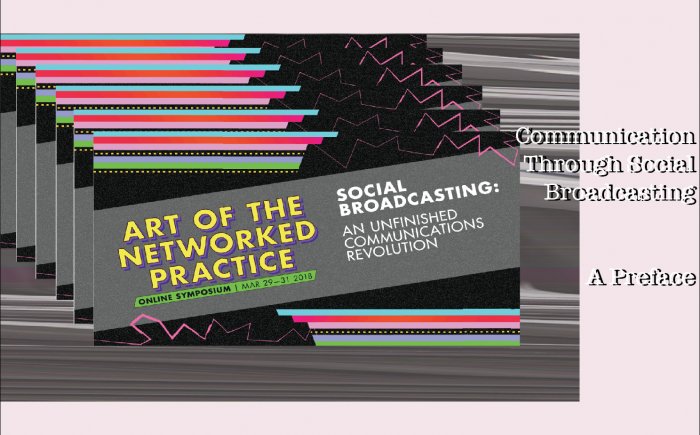 … if the first computer was the abacus, the ultimate computer will be the sublime aesthetic device: a parapsychological instrument for the direct projection of thoughts and emotions. -Gene Youngblood

Yes, it is obvious that in today’s world, technology and the “screens” have taken over the world instead of the evil ones… or is the former the evil ones?

But the chisel, brush, and canvas are passive media whereas the computer is an active participant in the creative process -Gene Youngblood

While the traditional mediums are submissive to the creation of work, the computer remains on par with the creators of art. Though there was a fixed linear way of the interaction of art in the past (and still occurring), whereby the audience only gets to interact with it after it is done up in the studio, this audience interaction with the art piece and the creation of art can now occur concurrently. That being said, the computer remains the one that will perform under instructions and rules, codes and hypertext markup language. Annie Abrahams’ Online En-semble -Entanglement Training shows how a performance can be put up on the Third Space, and how audience interaction and the creation of art can now occur concurrently.

In Annie Abrahams’ Online En-semble – Entanglement Training, entanglement is accepted, embraced and celebrated. A performance that needs the collaboration and the compromise of the collaborators, this performance shows clearly how it cannot be done without DIWO and the Third Space, concepts that are greatly emphasized. As the subject matter of the online performance, latency, something that is hard to take control of, takes over instead of being suppressed. Latency being understood as “the wait time introduced by the signal travelling the geographical distance as well as over the various pieces of communications equipment.” 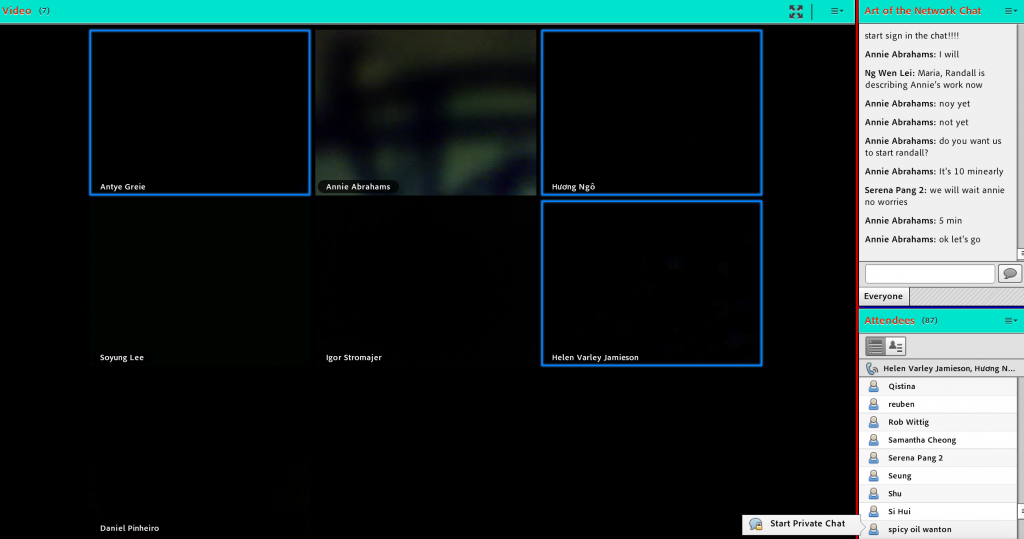 The collaborators took turns to report their latency and saying “excellent”.

Her collaborators come from different countries who possess different cultural backgrounds, where they are connected on the Third Space through Adobe Connect itself on Thursday night, 29 April 2017. In the online performance, latency was observed. The collaborators had to accept the disruption, act upon it and make do with the imperfection. The protocol was to have the collaborators take turns to report their latency in their connection. Also, her protocols were simple for the performance, that allowed for the free-play and the authenticity of her collaborators. 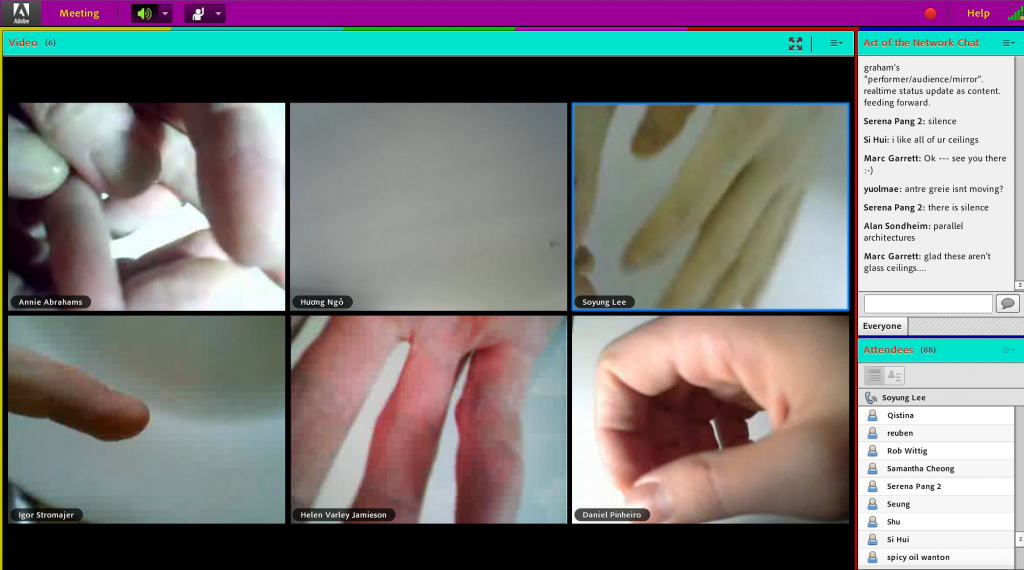 The collaborators were in-sync as they showed their hands on their webcams.

What the mass then realize was that it was tough for them to be in the Third Space all at the same time, despite seemingly being connected to one another through the visuals. They embraced the glitches, the lag-time, creating a new paradigm dismissing the events where disruptions and wait are detested. Just like the Japanese philosophy of Wabi-sabi, Online En-semble: Entanglement Training captured the beauty of disorientations, turn it a hundred and eighty degrees, creating a mesmerizing choreographed internet piece. Although there was a point in the symposium that Annie Abrahams microphone was not working the way she wanted it to, I thought it gave a perfect touch to the piece, aptly applying to the very objective of Online En-semble: Entanglement Training, the ultimate test of the entanglement training itself. Rather than considering it as a katakana, it was taken in as part of the piece. Annie Abrahams successfully took the minor keys of the internet and composed an internet piece with a perfect harmony, a harmony of disorientations.

It is internet performers like Annie Abrahams who revolutionize the way art is – how art is portrayed across to its audiences and how art is perceived by its audience. Moving drastically from brick and mortar museums and art studios, art can also be observed just at the comfort of our homes, performed on the Third Space for its netizens.

Jon Cates’ IGAIES – How the Boundaries of Communication is Pushed

Jon Cates’ IGAIES (intimate glitches among internet errors) then further touches on how Internet Art can communicate through a performance our very society that touches our senses that challenges, pushes the boundaries of a performance art.

It first started out with a few performers showed on screen with filters over their faces, with their faces still visible to the online audiences. 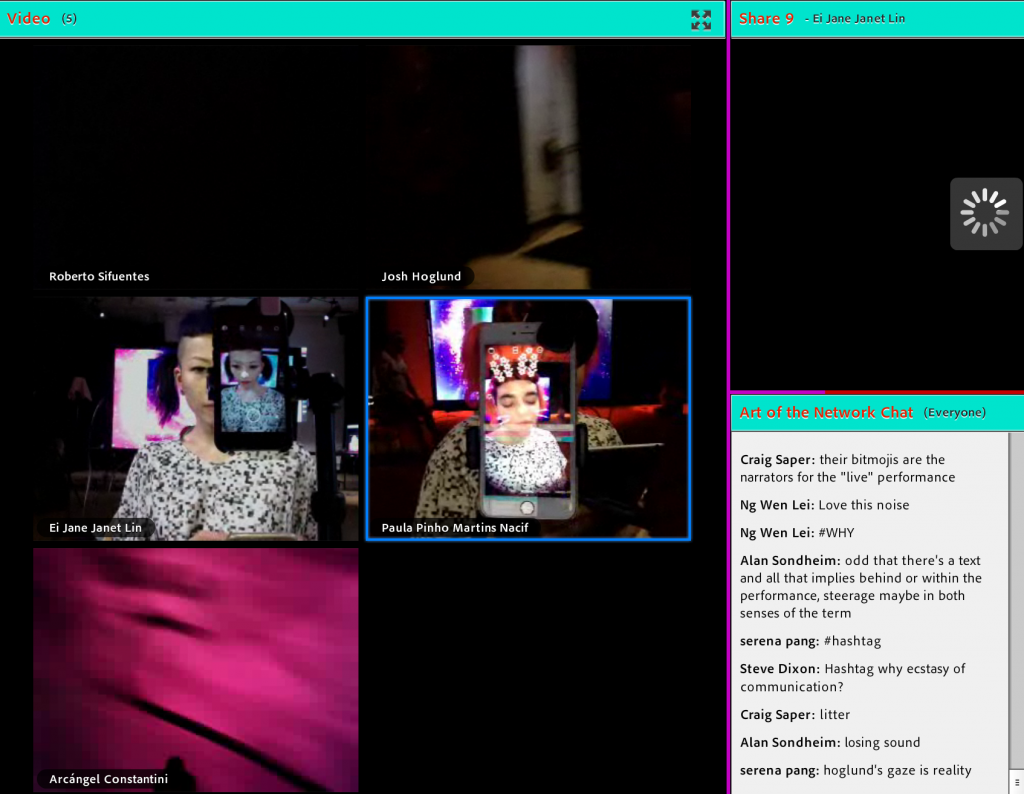 XXXtraPrincess with filters on their faces.

I thought this has very successfully bring across the notion of our digital identities, our online personas, illustrated with the different filters. We can be who we want to be online. At the beginning of the performance, classical music was played at the background, as if signalling the very start of the performance and how we used the internet when it first start to bloom, creating the global village, a notion brought forth by McLuhan. Leeches seen on the table

This is an example of a part where the online audiences are left more unsure than the physical audiences at Chicago itself. 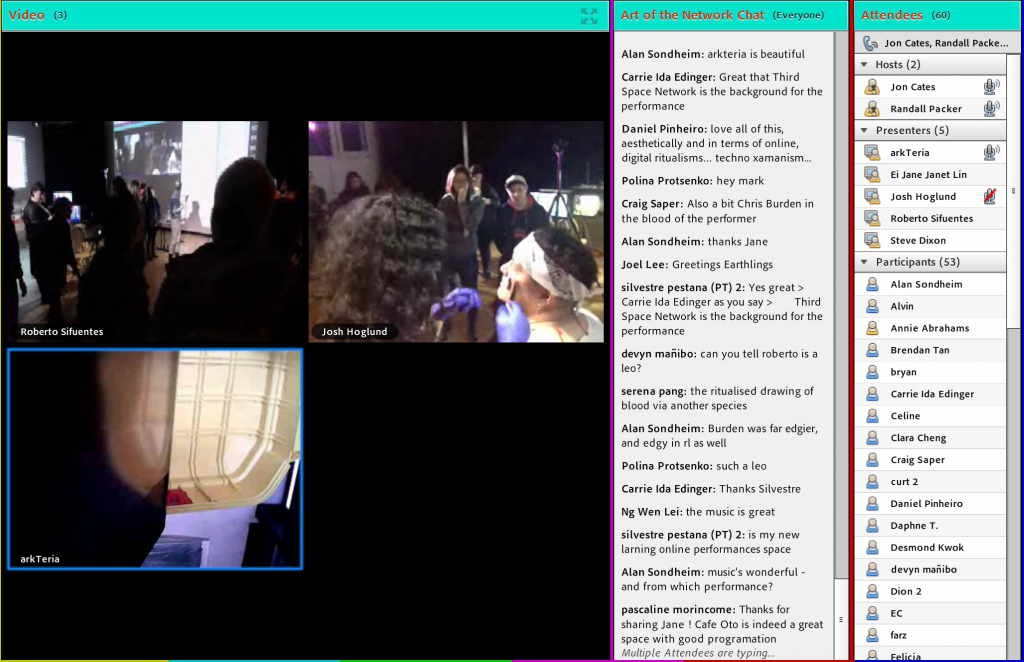 What really shocked us was when the leeches are placed on Roberto Sifuentes, a near-death experience.

Leeches can be seen as good and bad. Good in the way that it can cleanse the body by sucking out the toxic in the blood and bad in the way that it gains out of the the body it hangs onto. Perhaps, it is both. The same way how the internet has impacted the world. How it sucks the living out of us, that we live for the “gram”, or “do it for the gram” which shows how netizens are living for the things they put on their social media. And on the other hand, the saving grace, or the realization of our overdosage of it. “Everyone dies cause of technology”, perhaps its a question of when.

It is fascinating how IGAIES brought to light the dark side of media. Of which, the venue of the performance, Chicago, had a huge role to play, “the birthplace of dirty dark media”. Dark Media, a term coined by Eugene Thacker describes a side of media that “have, as their aim, the mediation of that which is unavailable or inaccessible to the senses, and thus that which we are normally “in the dark” about”. Breaking its boundaries of what is deemed as acceptable and what is not, triggering the human sensory, our sight and hearing. It is of no doubt how art has continued to bring to light the situation of the society.

Another remarkable way that communication has moved away from its conventional method is a piece called Me and My Shadow highlighted by MariaX. Me and My Shadow

The idea of shadow communication stood out to me. Instead of merely using words and/or the webcam to speak as a form of communication, body language is in the limelight for this installation by Joseph Hyde.

The life-size projection used the shadows of the participants to communicate and bring people together namely in London, Paris, Istanbul and Brussels. People were able to communicate in real time by their shadows. These people although located in different geographical locations, they are brought together in a virtual space, the Third Space.

Immersive and shows how technology can push the boundaries of communication is indeed the highlight of this piece. And how the other parties view you on the other hand voice down to how do you perceive yourself and how do you plan to portray yourself through the shadows. An interesting approach in communicating, letting go of the words and languages, but solely by our bodies.

Moving away from traditional media, new media has changed interaction from a main source to its audiences to a peer-to-peer interaction system where audiences gets a say in affecting the transmission of information rather than a more top-down approach. The chat system throughout the symposium itself is an apt example of how the audiences get to interact with one another without directly interfering with the Internet performance itself. This further proves McLuhan’s idea where “the medium is the message”. The way the performance impacts its audiences is dependent on the medium in which it is used to convey the performance to its audiences. Take day 3 Jon Cates’ IGAIES for example. There were two types of audiences. One the physical audiences who got to view the the performance in real life and the online audiences who viewed IGAIES through Adobe Connect. 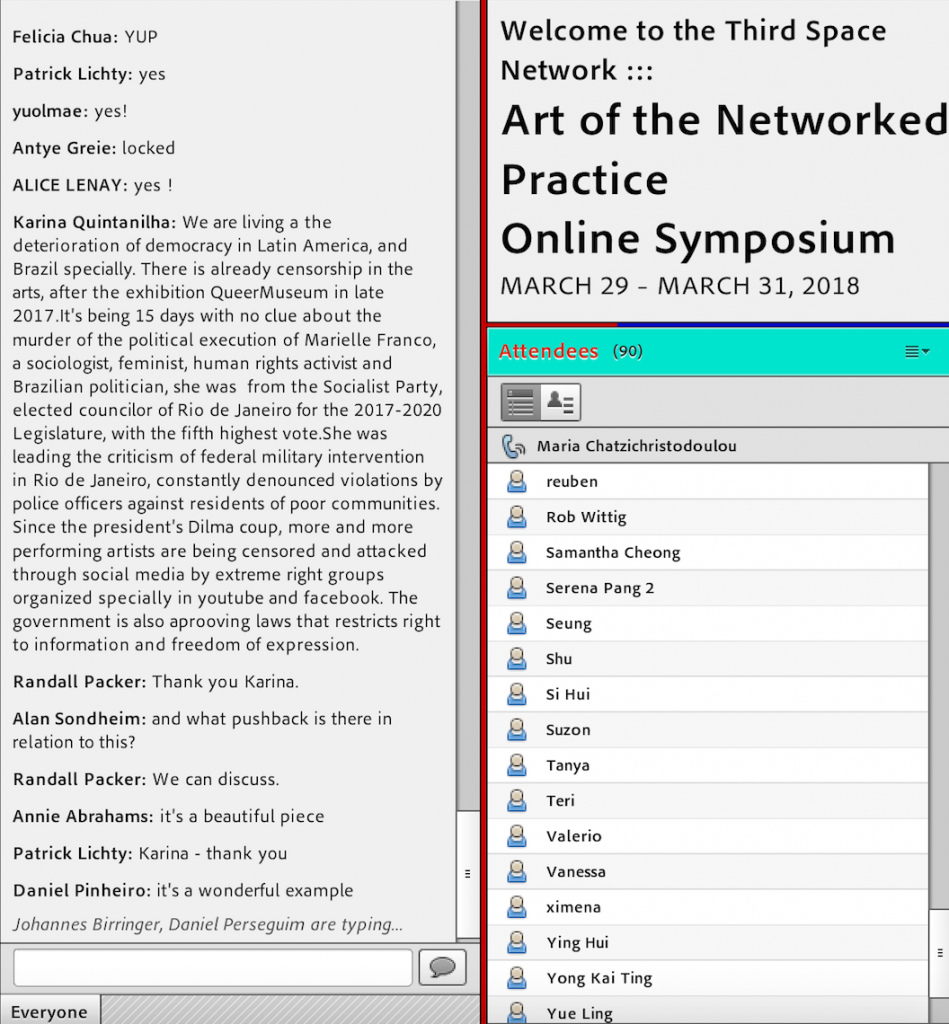 The chat box where online audiences get to interact with one another, discussing about the symposium without interrupting the speaker.

“When wireless is perfectly applied the whole earth will be converted into a huge brain, which in fact it is, all things being particles of a real and rhythmic whole. We shall be able to communicate with one another instantly, irrespective of distance. Not only this, but through television and telephony we shall see and hear one another as perfectly as though we were face to face, despite intervening distances of thousands of miles; and the instruments through which we shall be able to do his will be amazingly simple compared with our present telephone. A man will be able to carry one in his vest pocket.” – Nicolas Tesla

Migrating as a village from physical to the virtual world, this village has accepted more people, more diversity than the old one – the global village. As we advance as a community, I wonder how Internet Art will continue to evolve in the future. This is merely a preface, my fellow netizens.

The Third Space Network: Art of the Networked Practice – Program

Urban Dictionary – Do it For the Gram

Me and My Shadow – Joseph Hyde

The Language of New Media