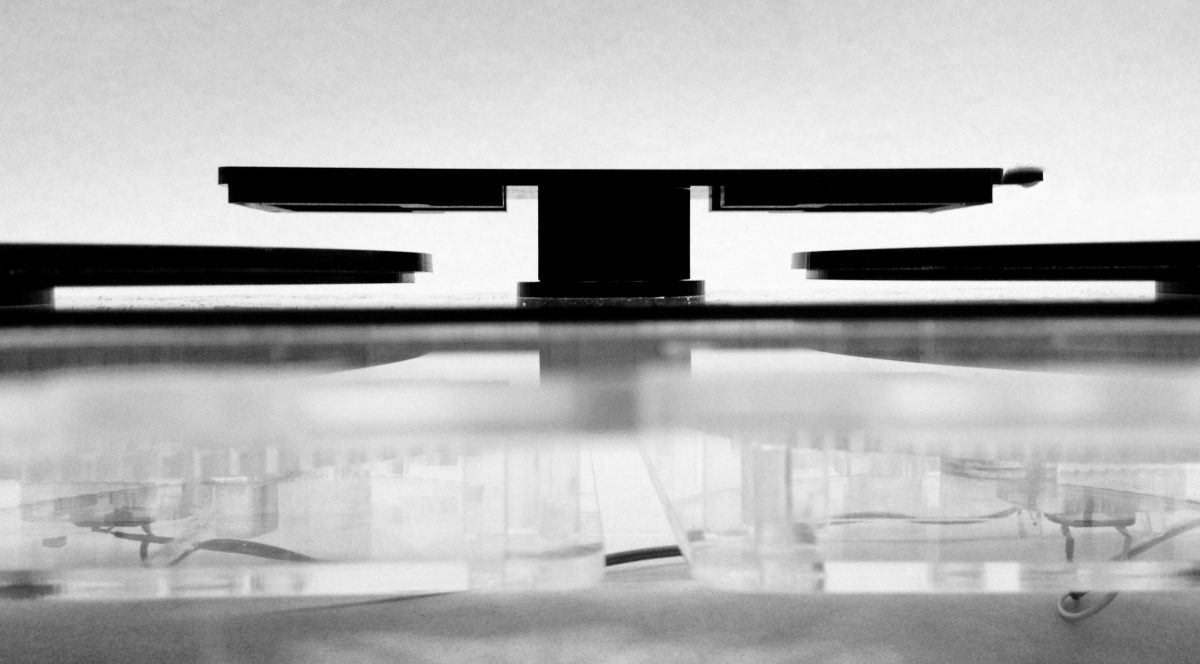 I knew from the beginning that I wanted to do something with sound. But I didn’t have the idea of what I wanted to do straight away so I began brainstorming about what I could do that was interesting and maybe fun for a potential user or observer. I thought of a instrument that would visualize the spectrum of a sound physically that the user would create on a potential machine.

I began to think about how this could be achieved, all the solutions I came up with was either quite clumsy, bulky or un-precise. So I dropped the idea with visualizing the spectra and moved on for a week of thinking about doing a box where you could interact with another human through a similar box in another place in the world. After a week, I dropped that idea and went back to music with a mix of colors. I started thinking about what I could do, looking for inspiration and so on. I stumbled upon the Adafruit’s RGB-sensors and I thought why not combine colors, shapes and sounds, certain colors could trigger certain sounds. How is this going to work then? Will the user just put colors under the sensors to play the song. I thought of relating the shape of the thing to old styled tape recorders to give a hint of what it could do and relate it to music.

I sketched some simple drawings and made a cad model of how I wanted it to look like, this was a bit overkill. But the look and the style could some way be derived from it: 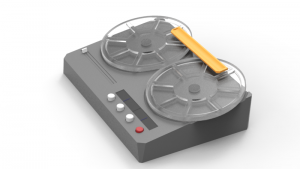 I started to work with the most important part, that was to get a disc to spin. First I had to deal with the speed of the engine that I was using, it was way too fast to be used to spin the disc, assumably to weak as well. So I had to create a gearbox that made the disc slower and at the same time stronger so it could manage to rotate. I made a quick test and found some scrap pieces of acrylic and cut five gears and made a disc from some cardboard. This was the first test with the gearbox, it was successful it worked and the engine managed to keep the wheels rotating. 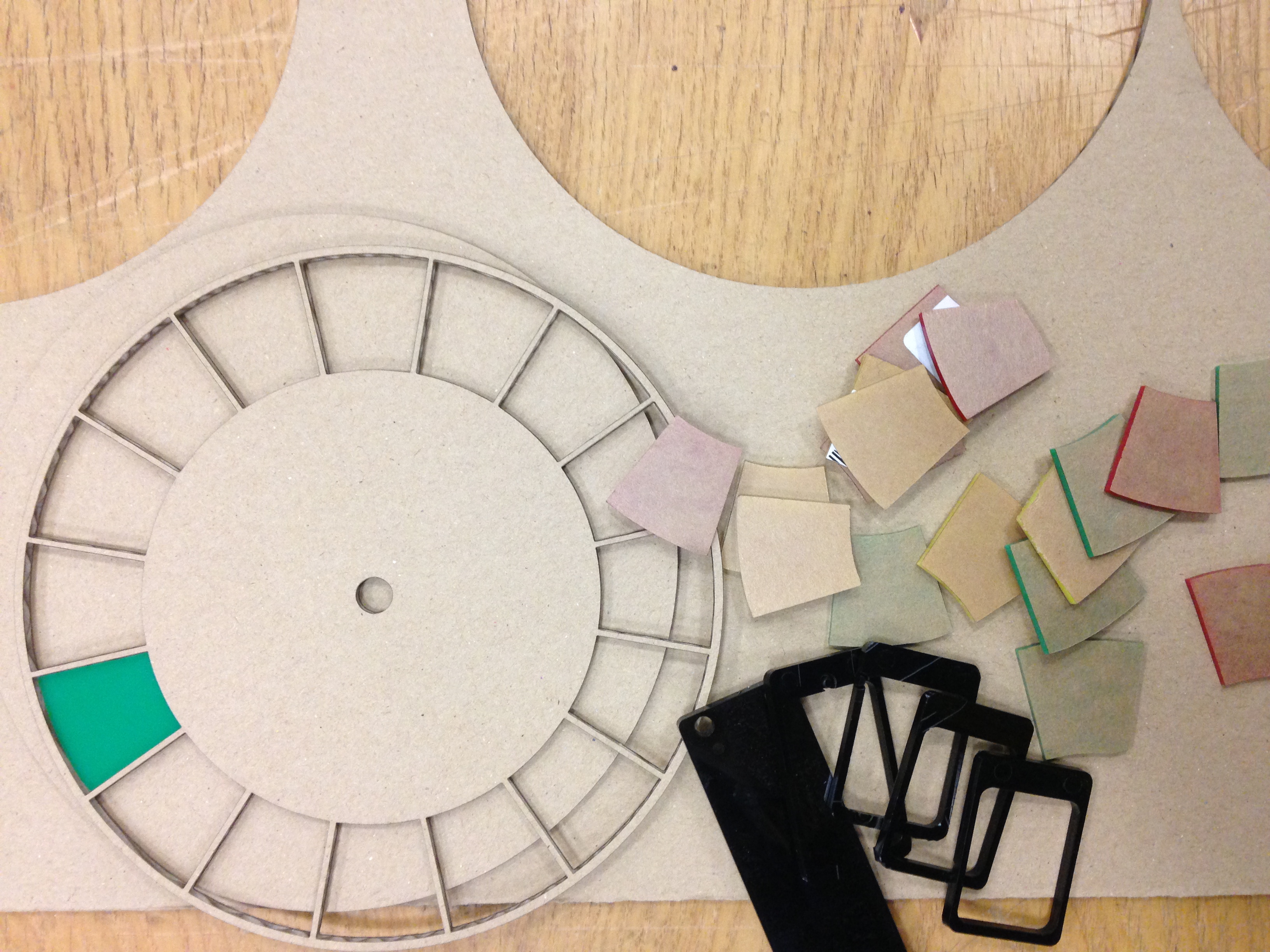 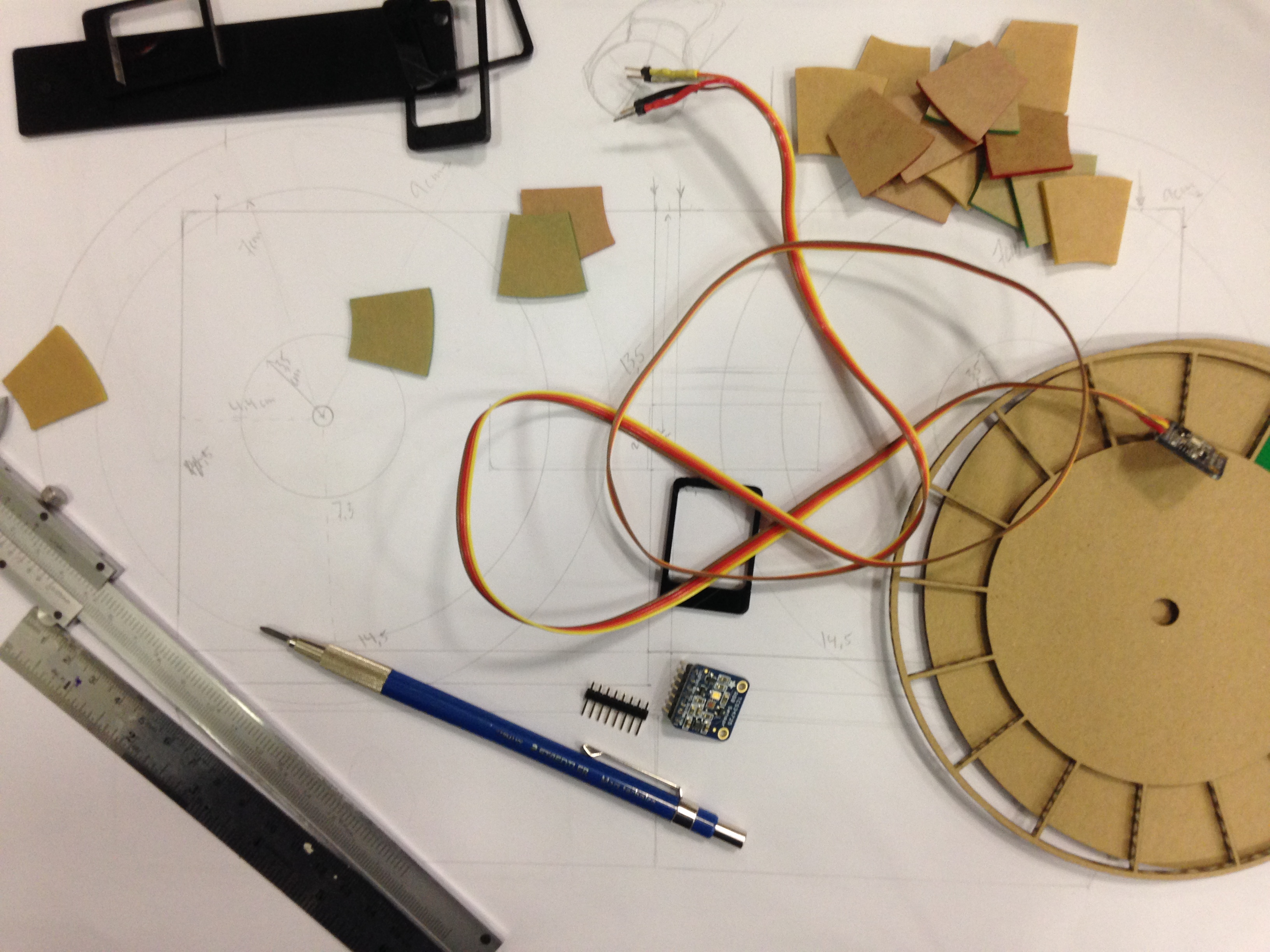 As I got the ugly mockup to work I decided go further with my idea and by material to make the housing box, the discs, two gearboxes and the sensor holder that would hold the sensors on a fixed distance over the rotating colors on the discs. 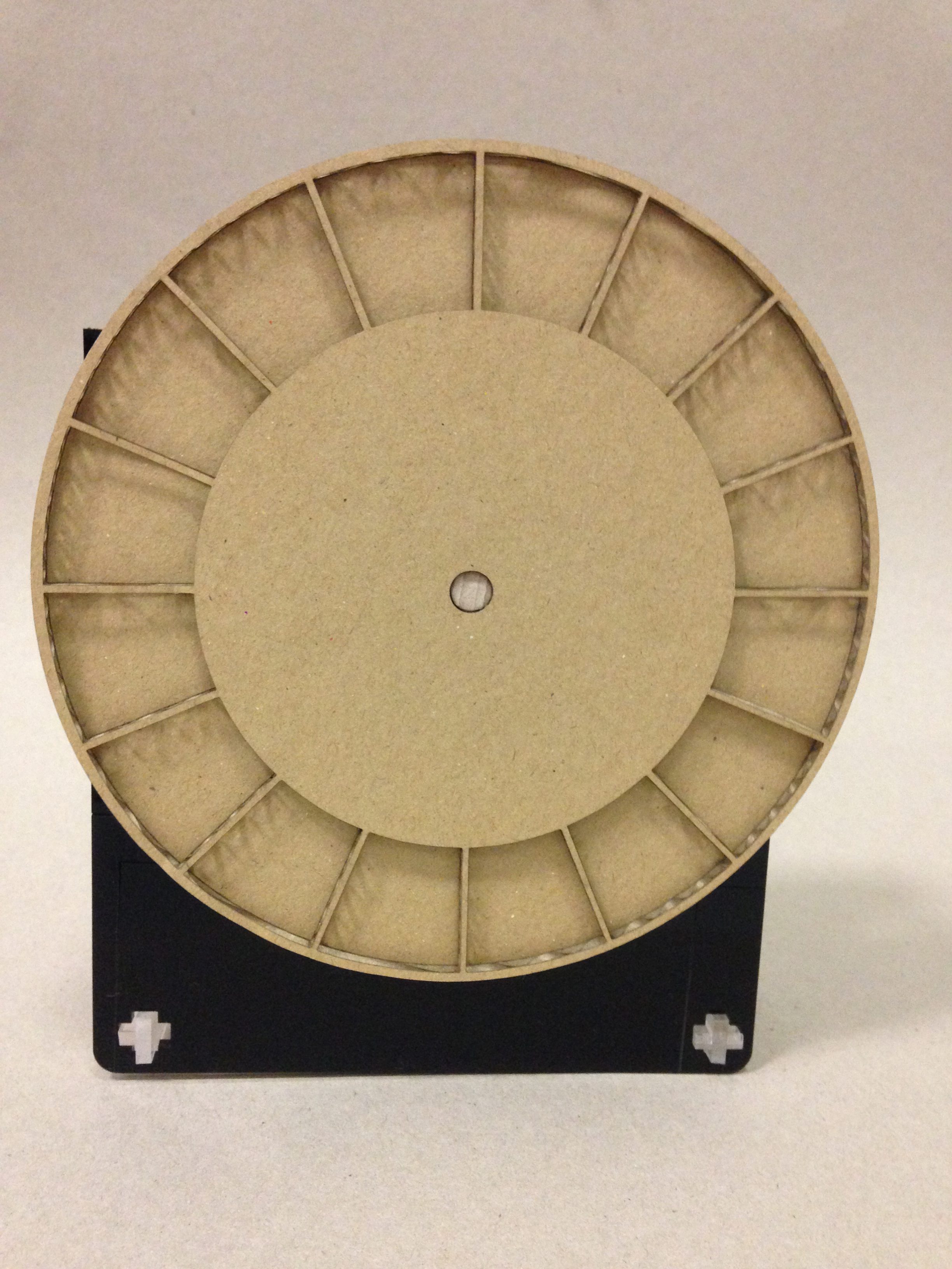 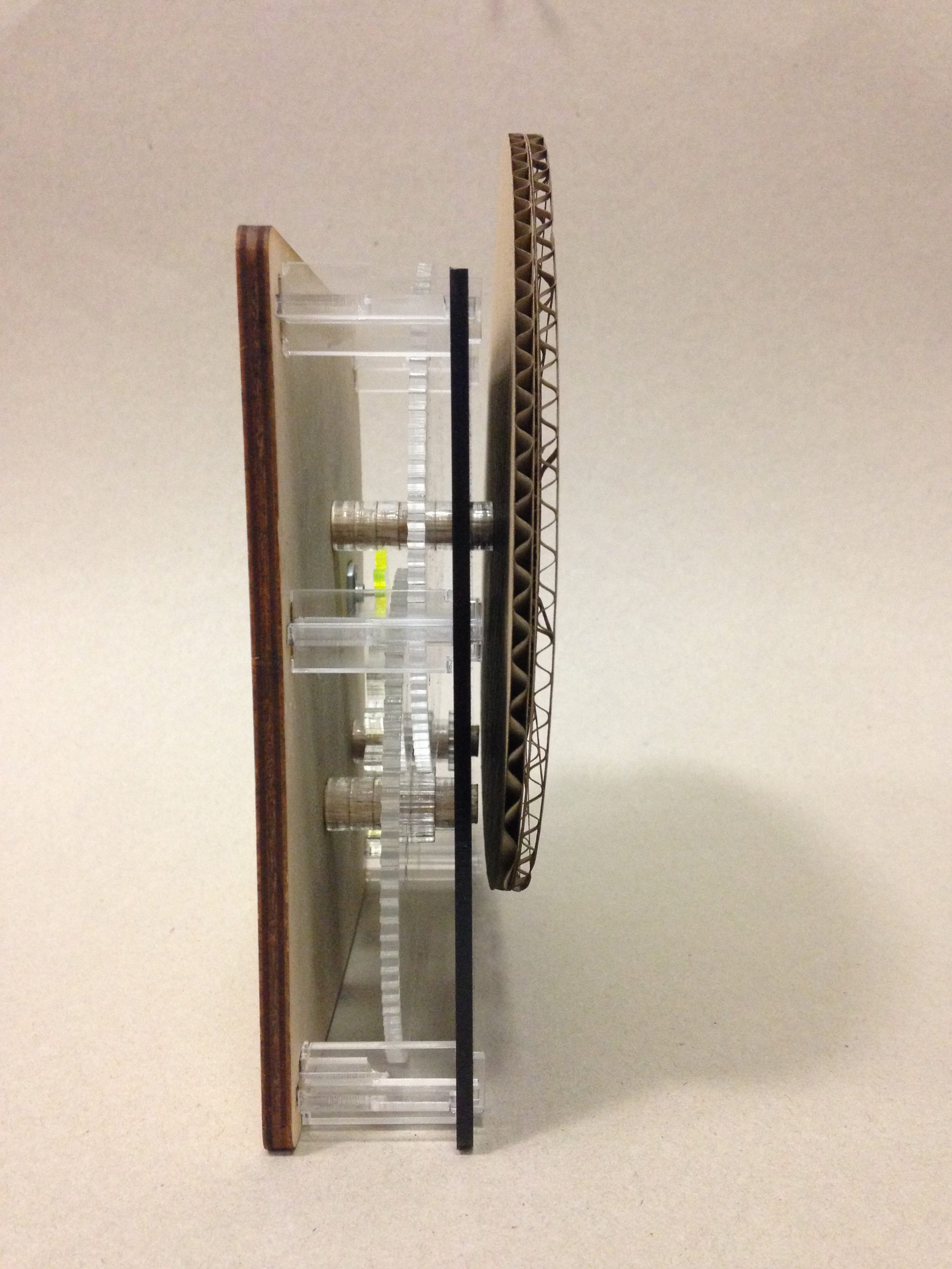 When I started to tests with having two rgb sensors reading values at the same time I ran in to problems with the way they sent their data to the arduino. The data was not split up, so instead all data came as a merged stream of numbers. There were no solution in sight for a while and I thought of having two separate arduinos doing the reading, until I again stumbled upon a library that someone with the same problem had made where this problem was solved. This was alright when it comes to the complexity to implement it, pretty straight forward and the coding for the knobs where you change the sounds of the colors were less problematic. 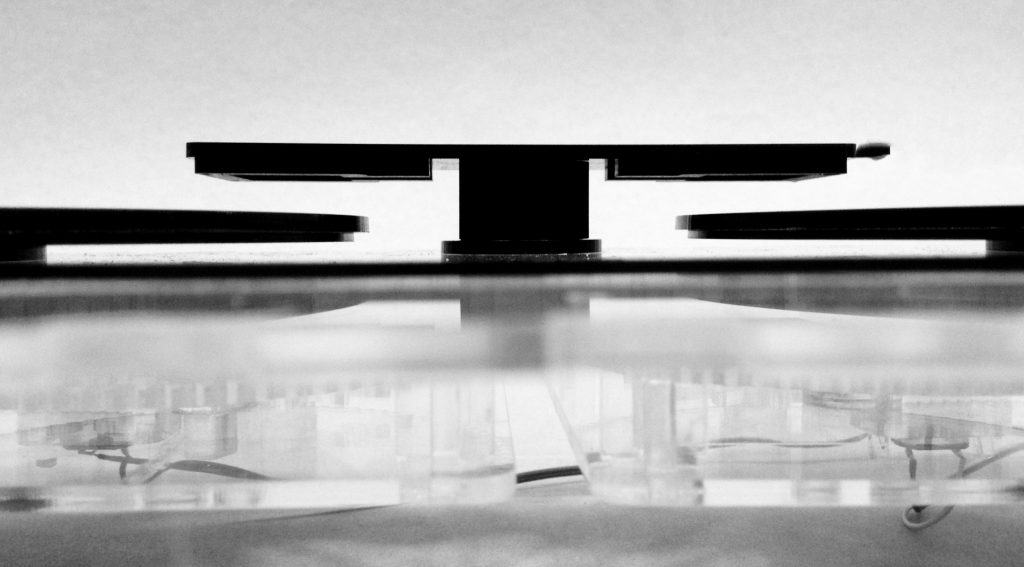 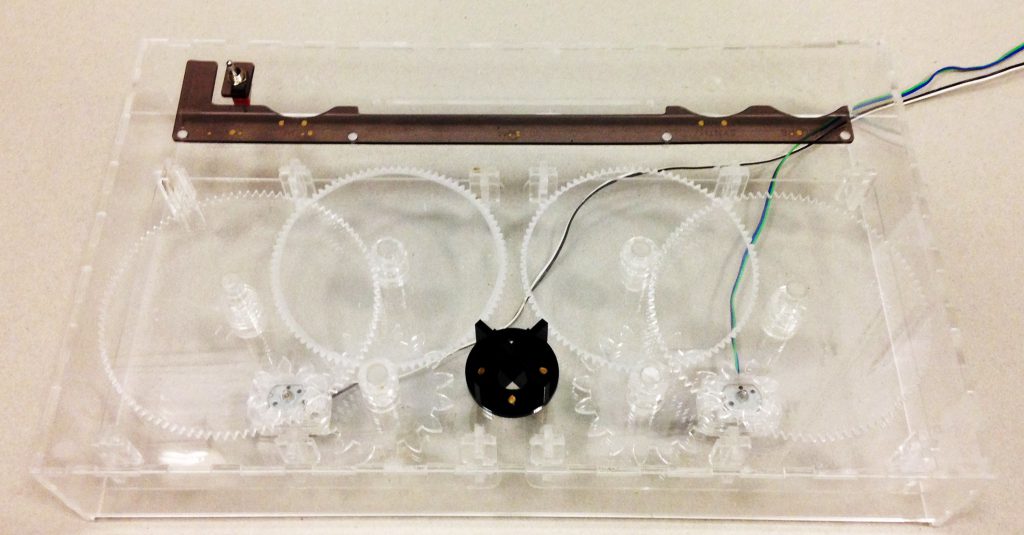 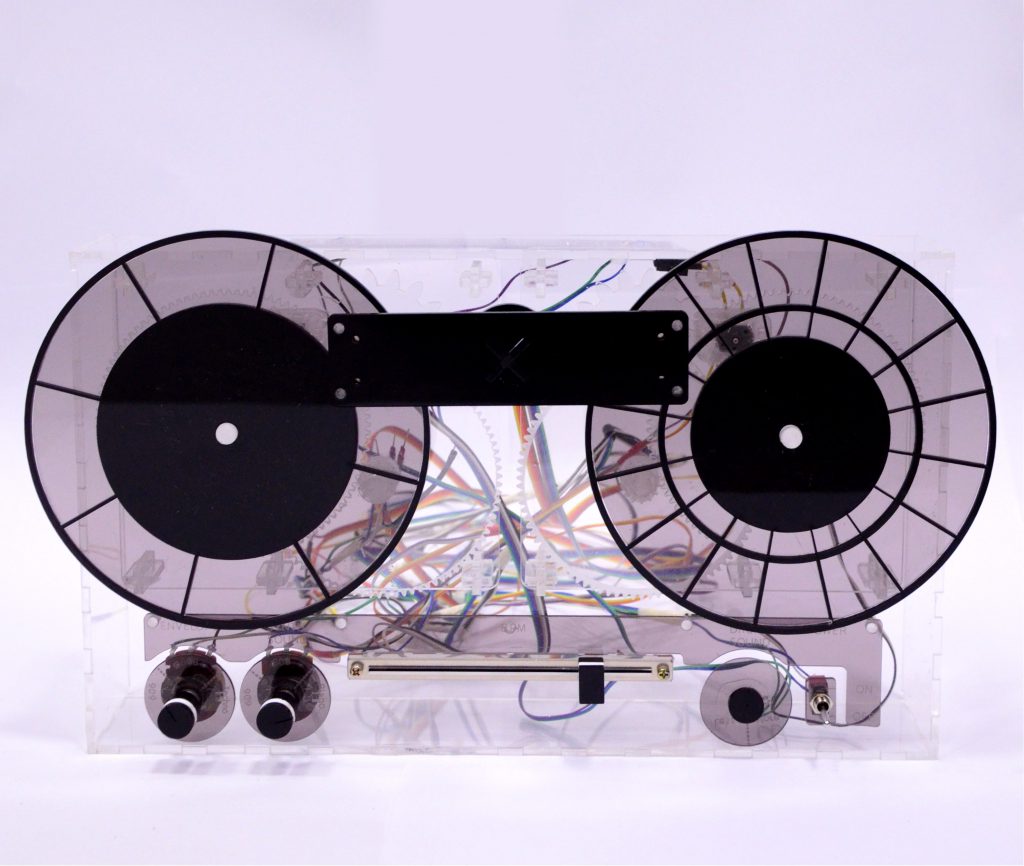 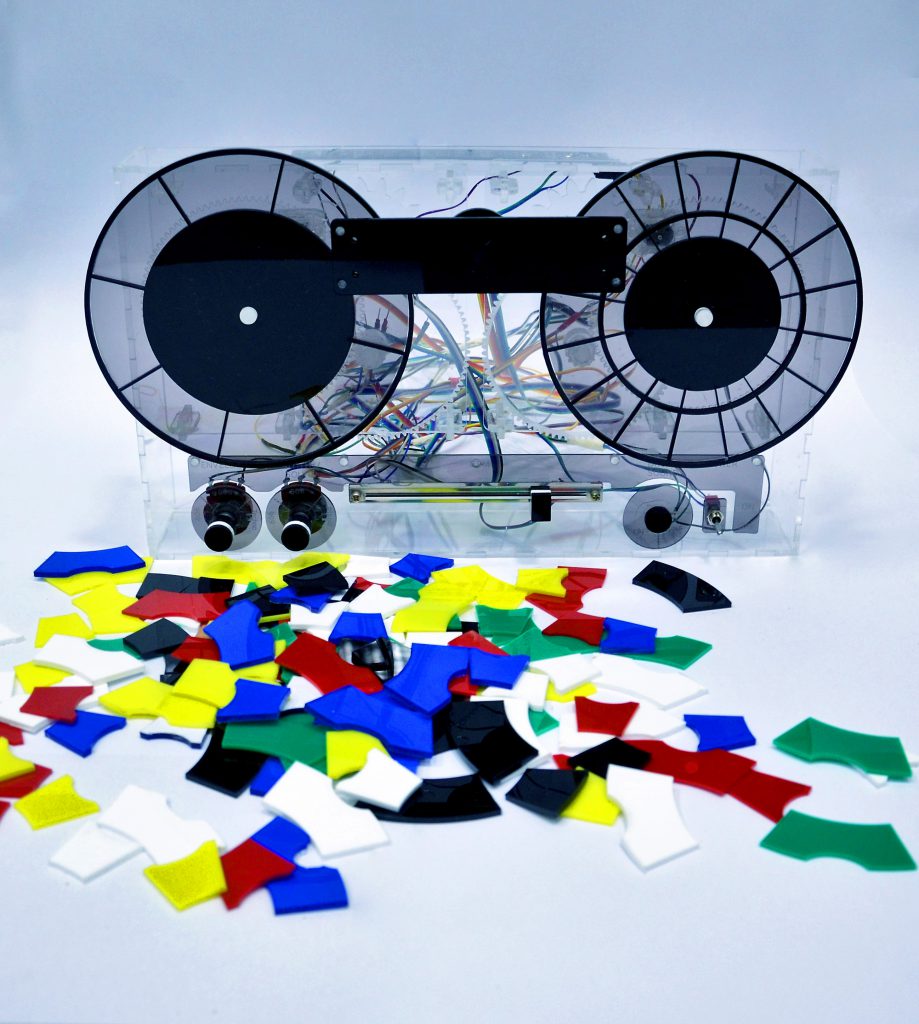 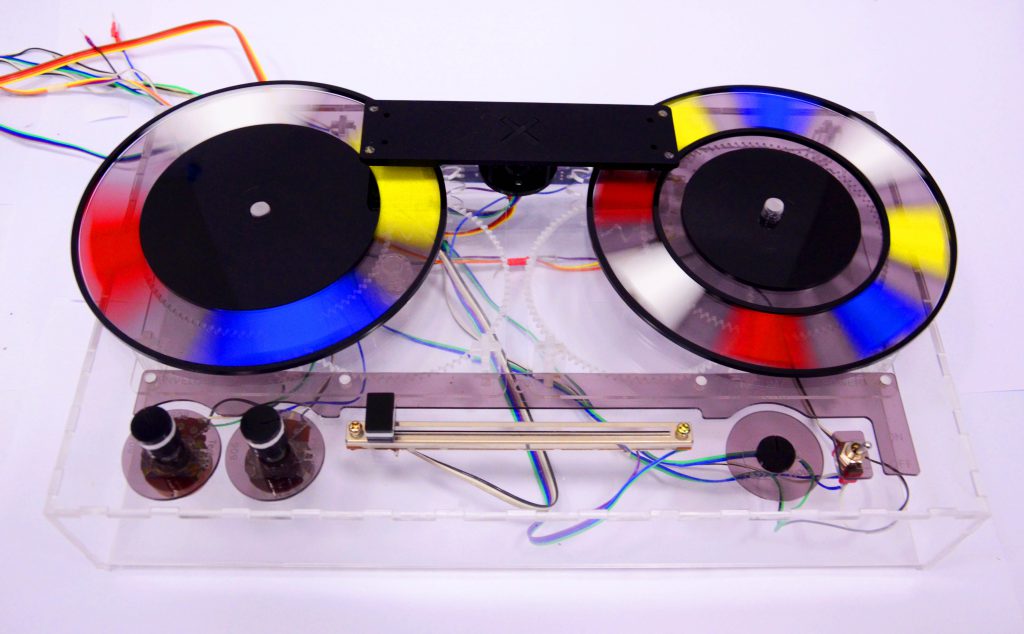 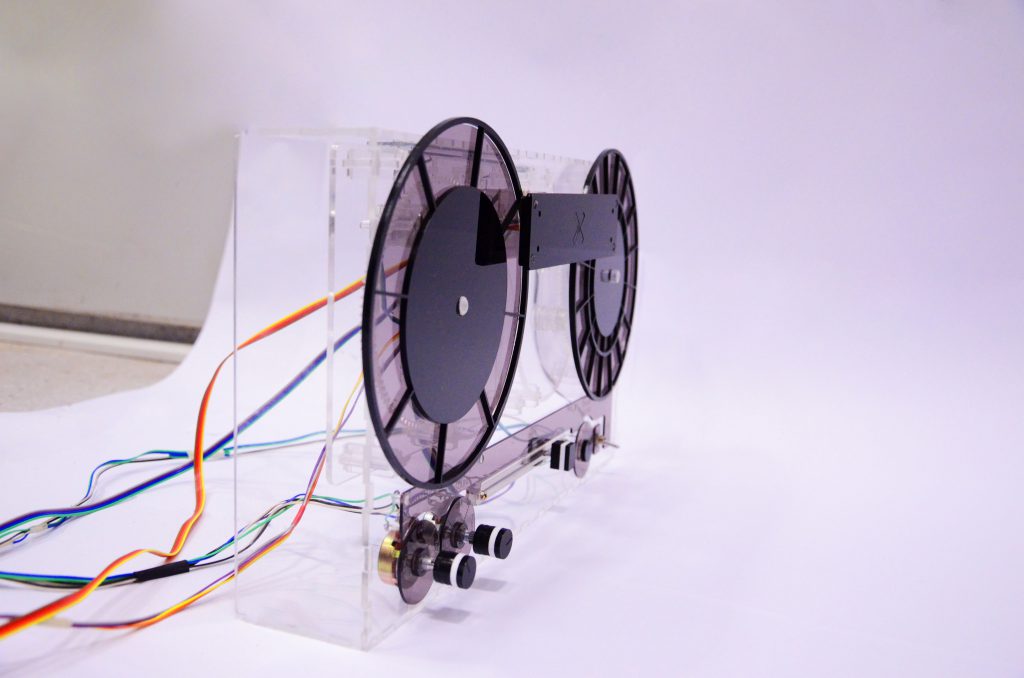 Enough with the technical details.

I wanted to play with the synesthesia of sound, color and the sentimental part of old music machines. I wanted the user to really see the colors and connect a certain color to a sound or other way around and through this make the feeling of control of what’s coming out as a sound bigger. I wanted to convey this in a nice packaging which invited the user to play around and experiment with the colors, the sounds and the whole machine. Both colors and sound effects us all in various ways, even if you are blind or deaf sounds can make you feel the vibrations and color can be imagined. With this in mind I wanted to make something that can be appreciated by many and played with by whom who want to.

It can be as simple as a musical instrument as well, where the button or strings has been replaced with colored pieces for the user to place where they want to.

Feedback from the show

A lot of the users didn’t realise that all the functions really was working and that the different pieces of colors could be placed as they wanted. So I had to show for some people that they could experiment to a quite big extent with the machine. From time to time it was quite a lot of people playing with it, which I found really fun. First I didn’t attach the discs to the motors which meant that the users could choose how fast or slow and what direction it would spin, this was actually much appreciated. Something to keep in mind if I’m doing a second version. 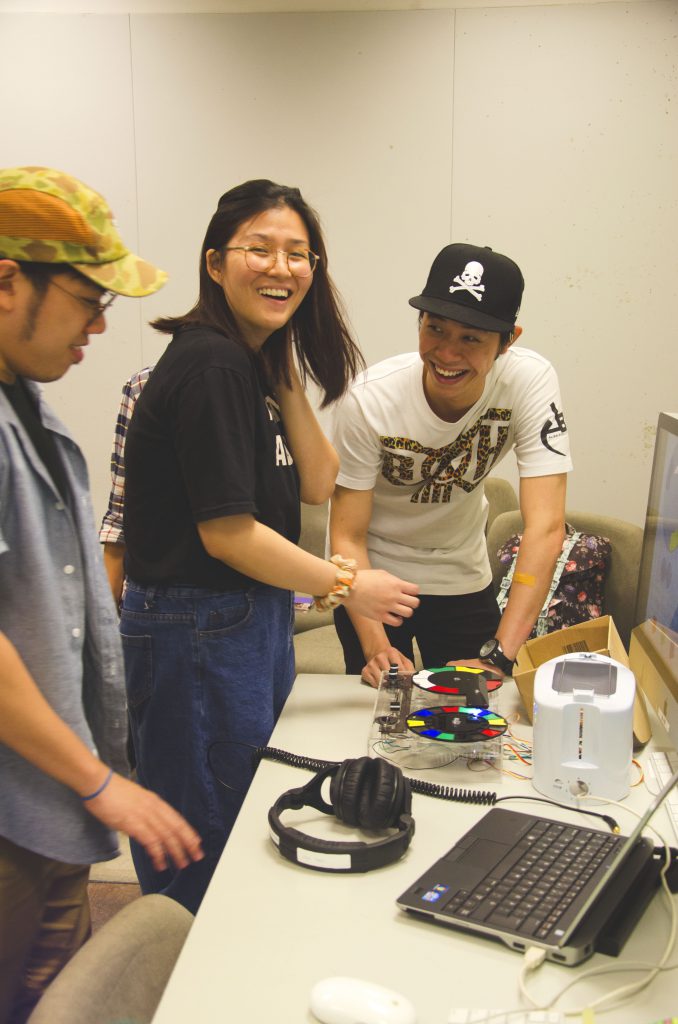 Pieces in the thing: