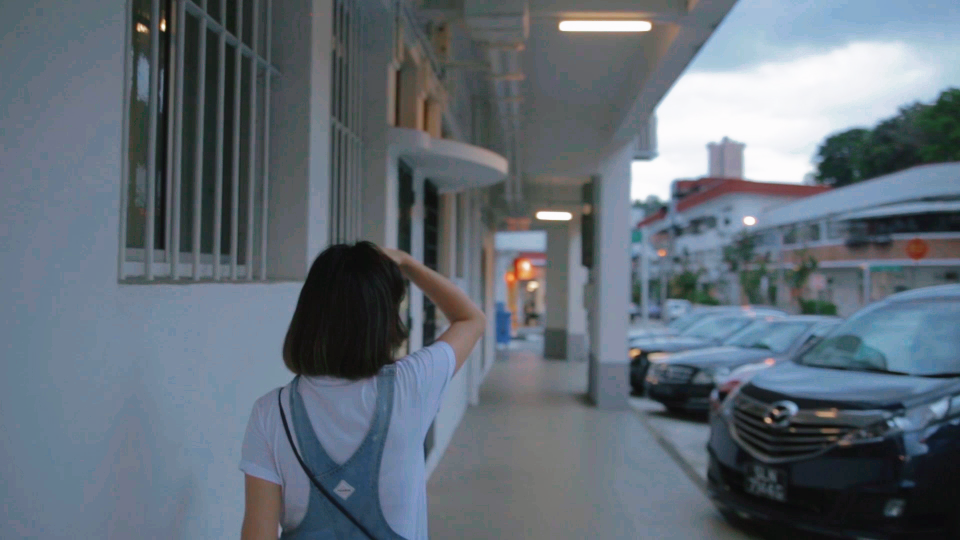 I decided to present my research in Tiong Bahru Art Deco Conservation Estate through a website and a short interview video.

Some visuals I created off the site – 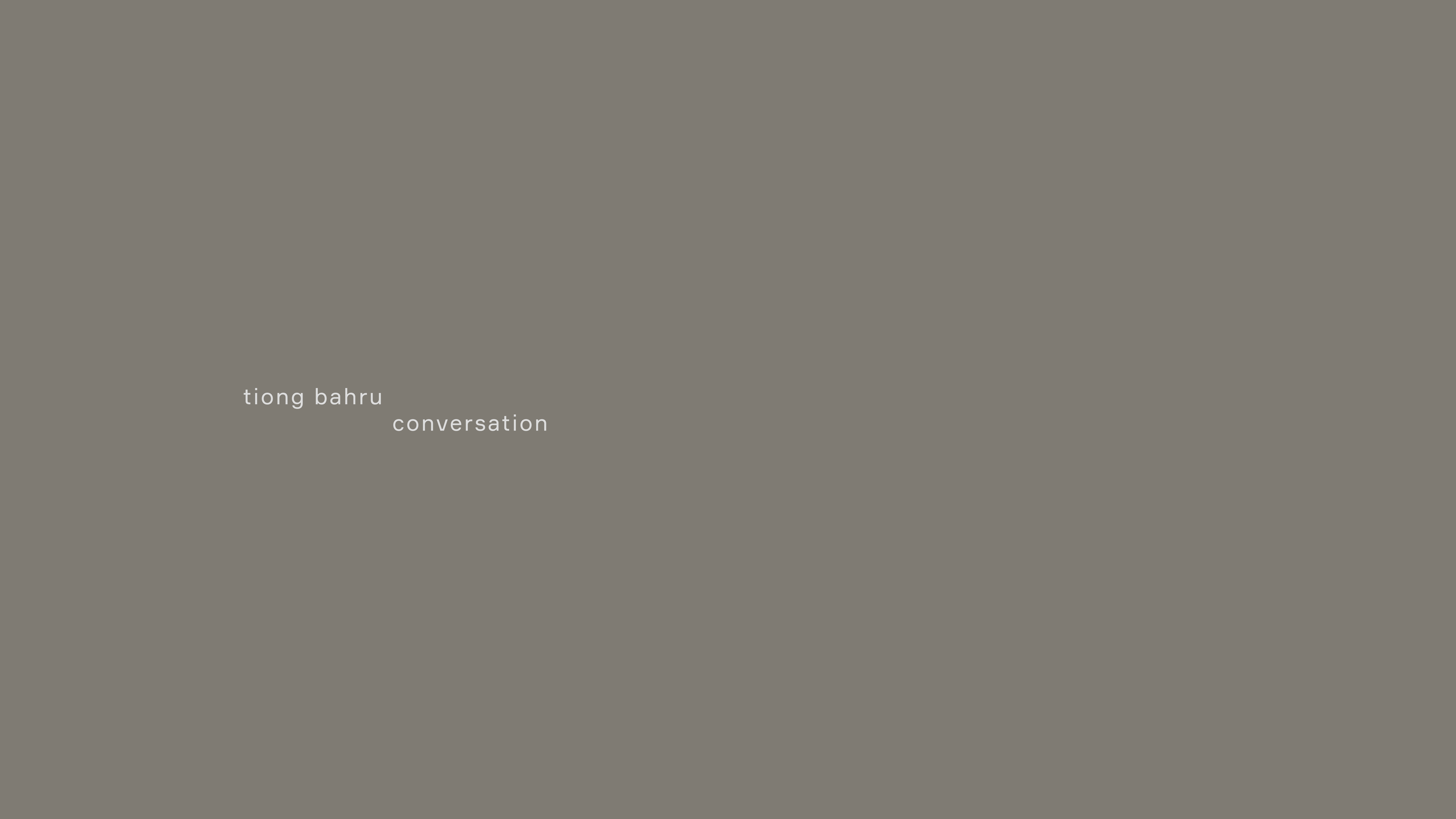 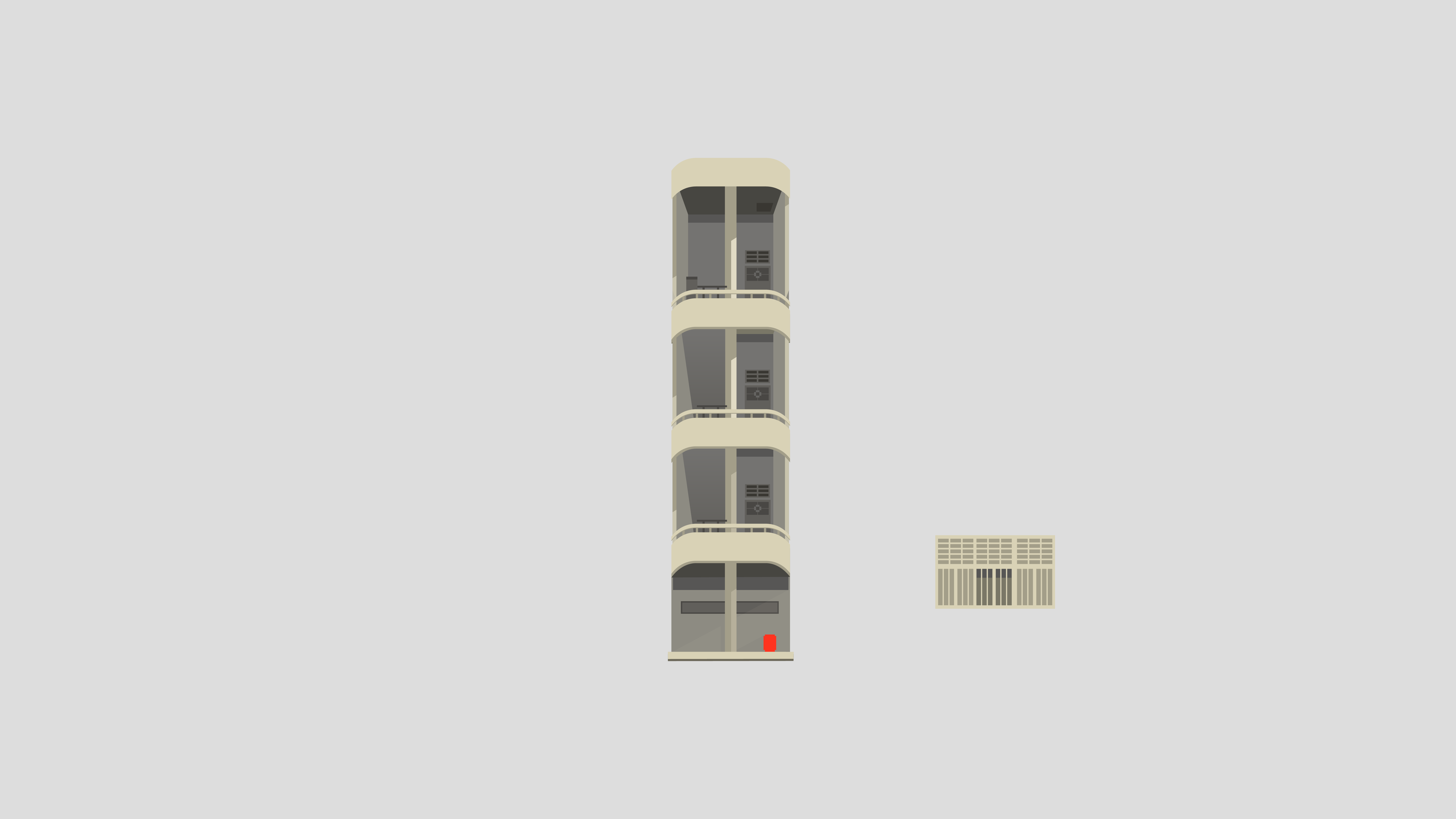 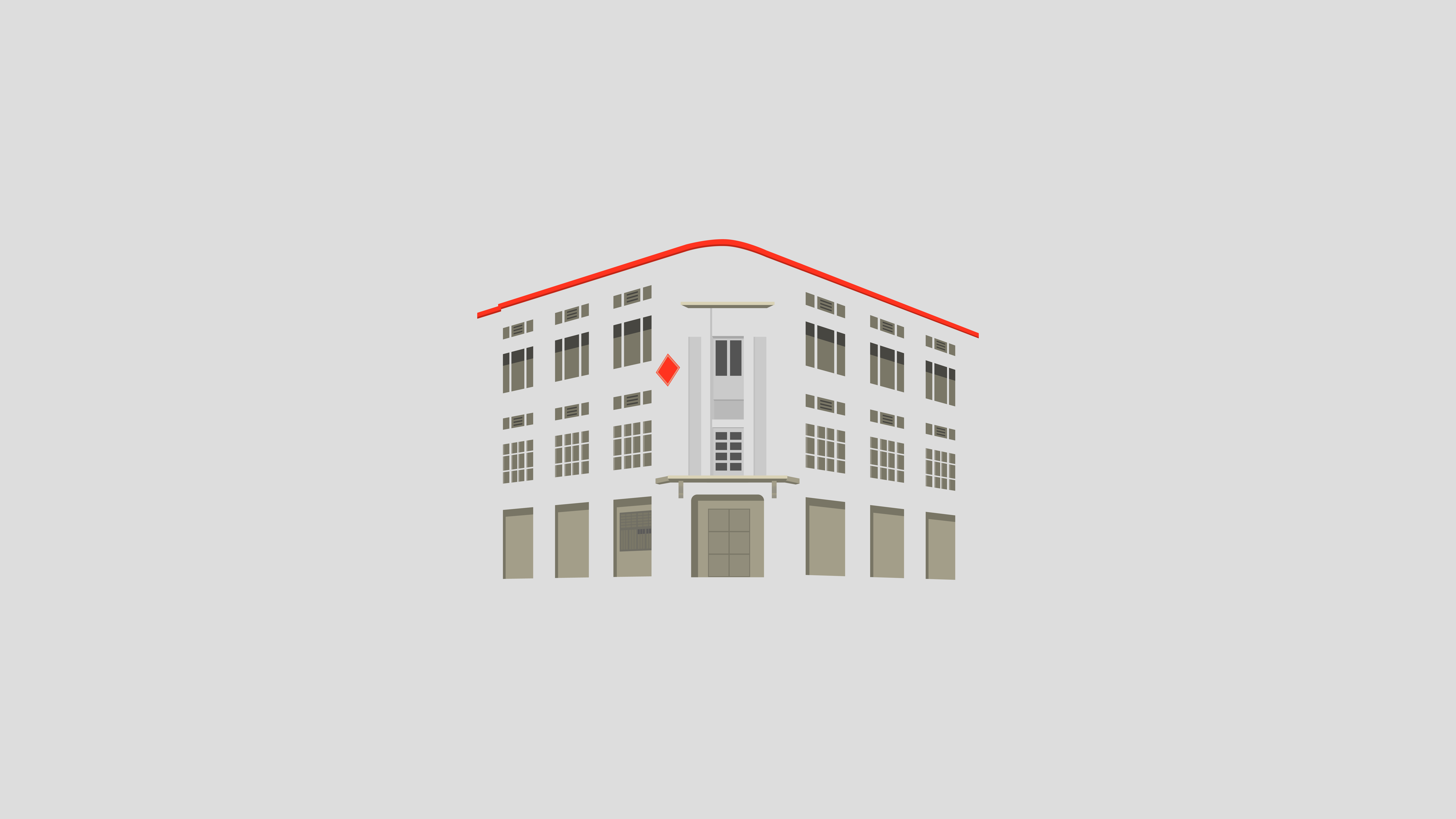 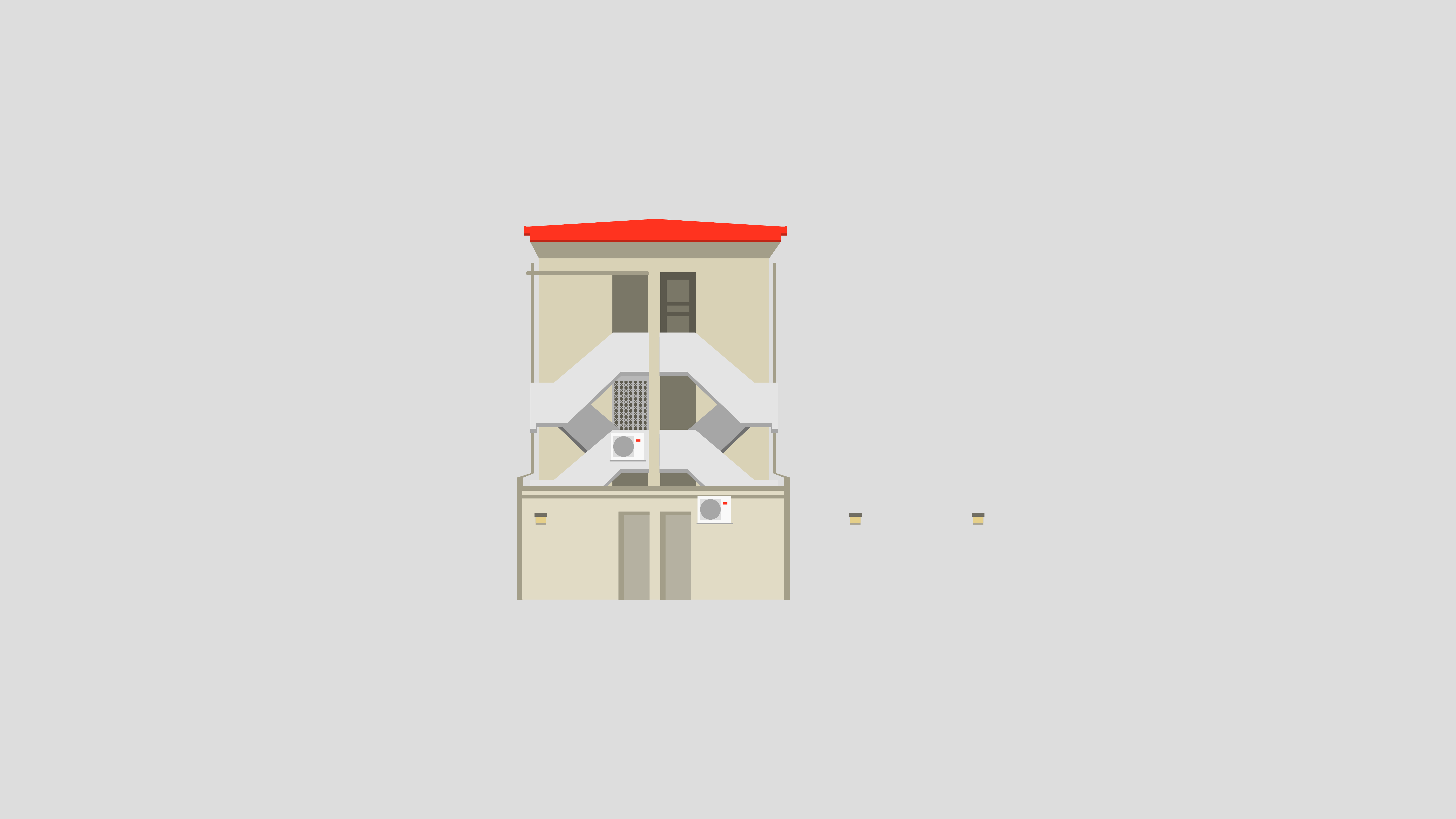 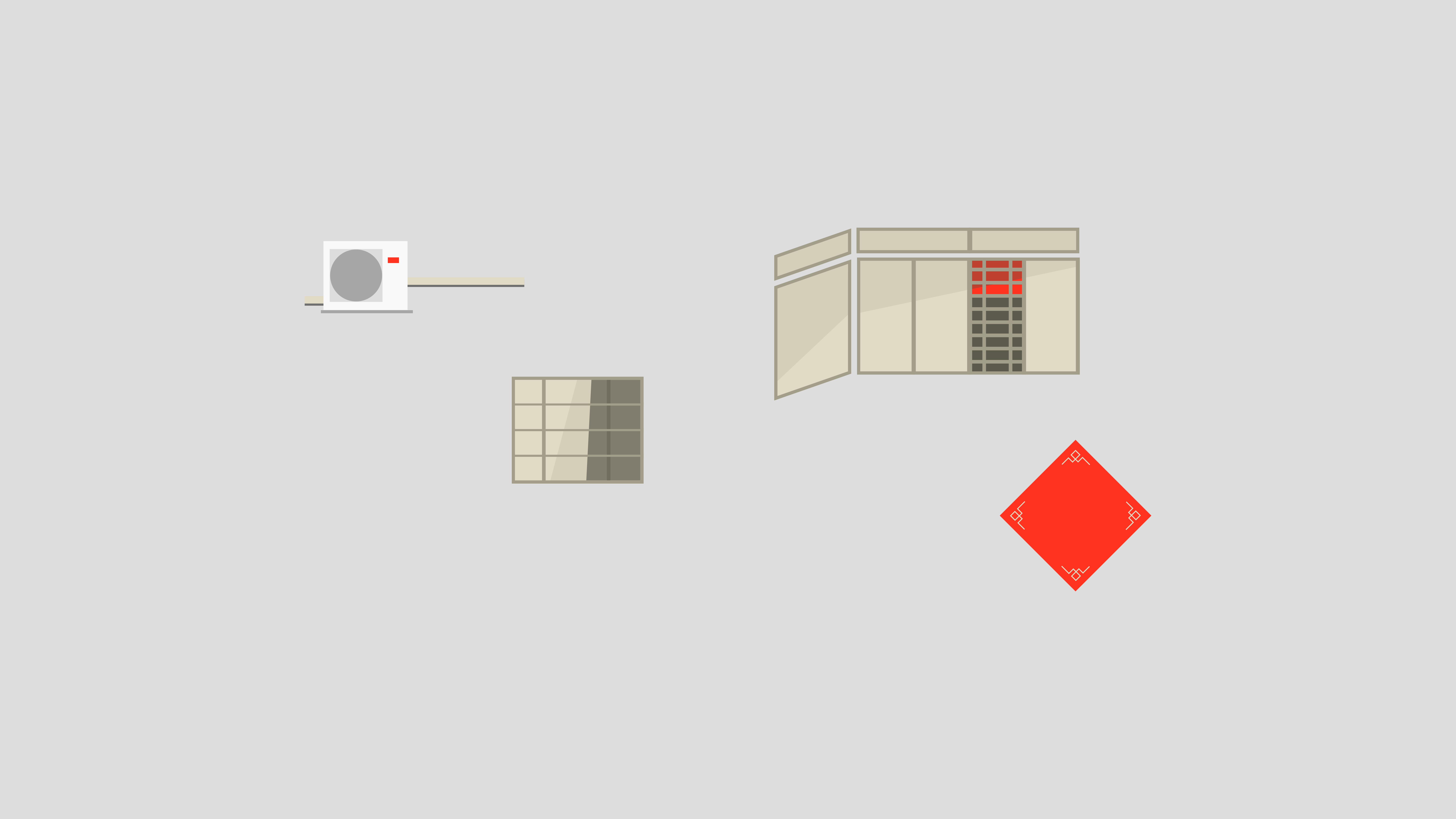 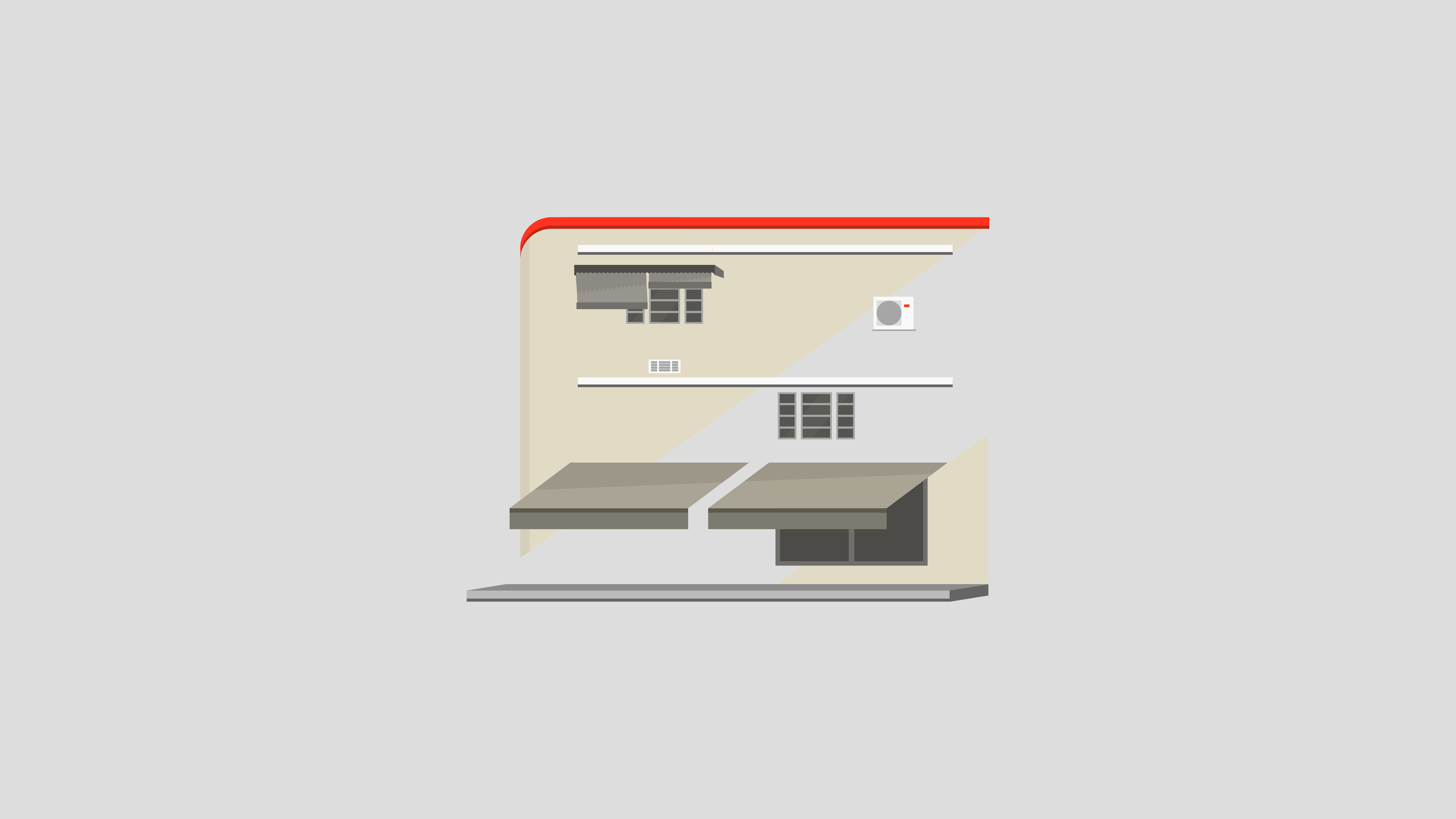 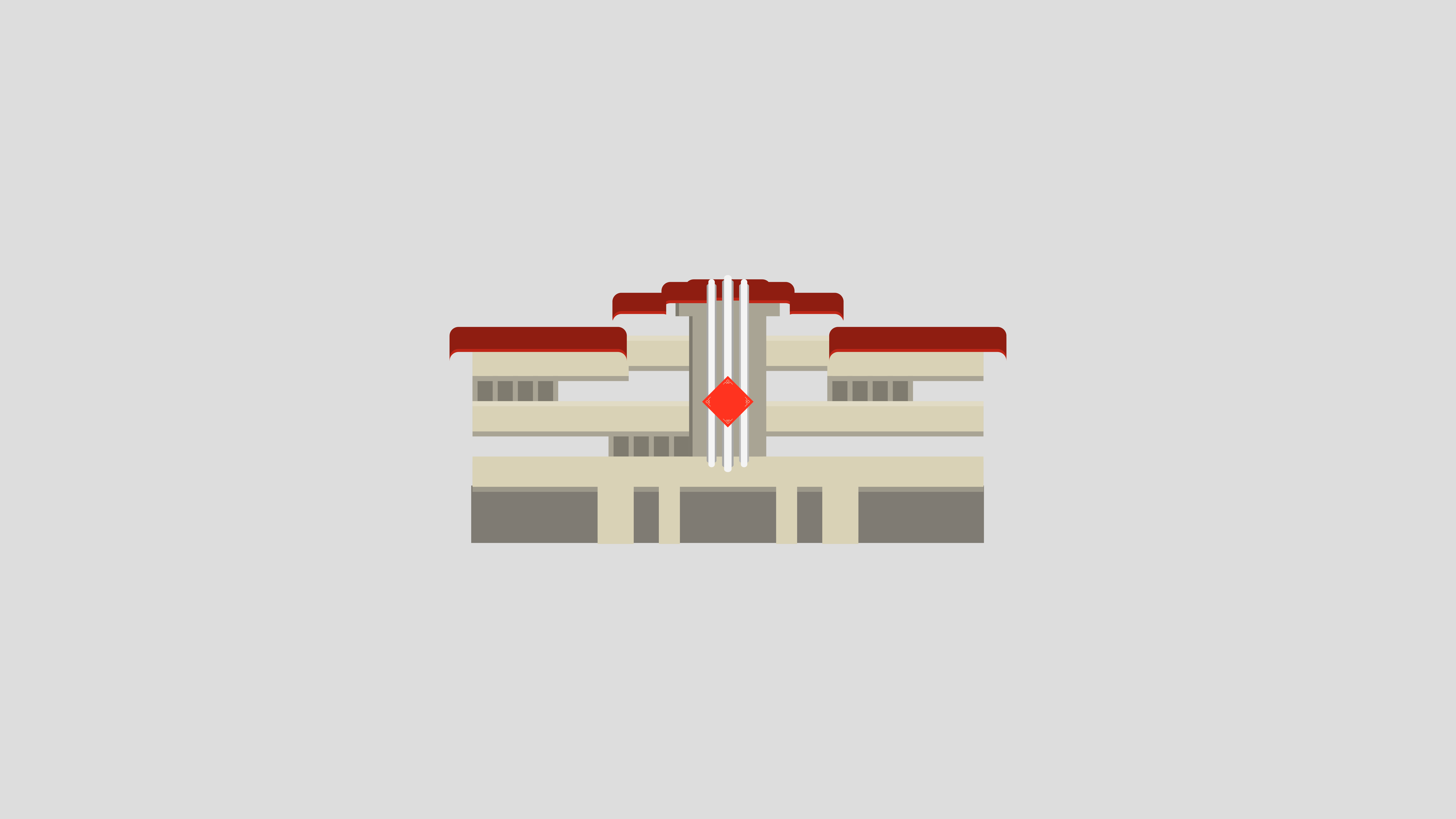 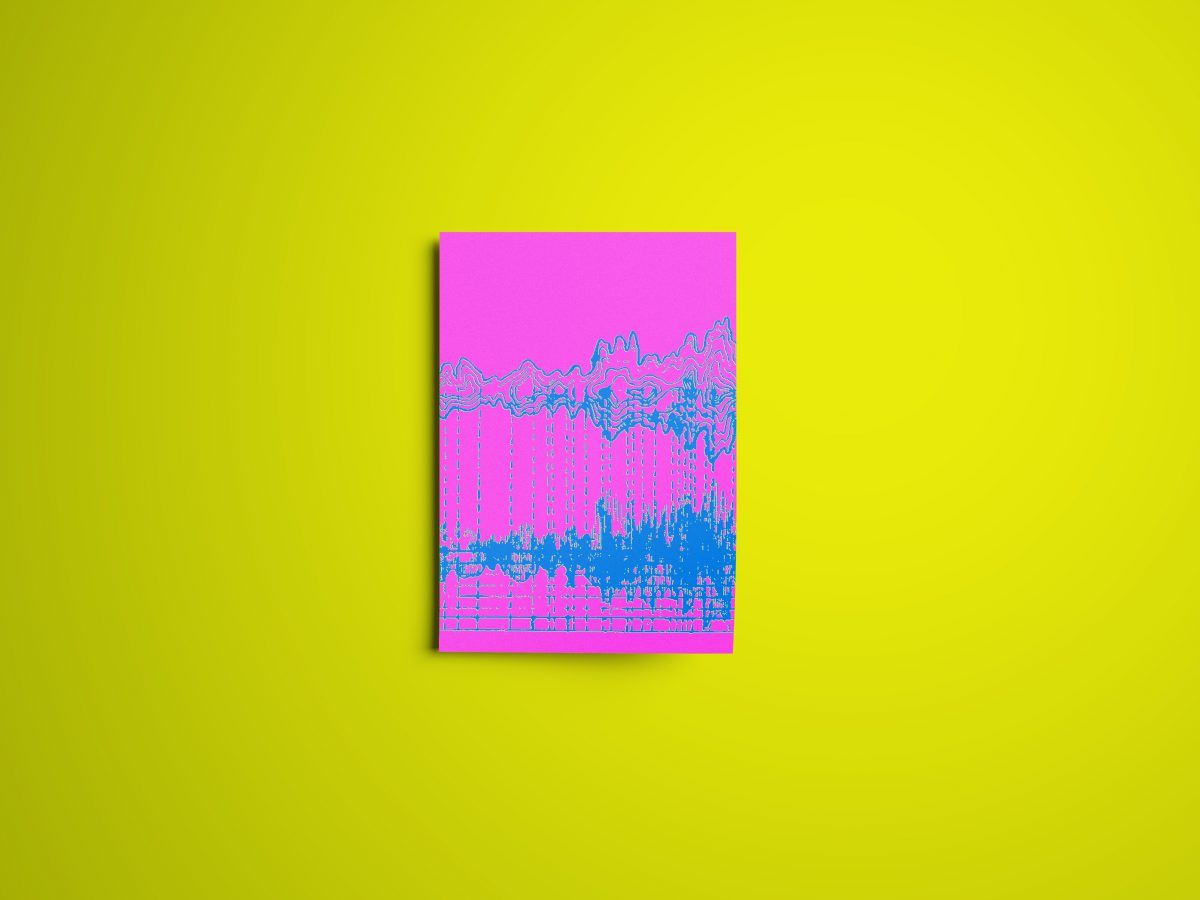 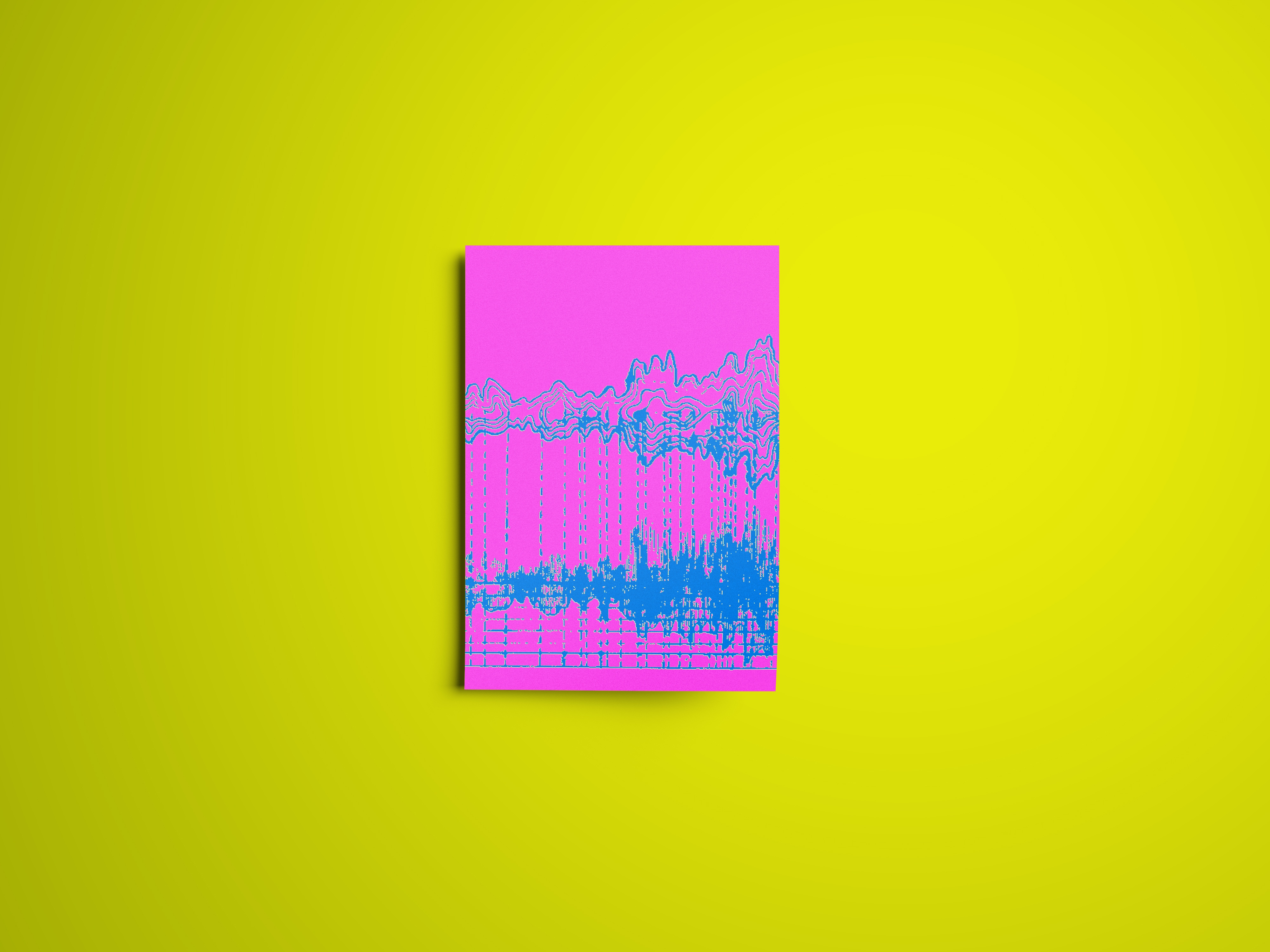 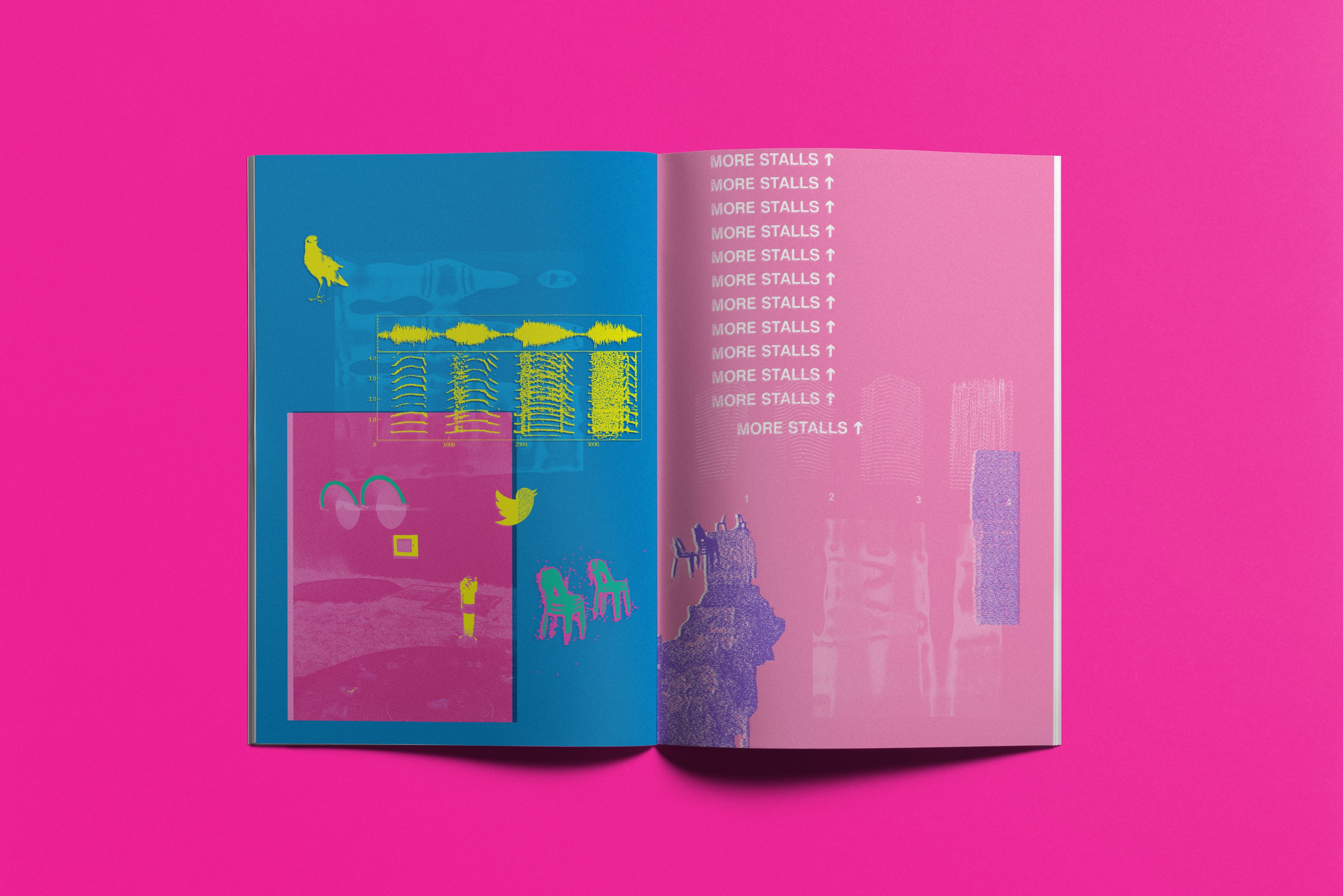 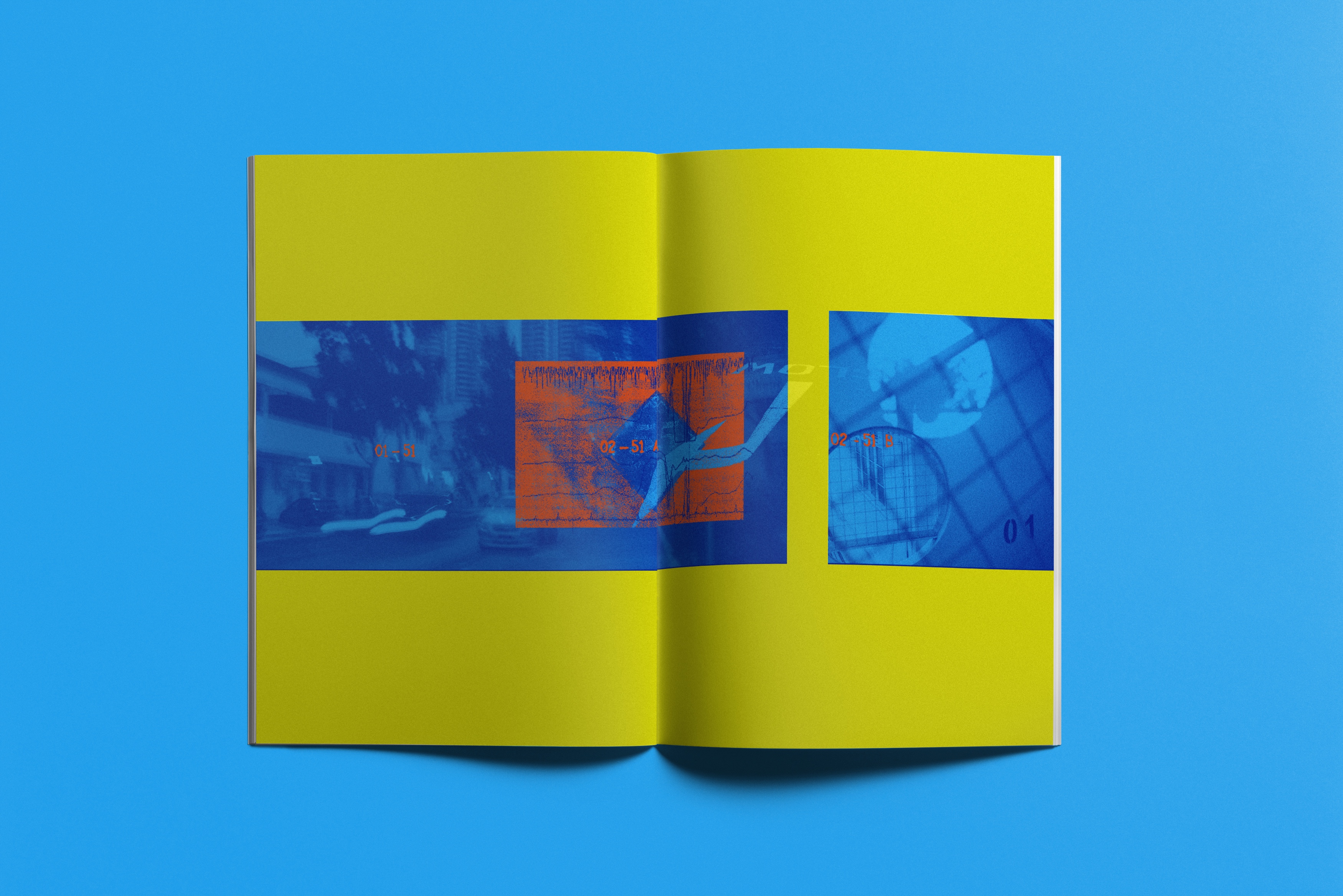 Tiong Bahru Conversation is at zine that describes the gentrification of the Tiong Bahru Art Deco Conservation Estate. It makes narrative with both physical displacements and visual metaphors of the sonograms generated from pivotal conversations with the consumers and residents at the estate. test print i — on fibrous paper.

The colours used in this Zine are drawn from the fluorescents of internet culture and picked from images taken at the actual site. 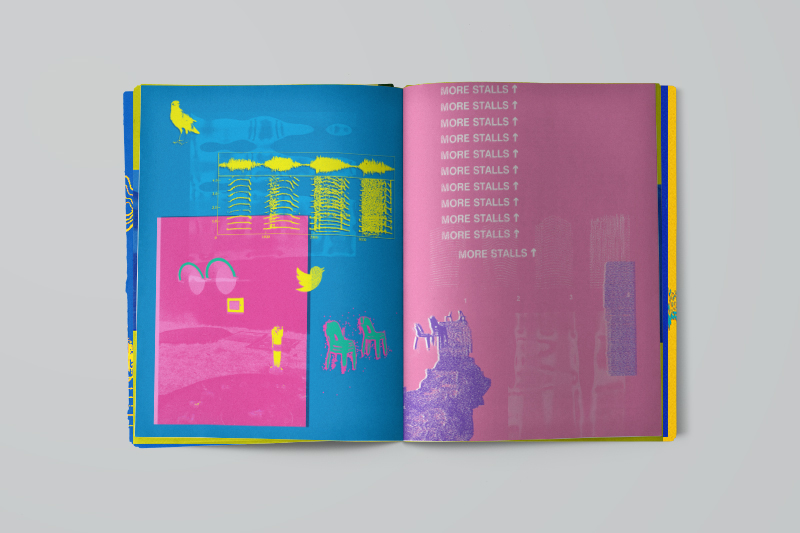 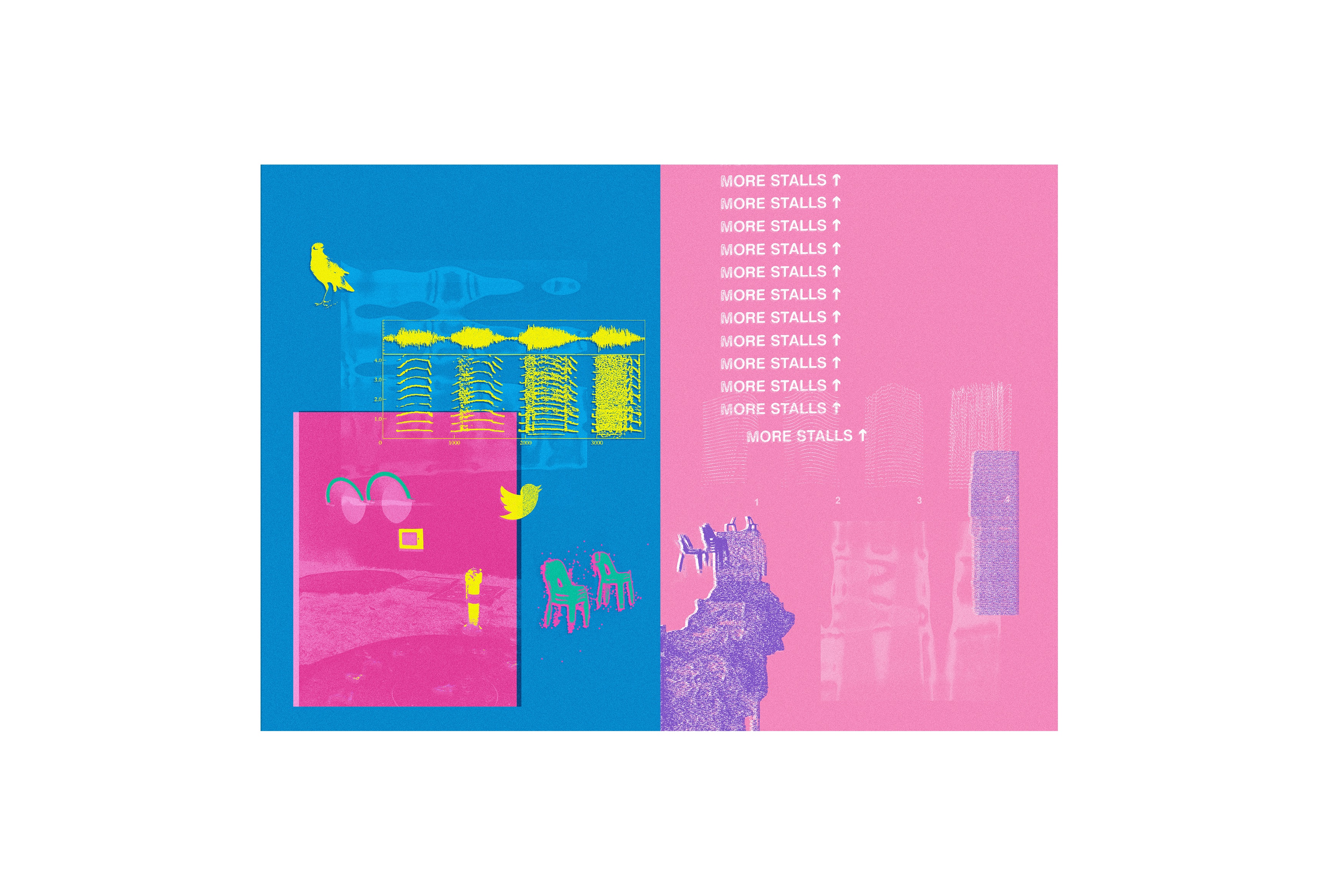 My first spread works around the tweeting of birds that are recurrent within the soundscapes of the estate. This sonogram is interesting visually due to its regular, almost rhythmic nature. I thought the tweeting was both iconic and metaphoric of the talks involving the commercialisation and gentrification of Tiong Bahru. I mixed in a twitter bird to allude to the notion of social media salience. The repeated and upward “more stalls” motif was extracted from a signboard in Tiong Bahru Market, and so have the other non-sonographic elements in this spread. 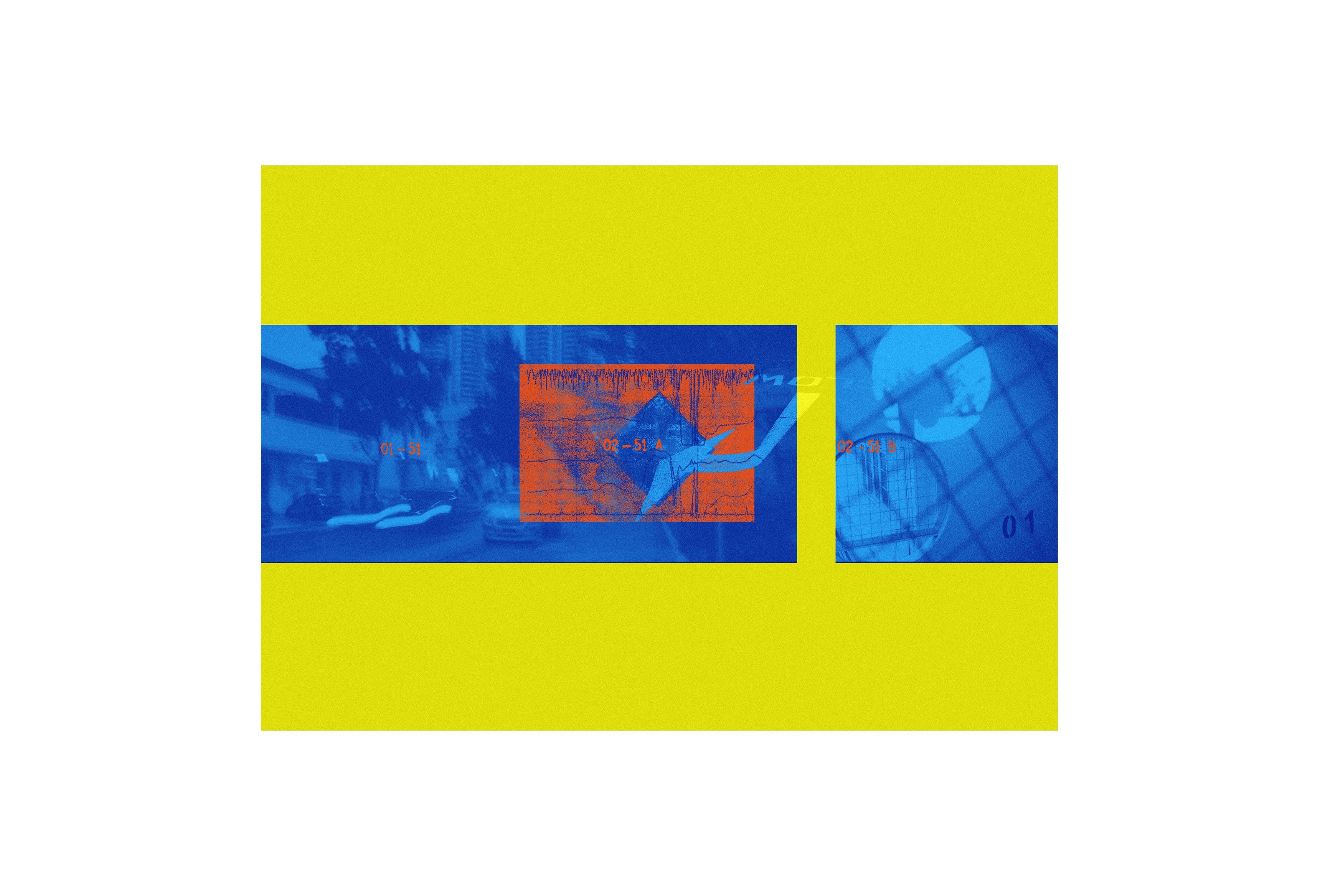 I wanted my centrespread to work through a horizontal dynamic. The sounded word I worked with in this spread was “slow”, which was significant to me because it seemed to be a favourite of the residents in the area. The irony is that the word “slow” connotes some sort of mellow, muted feeling, yet the displaced sonograms were choppy, almost anxious. I wanted to work on the idea of pacing in this spread. Therefore the road sign of ‘slow’ extracted from a photo taken at the site.

The photo on the left is a low-shutter image of the cars that buzz past in this slow neighbourhood. The image on the right is the view from the signature horseshoe staircase of a pre-war flat in the Tiong Bahru estate. The fuzzy sunlight alludes to a kind of morning, coupled by the number ’01’ that gives us the sense of pace. I then extracted the unit numbers from a  set of letterboxes and imposed them over the entire composition. The spread is cut at the centre by the signature geometric diamond signpost of Block 55, the first ever built flat in Tiong Bahru. 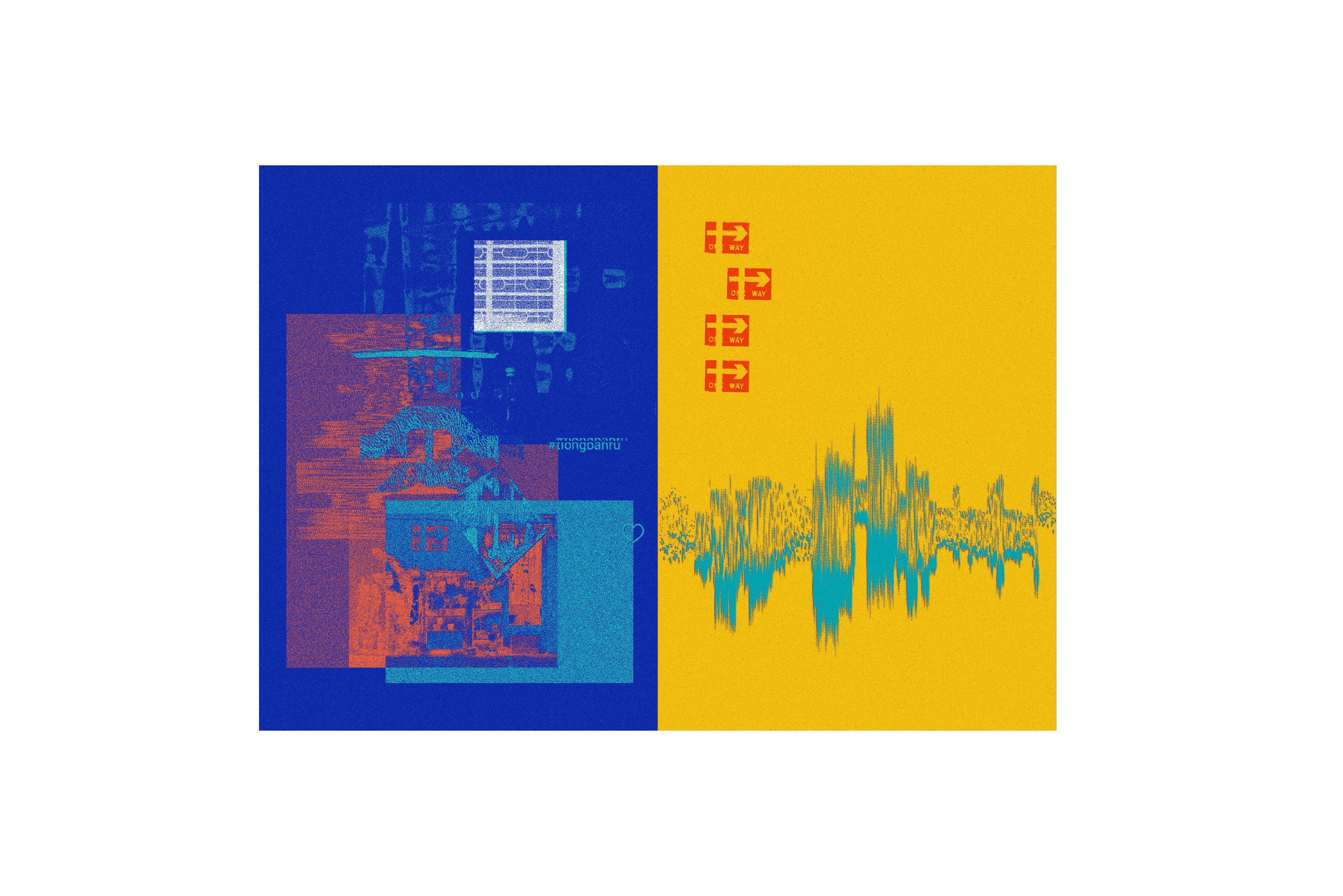 The third spread is a haphazard composition that literally and metaphorically expresses the exasperation in sounding the phrase “hashtag tiongbahru”.

Some elements such as the heart or ‘like’ icon and the ‘#tiongbahru’ element on the left page were extracted from a post tagged by that. The sonogram on the right reminded me of a pulse, which the ‘like’ icon alludes to. The sign ‘one way’ which was also extracted from the site, is symbolic of the decided dynamic of the estate and the pulse that is representative of its gentrification. 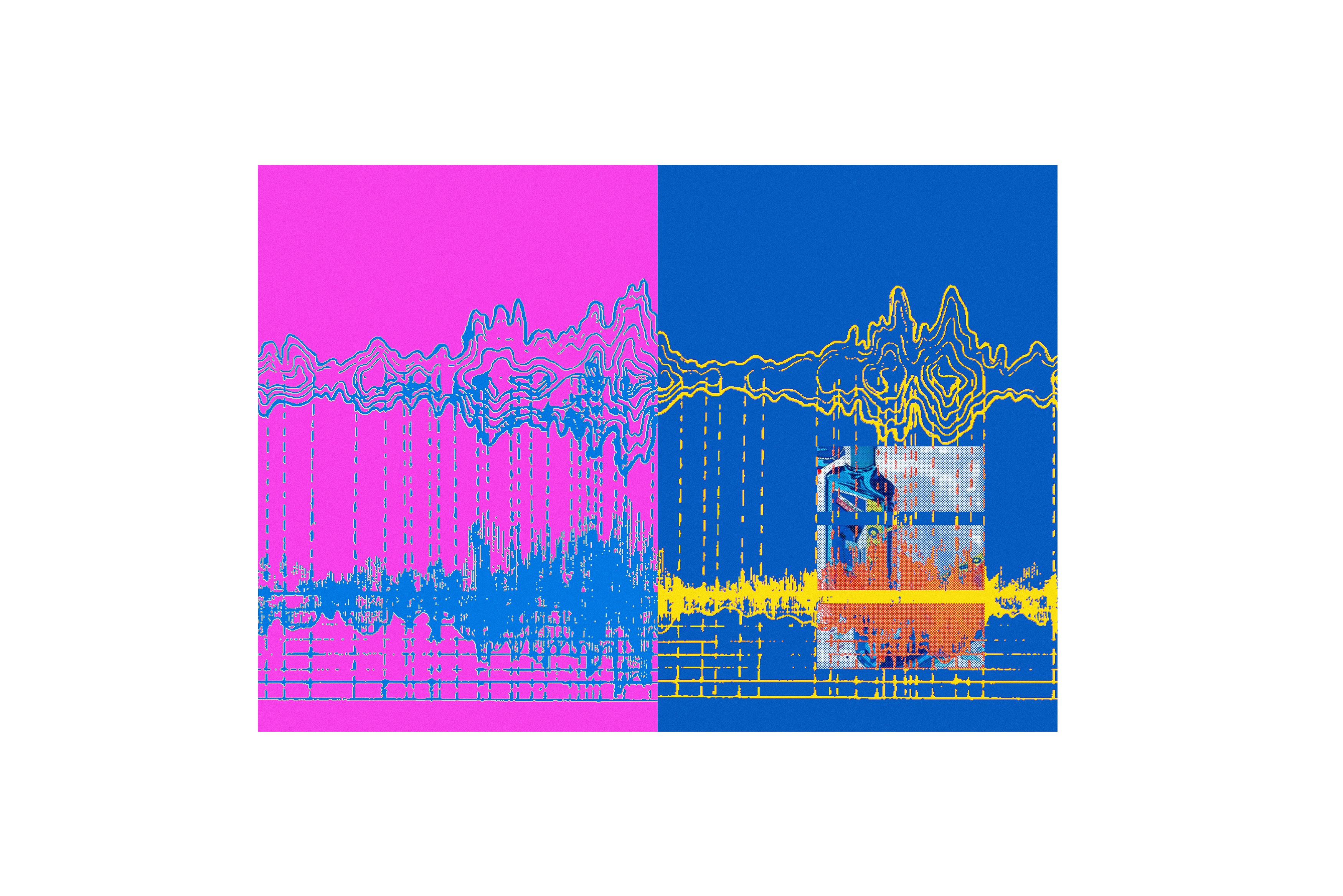 The outside covers are made up of “Tiong Bahru Conversation” sounded, and displaced into some sort of contour. The peak of the contours on the outside back leads into three layers of a lighter fluid poster found at the site. The sonogram at that point is orange stroked which reminds you of a burning.