Our installation piece is titled “Your Last 3 minutes”, and deals with the concept of time and death. In today’s fast paced society, individuals are so immersed with the current ongoings of their life that they do not stop to think about the (their) past or future. In this installation, we want to present individuals with the opportunity to have 3 minutes just for themselves, a time for them to immerse themselves in the self-reflexive environment we have created through projecting a series of questions in a dark room.

In this room, ‘time’ is personified as a questioning narrator, bringing the viewer through questions that follow a chronological order in accordance to their different stages or significant moments in life. The dark room simulates the internal mind of the viewer, providing a barrier away from reality and an enclosure that traps the viewer physically and mentally within the physical space and questions asked, of which places them in a situation where they are living their final moments. Viewers will be prompted to reminisce and reflect on what has happened in their life so far, and gradually start to realise that they are dying – which is subtly hinted by the last question of “Do I have time for one last…?” and a long beep that signals the end of their 3 minutes. Through this one-sided conversation with time, we thus hope viewers will have a renewed attitude towards life, and understand that despite the rapid lifestyle we live in, we should live life to the fullest for we can never know when it would end.

For this installation, a simple instruction will be placed outside the room that reads:

“Only one person allowed at a time.

You will be in this room for 3 minutes. Leave everything you have outside of this room. Enter, and walk to stand at the ‘X’ marked in the centre. You may leave once you hear a long beep.”

Viewers will then enter the dark room one by one, where they will be surrounded by 3 blank screens, one in front of them, and two on each side. When the viewer is in position, the artist will screen the first question projected on the screen directly in front of the viewer. The questions will be in white against a black background, and will be screened at intervals of 30 seconds. From the third question onwards, questions will start to appear on the second and third screens on their sides, following which questions asked on either screens will appear at varied intervals. At the last 15 seconds, all screens will be blank once again, and the last question will be screened on the screen in front of them. A loud, long beep will signal the end of the viewer’s 3 minutes. 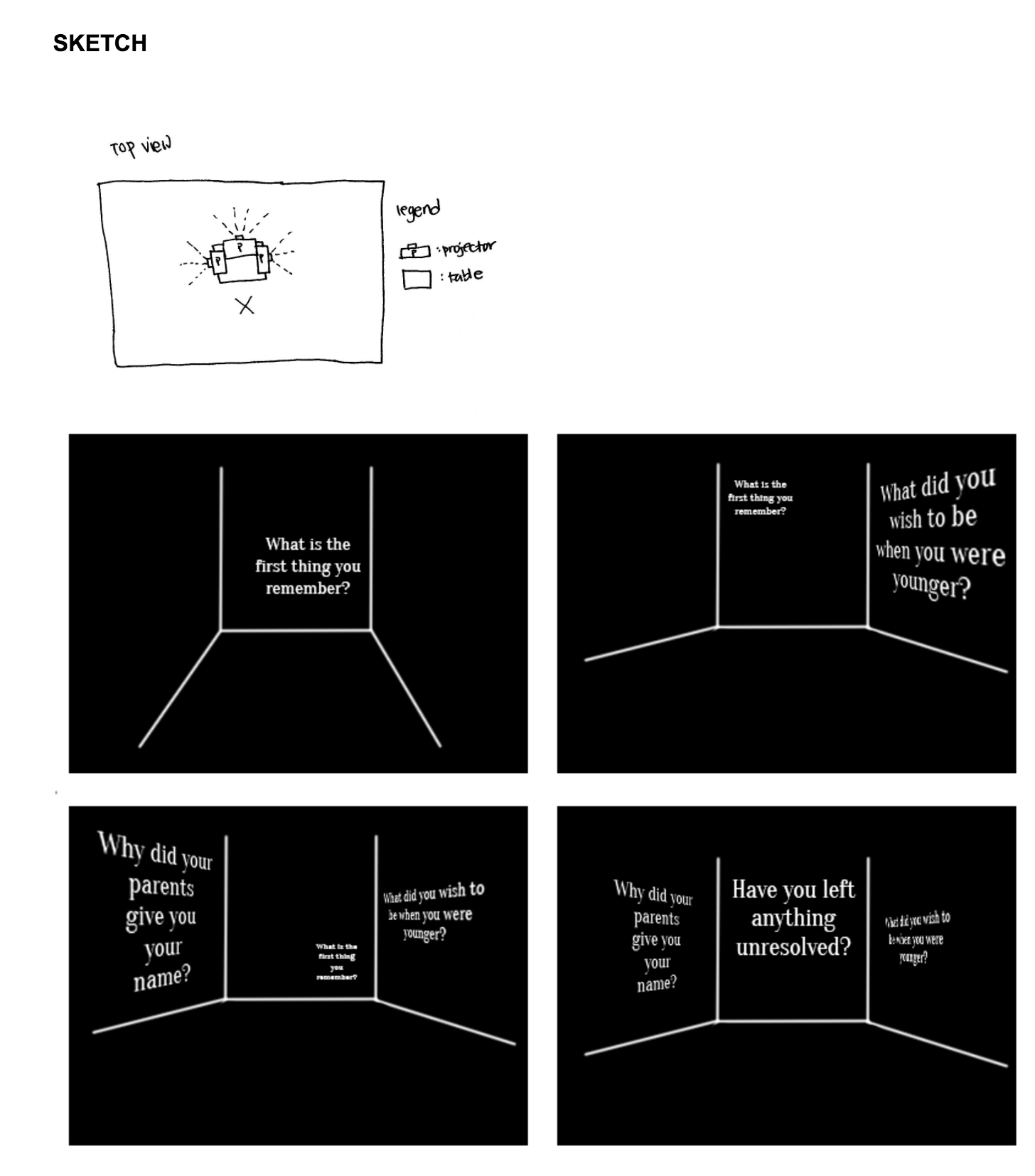 We decided to further develop Veda’s Alter Ego project, which was about her present self writing a letter (narrated) to assure her past self. Since the concept of time in her project was a medium for the present to go back to the past, we decided to explore time as a subject instead of a medium. Hence for this project, we thought it would be interesting if we personified time as a person, conversing with the viewer about how they have spent their time.

The viewer is hence not only going back in time to their earlier days, but will also go through the ongoings of the present. And as time converses with them further, they will be prompted to think about what could possibly happen in the near future.

After selecting the questions, we moved onto selecting the font that we were going to use. The mood of the font had to be formal and serious. We were looking for font that is similar to Times New Roman. The final font that we decided on is Roman Serif, which was slightly fatter than Times New Roman but still retains the formal tone to it. Since the installation uses only the text, the positioning, spacing and size of the text had to be considered. It could not be too narrow, easy to read but not overwhelming.

The order of the questions are chronological. It begins from the viewer’s very first memory, following through to their time spent as a child to guide viewers in remembering their past. The questions then start to merge together in terms of past, present and future, weaving viewers in and out through their entire lifeline. Towards the end, the questions then start to have a more ambiguous connotation, questioning how the viewer feels at the present moment, before ending with a question about time – “Do I have time for one last…?” This question serves as a subtle warning that the viewer actually has a limited amount of time left, prompting them to think of any experience they still yearn to have, but thought process will be cut off by a sudden loud sound that signals the end of their time (metaphorically and physically in the installation space).

Drafting it on paper 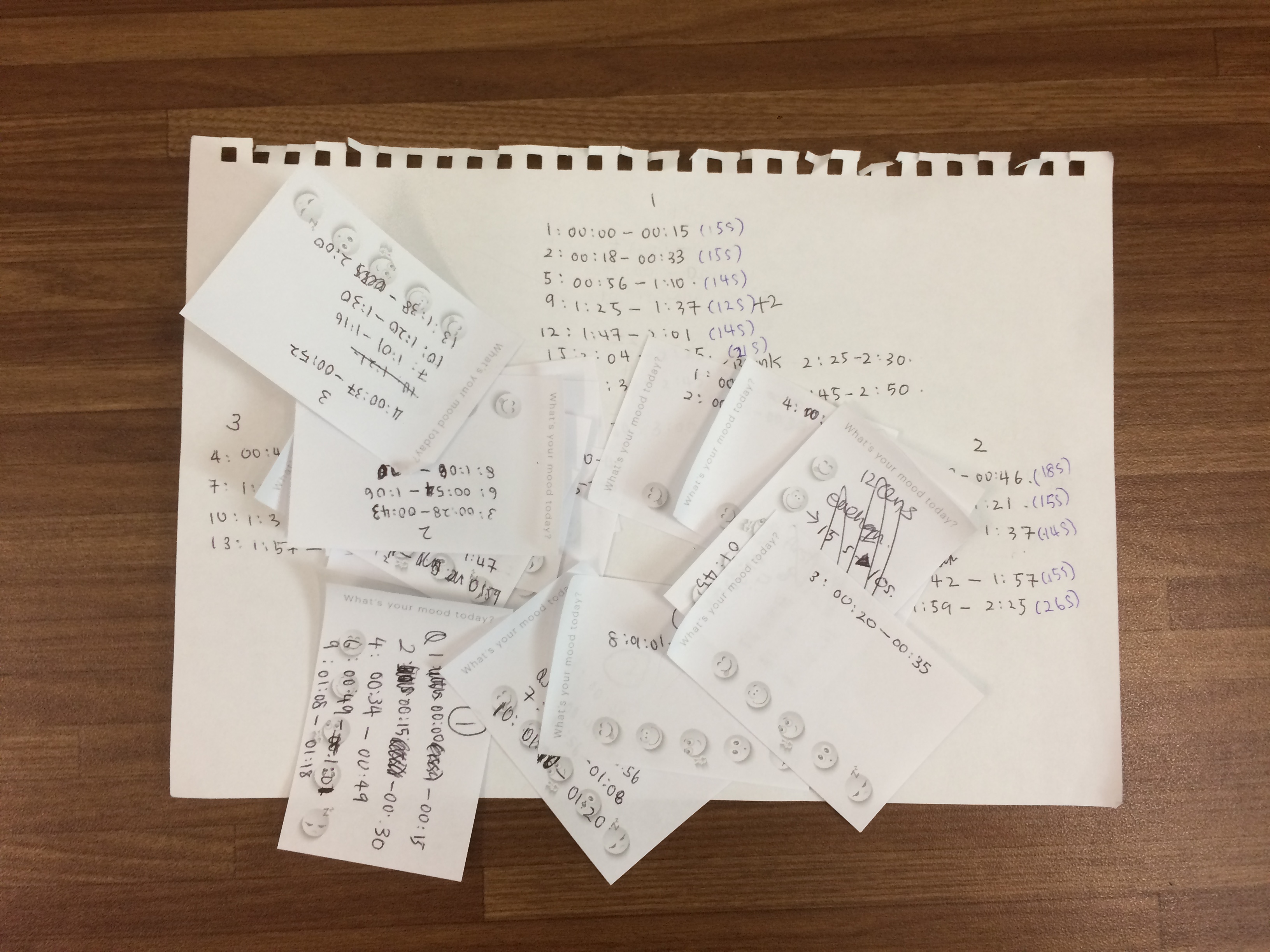 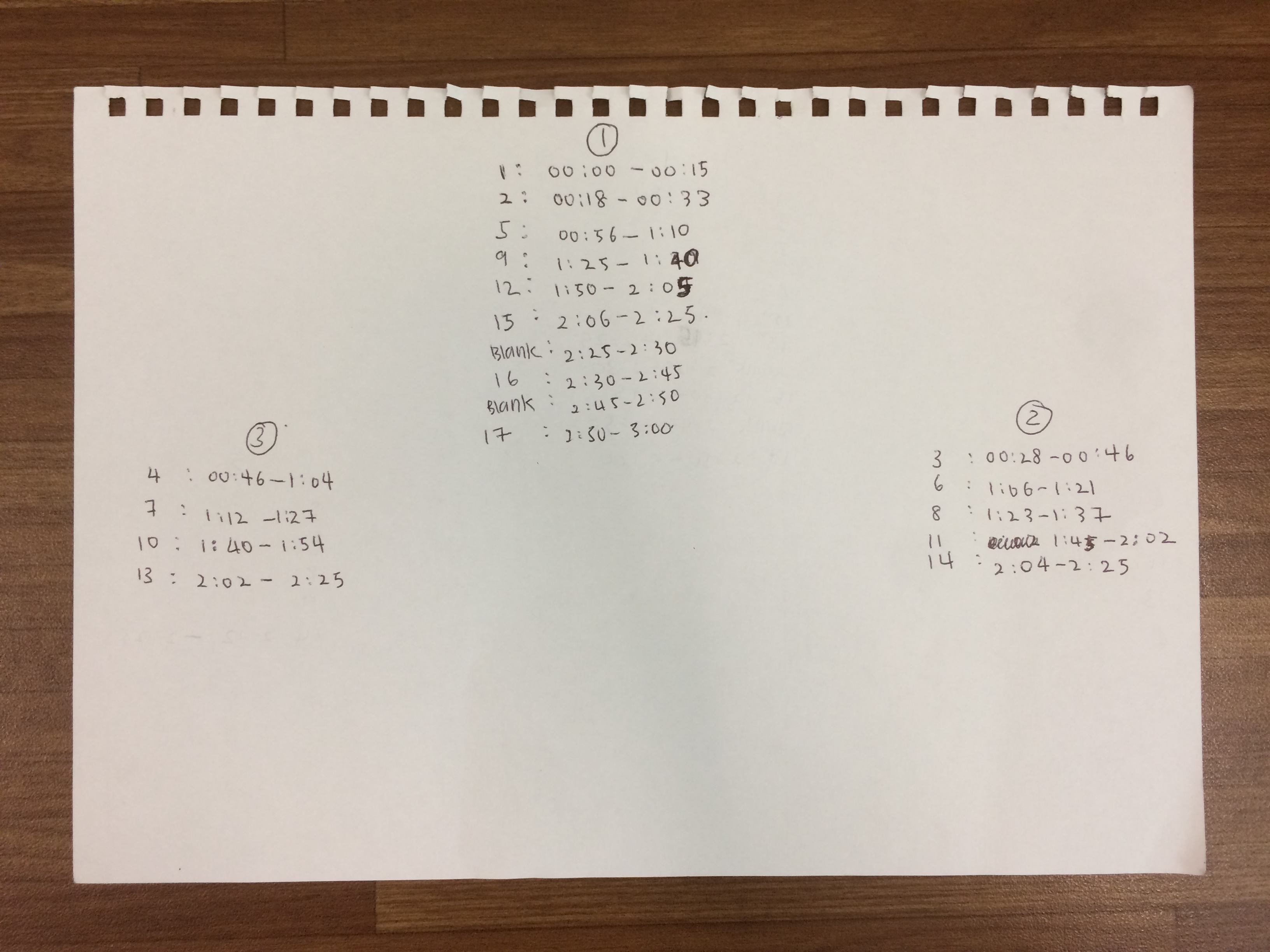 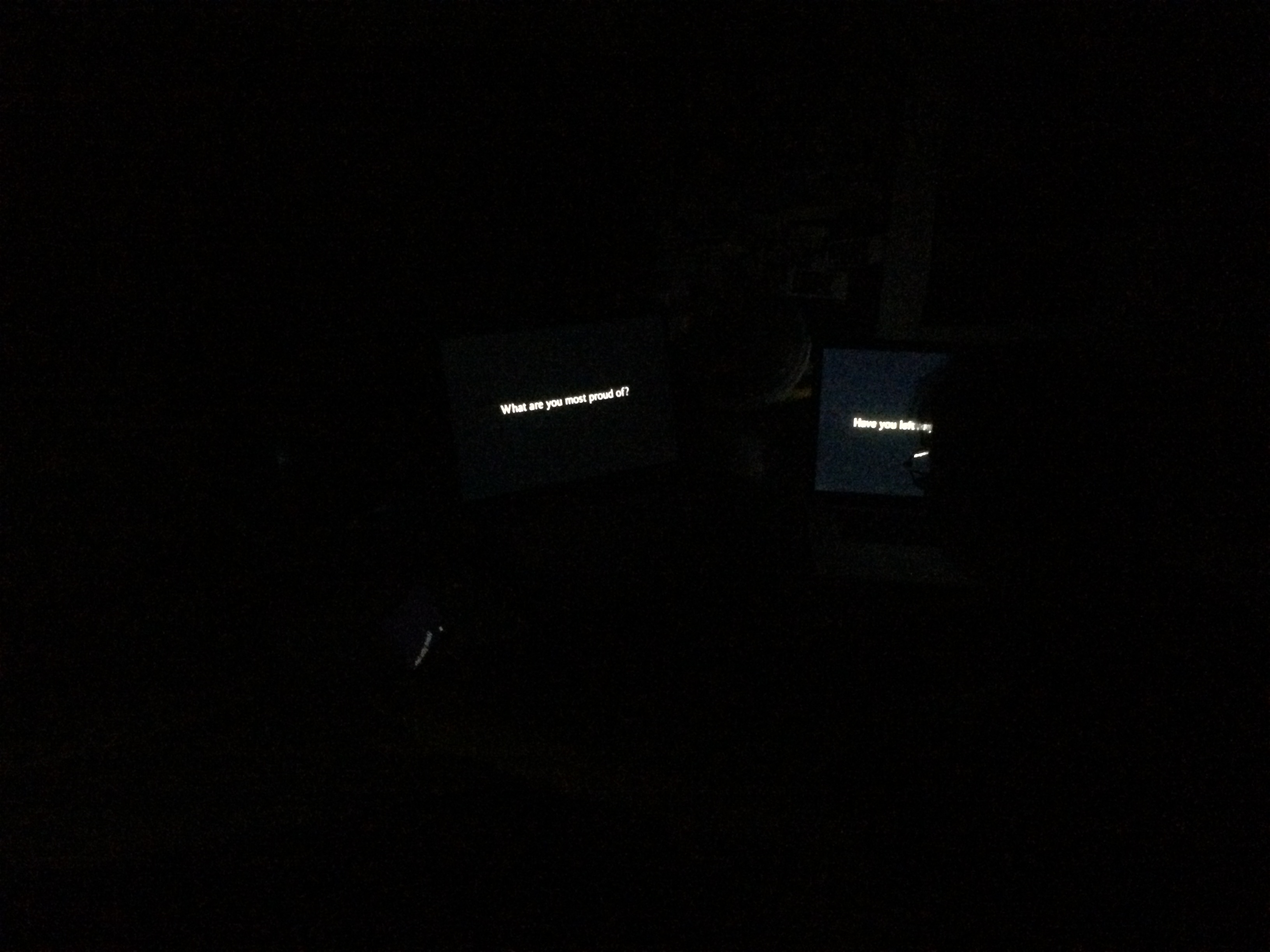 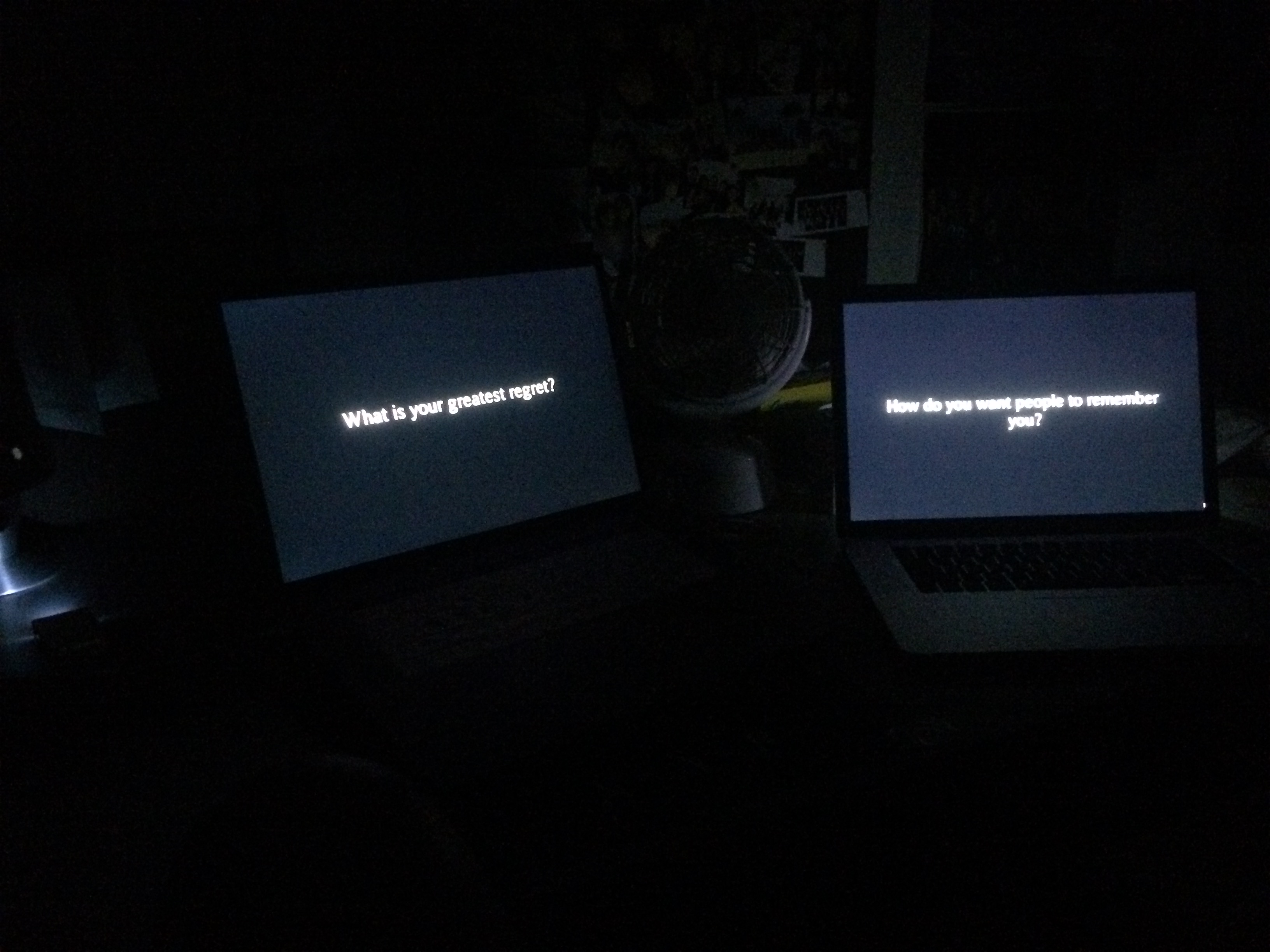 Trial on iPhone as Screen 2 For our installation, we wanted to have a dark room to simulate the mind, and what someone who had only 3 minutes left to live would think about. We also hoped it would create an intimate space for time as a person to converse with the viewer, engaging them in a deeper thought process. Hence, in pacing the questions, we made the assumption that a person’s thoughts would be slower in the beginning before they become slightly frantic as they realise their 3 minutes are ending. We thought having the viewer surrounded by 3 screens would help to mimic the thought process where question after question appeared in different parts of the mind. 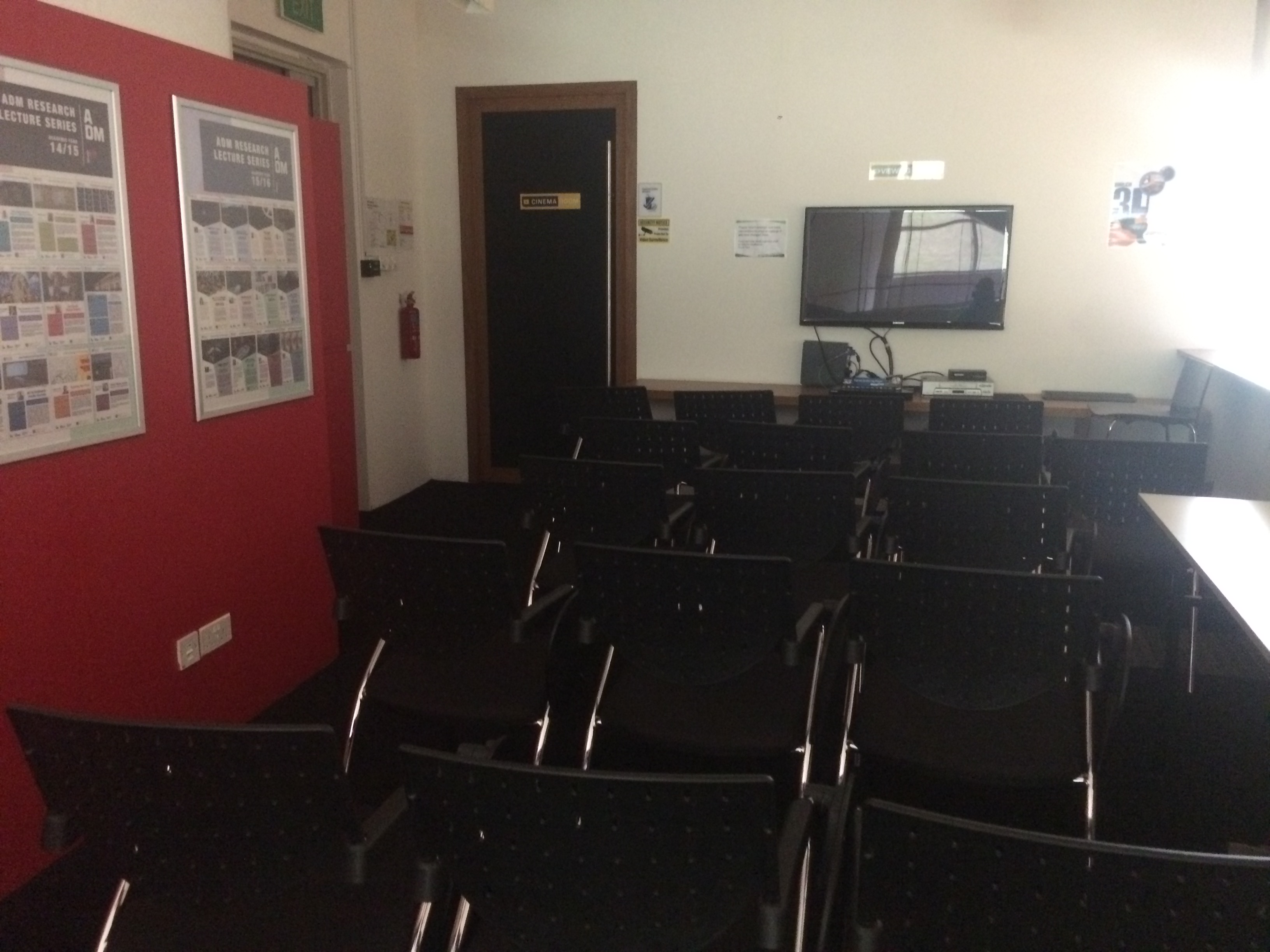 “Waiting area” set up for viewers

Installing the projectors needed a bit of adjustments due to the scale of the room. Since we wanted the viewers to be surrounded by the questions, we had to use 2 walls adjacent to the front screen instead of the walls slightly further back along the sides. The distance between the two walls facing each other was not long, which caused the projector screens to appear smaller than expected due to the limited distance. As a result, the screens were not as large as we hoped it would be. We also had to prop the projector up on high chairs or books and boxes for the questions to be screened at a comfortable viewing position. The walls were covered with soundproof sponge, and so in order for the questions to be read clearly, we used mahjong paper to cover the walls to provide a smooth, even surface. 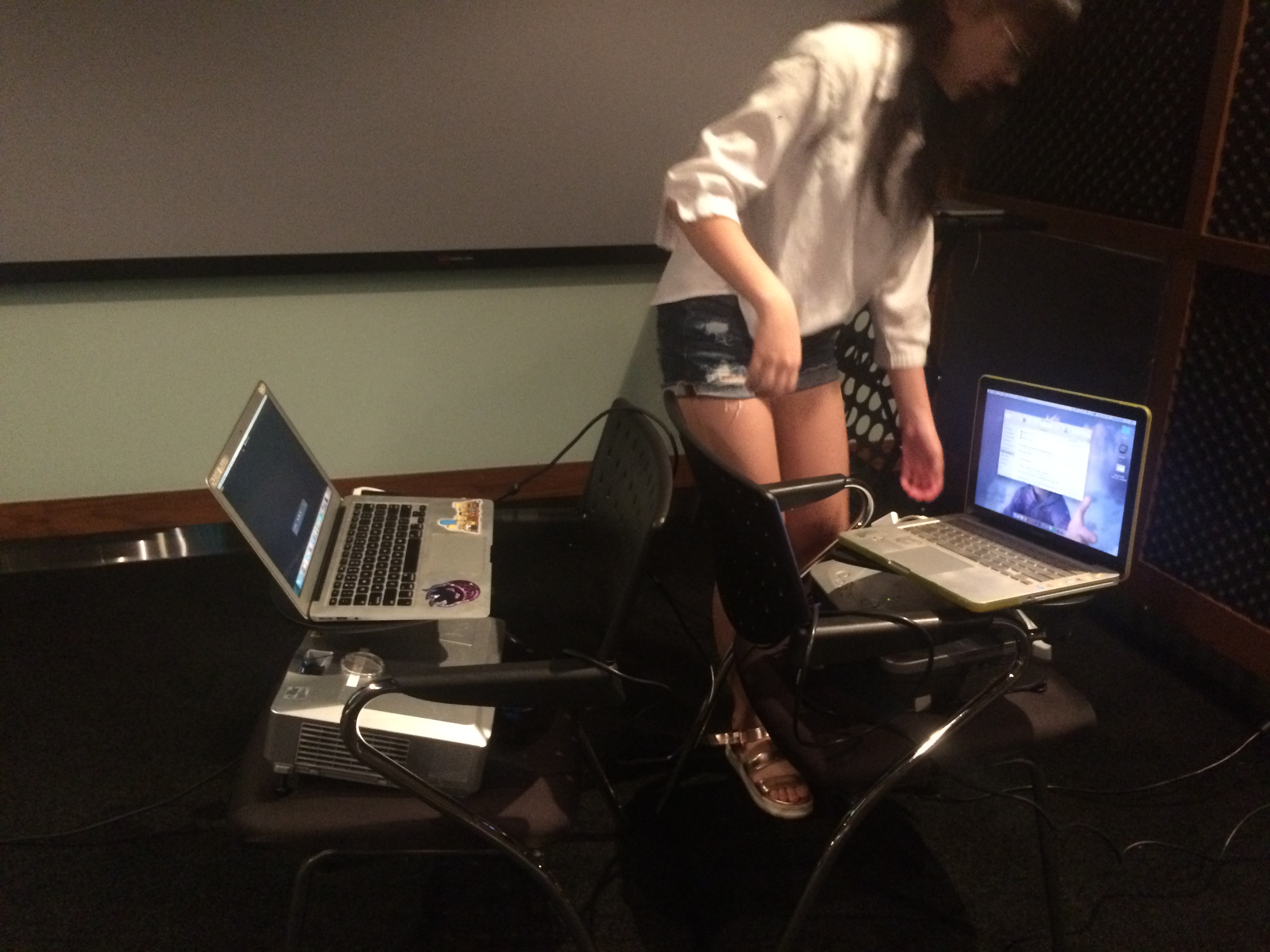 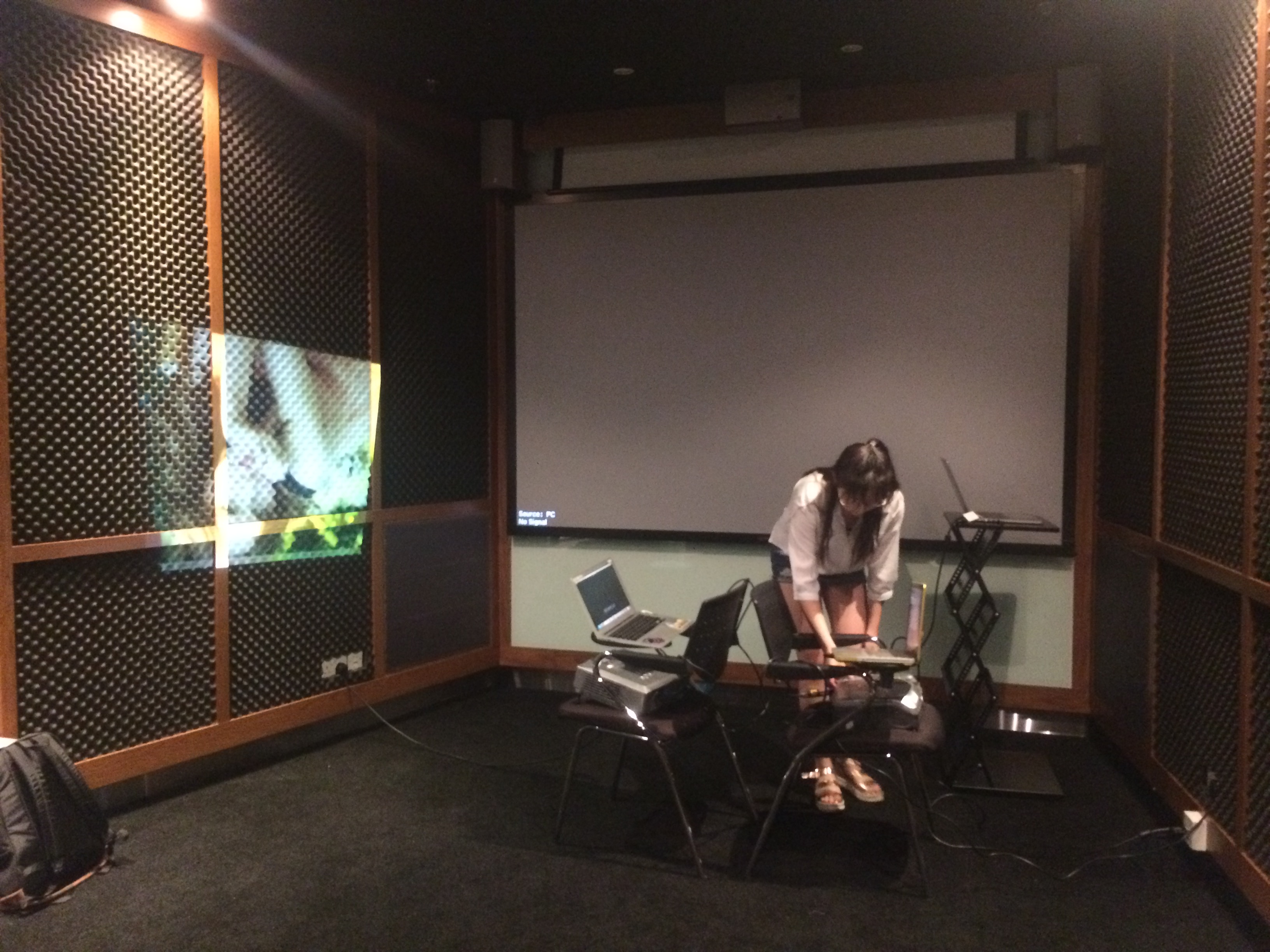 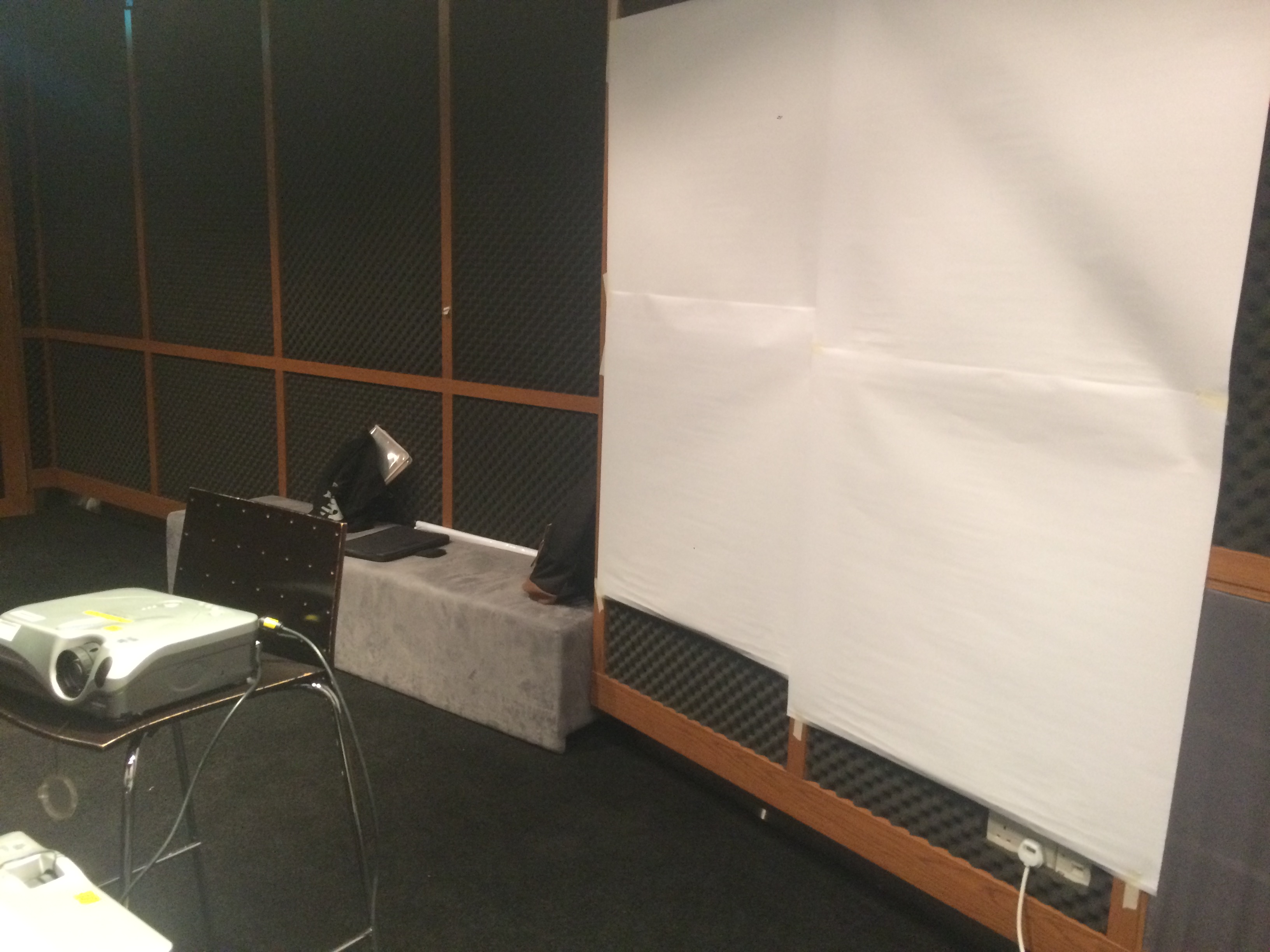 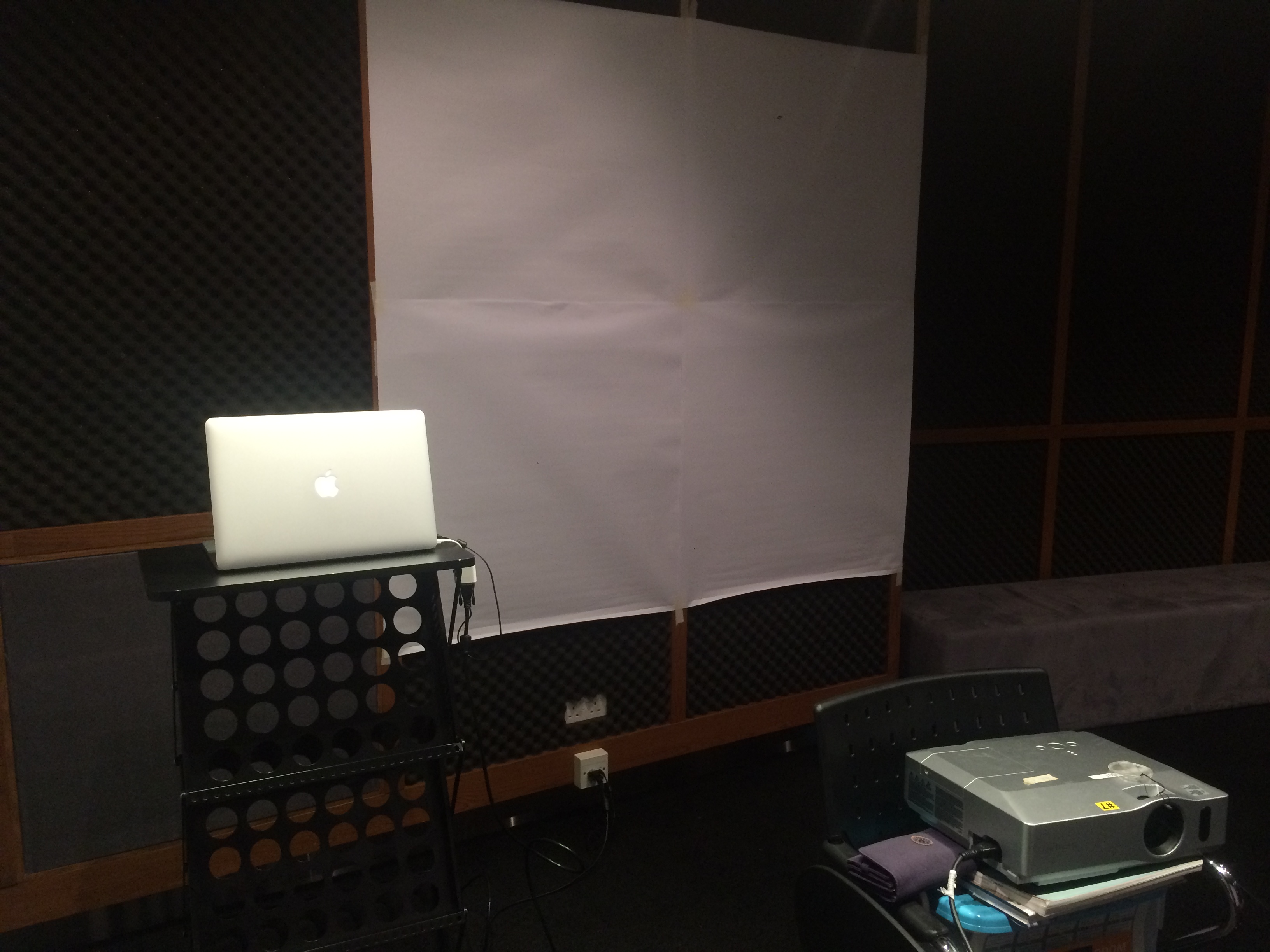 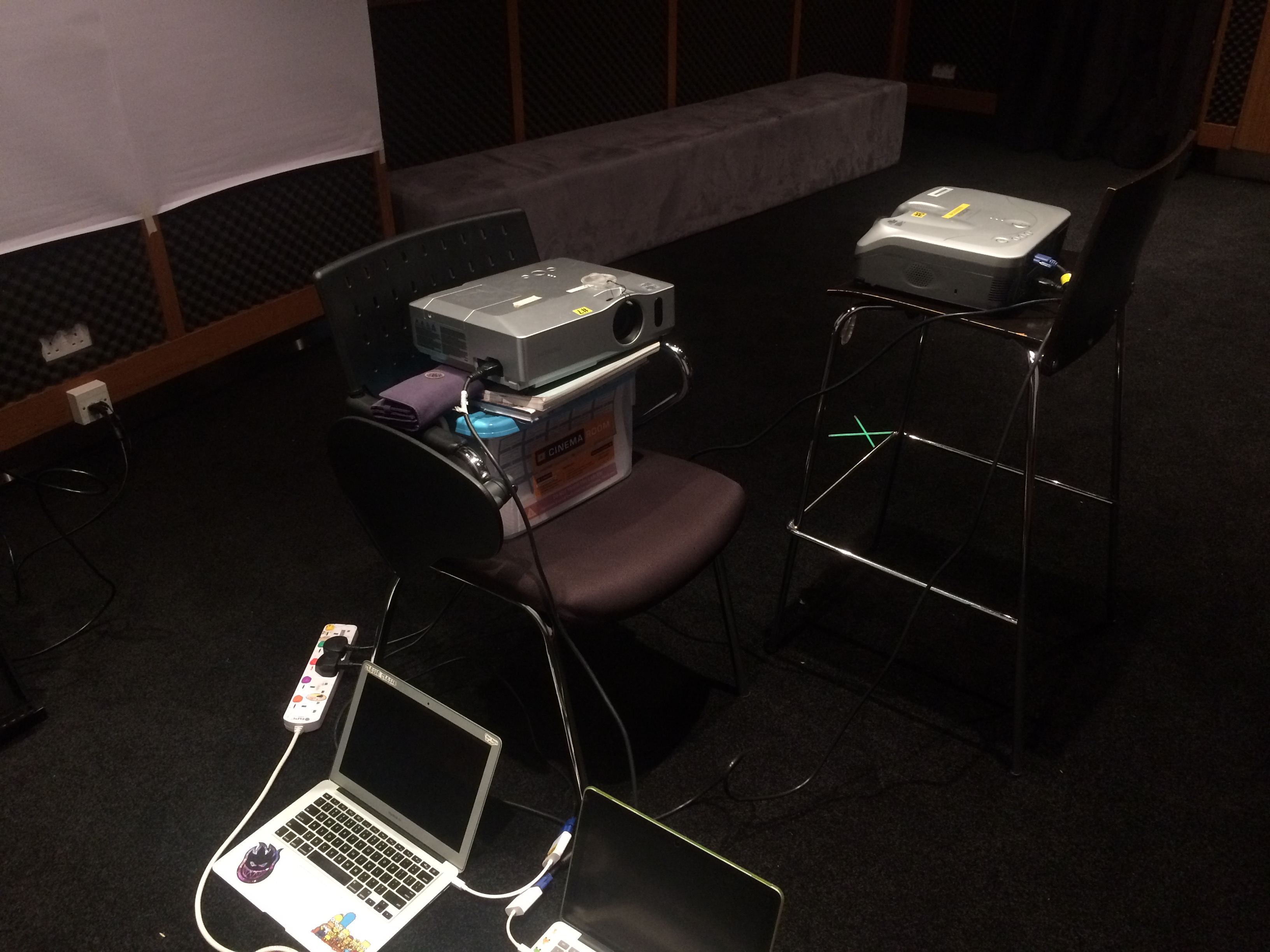 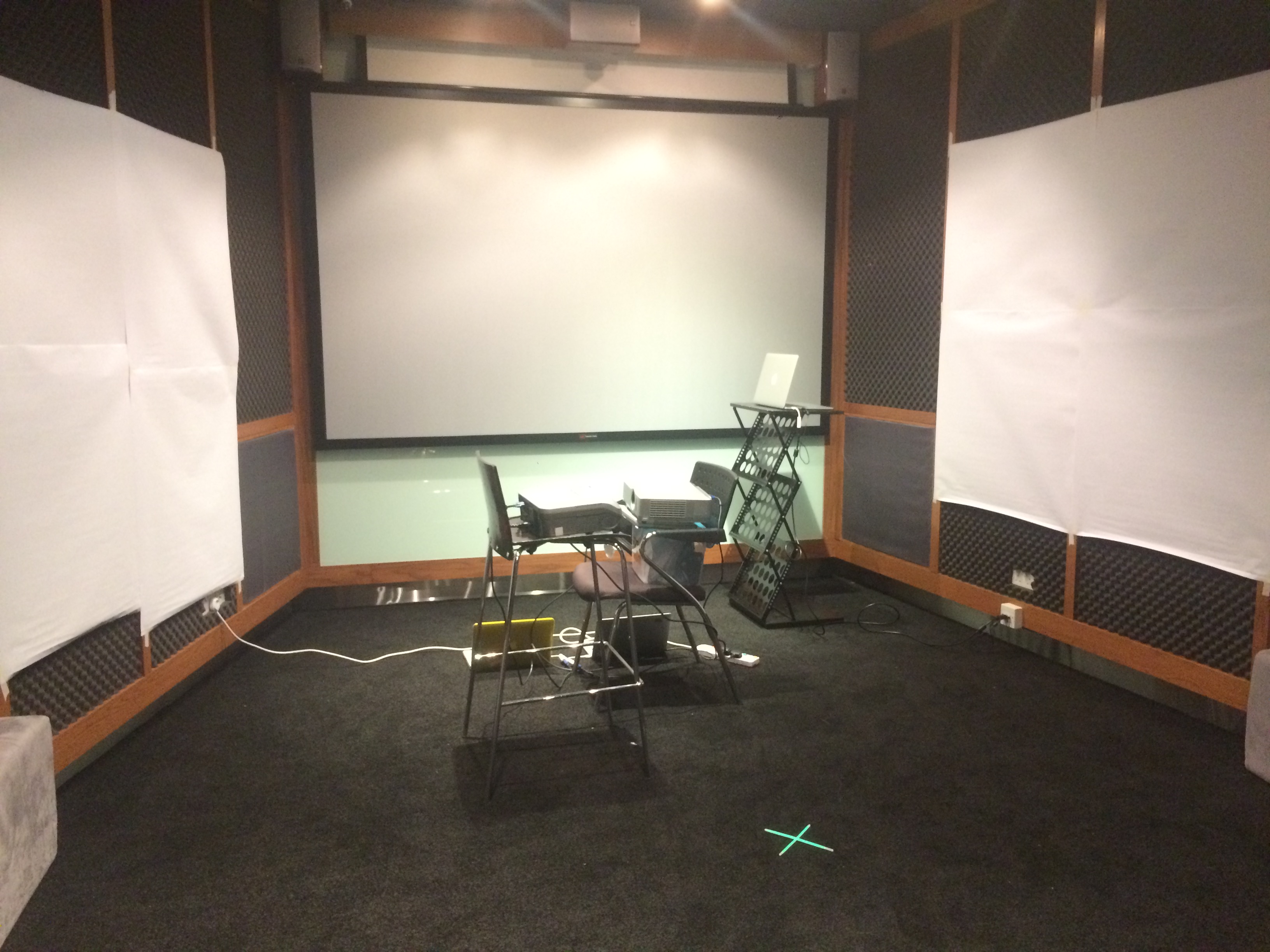 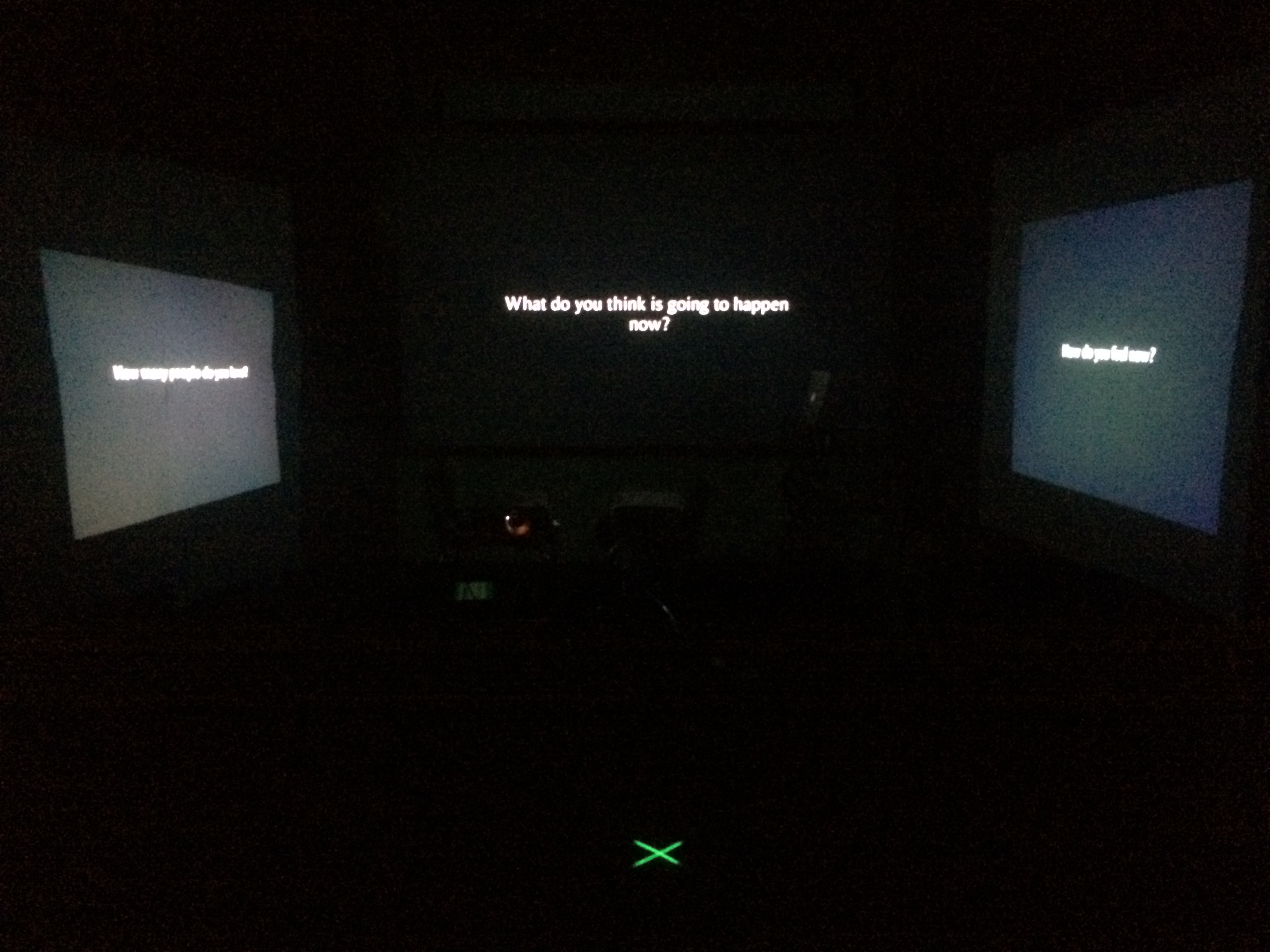 In the ideal situation, we as the artists would not be in the installation space. However, we were unsure how long the viewers would take to enter the space and be ‘ready’ for the questions. Since the questions also followed a chronological order, we did not want the viewers to enter at random moments to various questions. Hence, we had to be within the space to control when the videos could be played on screen. This is perhaps one aspect we can work on should we wish to further develop this project further in the future.

As viewers started coming in, there were expected and unexpected reactions. Most of the people were surprised by the sound at the end. We did not expect some people to react to the installation audibly, as it was supposed to be an individual experience (but due to time constraints we had to group people together). Even though it was a surprise, it did provide some insight for us with regards to what the viewers understood from the installation.

This project was quite enjoyable for the both of us, since we have never worked on an installation piece before, especially a conceptual one. It was quite difficult for us to think about a concept, especially one that stemmed from our previous projects and the fact that it was site-specific. Although we struggled a lot, it was all in all quite a rewarding experience when we finally presented our project. 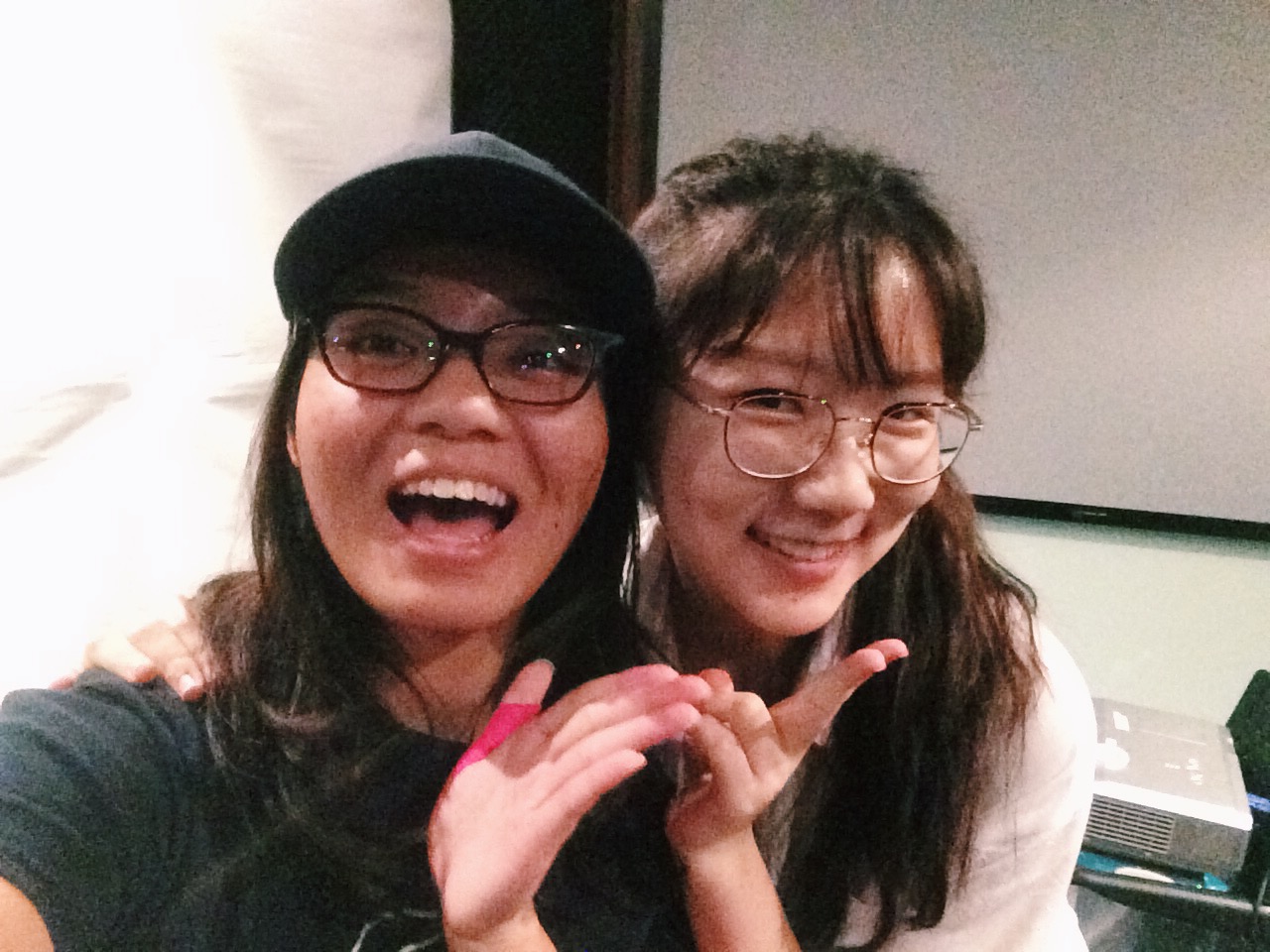 We hope you enjoyed the experience!!

Thank you for reading 🙂  Till next time!