TASK: Research existing examples and projects of wearables recontextualizing biomimicry- the imitation of the models, systems, and elements of nature for the purpose of solving complex human problems.

Biomimicry is an approach to innovation that seeks sustainable solutions to human challenges by emulating nature’s time-tested patterns and strategies. The goal is to create products, processes, and policies—new ways of living—that are well-adapted to life on earth over the long haul. 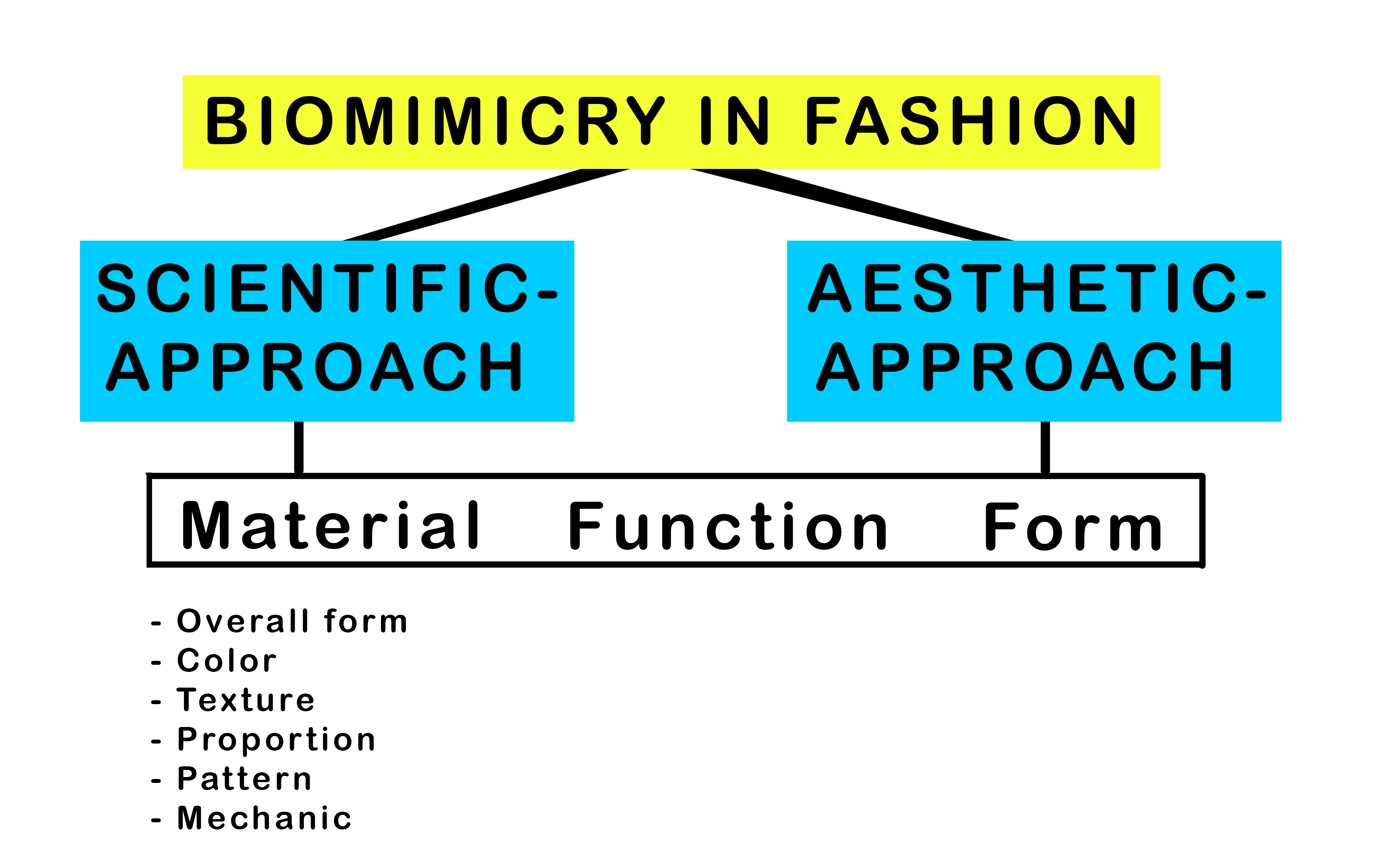 While researching, I found several examples of biomimicry in fashion and realised that they could also be categorised into the Science/Aesthetic approach I previously used on what wearable tech was to me.

I felt that technology and the innovation of new textiles that mimicked solutions/mechanics/science from nature were a more scientific take on biomimicry.  On the other hand, a more aesthetic take would be a more direct and visual representation of biomimicry- like designs that mimicked patterns found in nature. I felt like the definition of biomimicry in the project task was more aligned to the scientific-approach rather than the aesthetics. However, I will still be including some examples of both in the following paragraphs!

The following examples,  practices the use of the marvels of nature and its functioning for developing new innovative technology. Many innovative textile products have been engineered using biomimicry.  They serve a more functional purposes, being purposefully created with specific properties and intended uses 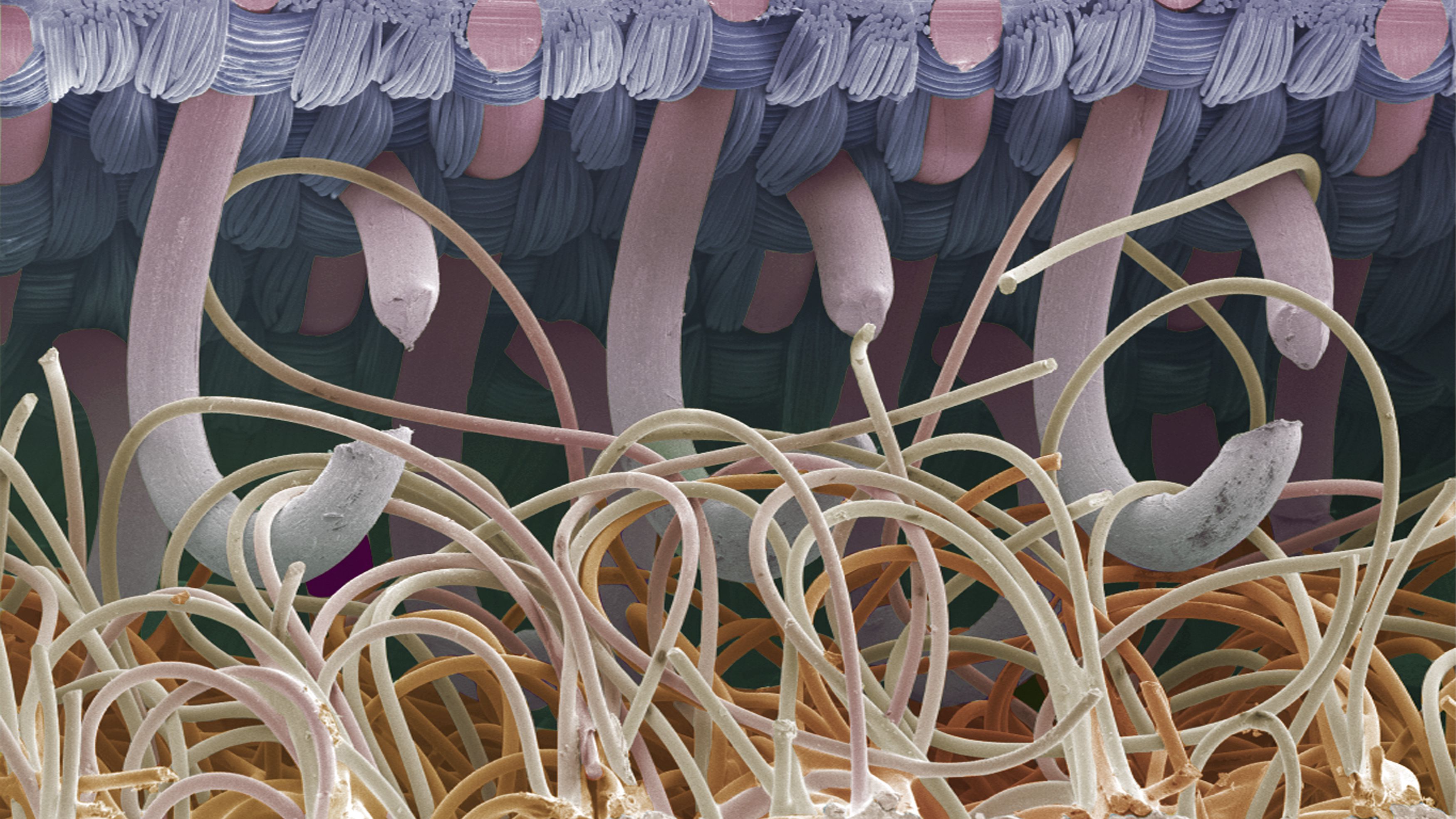 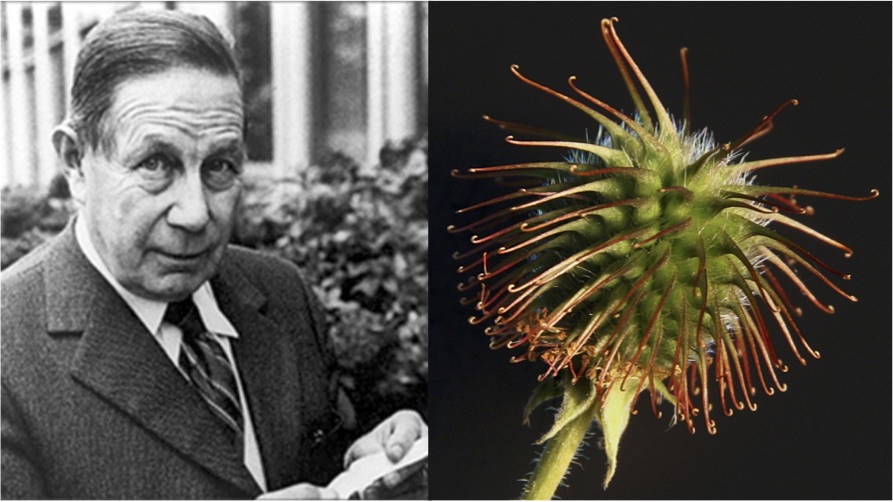 Invented in 1948, Velcro has become a textbook example of biomimicry – an emerging science that emulates nature to solve human problems. After a walk in the fields, George de Mestral noticed burrs stuck to his trousers and his dog’s fur, which led to his creation of a new hook and loop fastening device that we know as velcro

Water spilled on a lotus leaf does not wet its surface but beads up and rolls off, also cleaning its surface from accumulated dust and dirt. This effect is known as “superhydrophobicity”. Researchers have mimicked this process to create water-repellent and self-cleaning materials and fabrics.

Inspired by sharks’ sandpaper-like skin that reduces drag in water,

Researchers studied the swiftness with movements of sharks under water, and found that a sharks’ sandpaper-like skin reduces drag in water. Inspired by this, they developed their own material that reduces friction caused by human skin, while swimming under water. Speedo’s Fastskin line of performance-enhancing swimwear was thus created and helps one swim faster and  more smoothly.

BIOMIMICRY LEVEL: Kind of both scientific and aesthetics? Borrowing the form/structure and texture of the sharks skin to apply it for a human-use context

A group of researchers from PennState implemented a new way to produce fabric in order for it to be self-healing and act as a barrier between the bearer and the outside world. By dipping the fabrics in several liquids, they create layers of material that then form a polyelectrolyte layer-by-layer coating. This process was inspired by polymers present in Nature in the form of squid ring teeth proteins, where positively and negatively charged polymers compose the polyelectrolyte coating. For the coating to protect the human body, enzymes can be incorporated into it during the layering: when matched to the harmful chemical being targeted, the enzymes would make the coating tailored to protect the wearer from being contaminated

BIOMIMICRY LEVEL: Feels very scientific as the level of biomimicry is down to a microscopic level, trying to emulate the cellular process that nature has.

There are a lot more similar examples of biomimicry in textile, such as warm clothing, inspired from the thermal insulation properties of a polar bear.  Or dye-free coloured fabric inspired by Morpho butterflies’ wings which appear cobalt blue despite lacking any colour pigment.  Or a fabric that imitates how a squid changes colors, by expanding or contracting their pigment-filled cells.  By taking inspiration from these underwater colour shifters, scientists are taking the first steps towards developing self-camouflaging clothing that could be a boon to the military

The following examples, don’t really serve a functional purpose or solve complex human problems as they function as mainly works of art. However, they still make use of biomimicry in their designs. make fabrics self-healing using conventional textiles. So we came up with this coating technology. For the coating to protect the human body, enzymes can be incorporated into it during the layering 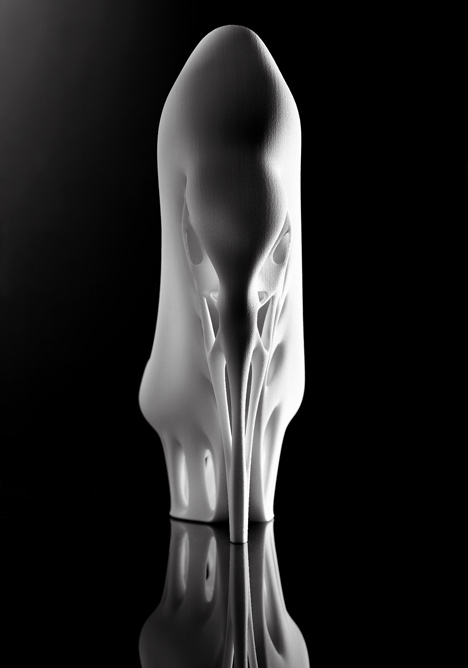 Nature has been the main source of inspiration for the making and shaping of this shoe. Ratsma and Spaho used the shape of a bird’s cranium for the front of the shoe, with the tapered beak as the spike of the heel. The idea for this shoe highlights the aesthetics and the shape of the bird skull, along with the characteristics of the lightweight and highly differentiated bone structure within the cranium.

BIOMIMICRY LEVEL: Leaning  towards aesthetics, as the form of the shoe itself directly borrows the anatomy of the bird. Very appearance based mimicry. I feel like there is not much science-approach in this as its a very visual surface-level work, lacking a deeper conceptual meaning that is inspired from processes/behaviors we see in nature. 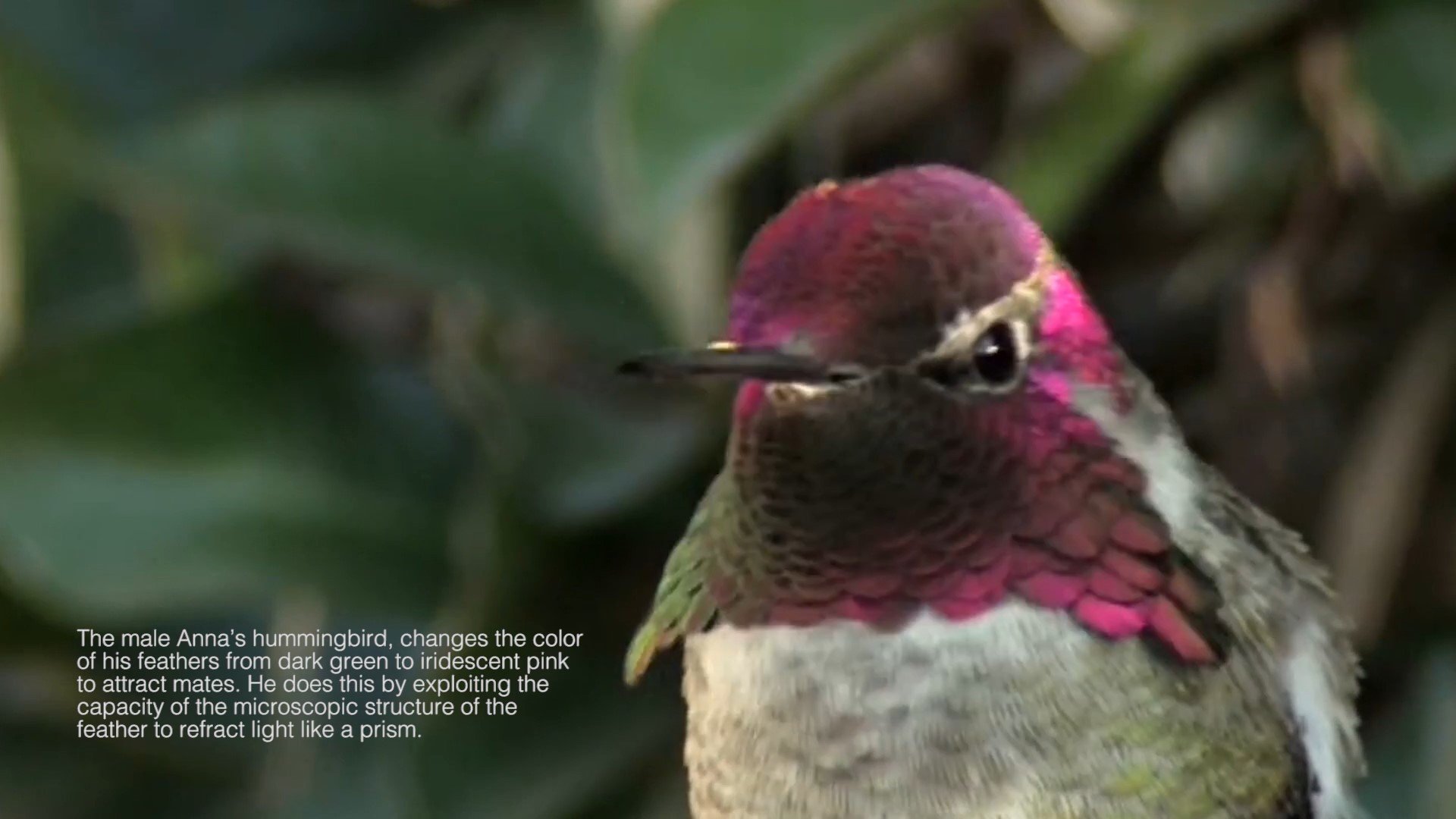 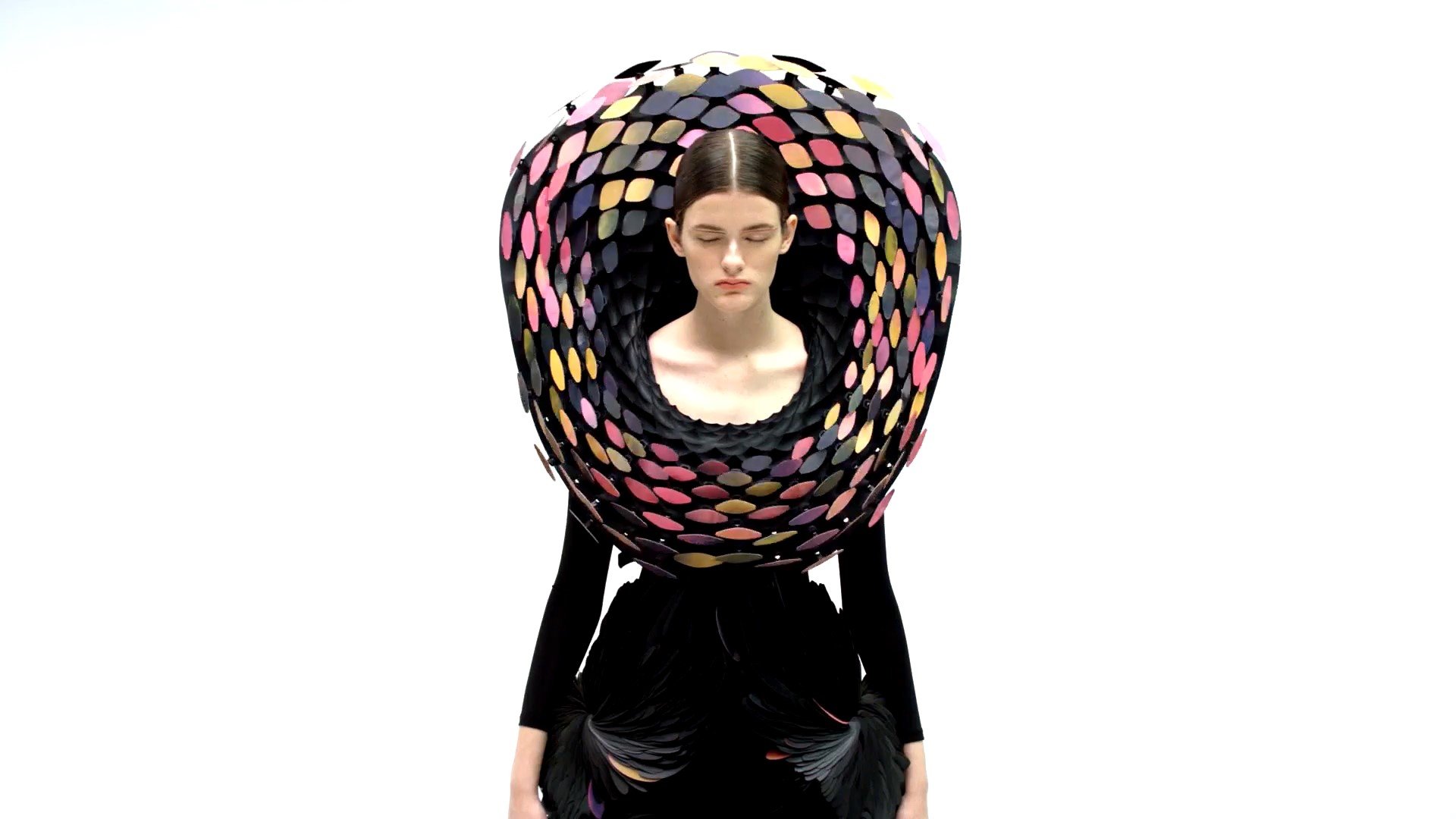 The male Anna’s hummingbird has feathers around his throat that appear completely green, but  can turn  into an iridescent pink when he moves.  This is how the Anna’s hummingbird attracts mates during his spectacular displays of aerial courtship. Iridescence is an interactive collar, inspired by the gorget of the Anna’s hummingbird. It is equipped with a facial tracking camera and an array of 200 rotating quills. The custom-made quills flip their colors and start to make patterns, in response to the movement of onlookers and their facial expressions.

BIOMIMICRY LEVEL: Both  science and aesthetics, but a less direct copying of a hummingbird. Aesthetically borrows the visual language of the humming bird feathers, and has a very similar appearance. However, Farahi created his own material that uses lenticular science to mimic the color changing feathers of the hummingbird. The logic/system behind the why the custom-made quills also mimic the mating process of the hummingbird, making use of a deeper level of biomimicry

While researching, I found some research papers online that are related to the topic. I especially liked the paper “Nature Inspired Clothing Design Based on Biomimicry (2016)” as it was elaborate/detailed; and Anzabi gave numerous good examples, that I did not mention above.  He even had the same method of classifying the different levels of biomimicry in clothing design as me.