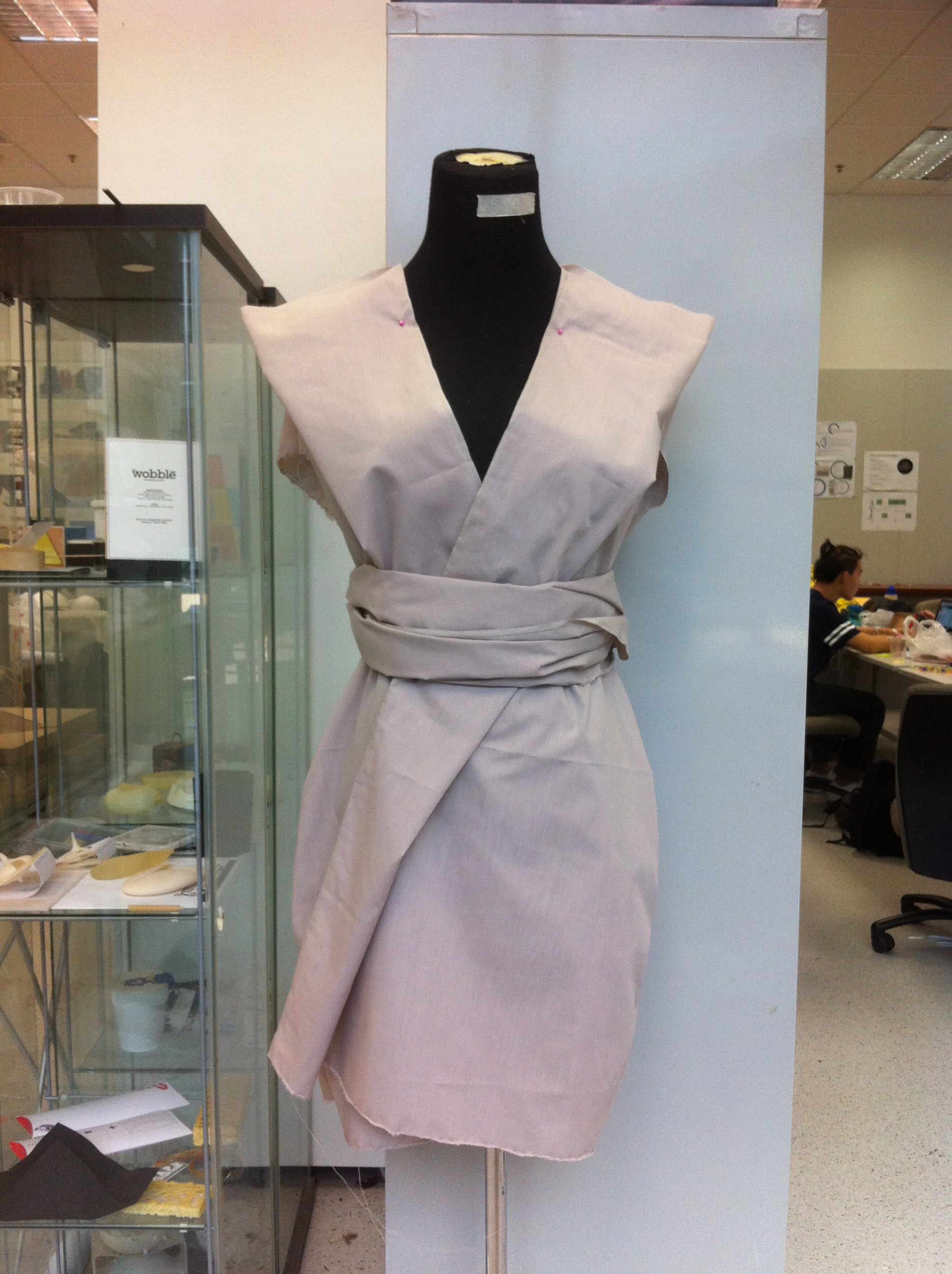 For the project Touch, I got the role of being the heroine. Hence, based on the initial design that I have made, the kimono-inspired outfit may fit a female warrior. Using $2/meter (the cheapest fabric available), I created a prototype of the mini kimono dress. 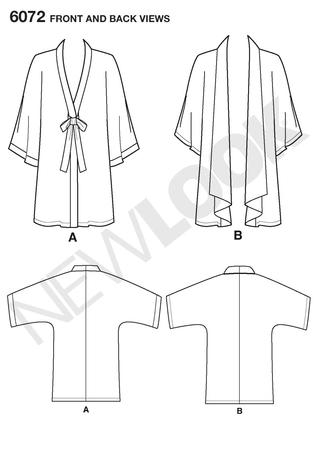 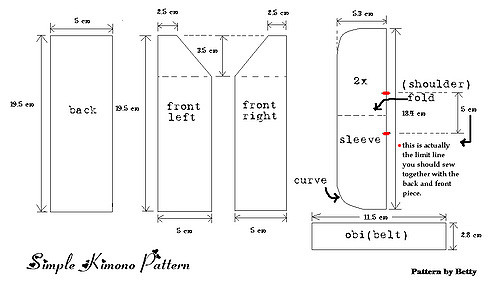 However, at the end of the day, Galina created a different pattern. I wanted it without sleeves first, so there is no sleeve patterns. 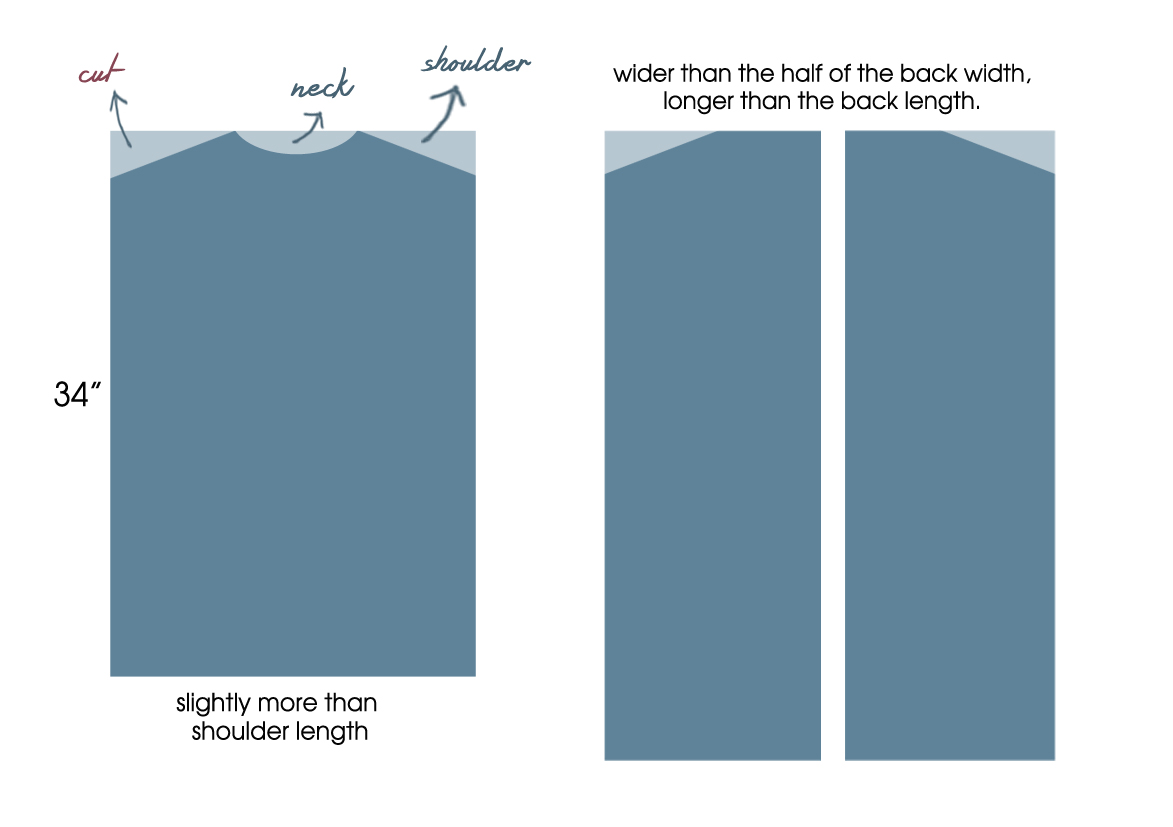 I made a prototype first in order not to waste expensive material. However, the downside is I can’t see the drapping of using such hard material. Still, I prefer to do this prototyping step so that I can keep the already cut pattern for future use (yeay I would be able to make my own clothes! one step at a time). 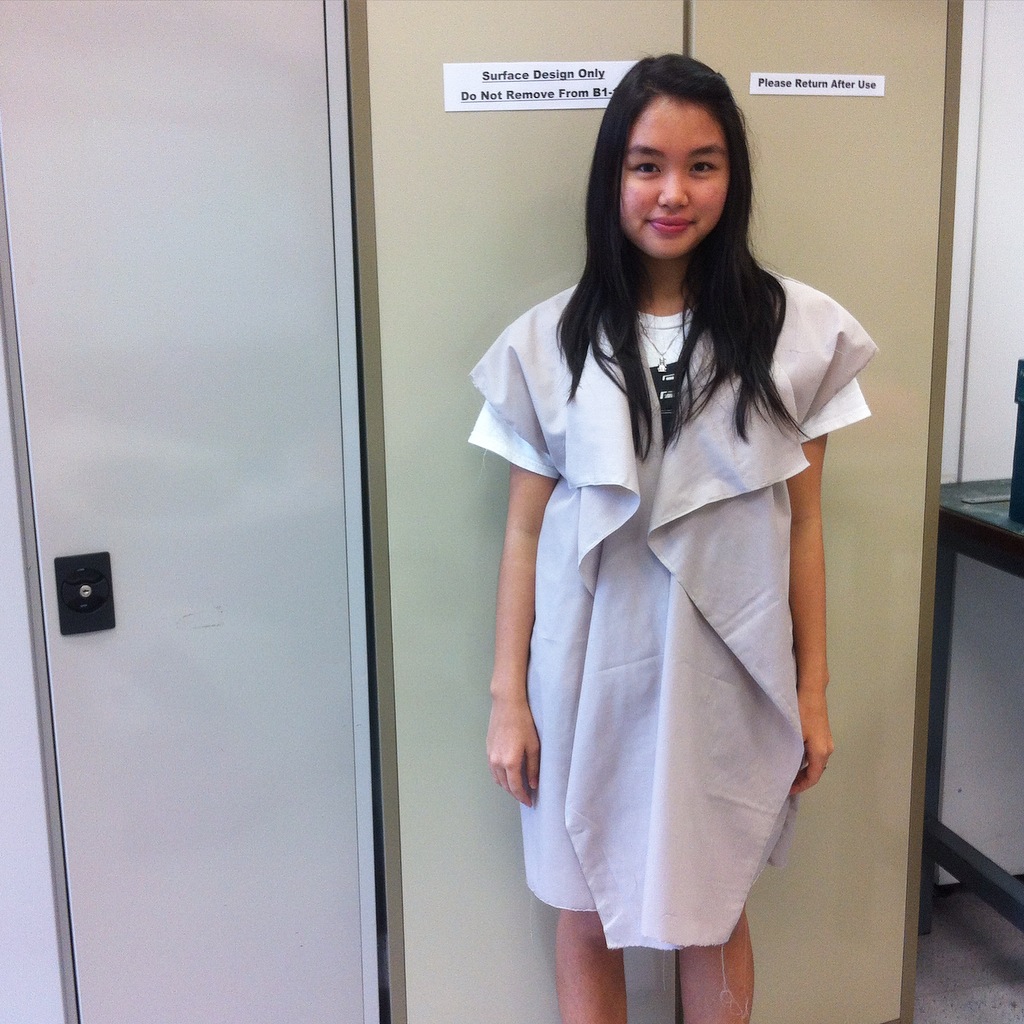 Above was fresh from the sewing machine, and I tried to wear it. Pretty cool, I wouldn’t mind to make another ‘cardigan’ but not for this project. I like big collars tho. 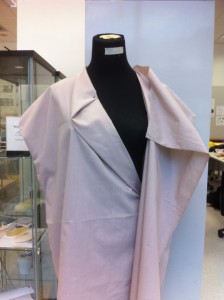 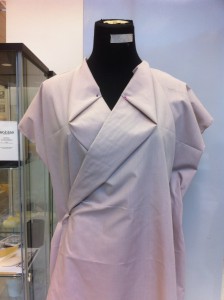 Above is the first drapping on a mannequin. Hmmmmm, no. 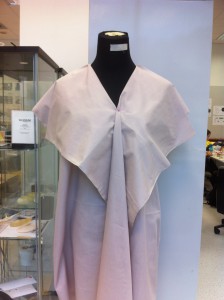 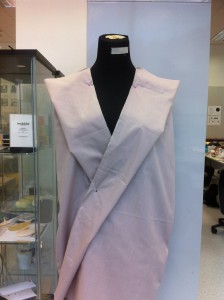 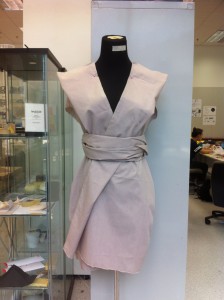 FINALLY OKAY DONE. The next step is to pin them, try wearing it, and draw lines at all the folded part. 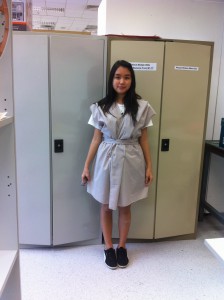 Look fat here, wearing the kimono… i asked my mom why, and she said it’s probably because of the fabric type. Yeah, I need to buy the more flowy and thin fabric to really see the real piece. Rather than on the details and ornaments, I really pay attention to the cutting of an outfit. So, even if a dress is made of thousands of beautiful crystals/diamonds/whatever but it makes me look rounder/shorter/weird/off I wont wear it.

Hmmm, my design is so simple compared to my other friends. There is no need for boiling fabric or anything, it kinda worry me…. But again, the character is a warrior, who didn’t know that she would be a warrior (yeah, inspiration came after my skype-ing session with Angeline), so she might be just a peasant before she fight with the ‘giant’.

However, I think I would need a second layer for my kimono.

I think I will re-design my first design to get better visualization of it.

Overall, this is a very valuable, precious experience :))))))) I’m so happy that finally I make a clothing!!! Didn’t see this coming because NTU has no fashion major :/ 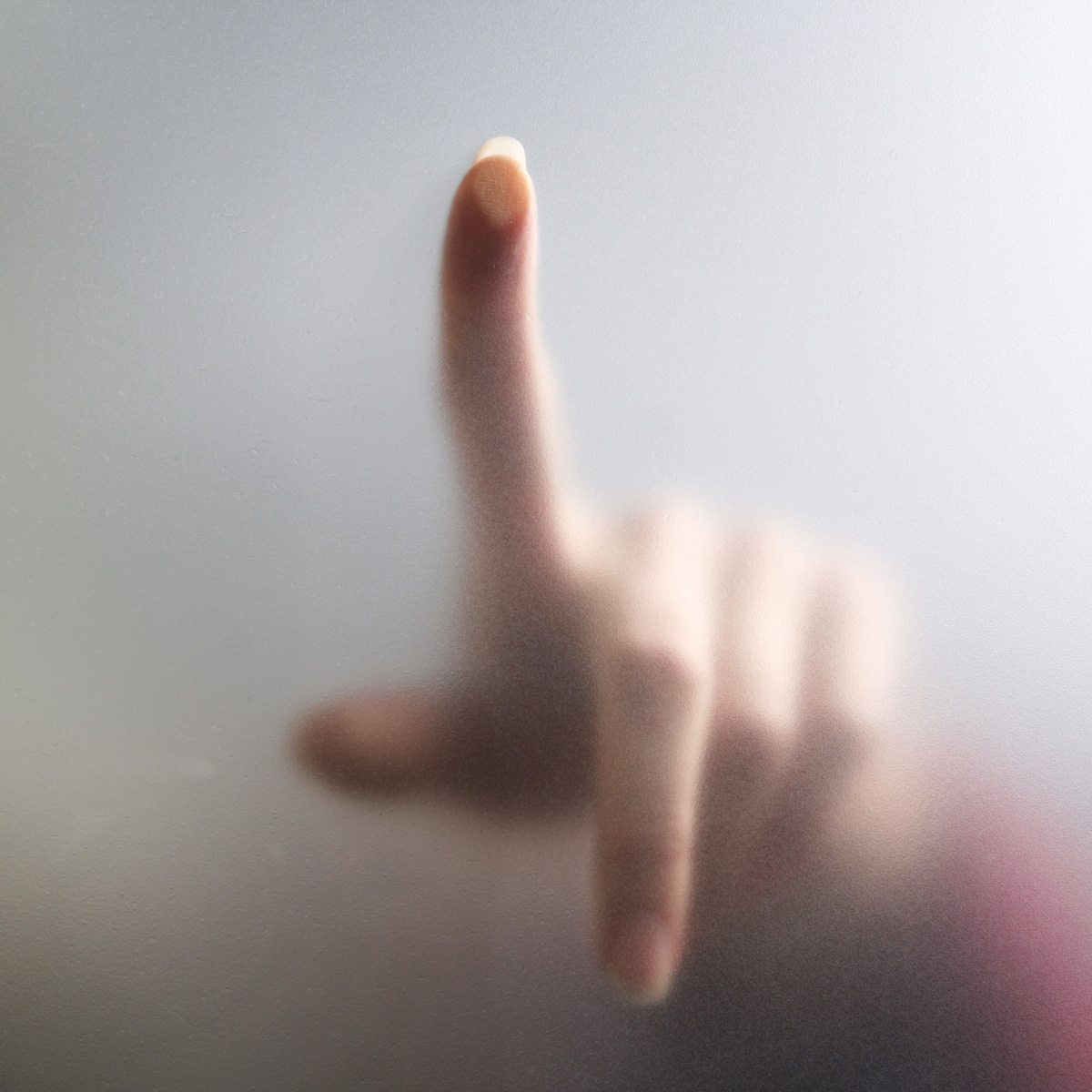 “Virtual embrace in the third space” is a concept in which two or more persons, who are in different spaces and locations, are to be placed together in a virtual, digital space. Their interaction in the digital space seems real. However, without the limitation of physical bodies and space, that interaction can be in the form of something impossible to be done in real life. Hence, “Virtual embrace in the third space” makes what is impossible tangible and seemingly real. However, the virtuality of the interaction should not be taken lightly, because it may evoke feelings in the audience; just like what Susan Kozel said, “seeing is feeling.” And I would like to let the audience see and feel “The Touch of Destruction.” 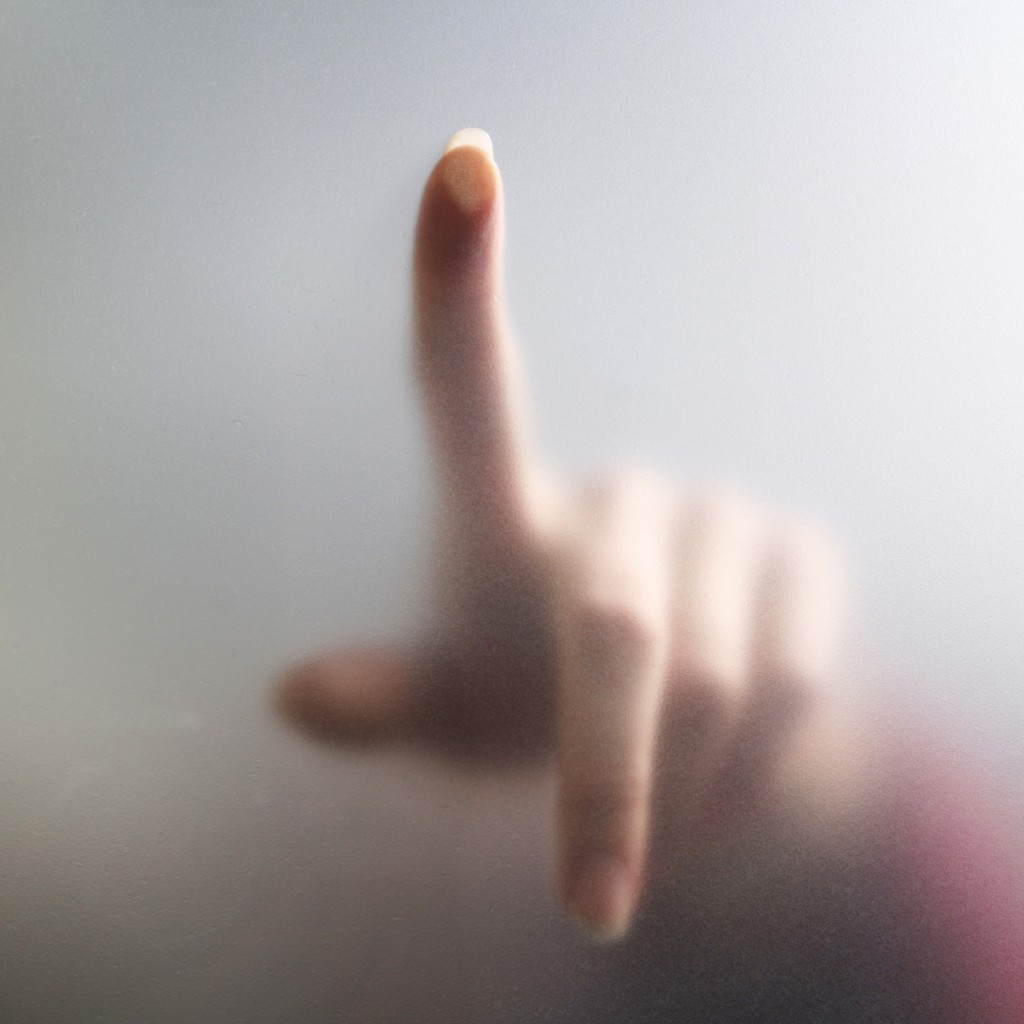 What if a single touch could destroy you? What if, simply two hands could confine and bar you?

In the first part of the performance, I vision one dancer, in grey or ashy blue robe, to be fully on the screen (half or full body) and surrounded by two big hands (much bigger in scale compared to the dancer). Those hands would confine the dancer, not allowing the dancer to free himself from being on the screen, and then they would disturb him. Different fingers ‘touch’ the dancer, and lights on his costume would turn on; the dancer would move in a way that he struggles with his surroundings, and in pain. Then when the two hands are being put together and ‘crush’ the dancer, a glitch on the screen would appear. Dramatic sound effect (e.g. war music) would accompany this part. It ends with the dancer laying on the ground, exhausted.

However, it would not end there.

What if a single touch from the tiniest person, could destroy the giant? What if, you are actually stronger than you think?

For the second part, I imagine it to start with glitches, and a different dancer, dressed in white long dress, would be at the place where the first dancer was laying down. The dancer would fight the big hands which are surrounding them. He would still be crushed, but not getting exhausted. More lights are turned on as he move faster, stretching his body and limbs to different direction. Eventually, the hands will retreat, but one (or more) big face(s) would appear from the centre, going to swallow the white dancer. However, with all his might and endeavour, he is finally able to defeat the evil ‘giant’. The whole second part would be accompanied by victorious war sound effect.

The whole performance would end with the grey and the white dancer to be in the same space, dancing a slow contemporary choreography. The grey would dance at lower level than the white one, and at times they would collide and pass through each other. Towards the very end, both of them will merge as one, face the audience, and glitch will appear. 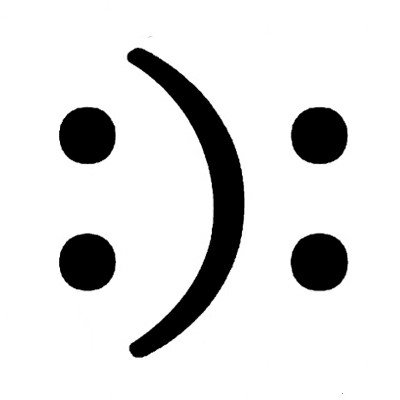 The story behind this idea is about the pessimistic and optimistic sides of human. Sometimes, we let what is not real (worry about the future, negative thoughts) to destroy us and our present. However, sometimes, we have the gut to face what seems to be impossible to conquer, but emerge victorious in the end. The lesson is what is tangible (size of a person, the achievements, the grades, the past experiences, etc.) does not always determine our ability at the moment. Think positively and do not shrink – that is what we should do when we face a bigger enemy or rival. In the end, nothing is impossible, both in real life and virtual space. 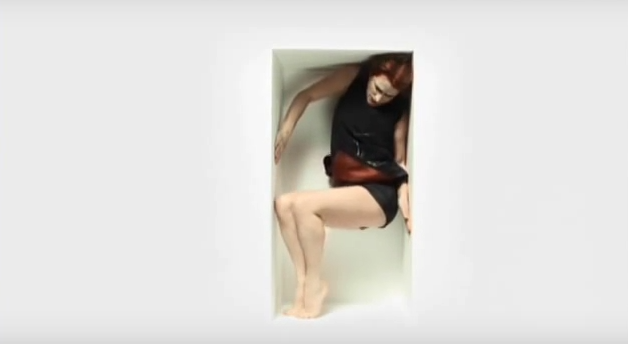