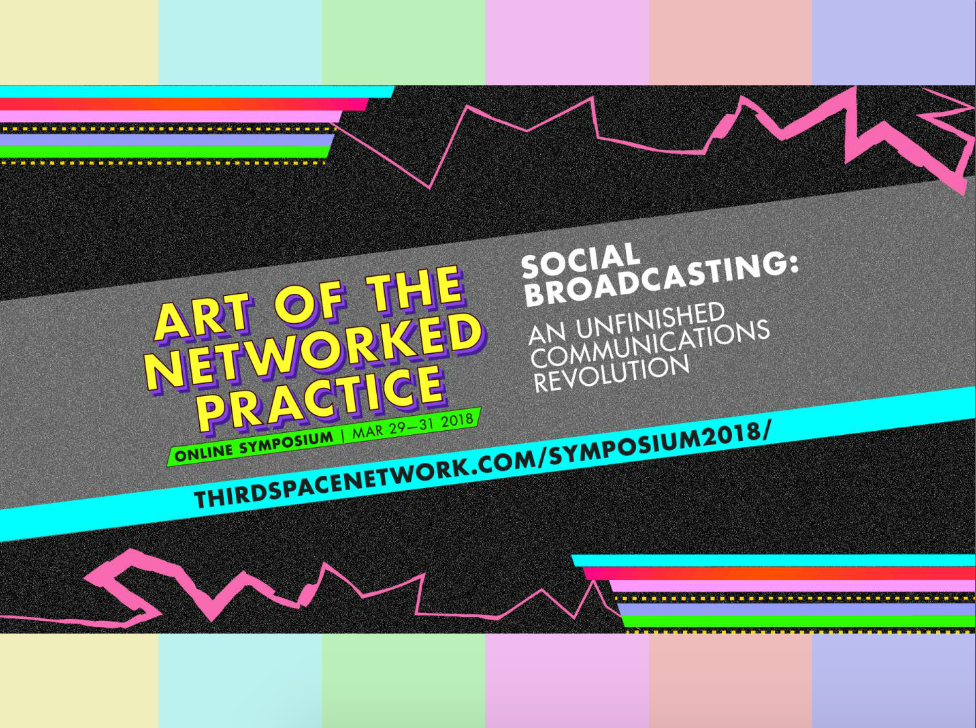 Communication is a vital aspect of current society, especially with the modern advancement of devices, it provides more opportunities for people to converse and communicate via the digital platform. Especially through the use of technologies like computers webcam and program interface. There are several forms of online broadcasting – we have the one to many or many to many dichotomies. These forms of interaction aim to distribute a message or an intention that will reach its specified group of target audience. Some examples of the platform that allows one to many interactions include Twitter and Instagram, whereas many to many interactions may include Reddit forums, blogging websites and online forums. We will touch on that as we progress deeper into the analysis of the online performers.

Creative dialogue enables participants to air differing viewpoints on the go, sparking more discussions along the way. At the same time, participants do not have to withhold their opinions as this could potentially aid in the discovery of new unexplored ideologies through the use of logical critiques. This way, a form of communication is established even without being in close proximity.

Having attended the online symposium held on 29 and 31st March, my discussion will be focused primarily on the interactions observed from these dates. Different performing artists were involved in this conference as they bring together several thought-provoking performances that provoked many questions and debates in the comment section. 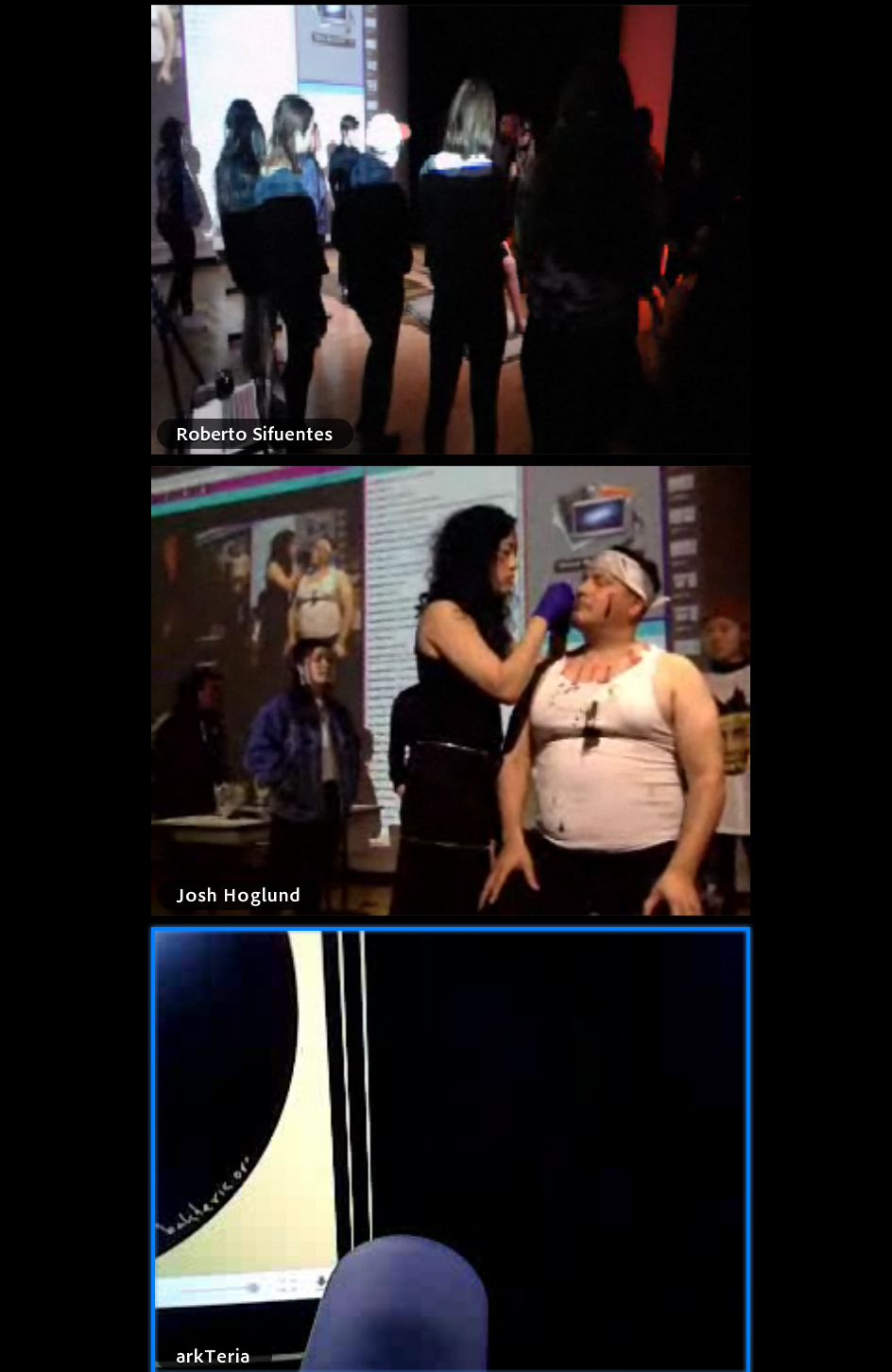 In the performance by Jon Cates, the societal idea of Patriarchy and Femininity were put together into an abstract assemble with the use of symbolic elements and actions as audiences are forced to piece up the notion of radicalization.

For example, the use of blood, woman, background sound and the idea of sexuality. In my opinion, as a remote audience and an observer, the rhetoric of performance on leech stood out to me the most by far. With the use of a storyline focused on religious aspect interweave with gender issues, it sensationalizes the idea of sacrificial on a crucifix – Like a reflection of Jesus and Mother Mary. 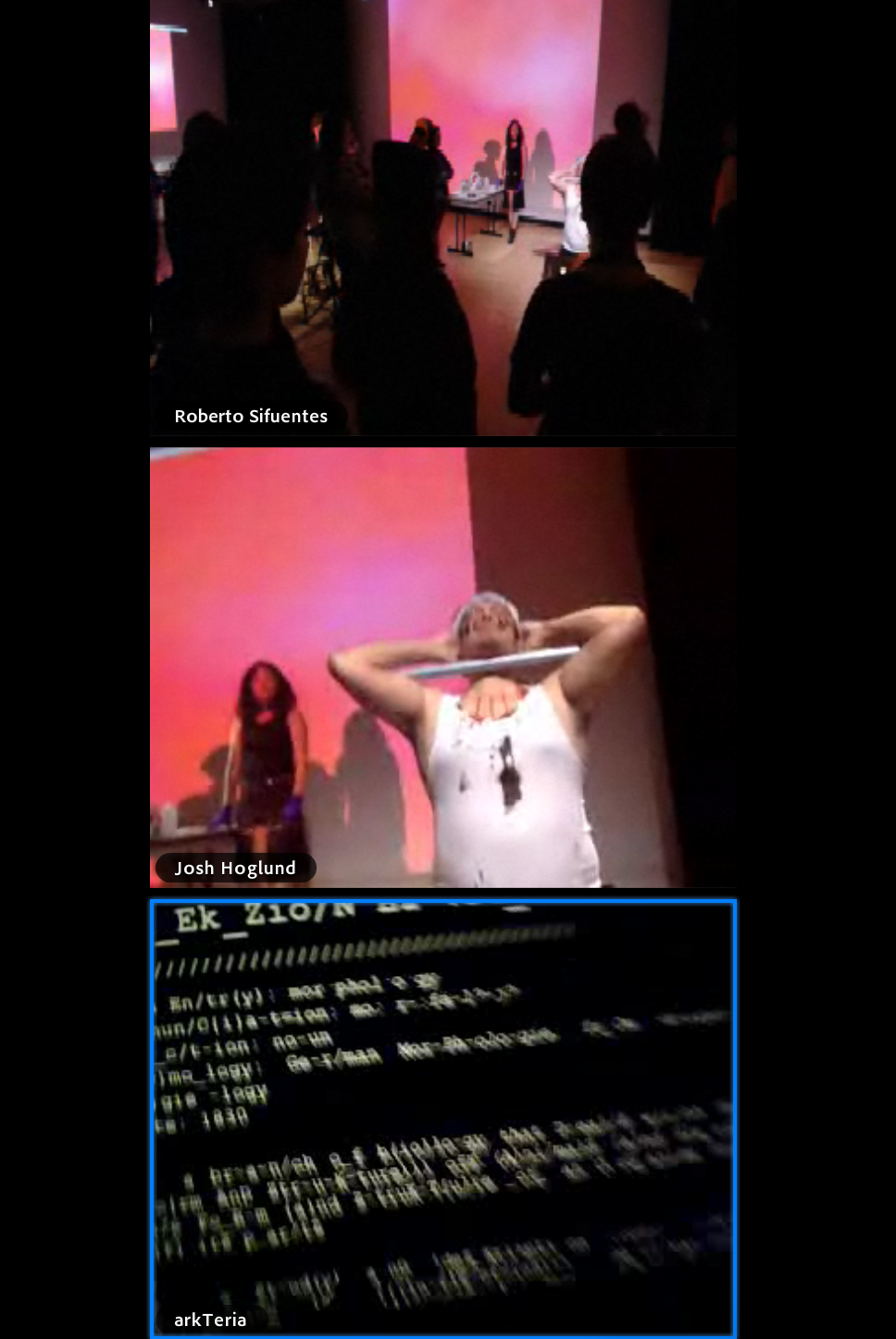 The use of animal, such as the leech brings about the idea of a parasite sucking the blood out of one person, the act of taking advantage. In this case, how does gender play out in this performance? The appearance of the female role seems to me that she is the saviour of the man, who is bleeding and “unconscious” from all the leeching that took place – a caretaker and a healer. Once again, if the gender roles are reversed in this act, the perceived message will then be altered completely.

The notion of leeches, the internet and the online users draws inexplicable connection as they subsist on one another. Also, one additional reference drawn could be: is there a possibility of wordplay when they make use of leeches as part of the performance? Could it altogether be a true reflection of the impact of technology and social media? The conception that we are over-reliant on mechanization as it leeches our time away on mindless scrolling. 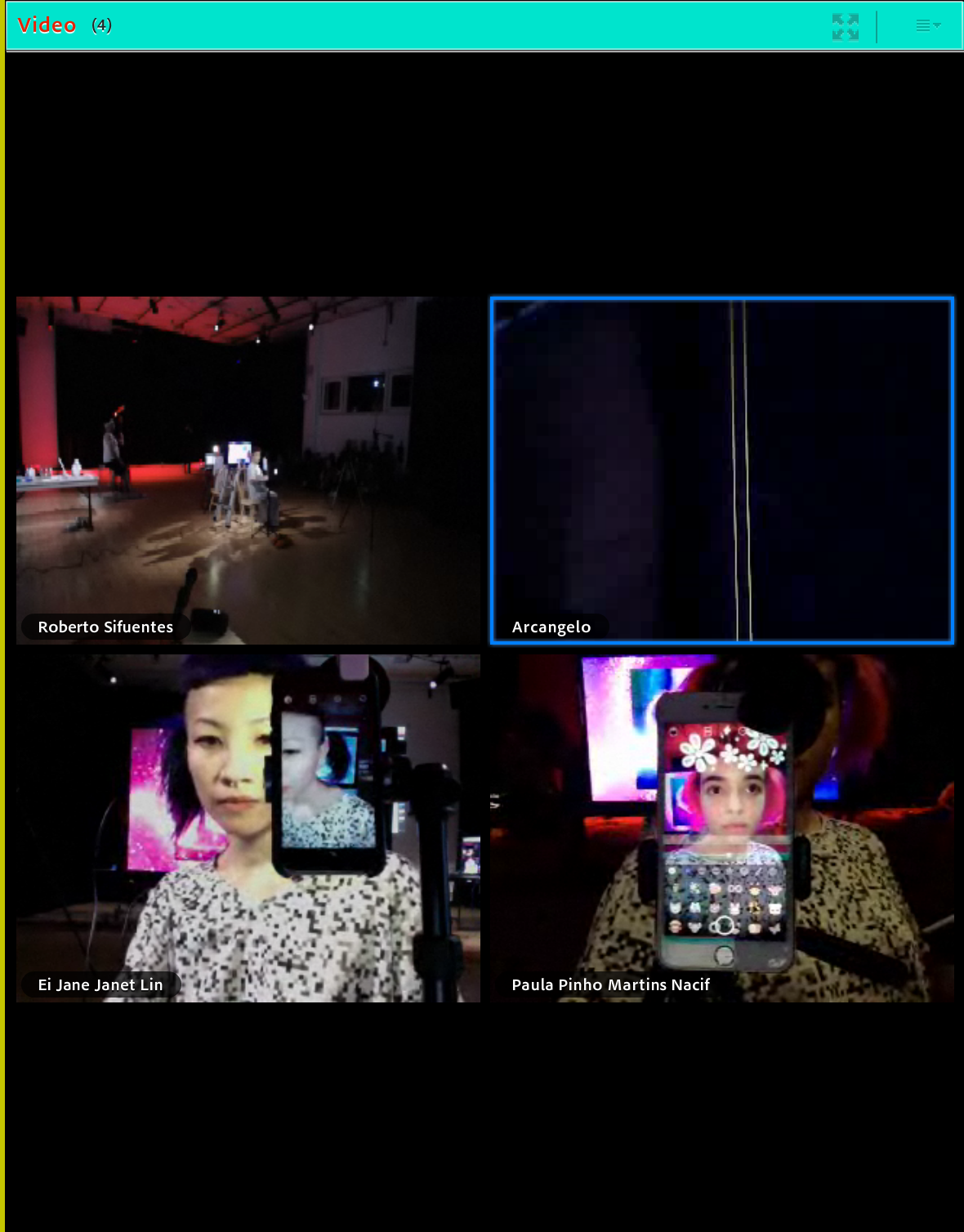 As for the performance by XXXtraprincess, a meaningful discussion was struck post performance as one of the participants questioned the need for sharing/broadcasting across multiple platforms. (As it may seem unnecessary to project across multiple platforms while delivering one same concept. One of the duos explained platforms like Snapchat, Snow application or Instagram live can potentially draw more audience into the discussion. For example, how is a live video different from a recorded footage?

Although both have similar content, yes, however, people who view the recorded footage would have a completely opposing experience altogether. With restrictions that there can be no live interactions and discussions with the performers, viewers can only rationalize the art piece through the comments that were left behind by previous viewers.

A live performance, on the other hand, highlights the ability to blend real-time and virtual space together. In this example, we all gathered on Adobe Connect on this faithful night to stream symposium. The physical space is minimally reduced, bringing participants and the performers closer together in the third space.

Though the remote audiences are viewing symposium via their webcams, the fragmented nature of online broadcasting thoroughly enables the practicability for generating collective awareness. With a mix of audiences from parts of the world, this form of participatory mode in the online space draws a parallel with viewing it in real time, with the privilege of having a live interaction with the performers. 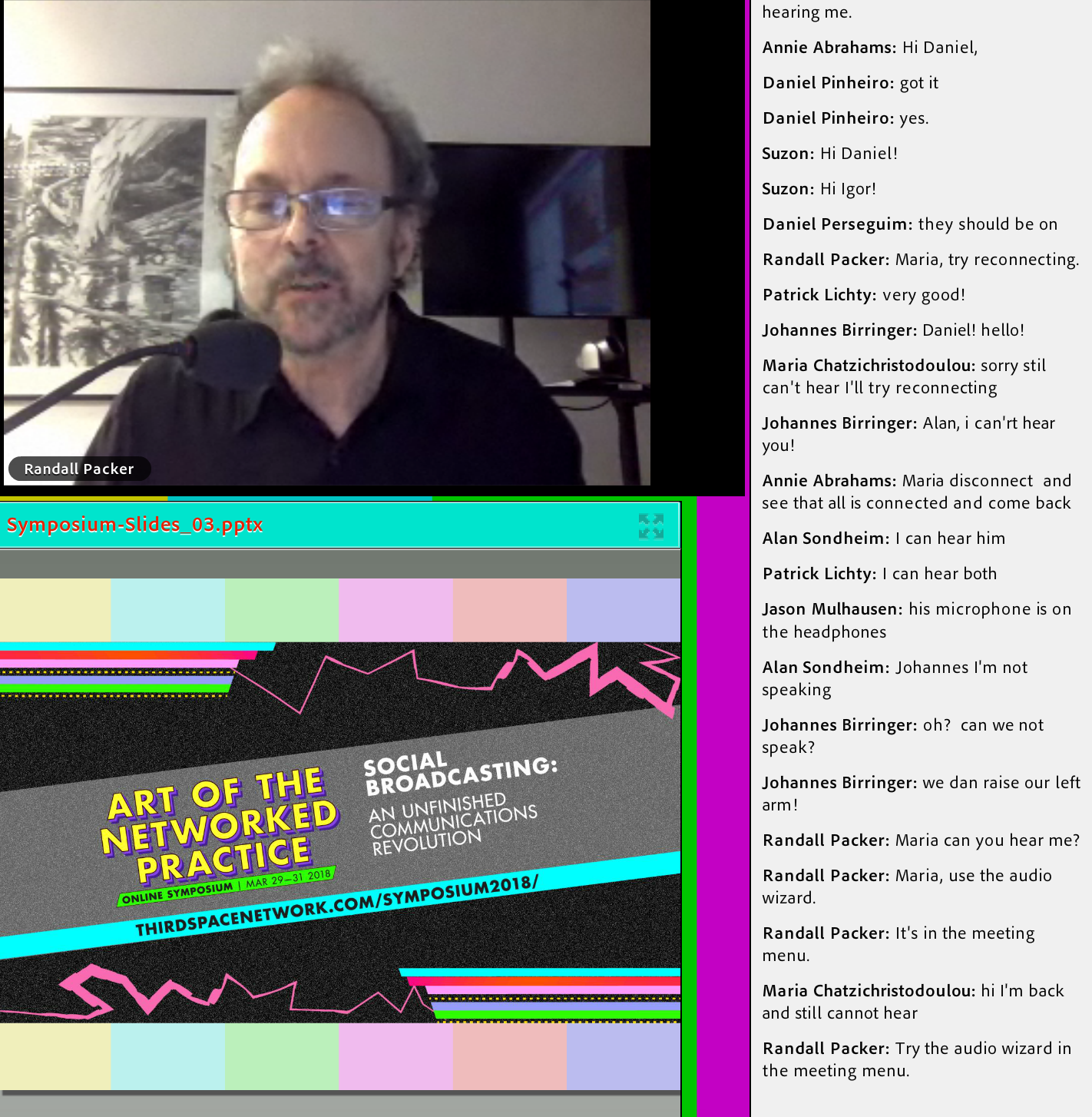 Also, I would like to briefly talk about the sound check procedure as well as the need to troubleshoot for Maria which took place on day 1 of the symposium. It actually took Randall quite awhile to gather everyone and ensure that their sound feedback is of acceptable volume.

All this is communicated through the main coordinator, making sure everyone stays connected and well received. In comparison to meeting in real life, where a piece of information is said and a response will be received immediately, communicating through webcam, or rather, the third space, requires a lot more work in order to have an effective communication. 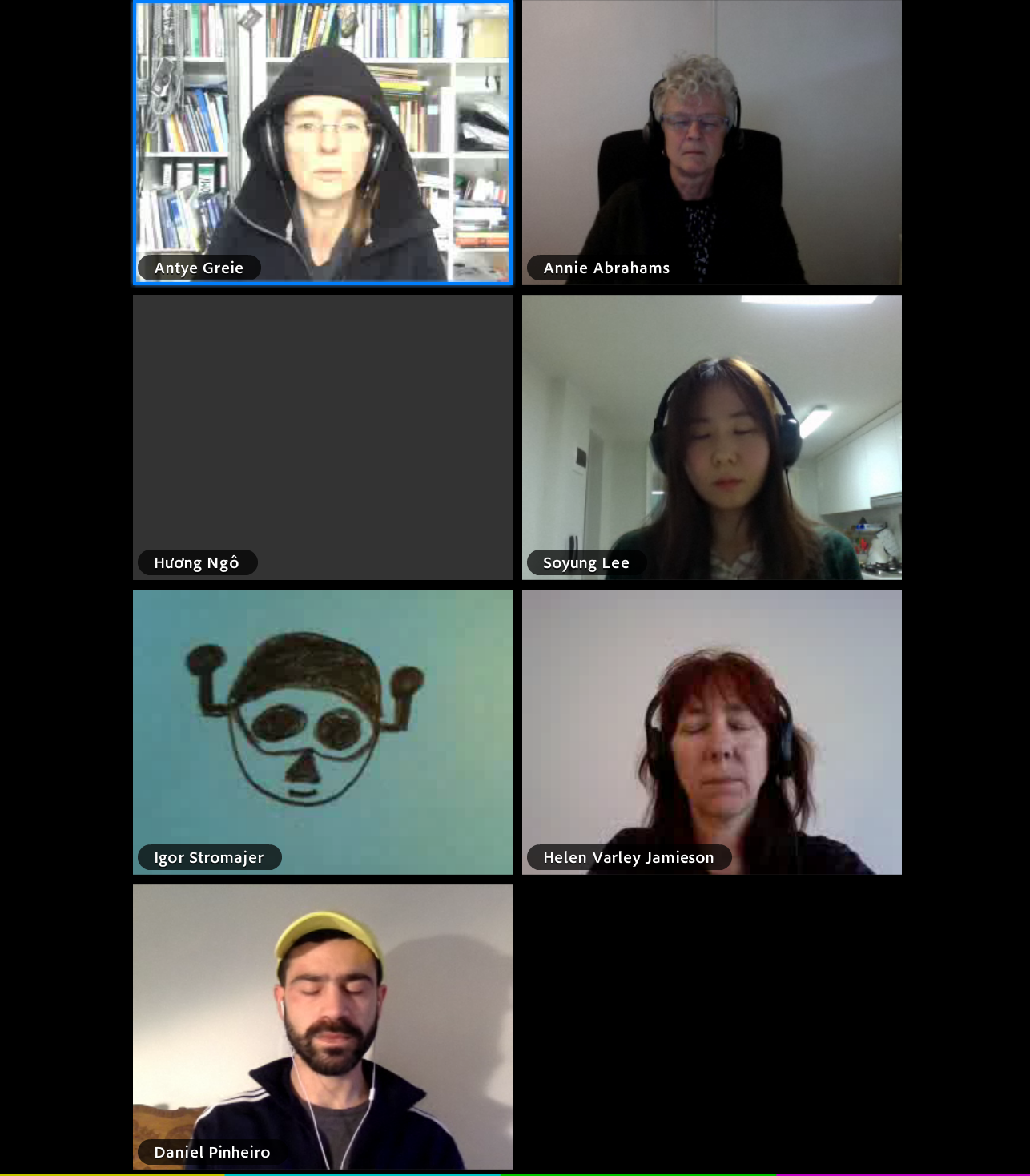 “We have all one subject, in fact, mine is communication and the difficulty to communicate at all.” – Annie Abrahams

The performance conducted by Annie Abrahams (Online En-semble – Entanglement Training) where we have six people reading their latencies, and later we see projections of their ceiling and then their fingers, shows rhythm. The collaborators were of different races and cultural backgrounds, as observed. This ensures that there is a sense of variety and differences as they work together on bringing togetherness in this interconnected world.

Among the 7 webcams, some showed extreme movements, while another absolute stillness. For example, we have Antye Greie’s frame, constantly on still while the remaining 5 frames are vigorously moving. As for the audio, we constantly hear tongue clicking sounds and humming, followed by a wave of harmonica playing in the background. Telecommunication is effective for this performance. What we just witnessed was a seamless, organic form of sound and visual performances brought to us by the artists. 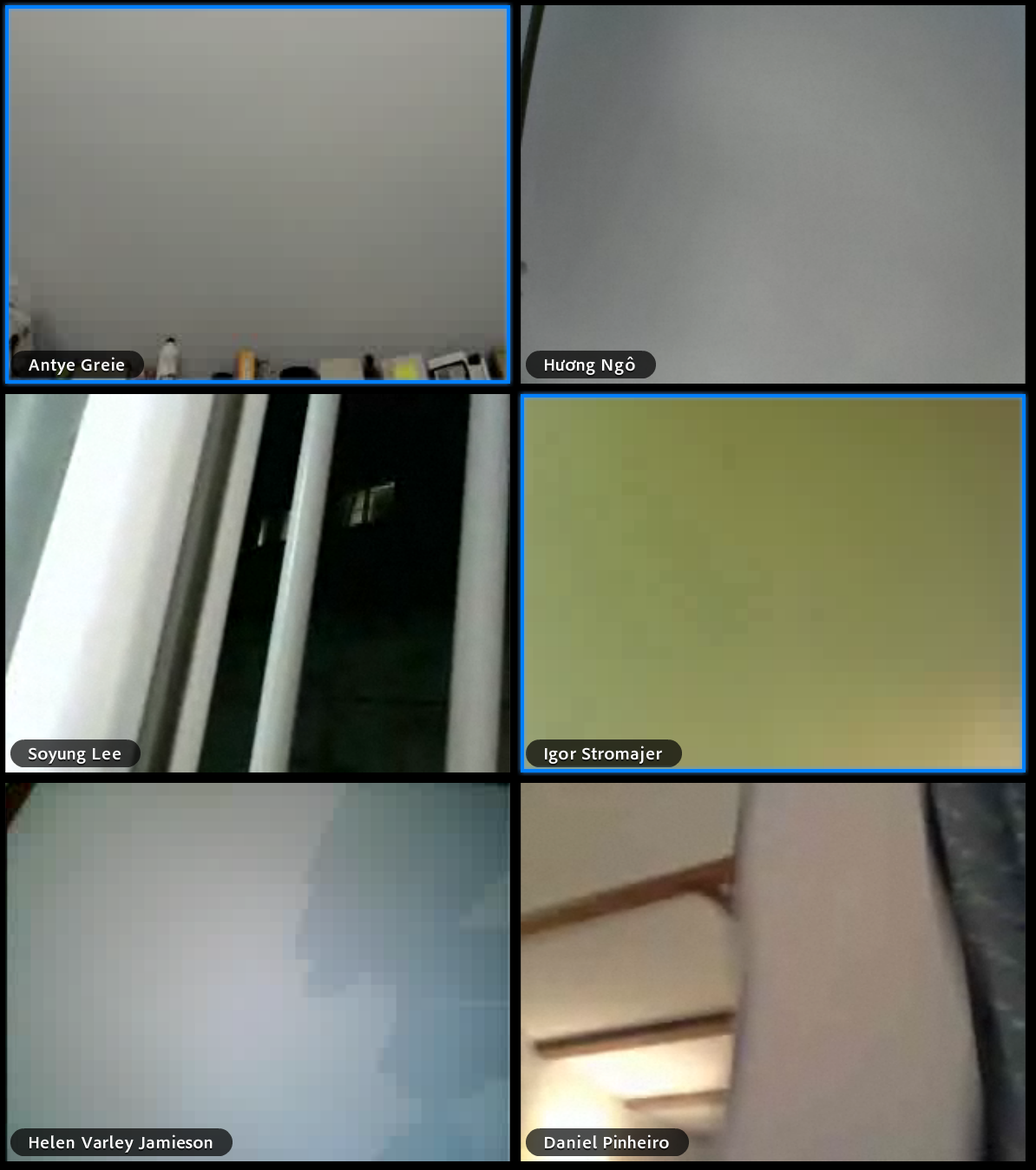 “So instead of dwelling on the frustrations of the network connection, she finds inspiration, and perhaps more importantly, she sets up compelling situations that allow her and others to make critical observations about connection and disconnection.” – Randall Packer

Through the presence of differences in time and space, the outcome was outstanding. The narration weaved in consistently through the use of visuals that was put on screen, communicating harmony and sometimes, distortion. The act was expressive and authentic, even though there was a borderline rule infringed on the performers. The un-staged beautiful mess of chaos and overlaps, all in sync regardless of their location. At the start of the performance, there were 6 black screens. 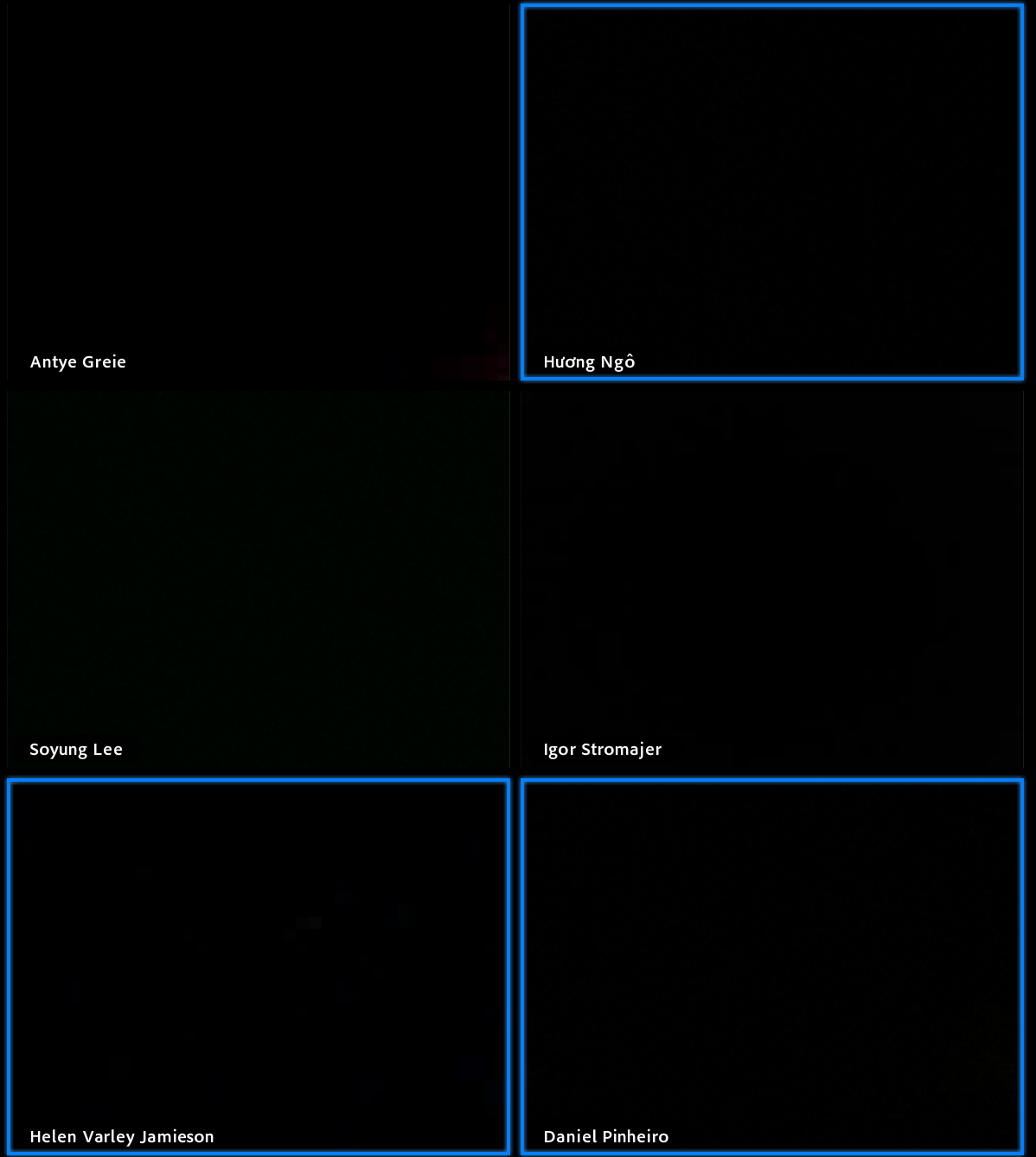 Initially, I thought my internet connection was lagging hence the visuals weren’t displaying right. Turns out, there was some technical difficulty faced by some of the performances, hence all of them offset the problem by having flickers of black screens to normal webcam as part of the enactment. Despite the technical malfunction, Annie’s on the spot thinking compels to the overall success of the online performance as she works around the network difficulties and improvises it as part of her act instead of trying to overcome it was what I find most rewarding in this seminar.

“In this new work we investigate how to be together in a connected world, where machines and humans have to communicate accepting partial overviews, glitches, time-lags, disrupting audience participation and ensuing disorientations. Abrahams considers the intra-active webcam performance situation a good apparatus to train and demonstrate entanglement.” – source: https://aabrahams.wordpress.com/ 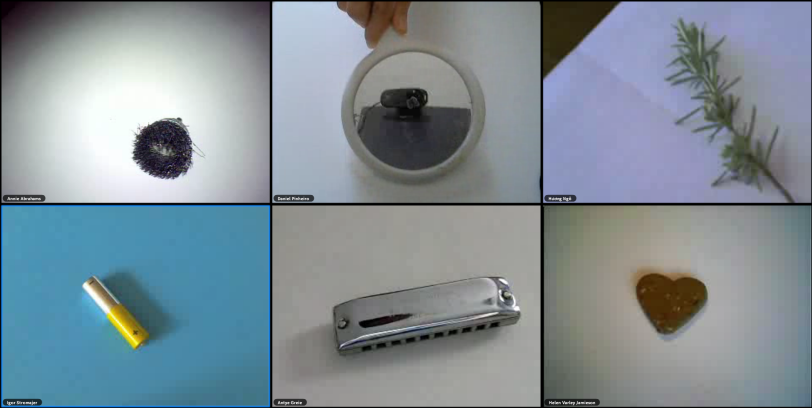 Annie specifically wrote scripts for each of the collaborators, ensuring that there is no repetition of movements and items throughout the performance. Through the performance, the main idea is to navigate away from the familiarity of their individual culture and beliefs, with the use of a conversational performance. Also, notice how it was an intentional choice that no faces were shown throughout the course of the performance? In the initial phase, I was a tad bit confused as to why the collaborators communicated through objects since the items looked pretty random.

According to research, it was a part of Annie’s goal as faces would be a form of distraction – This is why objects are used and selected phases and noises were made to transmit the message. I would say the idea was abstractly brilliant as to how people who were situated in different parts of the world could come together and attempt to stretch beyond their communication limits to perform a harmonious and seamless performance while being apart. This is absolutely mindblowing.

1 thought on “Art of the Networked Practice”