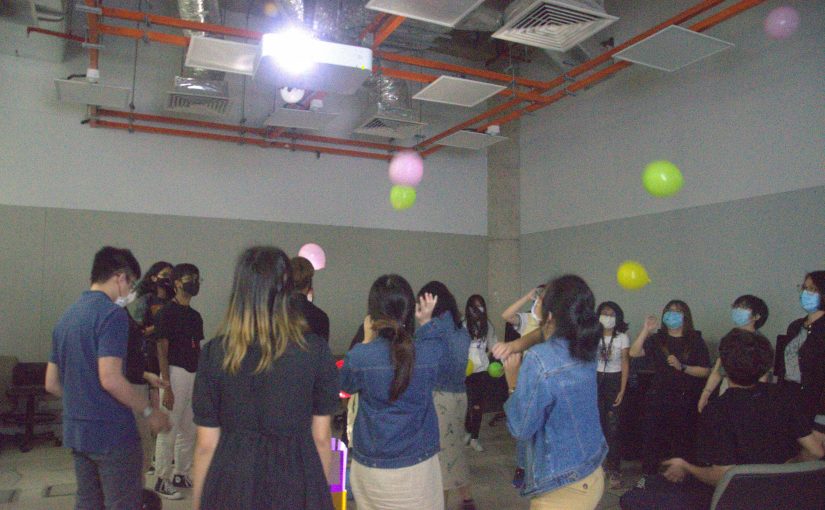 We communicate every day and talk about many things. We share secrets, talk cock and sometimes we banter. But how many conversations do we remember? Which ones are significant to you? Why do we remember them? What makes them special?

Conversations may make us happy. They may be frustrating. There are times when we may be excluded from conversations. What would our conversations look like if we could see them? Want to find out? Let’s talk.

The idea of using balloons to stimulate conversations came from Chelsea. She envisioned the throwing of balloons and the hectic atmosphere as a key part of it so we began to build around that. During our discussions, we talked about what the colours, size and shape of the balloons should be and if they meant anything. What would the audience’s participation represent or mean, what is the takeaway here? We also discussed the setting in which we wanted it.

The passing of balloons represent the passing of information or the different conversation topics. We will be passing one balloon between 3 of us and depict communication breakdown etc. and gradually add more balloons/topics into the conversation.

Eventually we have too many to handle so we pass it around the class as well. They can pass back to us or pass to someone else.

Once all balloons are passing around the class and it gets hectic, representing an overload of information, we will take the medium and small sized balloons and throw them to the side. There will be 3 big balloons that we will be left with us in the end to represent meaningful conversations sticking with us while the small-talks are forgotten.

During our discussions, we came up with every minute of what we were going to do and practiced it. We wanted to use audio to aid us through the timings, which in my opinion was really important because we had 15 minutes. How do we keep things interesting for 15 minutes?

We tried to plan out for the audience’s reaction like if they don’t listen to the audio cues, what then? If they don’t give us the big balloons, what then? But we underestimated the chaos that would ensue.

On the actual day, it started out fine. We were doing our thing, the three of us followed the audio cues pretty well, I would say. But one Joreen “burst”, everyone became 5 year olds, which worried me. Because you can’t keep a 5 year old interested in one thing for more than 5 minutes. Let alone 15 minutes.

When the five minute mark hit, and the first communal Ding came on (meaning the first balloon gets added into the crowd), the basket holding all the balloons were empty. And everyone started hitting the balloons all over the place. My brain began to worry. It was only supposed to get hectic like 13 minutes in. What were we supposed to do for the next 8 minutes?!?!?!? And it wasn’t like we could start talking to each other in the middle of it all. I tried to stimulate the slowing down and quickening by deliberately hitting people in the face when it got quicker and withholding balloons when it got slower, like in the beginning. But amidst the chaos, it was impossible to have made any impact. The next 8 minutes were a blur, literally couldn’t see anything except dashes of colour. Everyone’s faces started looking tired and bored after a while and I felt defeated. My teammates were probably feeling the same thing.

We should have made it clearer with each other EXACTLY what we would do when chaos ensued. We were the facilitators of it and should have been able to set the limitations of the performance better to better get the point across, and at the same time, better stimulate the interactions. We should not have drowned.

I guess if we were to tie it back to the main theme of our concept: the three of us, the hosts of the group chat or rather the admins, having our own little conversations. Maybe the group chat was a tamed group. Those where people would text once in a while but you don’t really think about it throughout the week. Then we would think “Won’t this group chat be more fun with more people?” Then we opened it up and made the chat public. We publicised it by sharing the chat link with people (the handing out of balloons) and formed more admins. Then we started talking to even more people but we wouldn’t expect these people to talk SO MUCH with each other. We lose control of the conversations. The audio cues would represent what a normal group chat would look like, but this group chat isn’t normal. It’s full of eccentric people who are meeting each other for the first time and are having so much conversations, big or small. Some people are opening up quickly while others only text in stickers or in “haha”s. After a while, we lose stamina. The craziness in the group chat lasts for a few hours but after a while we die down. A few new people still talk a lot but it’s starts to feel forced. And slowly, everything stops. We forget about whatever we talked about in the hectic period of conversation but what we do hold onto is the impression we have of the people who spoke through what they said. Fun fact (and you can fact check me on this): This is exactly how the Reddit ADM2020Y1 Telegram group went down.

So yes, I think that even though the execution wasn’t as we expected, it still was able to show what we wanted it to, about stimulating conversation.