Maps show a process to getting somewhere, and the process takes up most of the map rather than the actual destination. I would describe my experimental map as the abstract/foreword to a storybook, the header, and footer to every page that instantly reminds me of my destination, and the page number of every page which tells me whether I am nearer or farther from the ending. Visual cues such as advertisements or signboards displayed on digital billboards or hung and pasted on walls, etc can ascend in its intensity as I move closer and closer to the intended, whlist at the same time, giving me the strong sense that I am in the right place. 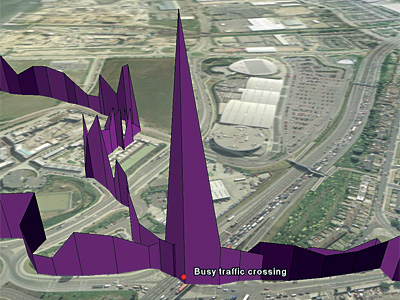 The purpose of the navigation process decides what ways to use to develop an experimental map of a given location, and that is subjective to individuals as to what they want to see/hear/feel. It is a personal experience, and perhaps if there is a common unit which expresses a collection of feelings, such as through bio-mapping, which visualizes people’s reactions to the external world. (http://www.biomapping.net)

Annette Kim’s Chapter 1: Seen and Unseen, Ho Chi Minh’s Sidewalk Life provided detailed explanation with which backed up the author’s observations. By cross-referencing and questioning the American ideas behind street planning with the context of the Asian, the differences that surfaced appeared to be stemming from the simplest relationships between social groups, between the multiple groups of people using the space and the decision makers who decide what to do with the space. In my opinion, is intriguing that the power lies with those who strongly define the characteristics of the public space, for example, HCMC’s street vendors, who depended on their street vendor lifestyle as a source of livelihood, and that their appearance is a hallmark of the Vietnamese culture. It reaffirms that urban planning for is a social construct.

In my opinion, is intriguing that the power lies with those who strongly define the characteristics of the public space, for example, HCMC’s street vendors, who depended on their street vendor lifestyle as a source of livelihood, and their street vendor practice is a hallmark of the Vietnamese culture. The author stated that urban planning is a social construct (and a physical construct). Question 1: If people of HCMC are relocated to a fresh space, is it likely that the fresh space will remain similar to the current status quo?(Can we say that the social construct to urban space allocation is as strong as the relationship between human behavior and the DNA?)

It is difficult for a person alone to understand all the perspectives when it comes to urban land planning, but to let the ecosystem speaks for itself. I found Tom Hulme’s speech (I have posted a link below), on how we can build a product that people, inspiring. Based on my understanding of the article, I felt that Hulme’s example of a particular university that built no pathways and paved the bared land trekked out by the users of the school compound demonstrated empathy to its inhabitants. Although the context is vastly different, what was insightful was the approach to let people interact with space themselves and observe to find out what works best.