Contrast (all 3 need to be showcased in a structure)

Main Forms (all 3 need to be showcased in a structure)

“I think it’s really important to design things with a kind of personality.” — Marc Newson

Sketch as many variations of rectilinear volumes that fall into
each of the following categories.

Make 20 rectilinear volumes in blue foam in a wide variety of proportions,
shapes and sizes.
The edges should be clean.
90 degrees and all planes of the volumes should be perpendicular to one
another.

Design & sketch 3 three-dimensional rectilinear compositions in your
sketchbook or paper.
*Indicate the axes in all the volumes.

Rules of the compositions: 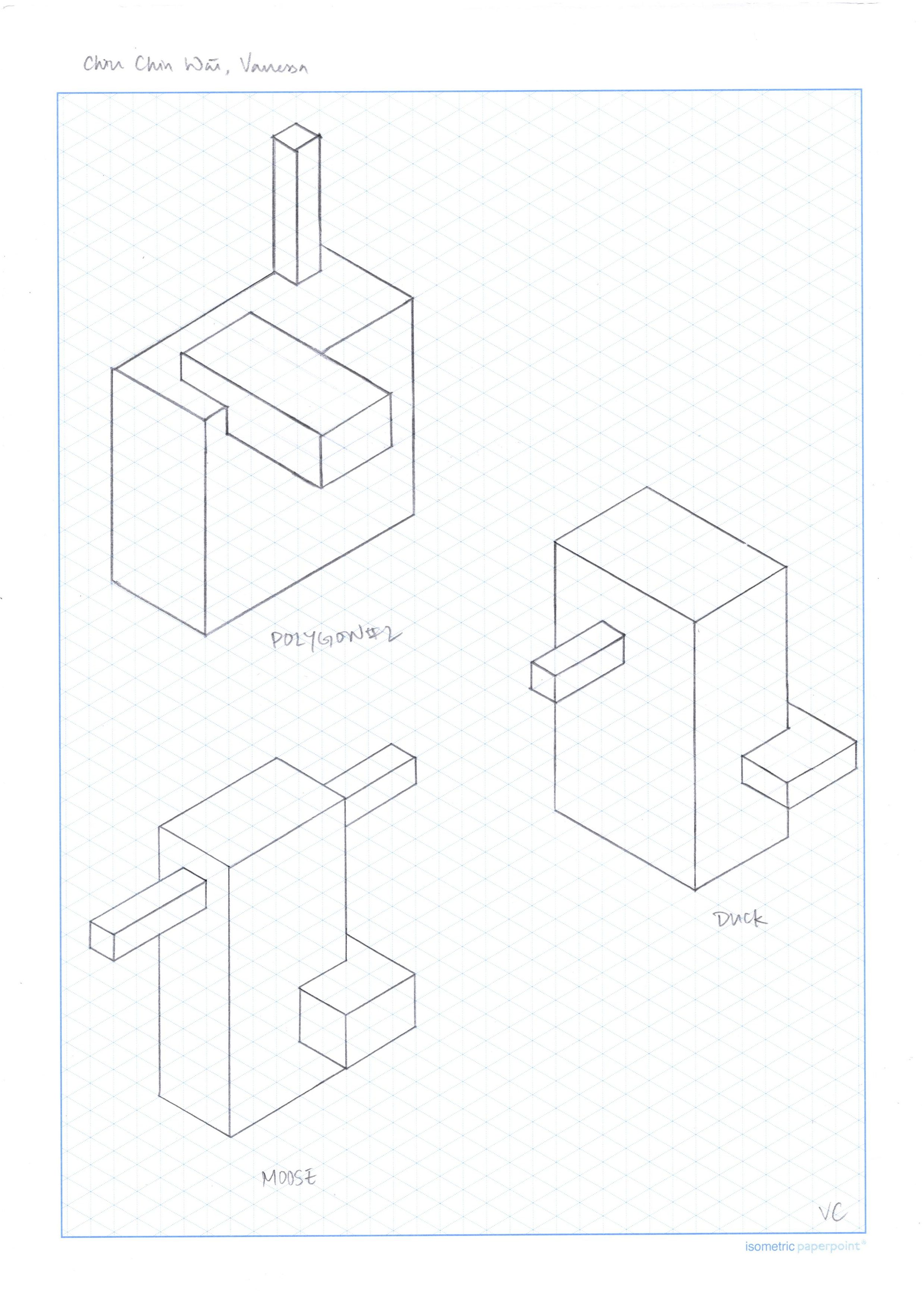 Keeping in mind that each rectilinear volume had to have a recognisable dominant, sub-dominant and subordinate piece, I tried my best to ensure a proportional visual balance in the composition.

It was not mandatory to include all three, massive, planar and extensional pieces in the composition, but I did my best to work them in to make the volume more dimensionally interesting.

There were a few crop ups in the previous drafts as some compositions’ volumes were comparatively disproportionate to each other, but after scaling and some rearrangements, they became more theoretically proportionate. 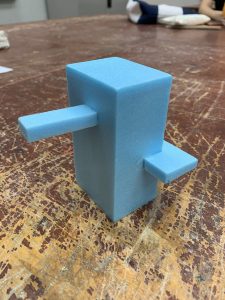 “Duck”
During the group feedback session, Osh pulled out “Duck” with a few other rectilinear volumes and asked us what was characteristic of the group formed. The volumes identified were symmetrical in nature and not desirable for this rectilinear volume project. Furthermore, with the sub-dominant/extensional piece so protruding from the heavy piece like a butt joint, it was a piece that flouted many guidelines of creation. 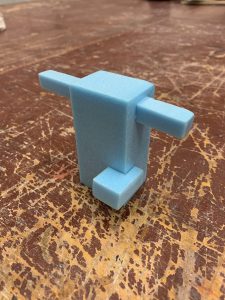 “Moose”
This rectilinear volume was the one that had the least problems as dominant, sub-dominant and subordinate was very clearly visible. The only concern was that the extensional piece at the top was too centred on the heavy piece. This prototype was further developed later on to form my final work after flipping it to lie horizontally and propped by the subdominant and the subordinate piece. 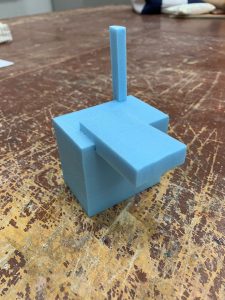 “Polygon #2”
This rectilinear volume did not have too big of an issue with the composition but Osh felt that the subdominant and the subordinate could have bigger contrast which I agreed with. Despite the evidently larger volume, the subdominant/planar piece did not come across clearly as the subordinate/extensional piece due to its striking height.

My final work, Equipoise, can be found on the post titled “[DN1003] Project #1 – Rectilinear Volumes (Final)”. 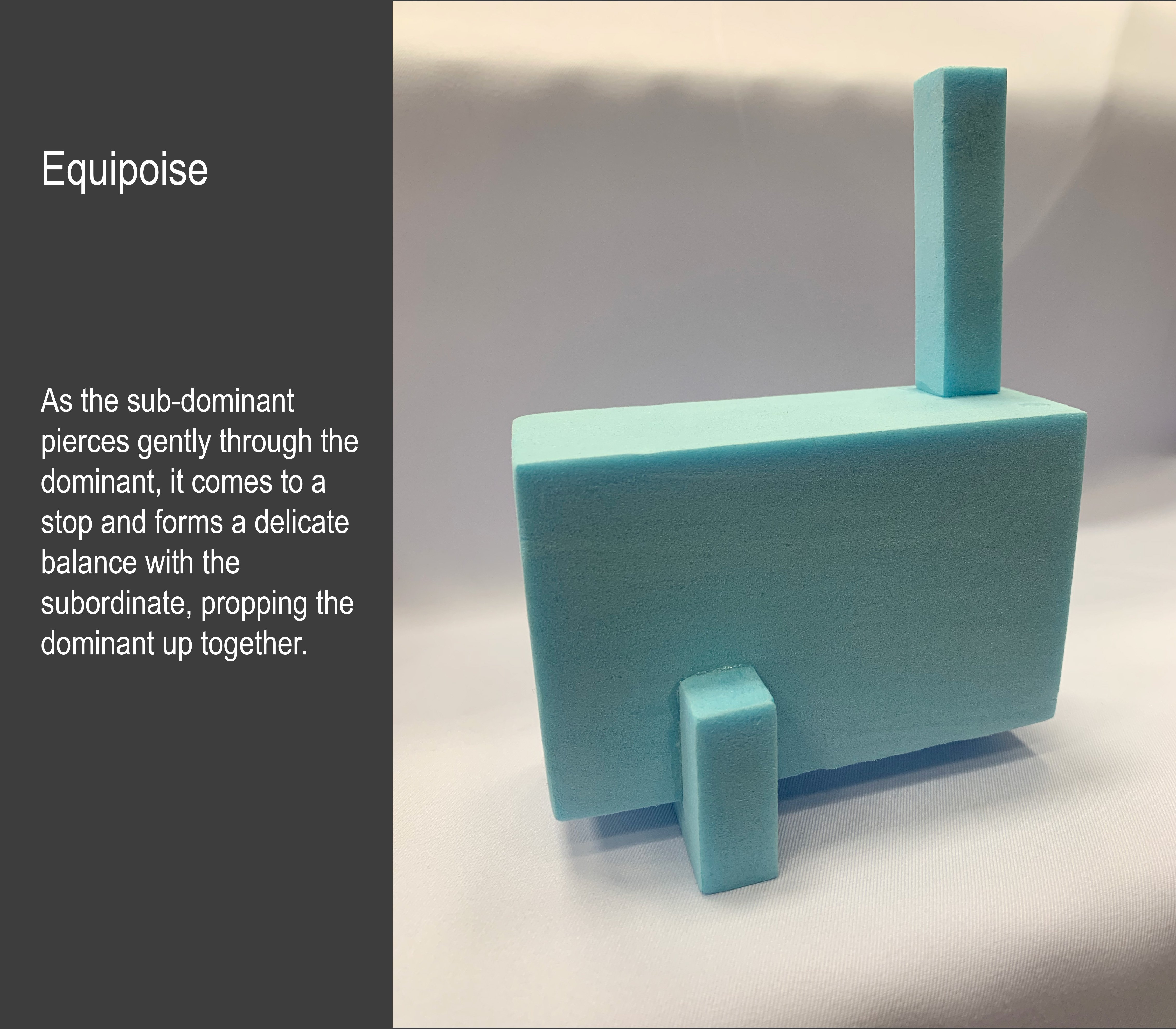 What is a Plane??
– An element that has surface direction unaccompanied by mass
– Is a path of a moving line
– Has width and length
– Has a shape / surface
– Has a specific orientation / position
– Expresses direction and movement
– Expresses different axial quality
– Can be 2D or 3D

A plane has ‘no depth’ unlike volume. In a 3D space, it can be horizontal, vertical or even bent. They have axises and express direction & movement + axial properties.

** The axis follow the longest line through the shape 🙂

What makes a Good Structure? 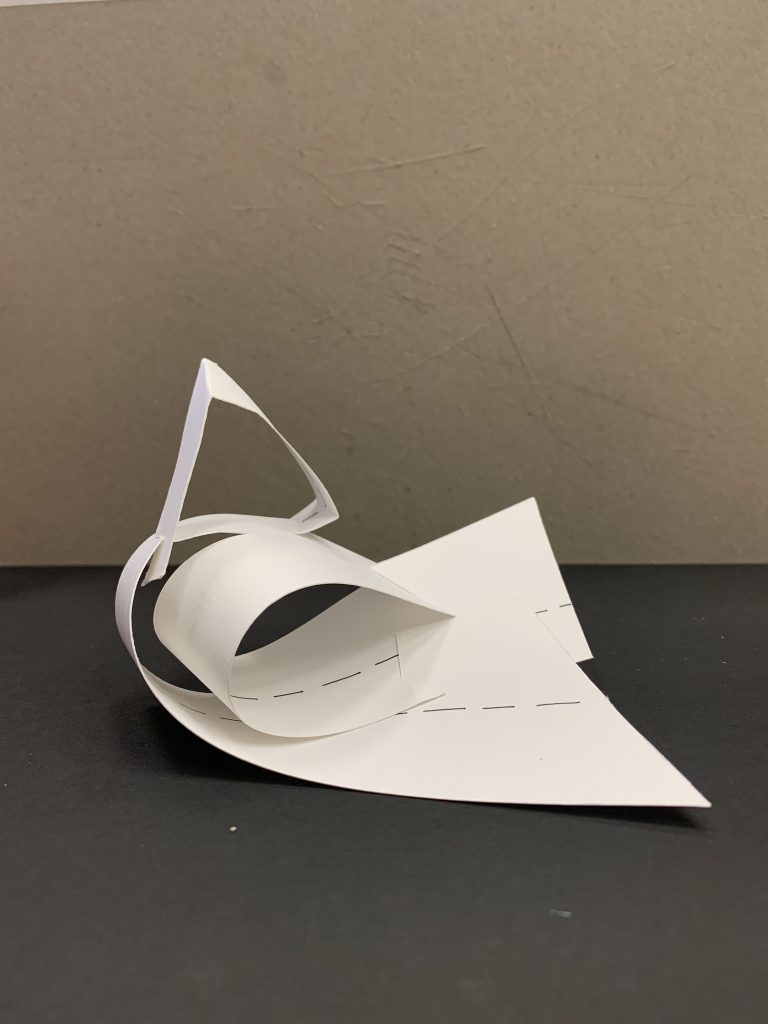 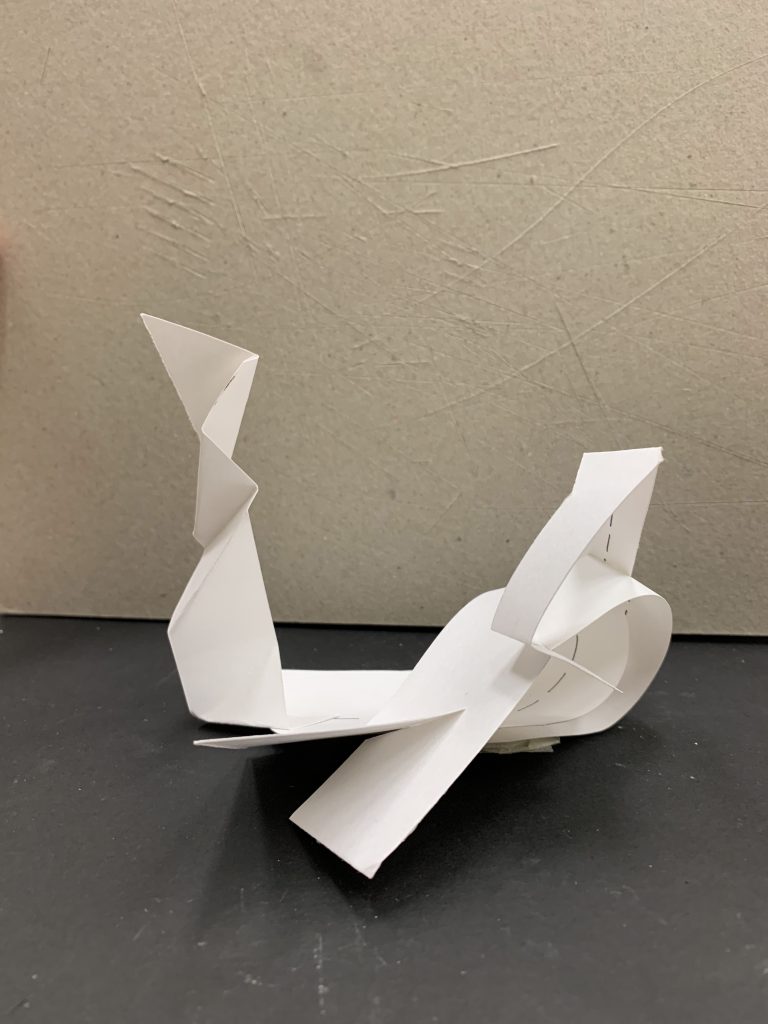 This is the first model I created for the preliminary round of construction and I throughly loved how the complex axis of the dominant piece twisted and wedged on each other. However, as I continued to build on around and on the dominant piece, it started to look rather flat as everything was placed in the same strip of the mounting board.

With the axis of each plane drawn for the preliminary round of construction, it was visible and relatively straightforward to make a fairly dynamic model. However, with the longer I worked on one face of the model, I realised that I had neglected the other faces and it was starting to look rather flat and blocked from other angles.

The pleats and the planes were also very neatly edged onto each other, but it was done at a wrong angle, resulting in a very ‘closed up’ looking model. The planar construction also looked rather heavy and one-dimensional because I didn’t play much with height and breadth. I remade this model with a new cut of planes that were supposedly more dimensional than the previous few but they didn’t work out as expected. The dominant broken plane turned out way smaller than the subdominant when comparatively measured. The subordinate plane was also wedged insecurely due to the inaccurate placements of the slits, resulting in its displacement on the journey home.

For this round’s review, Osh also mentioned that the composition was not a good one due to the twisting of the dominant plane. The two ribbon-like tails of the broken plane were too closely wedged onto each other that it lacked dimension from all sides of the composition. I attempted to prop it up in a more drastic manner and make a bigger dominant piece but it did not work out as expected so this idea was not developed further. 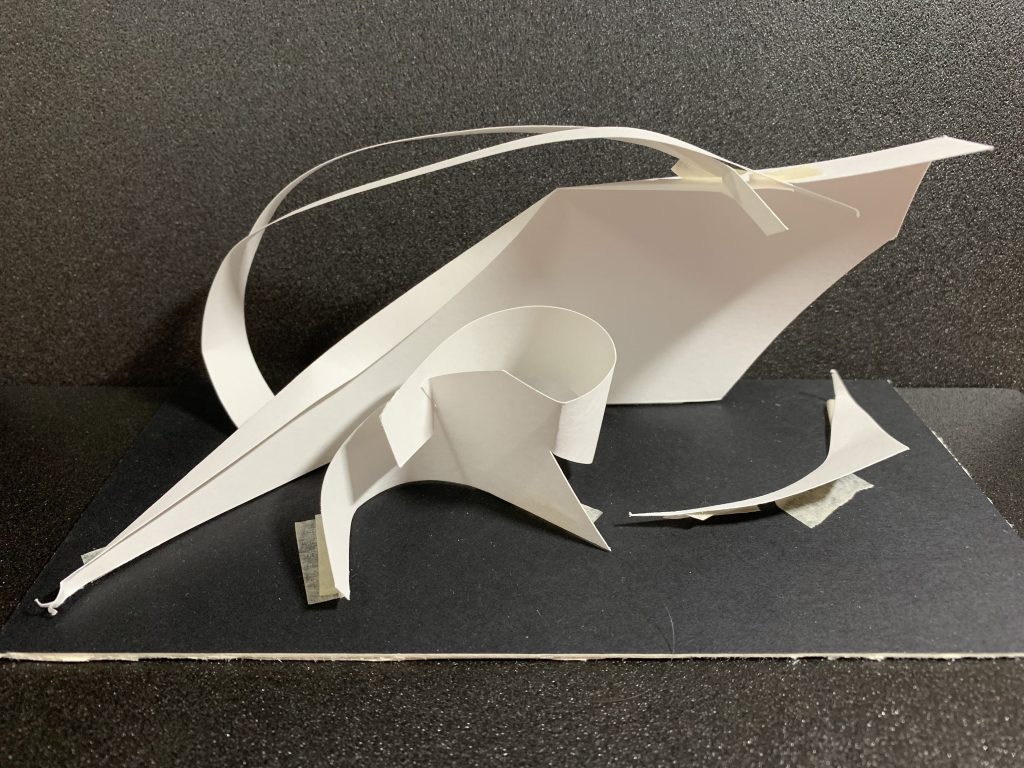 During the feedback session, Osh mentioned that this planar construction had pieces that were very nicely done, like the curved fold on the dominant piece, as well as the subordinate broken plane that guided the movement of the construction. Osh also mentioned that the subordinate piece was a nice addition, although it could’ve been a little bit smaller. The other subdominant piece however, was not a good addition to the model as it was a closed up piece of its own due to the broken piece wedging onto the main piece, forming a looped shape.

One other matter brought up was that the dominant piece was a very heavy and expansive piece that blocked out the whole construction when viewed from the back. There were very nice elements from this construction, but the main concern was the lack of a dynamism. This idea was not further developed after an attempt to upscale the planes to A4 fitting proportions, as it appeared lopsided with a lack of stability when untouched.

During the consultation, Osh mentioned that the dominant plane would be better transfigured to have an arch or a smaller breadth as it was blocking out the majority of the model when viewed from the side. The angular planes were working well together, however, the curved plane forming a mirrored ‘C’ on the right as seen in the picture was not well integrated into the model.

There was also an issue with the subdominant bent plane in the centre of the construction as it fought with the dominant plane for attention. The bents were too distinct and too widely spread that made it eye-catching and more interesting than the dominant piece.  This planar construction was thus, the first to be eliminated due to the oddly contrasting planes that were being employed. 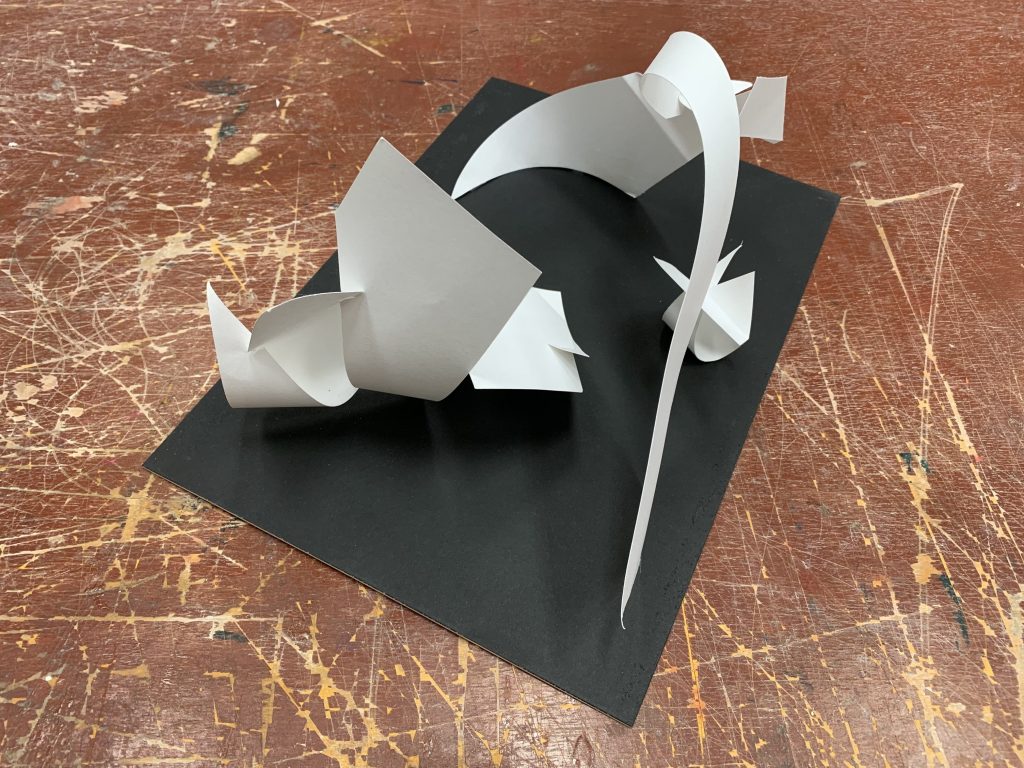 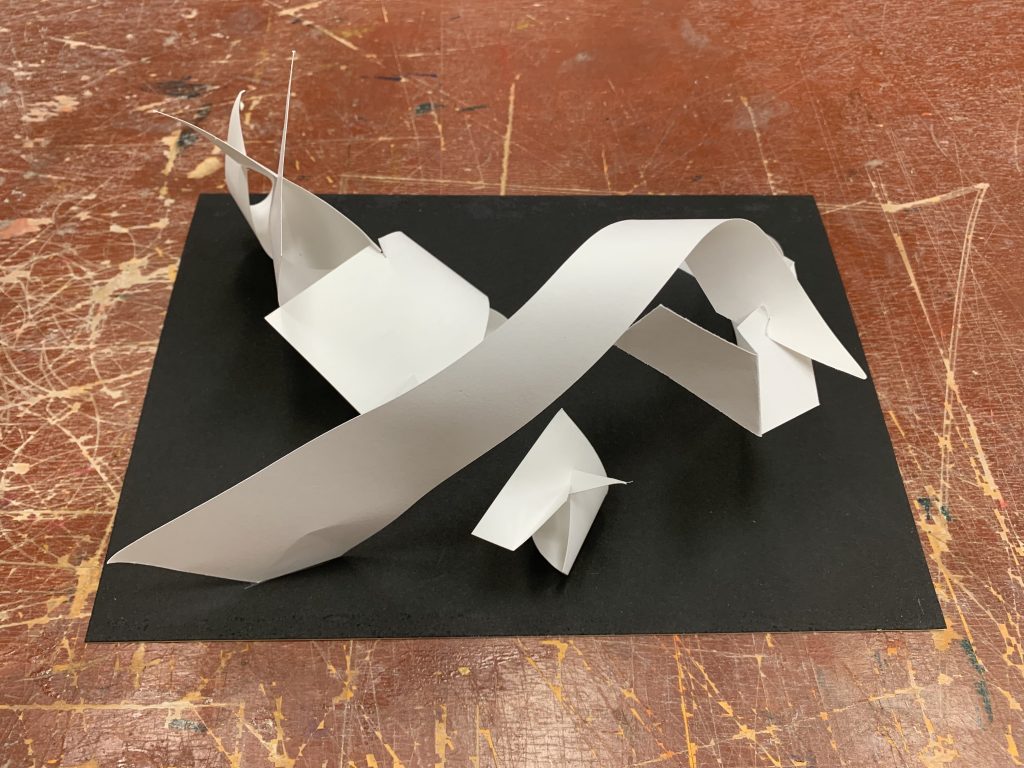 For the third round of constructions, I did a completely new one using 4 different planes but the feedback given was that there were too many ‘closed up’ planes, making it non-dynamic. The angular ends that jut up from the subordinate and subdominant structure were too jarring in the whole composition. It was not a bad structure on its own, but as a whole piece with the long arching curves from one end of the board to another, it didn’t fit as a whole.

There was not much feedback for this construction but I did not choose it for my final work as it was hard to expand on the design due to the closed off nature of the planes. 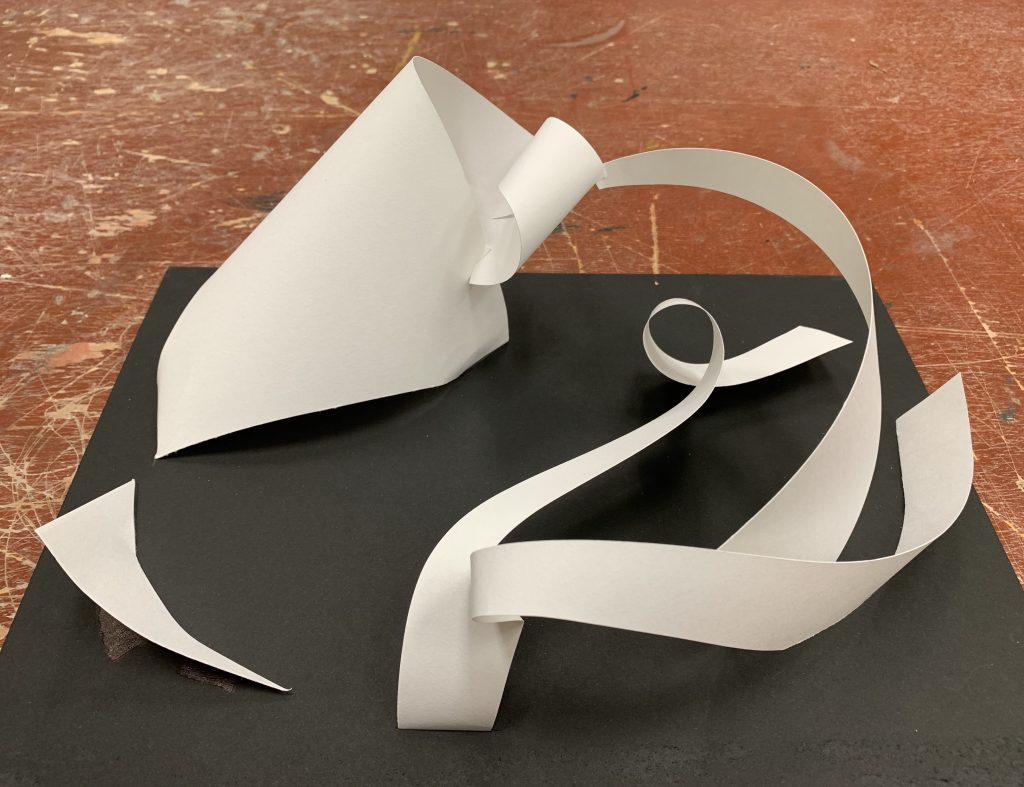 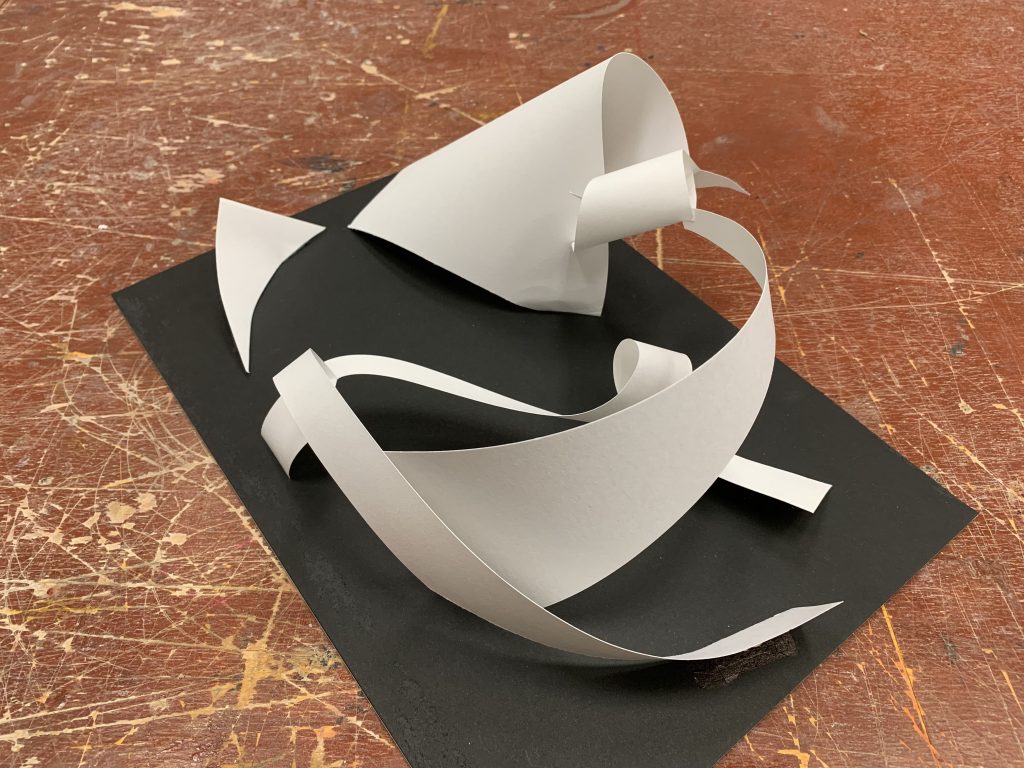 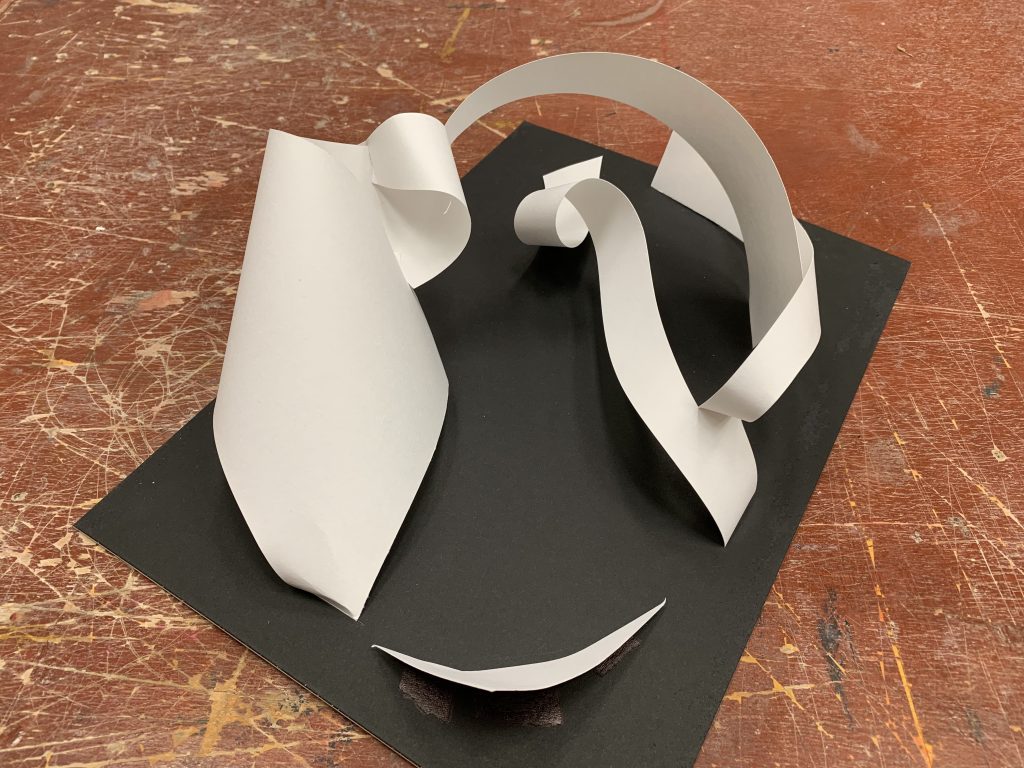 For this model, I tried to reinvent the twists from the second round’s second construction and the dominant plane’s presence from the third. The results took me by surprise when I first created it as I felt very drawn to how the curves flowed from one plane to another naturally. It was fluid, but one thing that stuck out the rather thick width of the broken subdominant plane that twisted on the ground of the construction.

It was drawing attention away from the heavy dominant plane on the corner of the mounting board. This was also likewise for the vertical arch that sprung out from the bottom right corner as seen in the first picture due to it towering the dominant structure. However, I eventually decided on using this planar construction for the final model after switching to art card and a foam board for better control over the end piece.

My final work, Concordia, made by art card on black foam, can be found on the post titled “[DN1003] Project #2 – Planar Construction (Final)”. 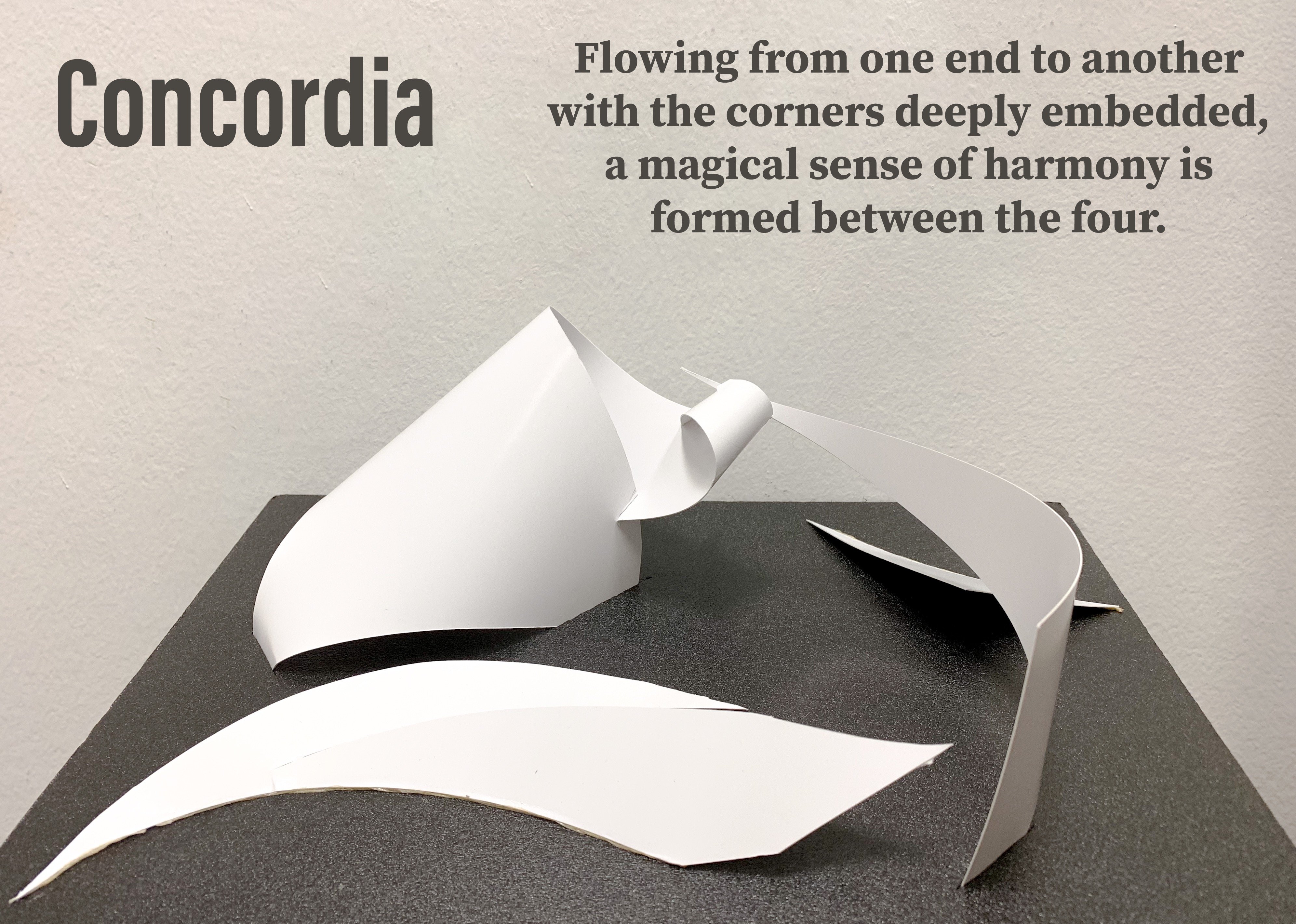 “Design is not just what it looks like and feels like. Design is how it works.” — Steve Jobs

The first part of this final project was to study and present our research on a living organism, its structural qualities and how those qualities help shape the organism’s role in nature / its environment. My group comprising of Ninet, Hin Kei and I decided to work on shark’s scales and in particular, those of the Requiem, Hammerhead and Nurse sharks.

We explored the arrangement of shark scales in relation to their dietary habits, habitat and each of their positions in the food chain. Taller ridges in the shark’s scales help to increase its aerodynamic speed in the water so they are able to catch their prey easily. For the nurse sharks I would be working on, they are noted to have a rather filed down ridge as they spend most of their time on seabeds in shallow waters and do not require such speed to hunt. 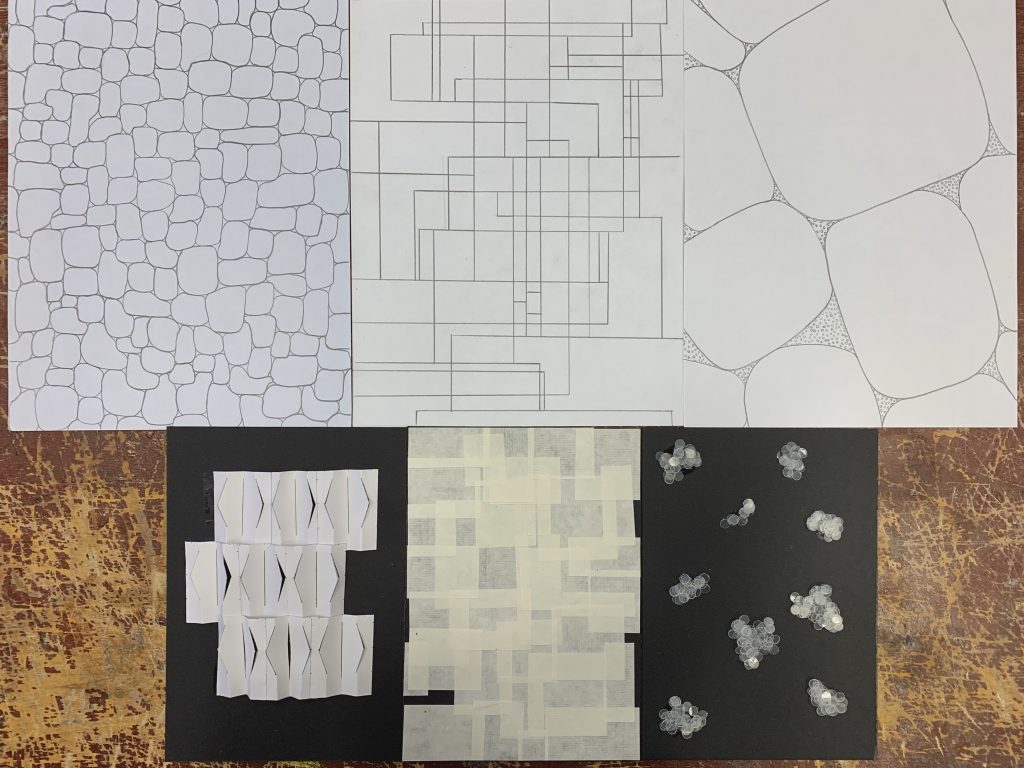 After doing our research, the group split and each of us were tasked to create abstract sketches and initial prototypes for the planes. Studying the scale in detail and how I could possibly render each unit as part of a light filter, I explored various patterns and textures from 3 designs I created.

The first piece on the left is a creation from the image seen above. The scales as seen from close but not microscopic distance appears to be like mosaic tiles that are fitted into a jigsaw sort of shape. Knowing how a single nurse shark scale appears, I worked the features such as ridges and folds into this tile like jigsaw to create a complex organic surface structure. Each unit has ridges that open in an angular shape and let light through. The sides also conjoin with the other units to create a curtain like design that I was contemplating on creating.

Feedback:
– I will have to express the ridges of the shark’s scales in one way or another to make the piece a 3 dimensional surface and not too plain.
– I will need to be able to control geometric repetition for it to be stronger and orderly.
– Even when overlapping, the quality has to be there. Take note that the model should be 3D and not 2D

For this round of prototypes, I experimented and tried to create a lantern from the smaller pieces of scales.

Building from Round 1’s feedback, I enhanced the dynamism of each scale to have ridges and flaps that are more angular than before. I also decided to add in the the circular spots around each shark scale as seen by the glued plastic circles in the centre of each scale. 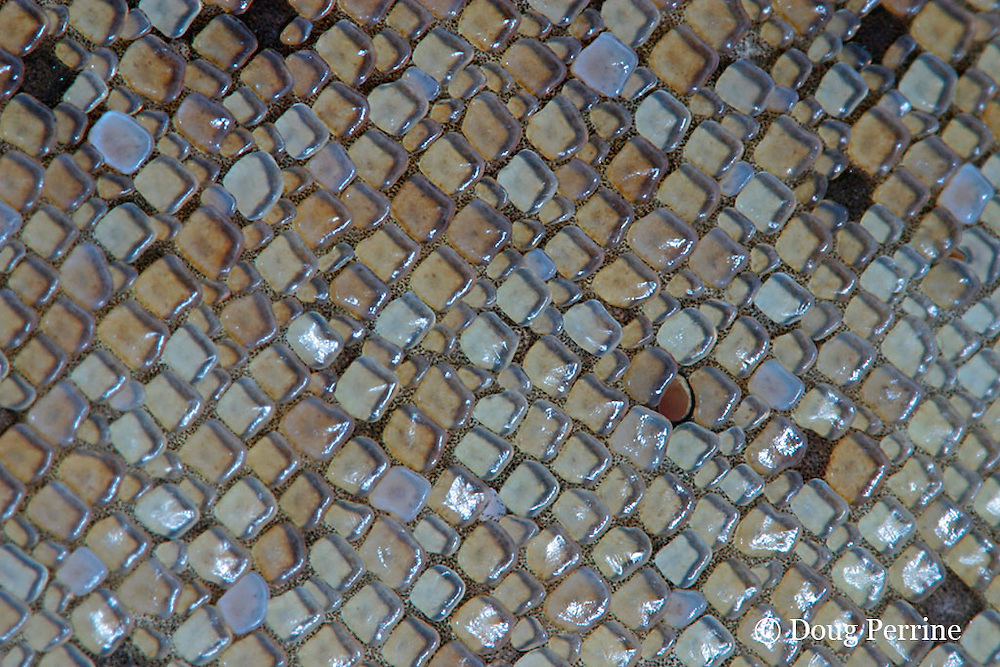 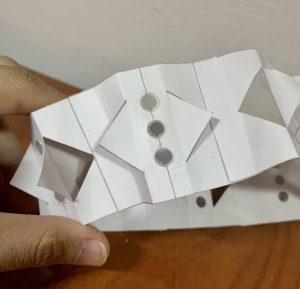 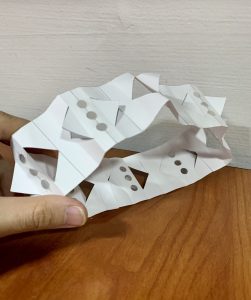 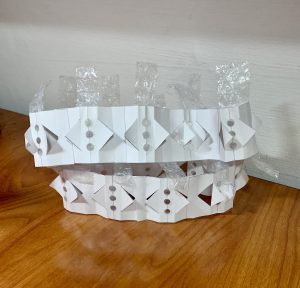 The material for this last round has changed to art card as OSH suggested due to its ability to safely and firmly lodge itself when slits are cut. I came to realise that if I wanted the shark scales to be more so dynamic and hold up in the assembly, I will have to remove the plastic plates down the centre. It was hindering the folds and did not stick well so I removed it completely to leave the punched out portions of the art card. 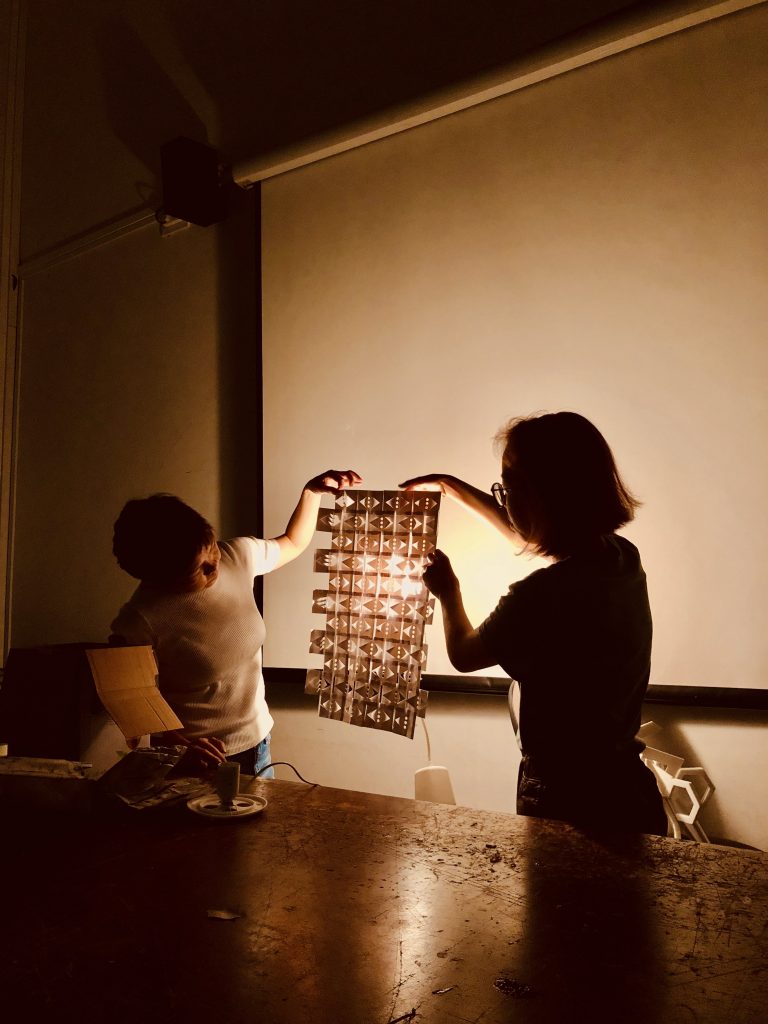 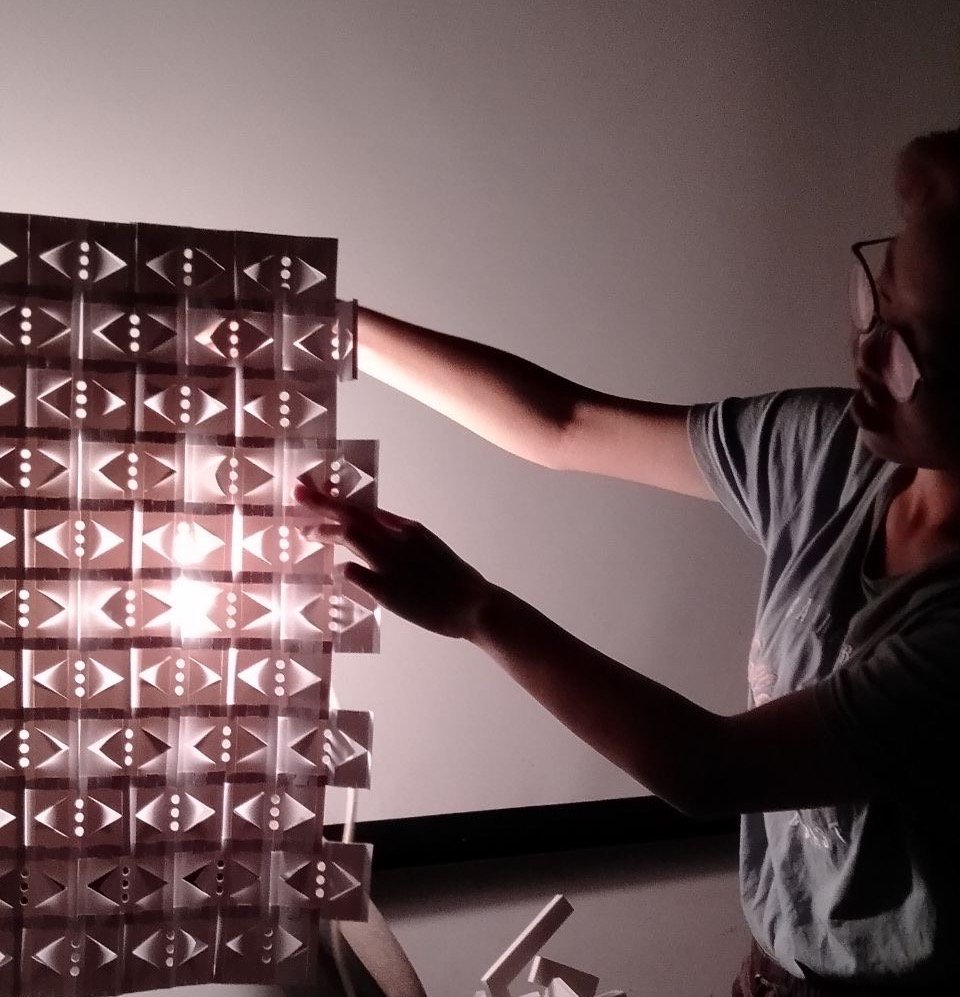 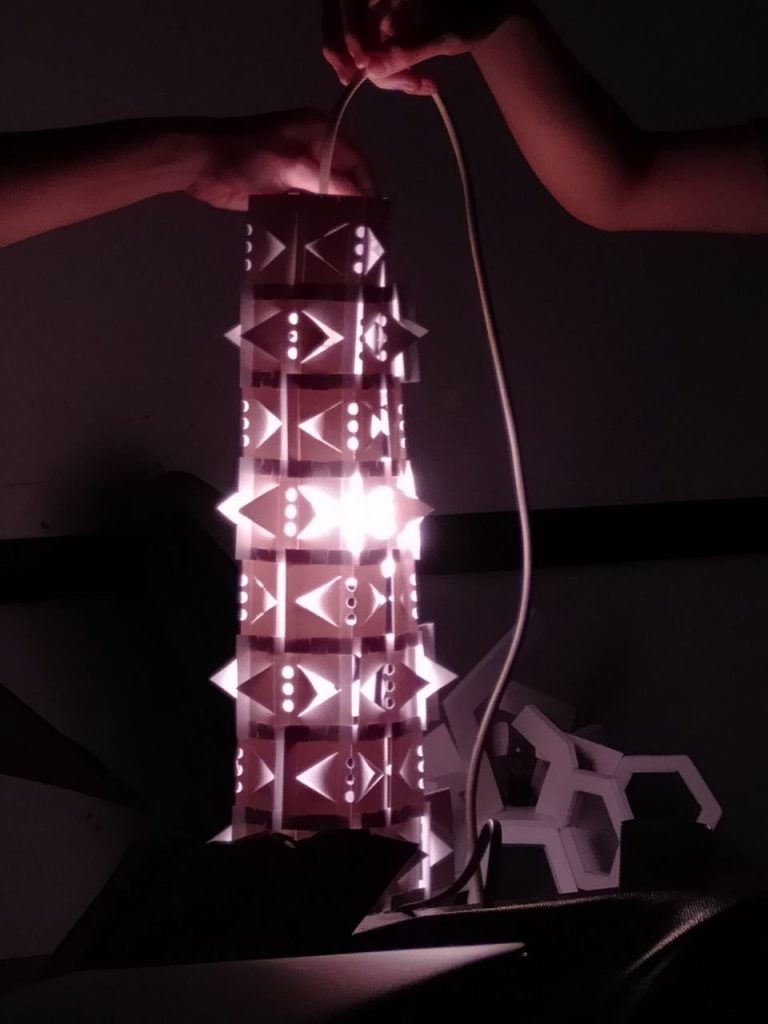 Osh mentioned that the light filter could also be made into a tall cylindrical lantern if not a tapestry and I think it looks beautiful both ways (see above). I am extremely happy at how the light filter turned out. The light was hitting at all the right corners of the light filter and created beautiful shadows onto the ridges of each scale. 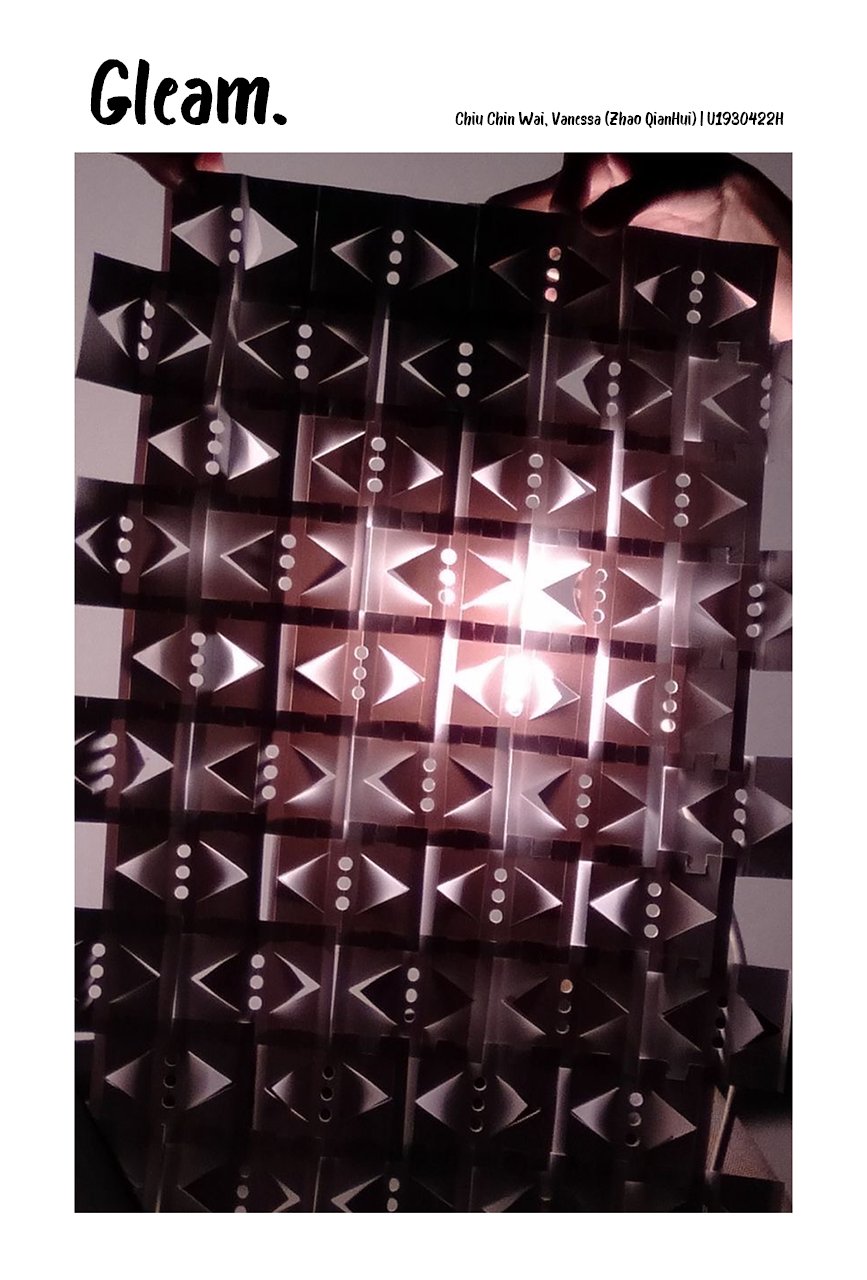