This drawing was done earlier in this semester during a class practice session when we were given a few minutes to capture the model’s posture. I like this posture as it contains a S-shape with the rib cage and the pelvis leaning forward. This sided angle made this posture even more interesting. I am satisfied that I used lines with varies thickness to emphasize the body masses. Also, the protruded rib cage can be seen.

However, I would still like to improve on the legs as the thighs seemed to have the same volume as the claves. Also, the hands are too small, especially the right hand. It will be better if I could have drawn the hands and foot completely for review afterwards.

I selected this as it is one of the few drawings which is from the backside of the model. The posture was interesting as the hands of the model are stretching towards two different directions, on which I spend some time to figure out how to get the correct foreshortening.  Besides, the pelvis block is slightly tilted forward, and I am quite satisfied that I had shown it through the curves. My favourite part of this drawing is the shape of the shoulder and the upper arm, as different masses are identified.

However, I would still like to improve on the proportion of the figure as the legs, especially the calves are too long. Besides, for the hands, the right hand, in particular, is too small compared to the whole figure. 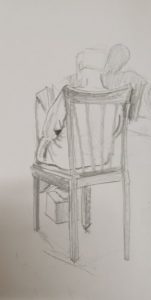 This drawing was also done during class time when the model was sitting on the chair throughout. Amongst all the other drawings, I chose this one as it shows the depth in space and I tried to add in the people behind the model as well. I tried to show some light and shadow relationships also, although more can be seen from the chair instead of the model. In terms of the clothing, I did use different tones to show the folds and the soft texture of the shirt. While it was not very obvious on the pants as the legs were blocked by the upper body.

I would like to improve on the figure further, especially the neck, which seems very two-dimensional now. Also, the upper body looks like a massive block without showing much proportion. 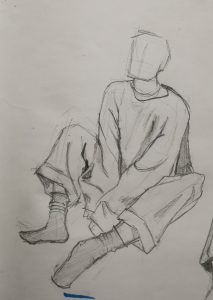 This drawing was from one homework when we were asked to draw based on real people. I choose to focus on the folds of the clothing as we were taught on it during the previous lesson. I am satisfied with the emphasis on the different folds and I also had a better idea on the different forces which led to the folds during the process. Besides, I also tried to show the different textures between the soft shirt and the pants which are relative tougher.

However, I would still like to improve on the figure itself as the upper body is not identified clearly. The dark side seems like the back is bent backwards while from the front, it looks like the rib cage is leaning forward. Also, the transition between the neck and the head is not very nicely drawn as well.

This is selected from my sketchbook as well and it’s captured which the character was walking. For this I also focus on the clothing. I am quite satisfied with the general proportion of the figure as it looks generally natural. Besides, I also added in tonal designs to create depth.

However, there can still be improvement such as the proportion of the head and the shoulder, also, the foot seems relatively small.