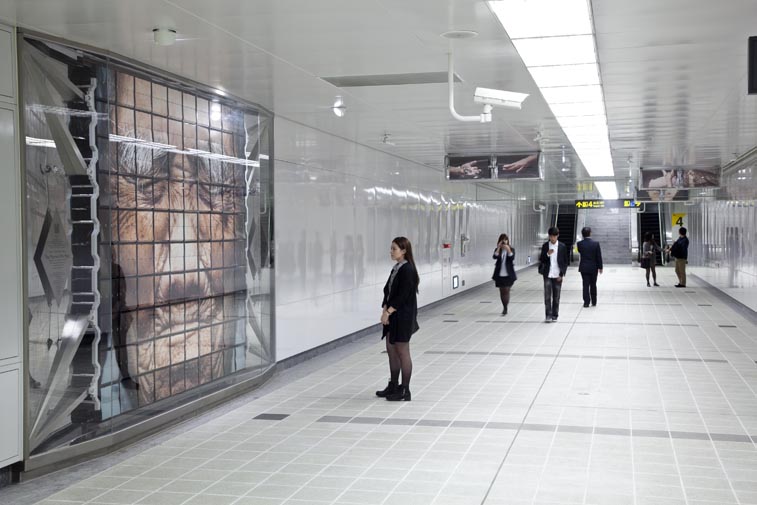 Huang Hsin-Chien is a contemporary new media artist from Taiwan. Huang is expert in large-scale interaction, performing, mechanical apparatus, algorithmic computations and video installations. Now he is also the director of the Digital Content and Technologies Program in National Cheng Chi University in Taiwan, my home university.

He studied mechanical engineering in National Taiwan University. Then he studied industrial design in Art Center College of Design and Illinois Institute of Technology for master degree in design.

His first rewarded creation is “Time of Dream” in the first year of new media art competition “New Voices, New Visions,” when he was a Ph.D. student of the graduate school of Illinois Institute of Technology in 1994. It was based on a book “Einstein’s Dreams” talking about a series of fantasies about time and gave him inspiration to create an interface between words and images. Readers were able to travel between different times and stories, such as separating themselves from their own shadows or visiting the rooms with reversed causalities.

During that period, he also won acquaintance of several people such as world-renowned multimedia artist Laurie Anderson, who collaborates lots of projects with Huang, such as  “Puppet Motel”, “Here” and “La Camera Insabbiata,” which just won the Best VR Experience Award in 2017 Venice Film Festival.

Actually, after his graduation, he served as a general art director in Sony online game business in West United States for several years. He said,

“When I was in the computer game industry, many of my colleagues were from the military. They created games for kids using the same technology from military simulation and training. After the Columbine High School campus shooting, I started to look deeply into the characteristics of technology and to reflect how humanity is altered by technology.”

Eventually, he went back Taiwan and is devoted in art creation since 2001 and rebuilt his profession as a new media artist and made the relationship with society.

He not only produces art creations that are presented in museums and art-related festivals or exhibitions, but also participates in the visual or stage design for well-known singers’ business concerts in Asia.

The reason I regard Huang as a contemporary new media artist is that he meets the criteria: the combination of technology, live performance, interactivity, collaboration, interdisciplinary and something to speak out.

In terms of technology, he already attempted to use the camera to project participants’ image on the screen in 2002, but the differentiation between pervious similar works, instead of a complete colored-silhouette or the real image, he picked up the silhouette of birds and rain as materials in the work, “Rain.” With the help of the interactive software and the formula of acceleration of gravity, the image can be projected in sync and the images of rain and bird that are from the nature can be presented smoothly and cope with the natural movement. And in his latest rewarded project, “La Camera Insabbiata,” he also utilized the techniques of the virtual reality device to make people to go in the other world where reflected on the reaction of the participants in the real world to create a feeling of “suspending disbelief.”

When referring to the concept of live performance, the representation of Huang’s work is “Road” in 2015, an interactive multimedia performance. The performance used real-time motion capture technology to transform the performers’ movements onto projected background. What’s more, it is an interdisciplinary art work. Huang collaborated with the professions from dance, visual design, music production and playwright. In his interview, there is a vital point of view for the collaboration of the interdisciplinary.

“It is a disturbing problem when collaborators always put the goals or the ultimate achievement in the first place, especially from different fields. Because people involving in would have preconceived ideas about how to do is sensible and what is necessary. However, for people who are professionals in different specialty, they may not think so.”

I think it’s essential to keep this perspective in mind, because the creation can be an innovative sparks when everyone throws away his/her own rules and views.

There is a representative of interactivity, “Window of Heaven and Earth, Mirror of the travelers,” it is a public art in the airport MRT station in 2017. When people pass by the screen, the visual would reflect their images that the historical architecture is as a material. Besides, the screen also reflected the real-time weather and sky color that made this work more real in the virtual image. At the aspect of collaboration, Huang not only collaborates with other artists, but also cooperates with the audience. In “La Camera Insabbiata,” he recorded the audience’s footage, which were sound being transformed into the images, as a new material for the work in the next audience’s spectacle.

In Huang’s works, the techniques, forms and material to present or utilize in an art are not chosen randomly or just catch up the fashion. He always wants to talk about something in his works. Take “Window of Heaven and Earth, Mirror of the travelers” for example. Why he chose to present Taiwanese architecture from different periods as a material is that the airport is a symbol of departure, where people have an emotional paradox that combines with the feeling of expectation and missing. The historical architecture represents the impression of hometown in peoples’ memories, who have left their hometown for a long time. And these architecture made a comparison to the urban life which is noisy and over-mechanized.  At the airport, before people left, Huang hoped to create a dream that took us back to the calm and natural countryside where can smooth our disturbed mind.