What is the content of the work and who is creating it?

The idea about the piece is that we now more than ever begin to merge into one culture. We become a world citizens. However does people still assume certain things when they think about different places and the people that lives there. And as a person included in a certain nationality what do we think about ourselves and how does that result compared with what others think about us match up? Those who created this art where people from mine and Najihas social circles.

Where does this work take place?

The art took place on the internet with help of the sites polleverywhere, Instagram, Snapchat and Facebook did we create this peer to peer art.

How does this work involve social interaction?

Without any answers the artwork would not exist because it is the answers that build the art, it is literally their words that makes the art. And for the participants to find the art must we, Najiha and me reach out to them in some kind of way. Thereby making a social interaction.

It gets broaden. One person can never act or think as a bunch of people making it hard to get the same depth and different aspects that a group of persons can. In this case in particular it also serve as a purpose to get a understanding of what different persons from different culture backgrounds think about other nationalities and what one nationality think about themselves. This would not be possible if it was just one person creating the art.

From the beginning had my partner Najiha already an idea on what she wanted to do for this project. She was interested in the ethnical culture and how it had gotten effected through us, humanity starting to become more of international citizens.  She had an idea about targeting the Malay / Singaporean population and asking them through social media what was their expressions where about their culture that they identified with. But when I came in to the picture did it mean some problems because I do not have a large circle of people that identify themselves as Malay/ Singaporean in my social network. However do I have a large number of people that identify themselves as Swedish. Therefore did we expand Naihjas idea and we decided that we should ask Singaporean and Swedish citizens what they both thought about the other culture and what they thought about themselves, where the answers created art.

So the brainstorming part wasn’t that big for the both of us when we had a clear picture of we wanted from the beginning and with a relative tight time frame did we stick to this first idea.

The outcome that I wanted was to see was the difference between what other nationalities thought about each other and if they corresponded with what they thought about themselves.

We gave our participants a big freedom in what they could answer. We gave them an open question that you could answer whatever you wanted on, we did just want them to write in english. What they could have done is to be dishonest and not answer truthfully. That is also something we cannot check if they did or not. By this they would create a fake picture of what they thought. Hopefully did not everyone answer with a lie. The beautiful thing with the word cloud we used is that if someone answers the same thing as someone else the word will become bigger than the others. So you could see what was the most answered word.

I think that the work we did will be stronger and more diversed. However could the art piece become a bit “to much” id it would be thousands of answers. So something I did not know before starting the artwork was that the maximum number of answers for my polls where 25. However now afterwards I think that it turned out alright. I did however had people that wanted to answer that couldn’t because of the limit. Another thing that didn’t go as planed was that if a person answered a sentence, this sentence would be split in to words. Making the sentence “walk in a slow pace” become five different words. Making it seem that the person think that the other nationality is  walk, in, a, slow, pace. Which is not so correct. If we would this over again we would give the participants more constrains and say that they could just answer one word. 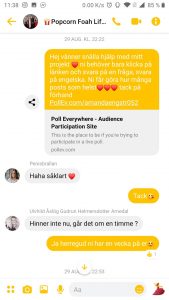 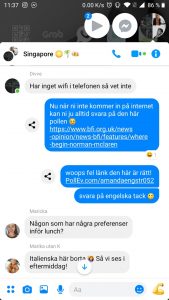 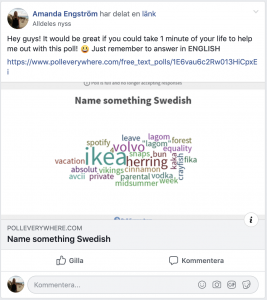 Exampels on how I used my social media. Both through private messengers in groups. And also in bigger groups where I am a member. (yes I know that the first two messanges are in english, sorry about that)

And result of this is now shown below. The first poll is a poll where I and Nahija both asked Singaporeans and Swedish people to answer making it a mixture of both in one. Later we made the polls so that Each nationality answered in different polls. 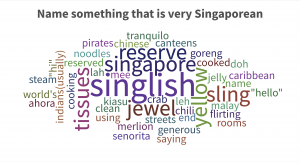 The poll where both Swedish, and Singaporean answered 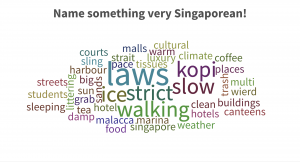 The poll where Swedish people answered about Singaporean 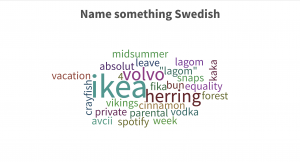 The poll where Swedish people answered about Swedish stuff