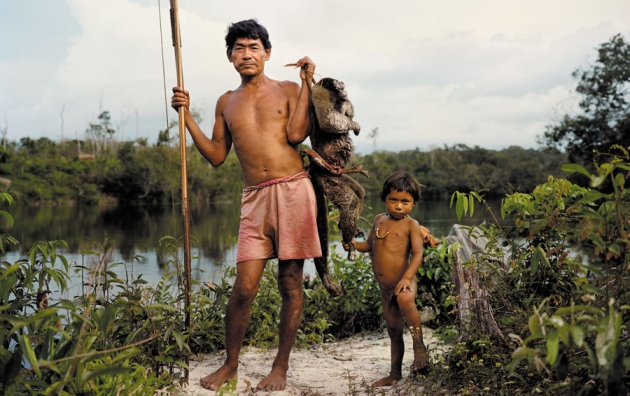 The Pirahã Tribe: This small native tribe of the Amazon rainforest has an extremely limited language of humming and whistling (Davies). They use no numbers, letters, or art; and—more importantly—no concept of time. Specialists such as linguist Dan Everett have traveled to the isolated Pirahã villages of Brazil in order to attempt to teach the tribe how to read and write (Davies). Their attempts have generally been unsuccessful. To even consider introducing the concept of time to this tribe would be foolish, as their concept of numbers is non existent. They have no specific religious beliefs—no reverence to ancestors or heroes of the past.
There is no past tense…because everything exists for them in the present. When it can no longer be perceived, it ceases, to all intents, to exist… The linguistic limitations of this “carpe diem” culture explain why the Pirahã have no desire to remember where they come from and why they tell no stories. (Davies) So, although it may be difficult for many people in time-dependent cultures to understand the ways of the Pirahã tribe, there is an important lesson in their relaxed lifestyle—encouraging people to live every moment for what it’s worth.

The Hopi Tribe: The Hopi Indian tribe is known for their interesting language: due to its lack of verb tenses and resulting omission of any conception of time. The closest that the Hopi language comes to a sense of time are two words in the entire language: one meaning “sooner” and another meaning “later” (Le Lionnais). The Hopi tribes live, for the most part, in northeast Arizona. They make their homes atop flattened sections of hills called Mesas, in villages called “pueblos” (“Hopi Indians”). The Hopi Indians are also well known for being a very peaceful tribe.
Cultures with Unique Views on Time

Nomadic Tribes of Afghanistan and Iran: These peoples of nomadic tribes do not feel tied down by time in any other for than the seasons. In the spring, they migrate from the valleys to the mountains, where they will find richer and more abundant grasslands for their animals (Goudsmit and Claiborne 21). When the warm days of summer have passed, the nomads head back to the valleys from which they came in spring. Often this is a fairly long journey. This cycle continues throughout their entire lives.

Asian Buddhist Culture: Although the system of months that so many people live by today is a lunar concept, the strictly lunar aspect is sometimes given little thought. Buddhists have a stricter lunar calendar, because the moon has always been to them “…an object of wonder and veneration” (Goudsmit and Claiborne 23). Buddhist monks meet for prayer twice in one lunar month, at the beginning and end of the lunar cycle. The Buddhist calendar consists of 12 months. Throughout the year, the days in each month alternate from 29 to 30 (“Buddhist Calendar”)—making each month shorter, on average, than the months that many other modern societies are used to.