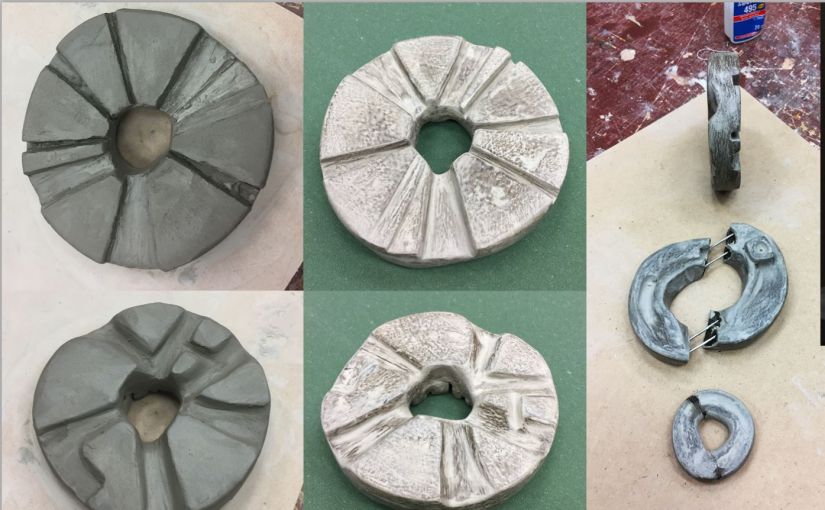 I used the scrap tower from my experimentations with clay and moulded a doughnut shape and added some indents and geometric elements. I again mostly used rounded spatula-esque clay carving tools (repeating my first mistake) which resulted in a lot of rounded edges.

The closed ring represented the cyclicity of the dance piece and the indents were meant to show the rigid and jagged movements of the dancers. However, I felt that an element of rhythm was lost as the placement of indents were very organic.

When dry, the clay form was smooth and had the weight that I desired to convey the seriousness and the dread I felt from the dance. I sanded the piece with three grades of sandpaper from rough to fine. Then, I polished the ring with water to achieve a glossy, stone-like finish. I repeated this sanding-polishing method for the rest of my clay forms as I found that the resemblance of stone emphasises the physical weight as well as thematic heaviness the dance piece conveyed. 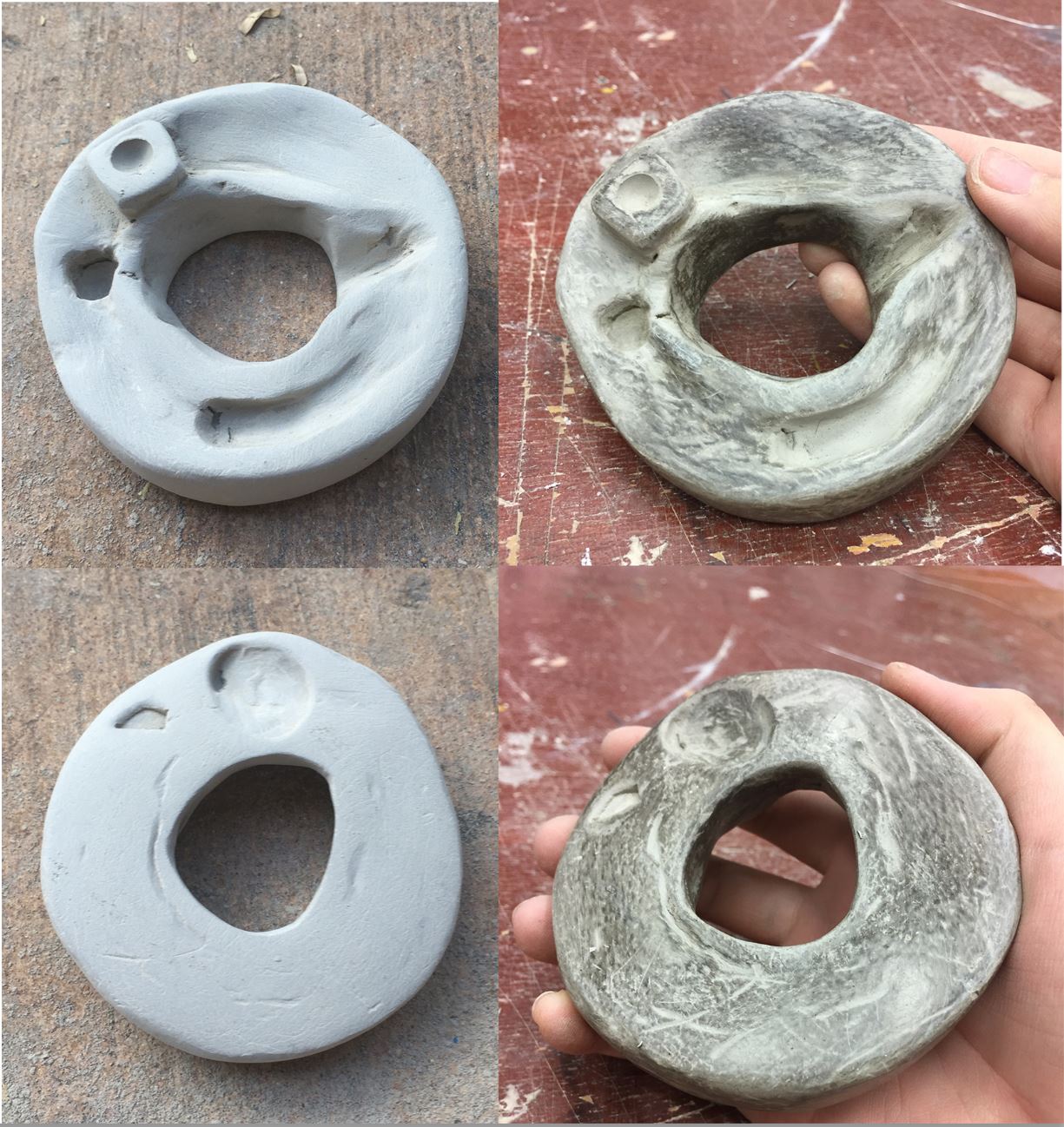 I then moved on to creating more clay rings as I felt the form best conveyed “cyclicity”. Additionally, I chose different elements to add or subtract to the rings to convey a narrative in going against the norm. The first ring would be the most regularly geometrically composed whereas the last ring would be a smooth and seamless loop.

Larger than the rest and to conveying order, rigidity and harshness.

I also took into account that the rings had two main faces and thus I utilised both of them to convey the narrative of progressively breaking out of the cycle.

Therefore, for the other face of the ring, I added elements that

This distortion and warping would show the transition of rigidity to freedom from geometric bounds. This is to mirror how in the themes of the dance piece, I recognised that there was a sense of ‘going against the norm’ in which there would be an individual moving towards more fluidity and independence.

The final form of this freedom would be the simple ring with no concaves or nooks and crannies. The smoothness in the ring represents infinity without obstacle in contrast to the previous two rings. 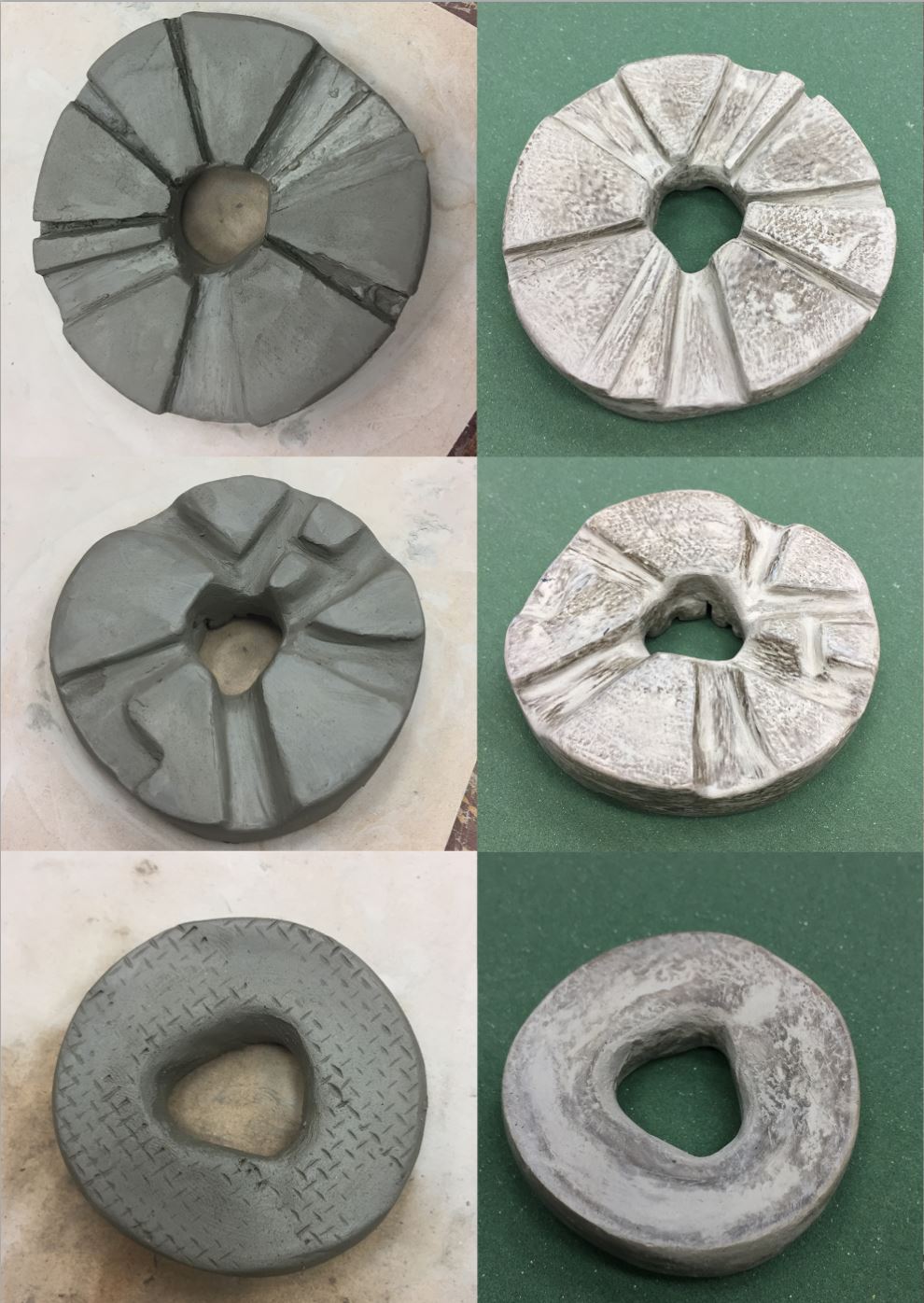 An issue I faced with the clay rings during and after sanding is that they would break in half at weak points. I adapted to this as for the smallest ring and the geometric 2-faced ring, I applied contact cement and adhered the pieces together into a whole. For the first ring I made, I decided to adhere short runs of wire in the gap between the cracked halves. I felt that this would emphasise the channel as well as symbolise a sense of scaffolding and internal reinforcement.

Wire is a very high tensile material and can thus convey strength and restriciton. 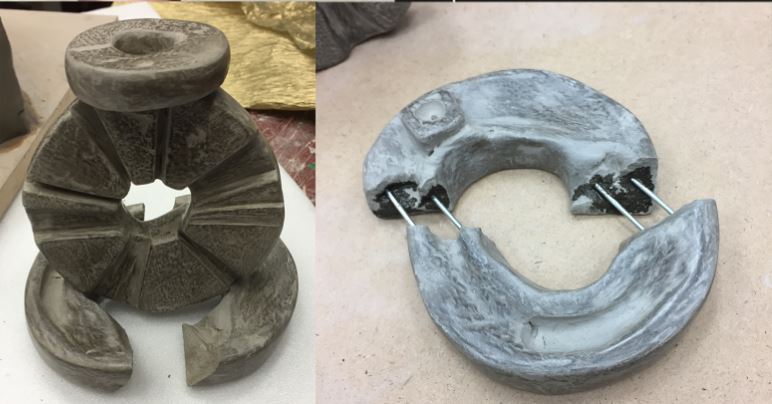 ^An experimental composition of the three rings.

^An experimental composition of the three rings on a square MDF board. This layout was more ideal as it created a linear line for the eye to follow to understand that all elements were connected.

In an attempt to follow the Dominant, Sub-dominant and subordinate framework, I wanted to include a larger form to the composition. With the understanding that forming a whole slab of wet clay into a semi-cylindrical form and drying it within the week would be unrealistic and a waste of resources,  I attempted alternative methods:

The final surface of the dried clay is not ideal and rather distracting as it introduces a new texture into the work. 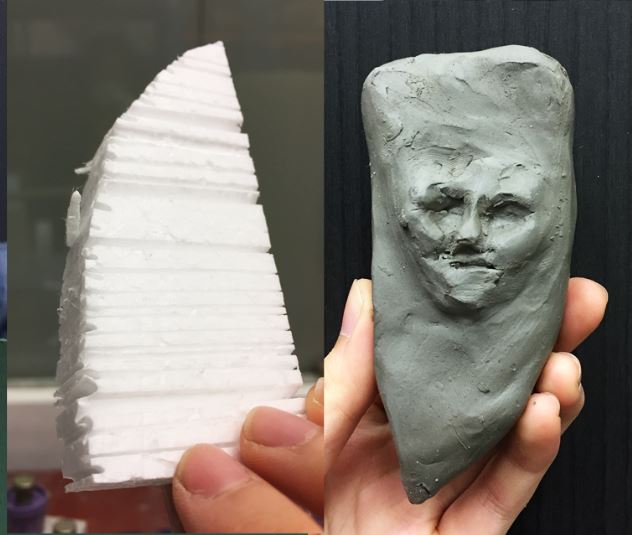 Tying the whole work together:

Wanting to have an element that would unify the three rings together to convey a progression, I strung a piece of wire through the eyes of each ring. This also creates visual harmony with a chrome wire running through the whole work. 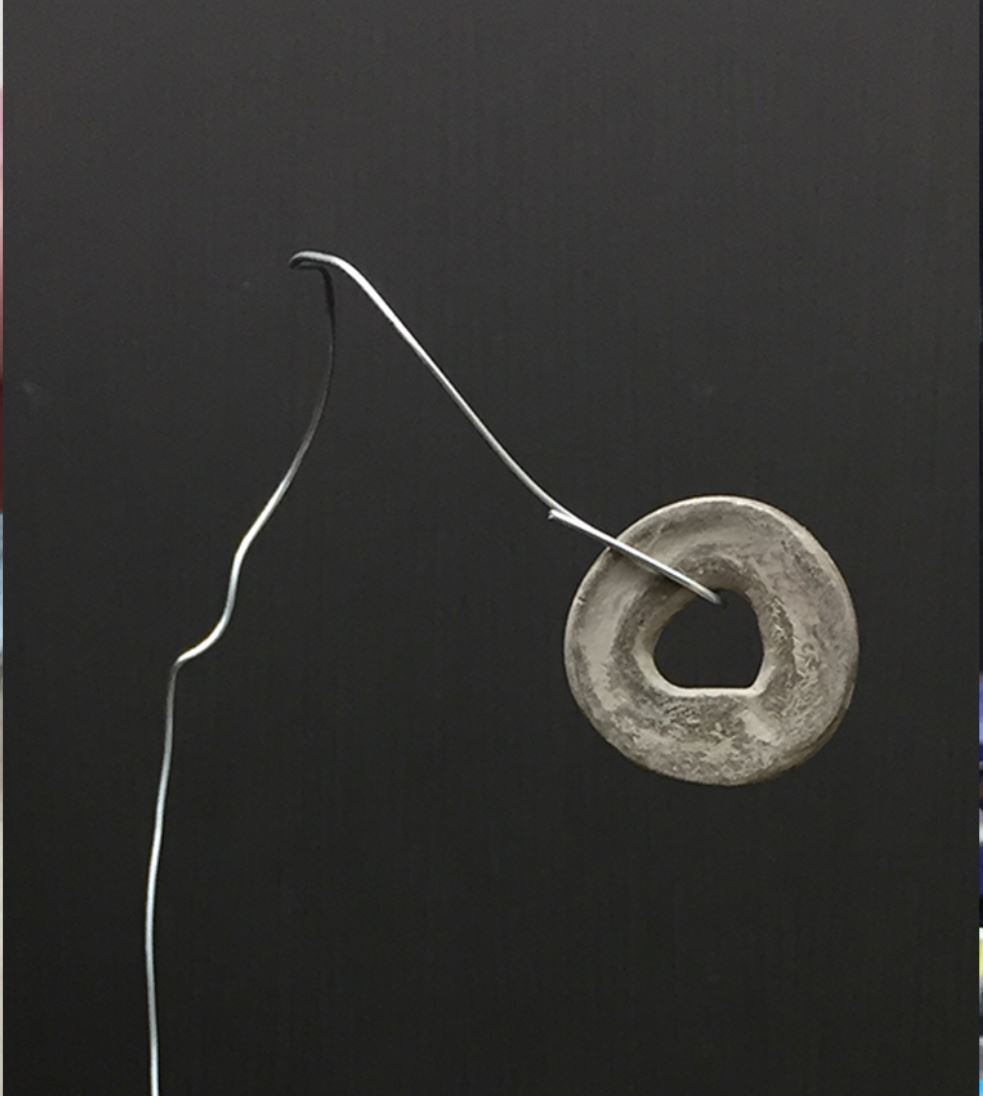 Suspending the final ring to show the lightness and freedom of going against the norm. 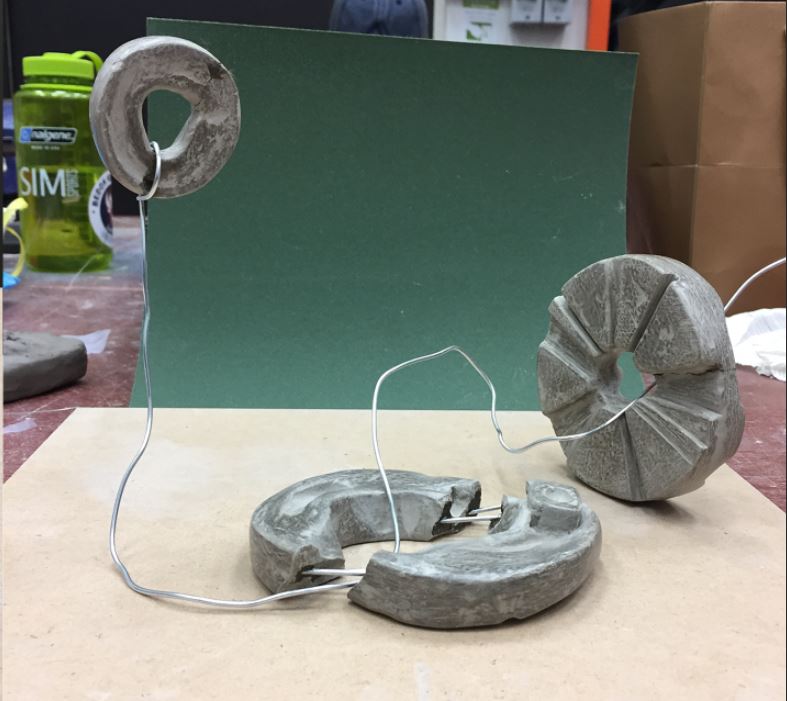 The kinks in the wire also conveyed rigidity and stiffness and suggests an offbeat rhythem where they go up and down at random points of the wire.