Vagabond – “Get ready for a rollercoaster trip all over the world.” 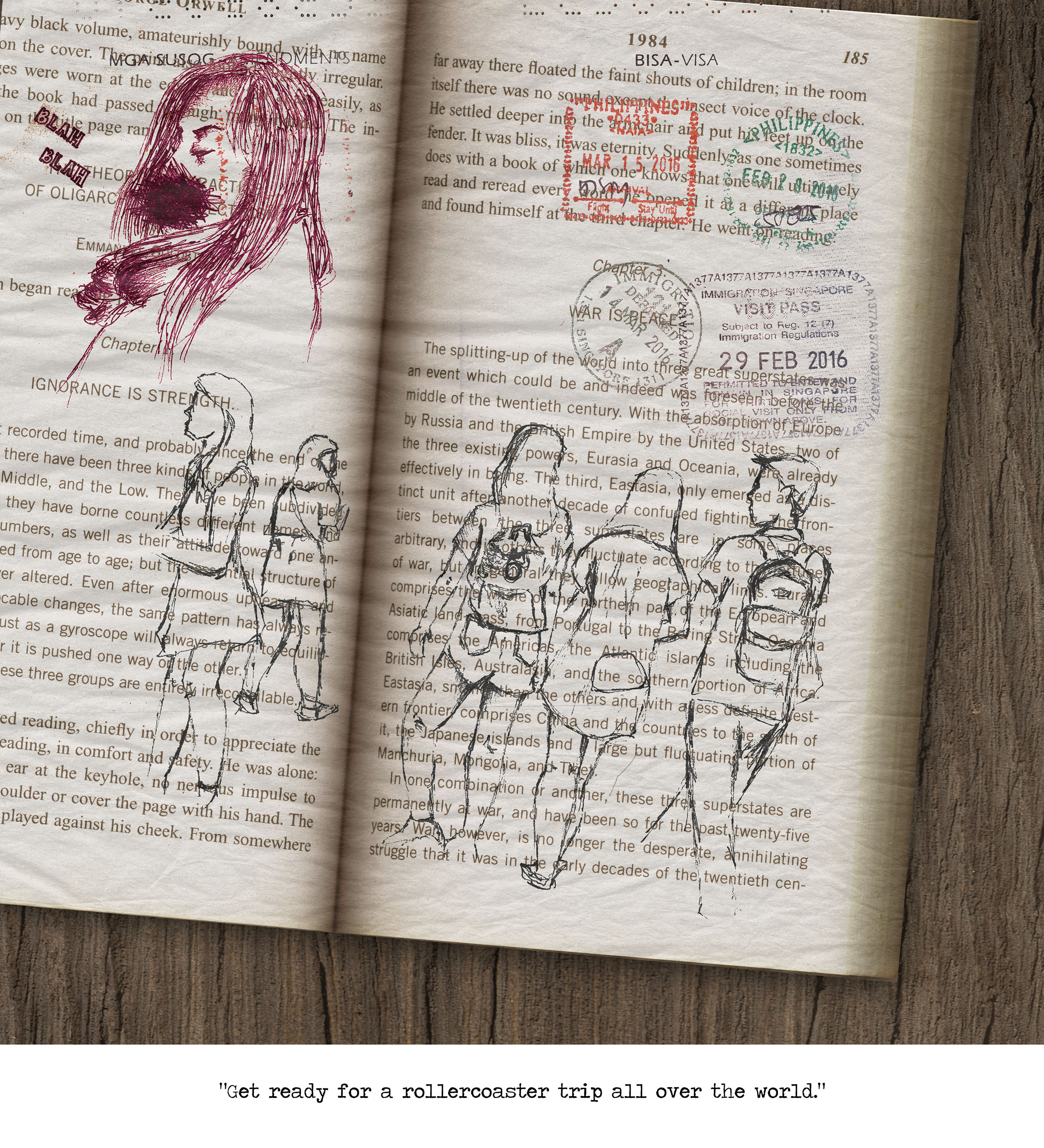 Those who travel often like to keep a journal as a memoir of their trips. The composition hence resembles a travel sketchbook, though on a book (which I am currently reading by the way, 1984 by George Orwell), being that I did not want it to be a typical sketchbook. I wanted to portray the side of me that also gains inspiration in words and quotes. Moreover, visa stamps were also placed to highlight the idea of travelling, together with a sketch of my friends.

New Places – “Give each of your temporary homes a chance to cast upon you a larger view of the world and show you its beauty.” 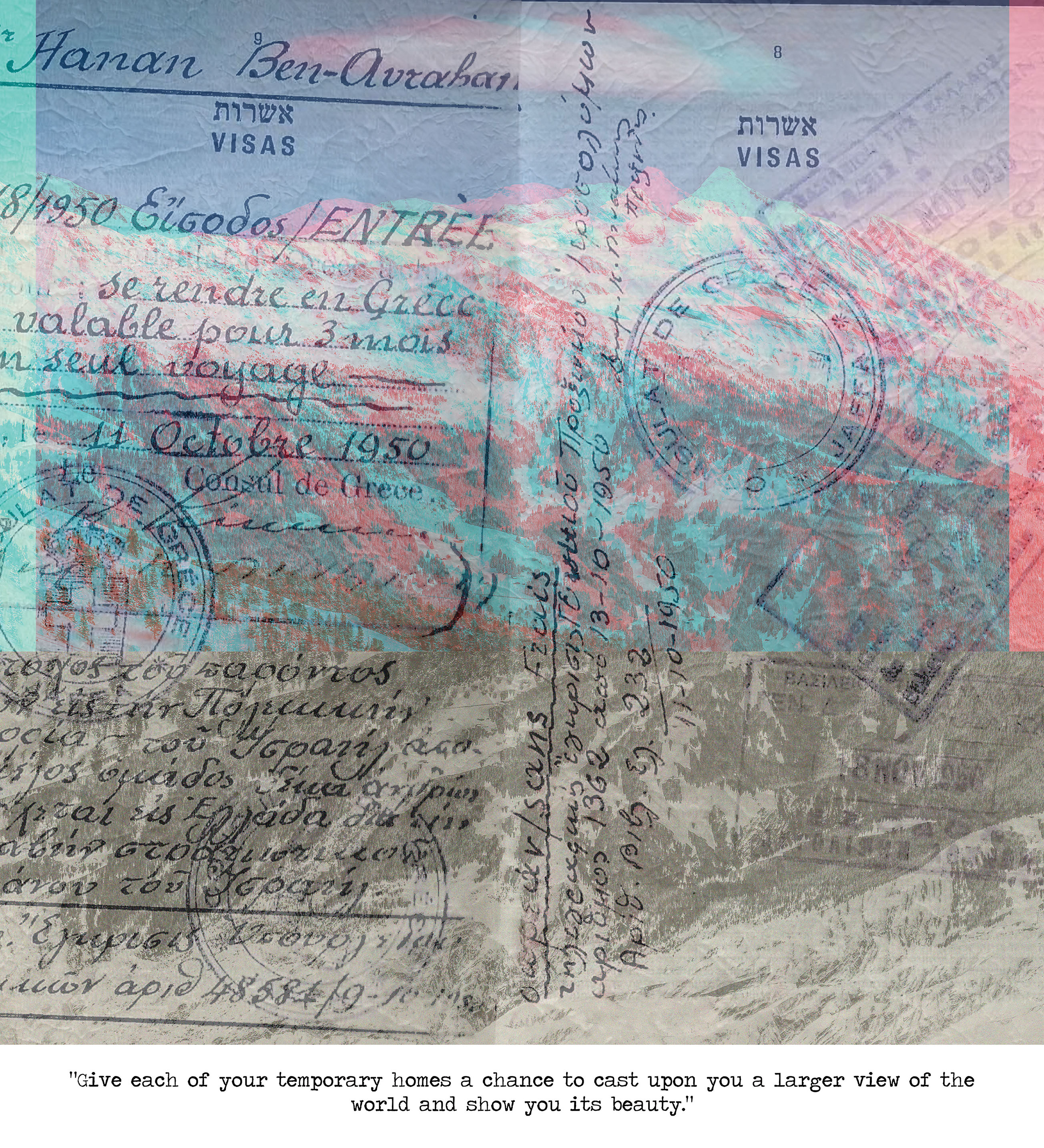 An attempt to display motion or instability using a single source image. A 3D-like image remains above as it provokes a sense of illusion to the viewer, while the black and white image attempts to offer balance within the composition. An old passport image is placed, though, this time, larger in its proportion. Creased paper texture is added as a layer as well.

Anxious – “Here’s a warning though; home will never feel the same to you. Lots of people walking in and out of your life. Instability will become the norm. Will you still be up for it?” 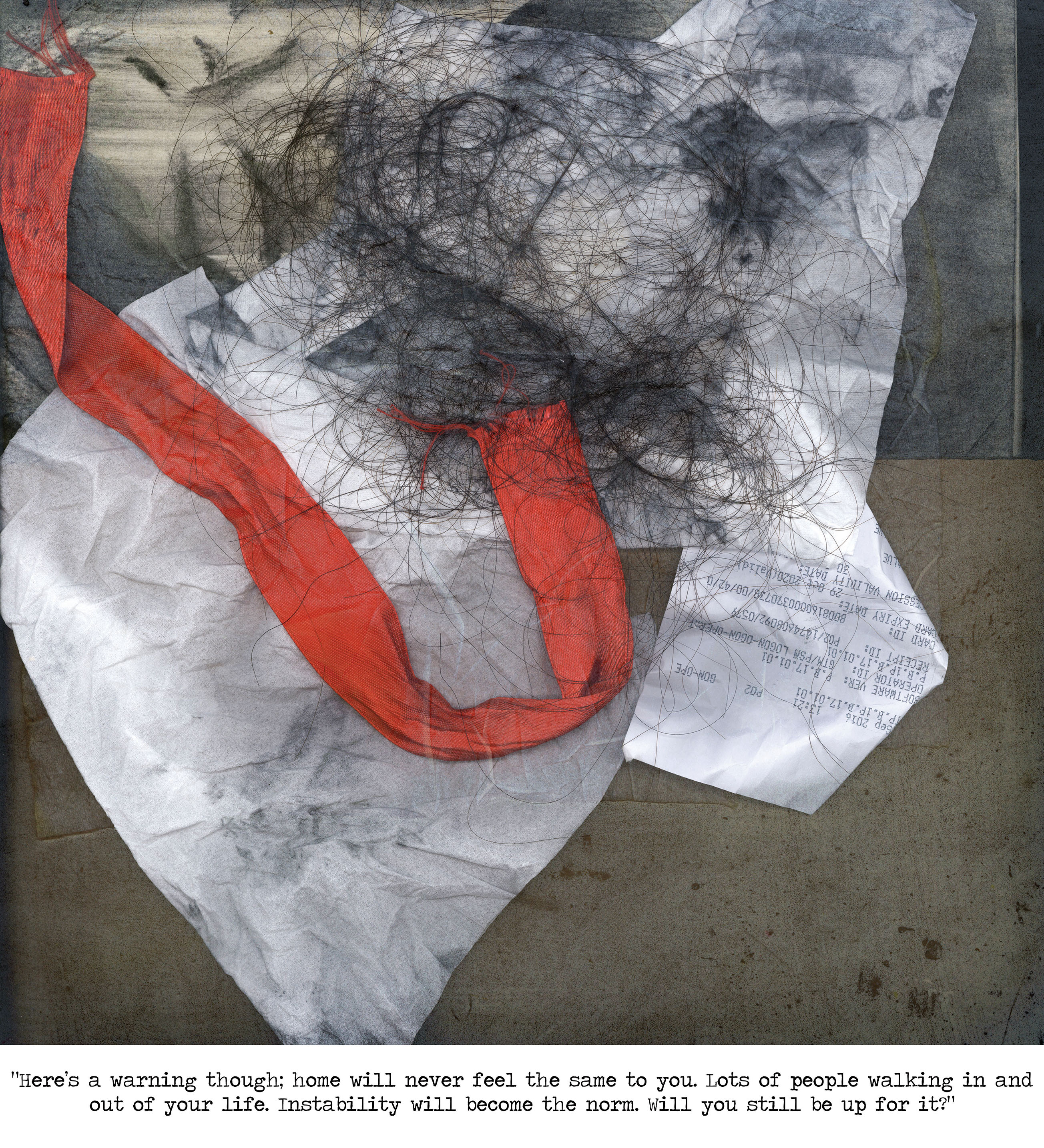 A tricky concept to portray. The image is created by scanning items into a single composition. I collected hair that is dropped on the floor and scanned it, as it brings a sense of dislike and uneasiness when seen, which is what one would usually feel when anxious. The use of toilet paper gives texture to the image, similar to the receipt. Colour is offered by the red ribbon to further amplify the emotion that I intend to portray. Overall, the composition appears similar to what can perhaps be seen in a trash can – a collection of unwanted things. With this, it is like when I feel anxious moving to a new place, being that I feel as though moments will be forgotten when I move away and will eventually become unimportant.

Passionate – “If we stop listening to only our thoughts and try to open our mind to what’s happening around us, we’d realise that our actions can make an impact, big or small.” 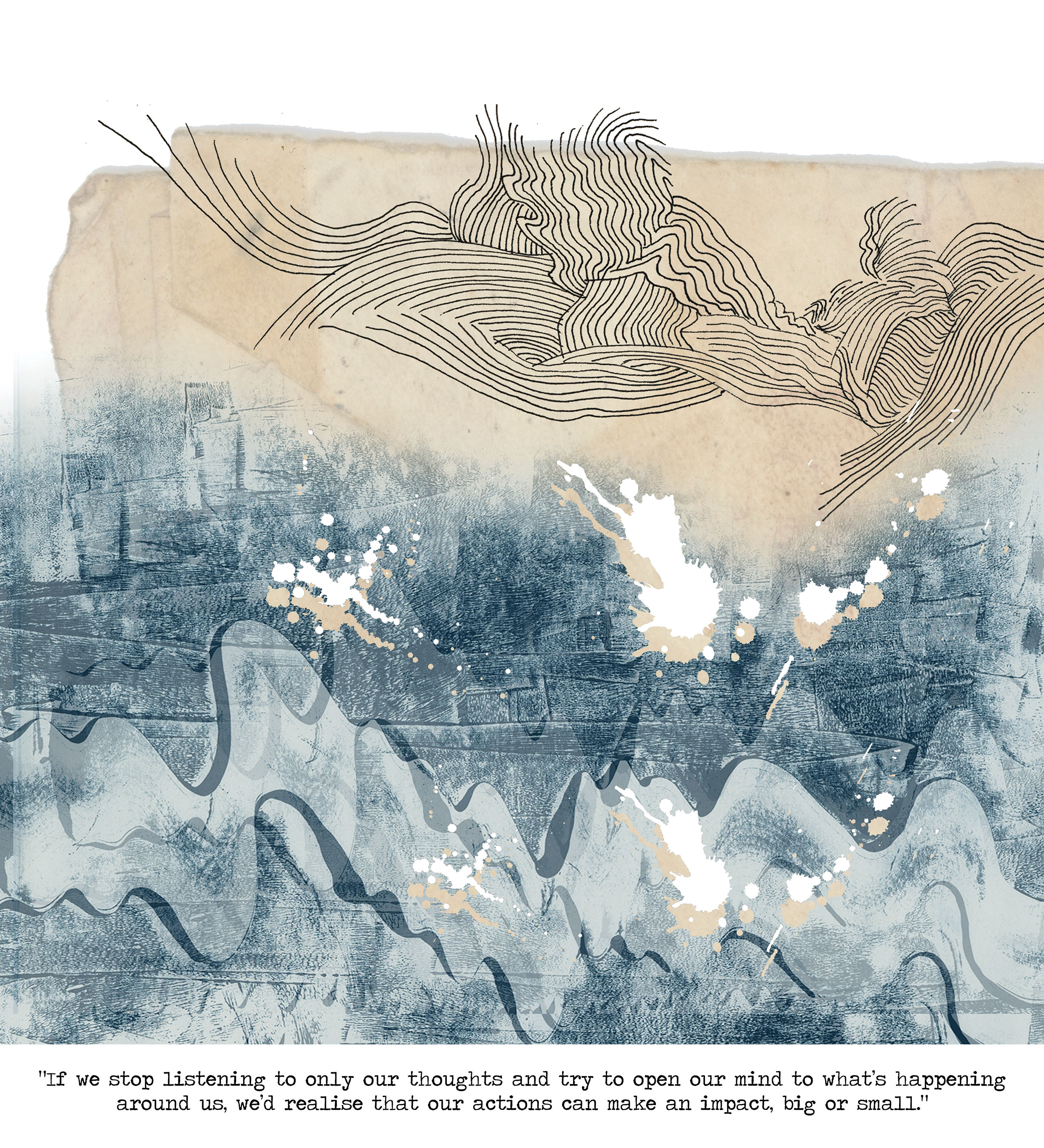 A tempest, I believe, symbolises passion – a burning, turbulent and uncontrollable desire. For me, passion sometimes means doing something you believe in despite others doubting your ideals. It means going out of the norm and use the tempest-like passion in you to go after what you believe in. This is exactly what I am trying to portray in my composition. I used an old monoprint of mine which resembles waves and played around with layers to create more instability.

City Life – “Oftentimes, we find ourselves living for others, yet that’s not always a bad thing; it means that we have a sense of social responsibility” 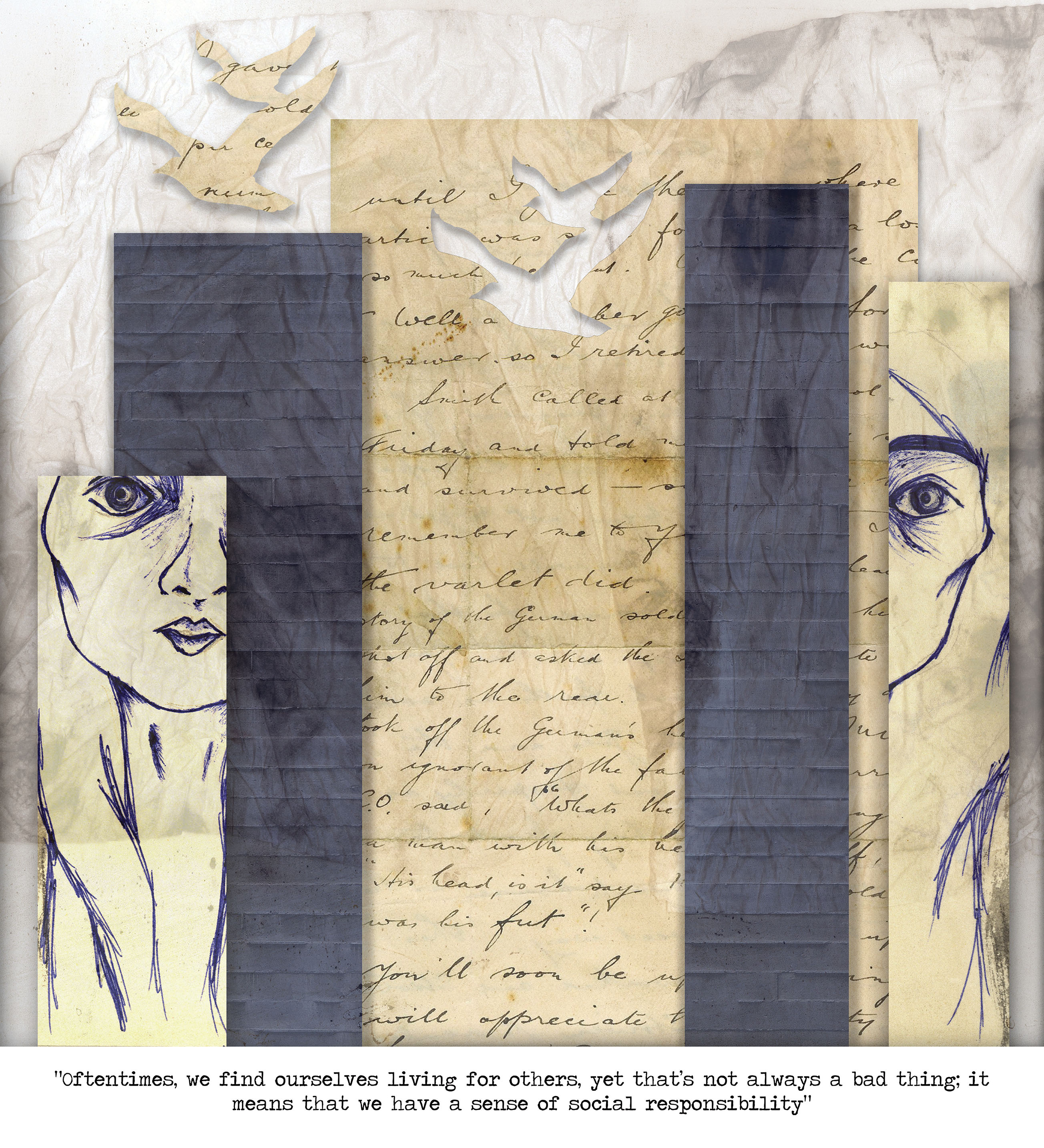 Oftentimes, I perceive the city life to be rigid – full of rules, expectations and routines. As much as I see myself as a city girl, the city would appear to me to be quite dull even though it could be full of events and opportunities. Hence, I decided to go with a light yet dull composition. The bird represents the longing for freedom, but the fact that the girl is displayed as a building in the image, it appears as though she still really does belong in the city. For the texture, I smudged charcoal on tissue and wet it. Afterwards, I waited for it to dry so that it will form creases, which will form the background of the composition.

Confined – “Maybe we can learn to live with less fear and just embrace the struggle knowing that we’re doing what we are doing out of genuine intentions and passion.” 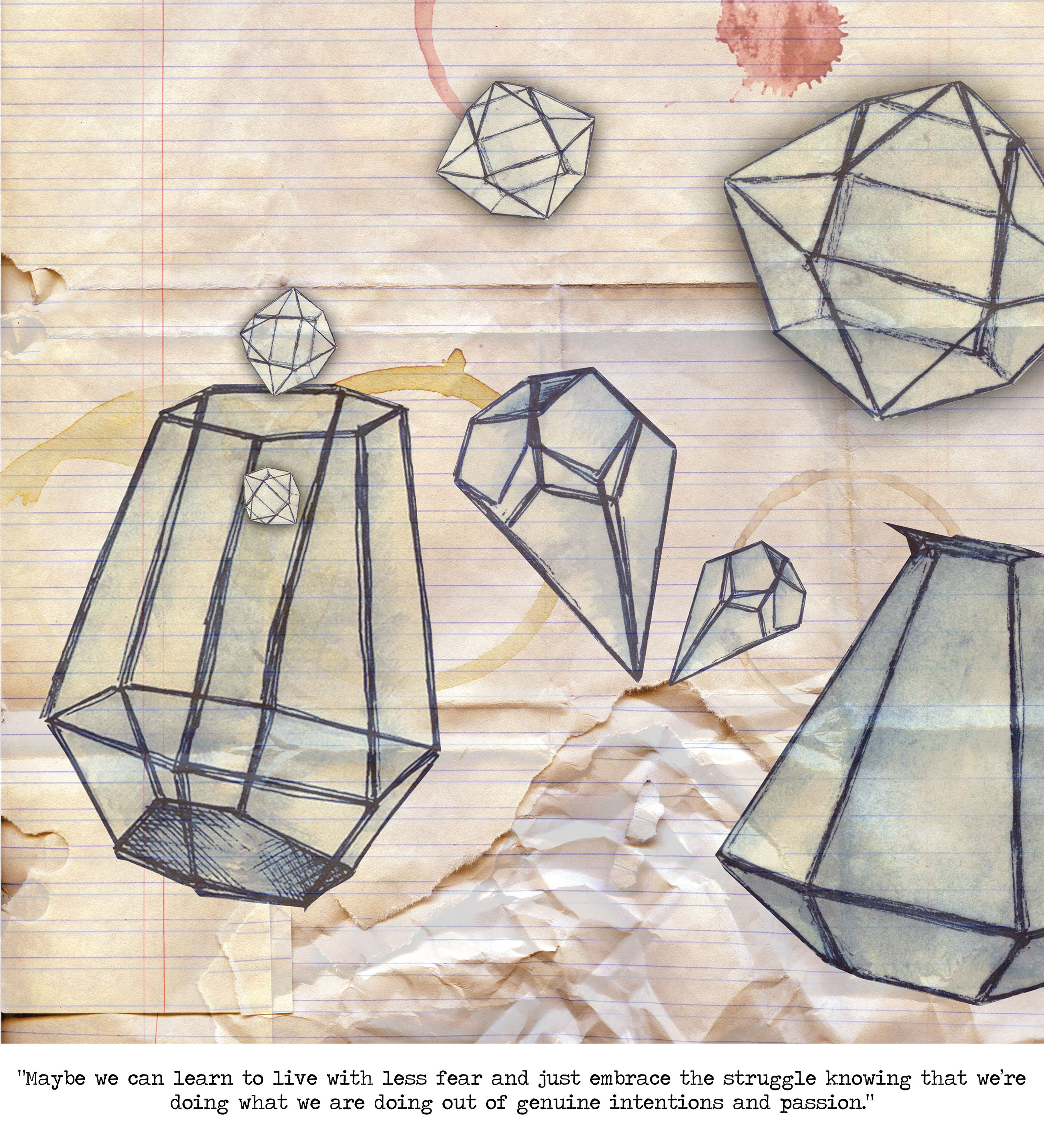 I drew glass geometric containers to highlight the idea of confinement and containment, though I want to place the containers in a playful manner to decrease the seriousness of the image, being that I still do prefer to settle in the city despite feeling restricted sometimes. The coffee marks tie closely with the crumpled paper background, which consists of much lines that attempt to act like a cage in the image.

Dejected – “You open your eyes after a blurry dream, and try your best to think positively to convince yourself that your day won’t be as horrible as you anticipate it to be.” 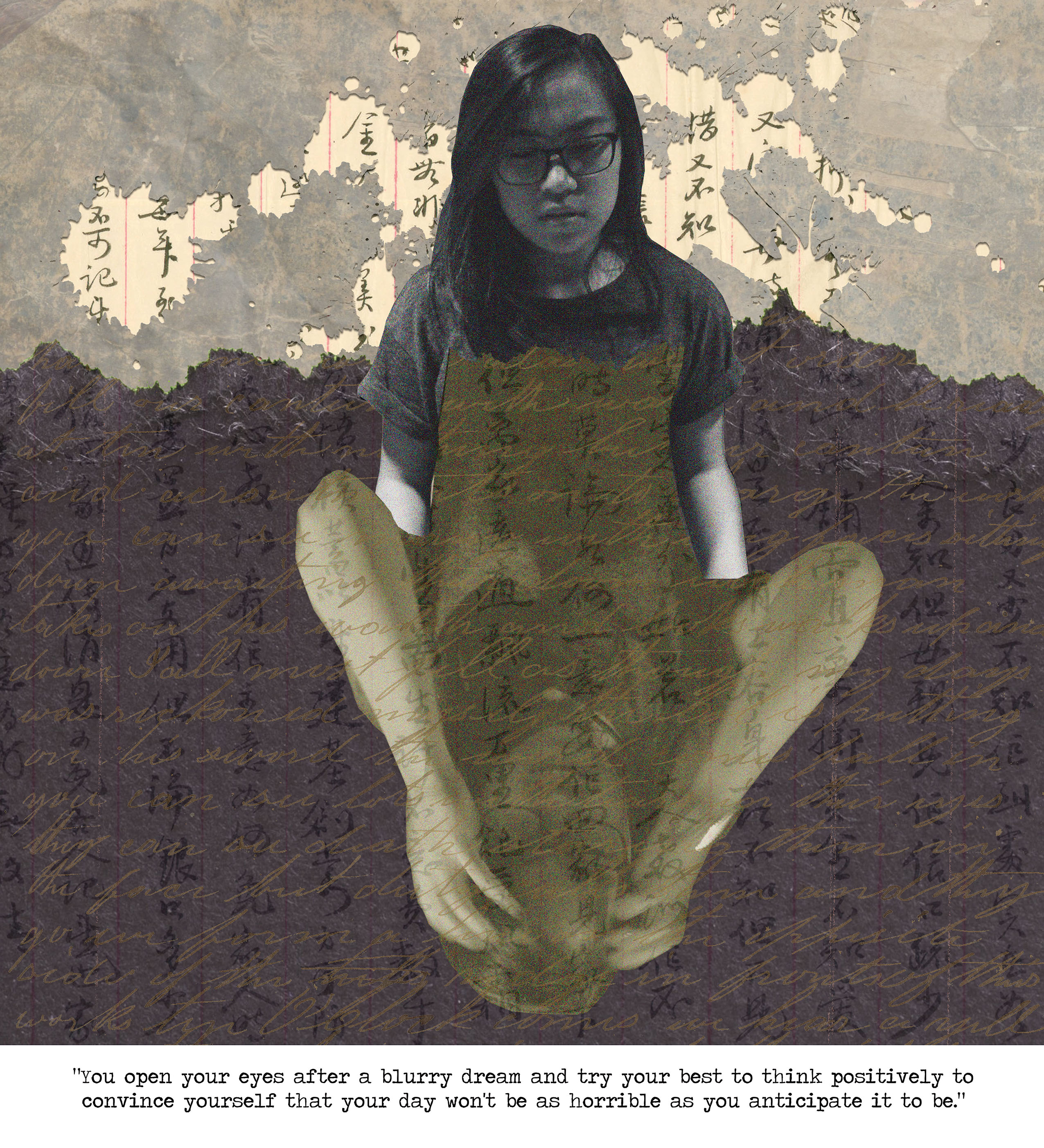 I started thinking of the composition with a torn piece of paper, as it represents how one would feel torn when dejected. I wanted to show a side that people might appear to be like when hurt, though the bottom half aims to show how they really feel like on the inside. Uncontrollably hurt. To personalise the composition, I juxtaposed Chinese and English words to somehow portray the root of most of my problems – misunderstood and confused because of my lack of cultural roots.

Gatherings – “Social responsibility expects you to stay awake while everybody else is, and remain in contact with those surrounding you.” 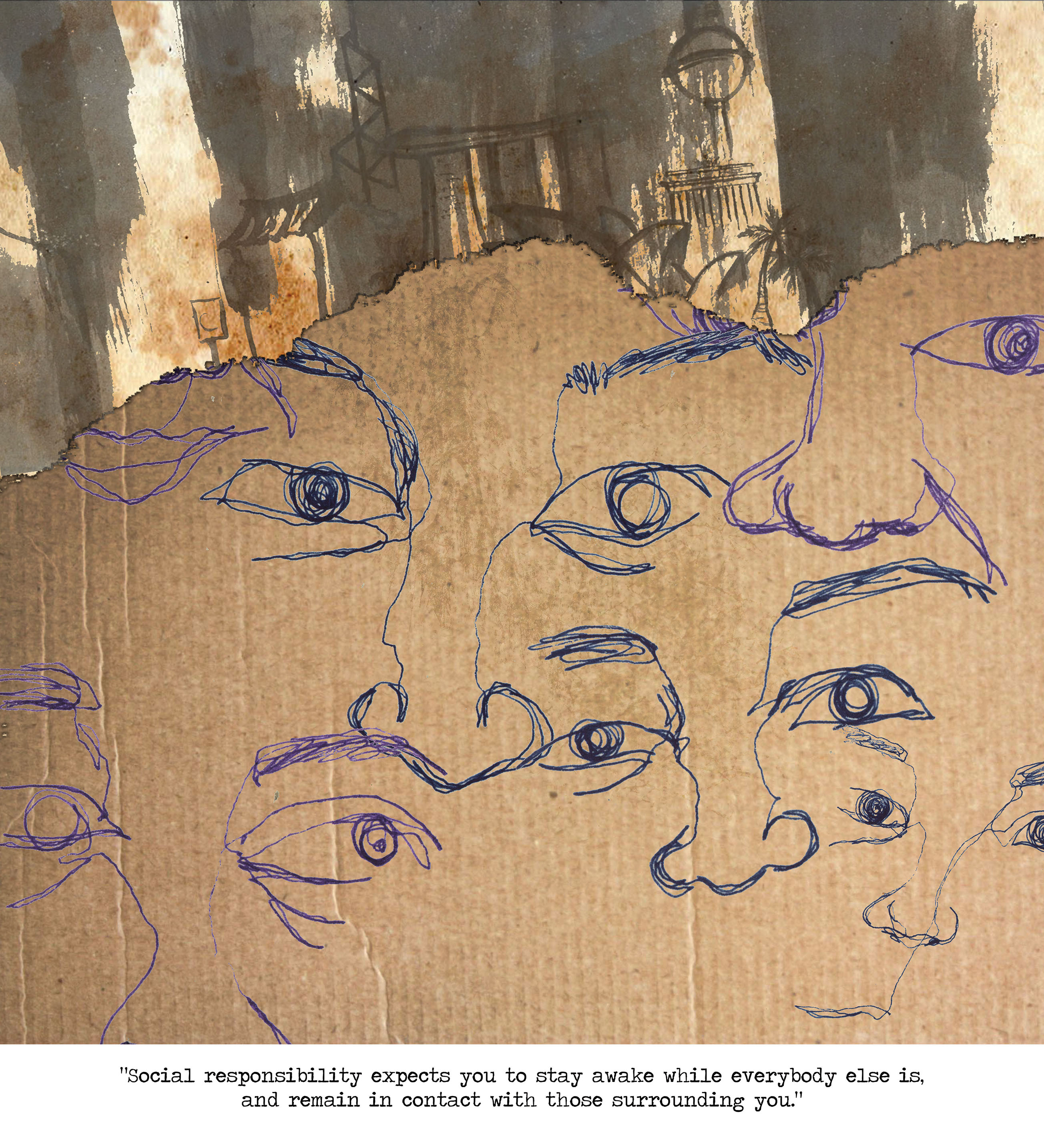 Oftentimes, gatherings seem fun to me, though I would still find myself uncomfortable at some point – mainly, perhaps, because of the fear of being judged or not really belonging. Once again, the root lies in my upbringing. On another note, gatherings are essential in a society and are inevitable. For this, I decided to draw blind contours of faces, and placed them in a congested composition to represent the idea of being watched and the lack of privacy.

Friendly – “But you know the world is already screwed up as it is. If you’re gonna be awake in it, might as well spread faith and kindness instead.” 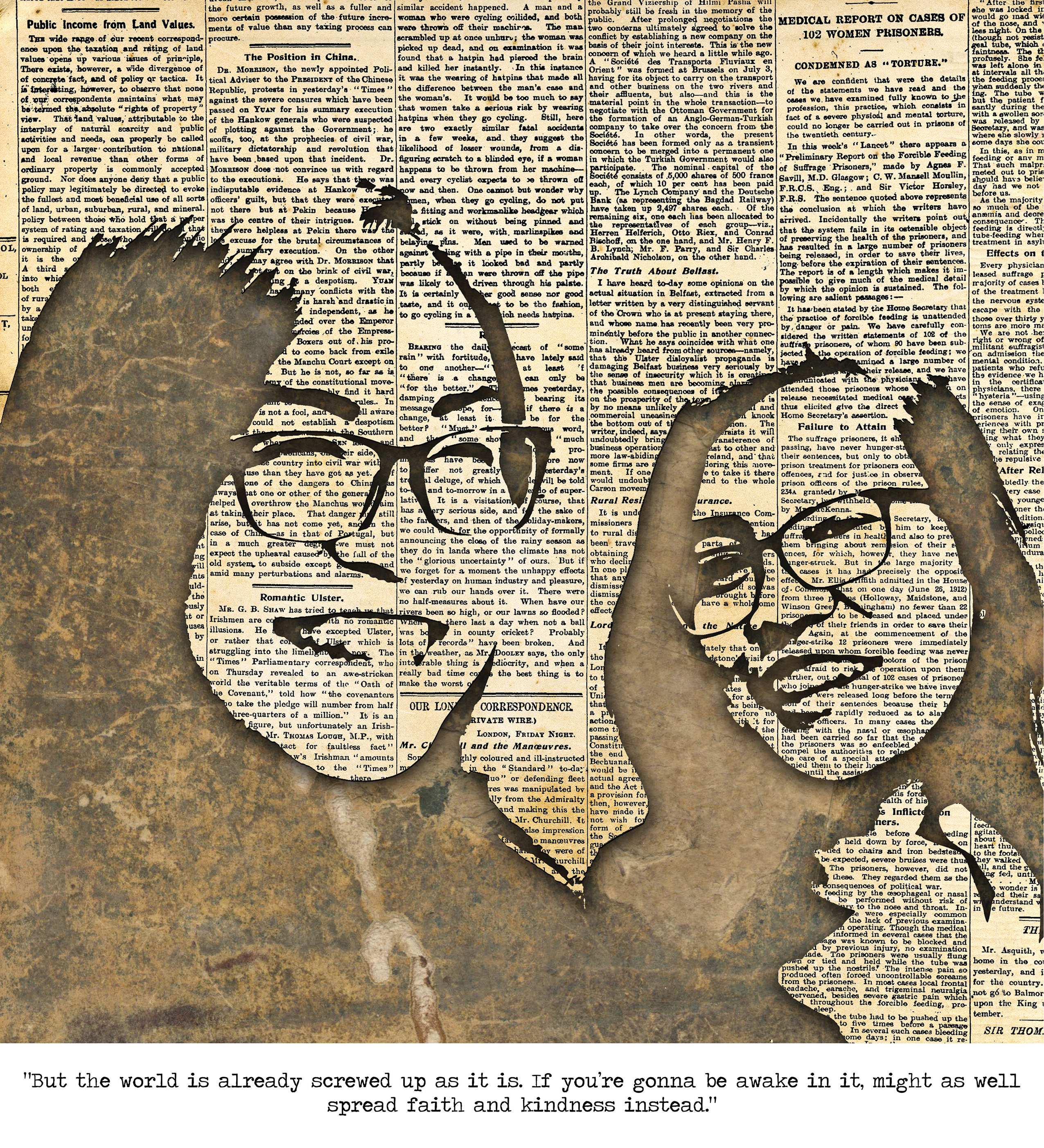 For this, I searched for an old newspaper which also contains horrible news. I juxtaposed faces of myself smiling and happy and included a grunge surface as a background. The grunge and stained textures aim to contrast the happiness that my photographs would bring, revealing that it may still be difficult to remain friendly and optimistic because of how one feels and the hurt that the world brings but one must try.

Insecure – “You don’t always have it together. Sometimes your confidence extinguishes, and you find yourself lost and scared. No matter how hard you try to be optimistic.” 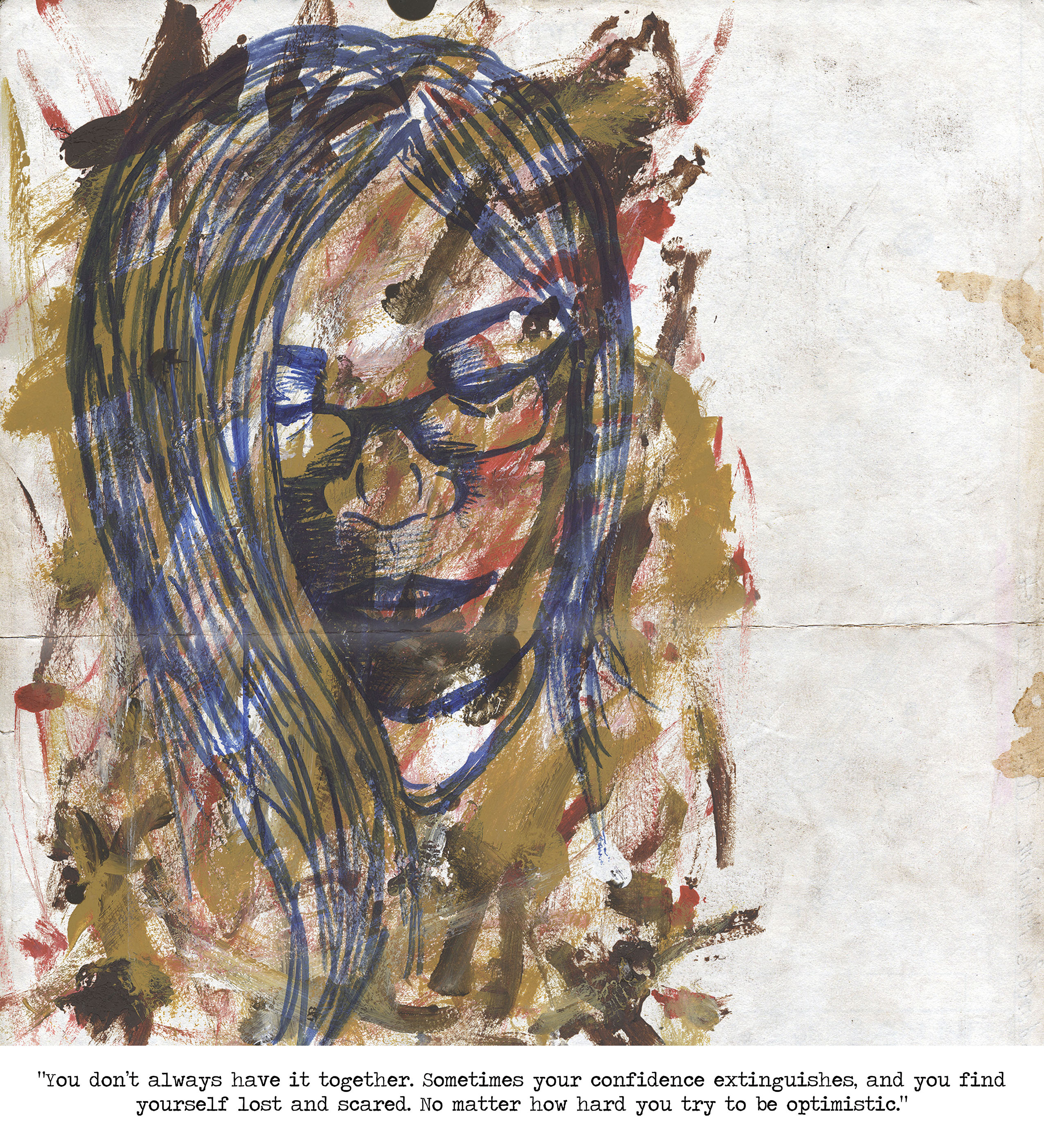 I painted different strokes in various colours of the range of red to brown and drew a sad portrait above. I added a layer of folded paper and a concrete texture so that the image would better fit the rest of the images in this project.

Nature – “Stop. And listen to the sound of the waves. Watch how it makes contact with the earth. Observe how the tree joyfully dances with the wind.” 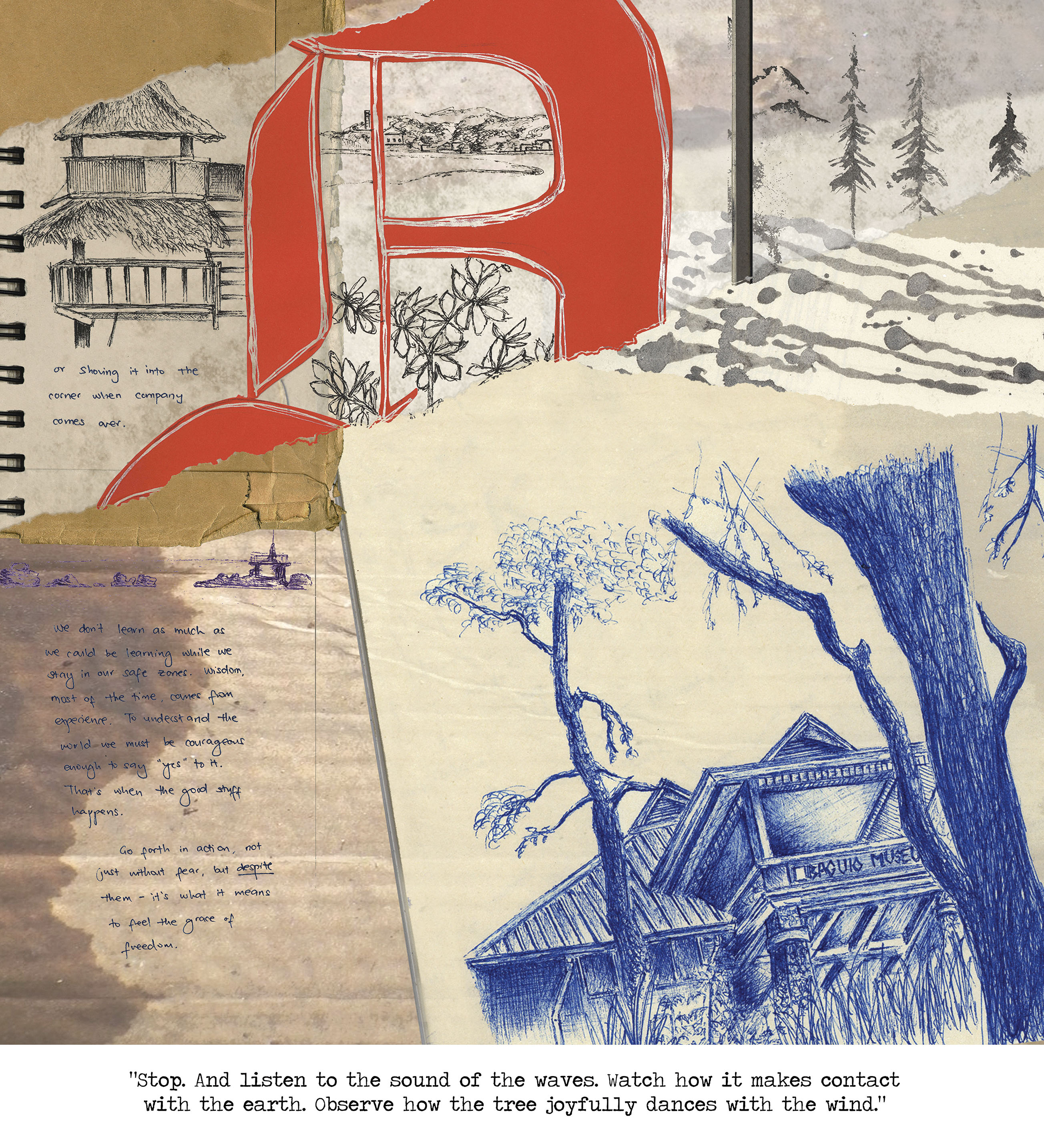 I attempted to try the collage/scrapbook layout here by placing different layers from my journal and textures. I scanned envelopes and cardboard to add texture into the composition. With this, I wanted to show how I would try to stop and observe the nature in my surroundings to gain inspiration – recording these observations to remind my future self when faced with stress.

Hope – “Perhaps you can find inspiration in the idea that your world isn’t confined to the worries of your life. The world is huge. And if you walk around it perhaps you’d find hope.” 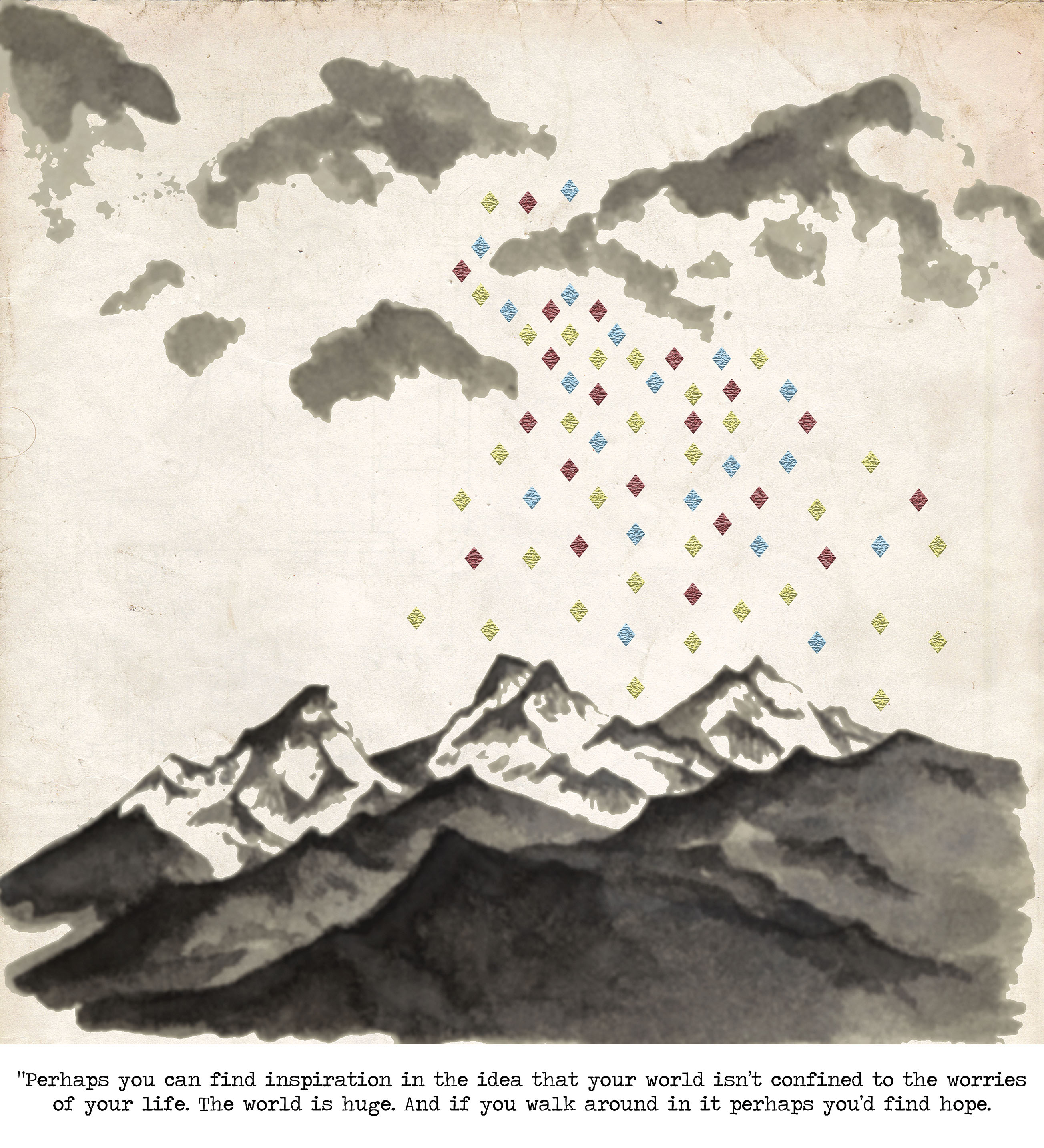 I took my painting of the mountains but made it look more wet, as though to give life in my Chinese ink painting. I then added droplets of diamonds that are of the primary colours though in a different tint. The unrealistic quality of such composition reveals the supernatural and oftentimes unexplainable feeling of finding hope. I chose the mountaintop as the feeling of being hopeful makes one feel courageous and capable of anything. 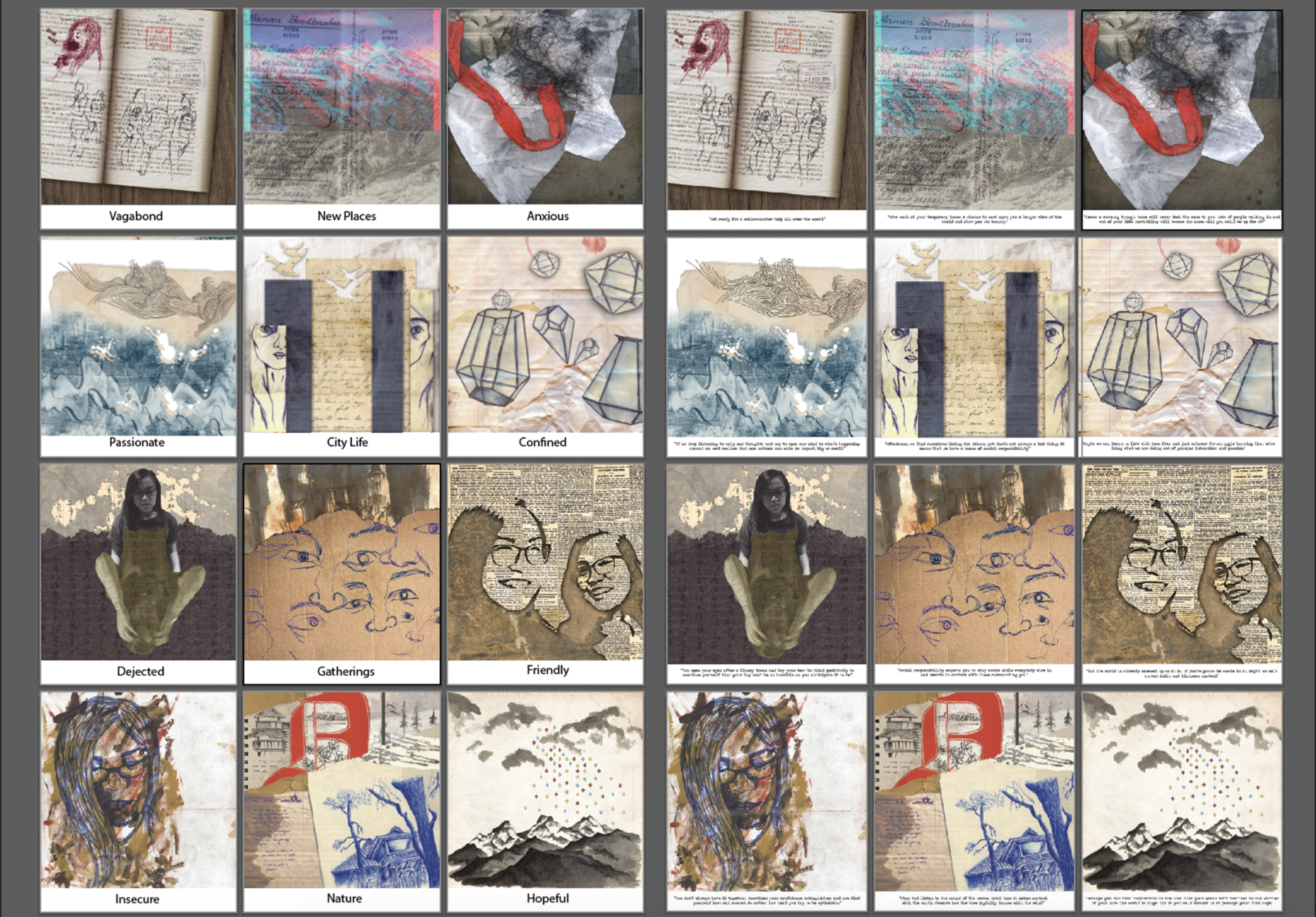