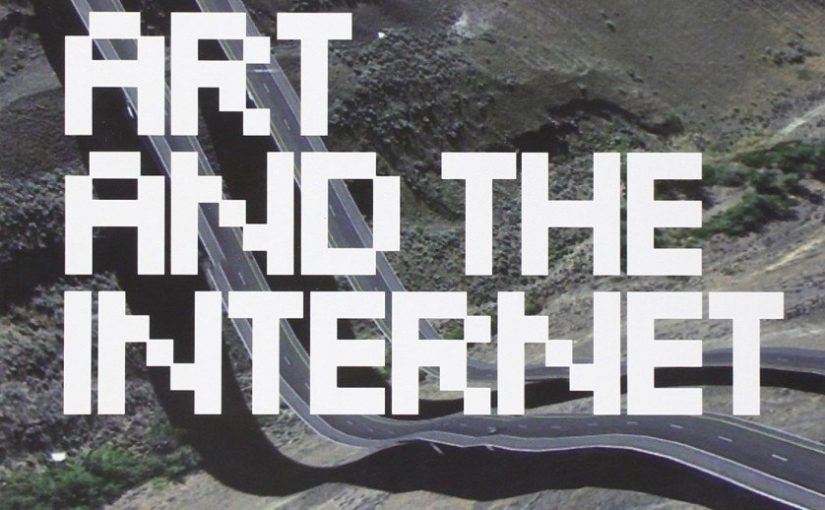 These publications share a common theme of viewing the Internet Art phenomenon at an appropriate distance without questioning the existence of it as one of the major art forms in the current century. As previously mentioned, the Internet has an omnipresence in our lives, the awareness of it has such great power need not be explained. The present and future of Internet Art through the contextualisation of contemporary culture, fine arts, socio and political situation creates new literary and visual achievements.

One of the things is that the art revolving around the Internet usually quite quickly becomes “outdated”. Considering how rapidly the Internet itself is evolving via updated software, shortened visual codes together with our high volume usage of it, how the society and the political context in which it is placed evolve. Thus our perspective towards the internet is changing. Therefore, this printed publication dealing with the issue of “Art and the Internet” may be very quickly transformed into archaic uselessness full of dead links. However, reviewing this publication at a distance proves to be useful in getting deep insights.

From the early 1990s, the Internet has had multiple roles in art, not least in defining several new genres of practitioners, from early networked art to new forms of interactive and participatory works, but also because it is the great aggregator of all art, past and present. Art and the Internet examines the legacy of the Internet on art, and, importantly, illuminates how artists and institutions are using it and why.

One of the texts which struck me was how the Internet has infinite boundaries we could explore to create art. The publication complemented with historical insights and giving emphasis on internet art and gallery systems. The art discourse within Internet Art would be useful in my current group project of a 360-degree website with some sort of gallery system which we hope it’ll work out and make a small impact or impression on the viewers. 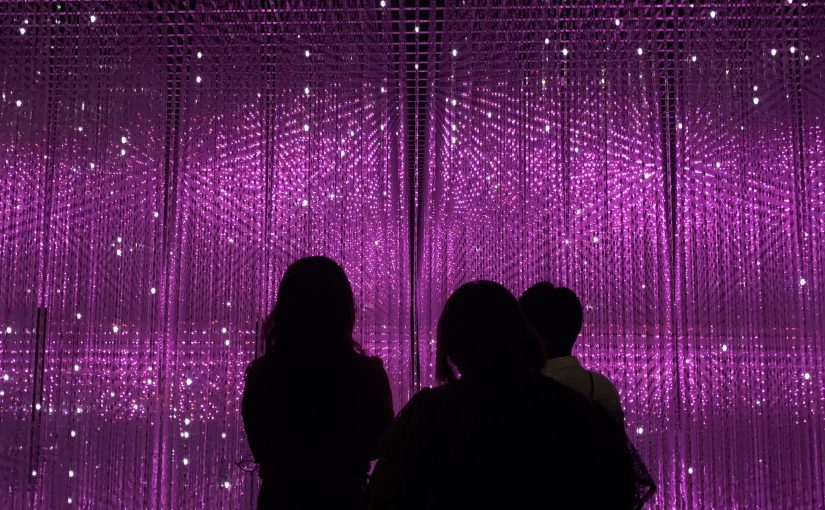 On 18 September we went to the ArtScience Museum Future World: Where Art Meet Science. Going back to one of my sources of inspiration for interactive art. You can read more about my initial impressions here. Visiting this amazing place for the fourth time!!

The experience of exploring art, science and connections between them which are inextricably bound is expressed in the interactive artworks by teamLab. teamLab is a group of ultra-technologists known for its innovative use of digital technology as a medium for art. They are made up many talented and creative group of artists, engineers, animators and architects. They are constantly breaking new grounds in artistic expression, creating worlds of magic and metaphor.

This field trip gave me an invitation to have fun, play, and to explore, but also to reflect on my own position to the relative world, other people and the universe as I mentioned in my previous reflection. It is a place where art, science and technology meet; a realisation of Leonardo famous maxim, “everything connects”.

The one that still inspires me would be the Story of the Time When Gods were Everywhere. 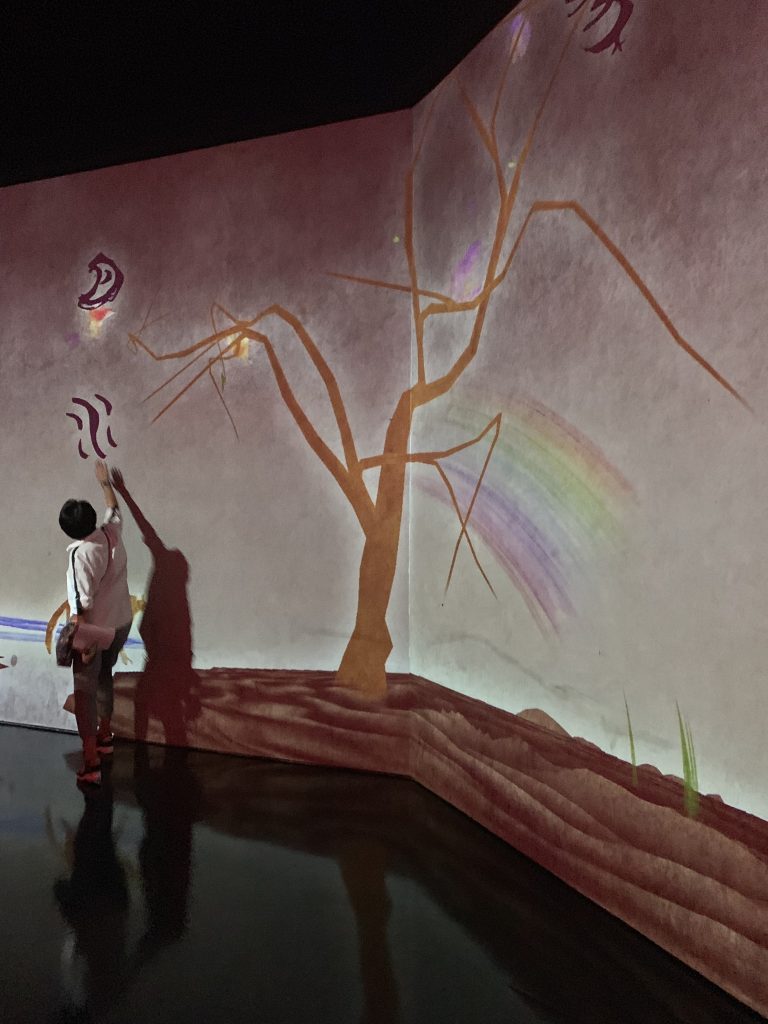 In this interactive, digitally projected world, visitors can create their own world by touching on the hieroglyphics characters, which then transform into natural elements such as wind, rain, trees and mountains. Hence, acting like “gods”. When one touches a character, the story begins to unfold. The elements of nature that are born from the characters influence each other. For instance, if you touch “earth” and “rain” at the same time, a grass grove would appear. If it snows, the earth would freeze.

I find that this concept of using hieroglyphics and understanding of causal relationships between different elements very intriguing. This artwork also requires collaborative creation which in my opinion very significant in creating an interactive installation. It also educates us about ancient Chinese characters which I find close ties to my roots. Hoping to visit this place again!

Closing off the visit with some selfies!

When I first entered the exhibition space, you could see people buzzing around in tables and performers were setting up their electronic equipment. There were projectors, various controllers and random screen recordings were played. We were encouraged to sit around freely from the tables to the stairs. 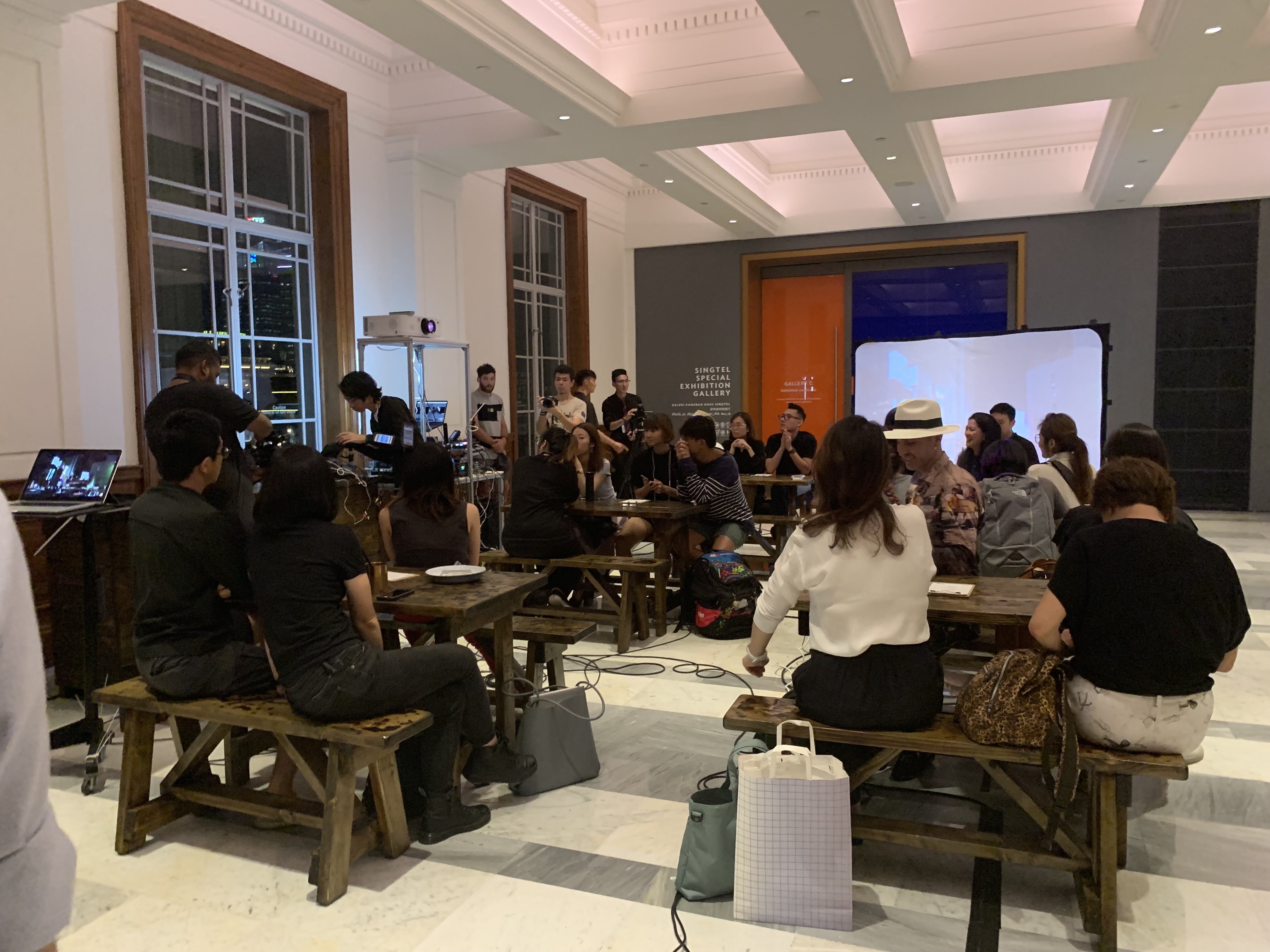 When I first sat with the audience, I did not realise that the performance had started. The projected videos on the three different scenes were actually live feeds from Japan, some motto from NAG and real-time video of the audience. it seems like a mish-mash of montage videos compile together. While all these visual footages were playing, there was also a distinctive white noise heard, it is sometimes manipulated by the artist by twisting knobs or controlling it via his computer.

After the show had concluded with a camera feed of a group crossing Japan’s Shibuya crossing which I have known much later, the crowd slowly dispersed after welcoming applause. With a casual conversation with one of the performers, I learnt that they were trying to covert images to sound. They were having a live feed with another group of performers in Japan and it was a response to reinterpret the chaos of mundane life back in the past of Korea.

The latter part of capturing Lee’s work is still a part I cannot quite grasp the idea of with the performance. I think if they performed in a different setting it could still imply the same theme and aims they wanted more effectively. 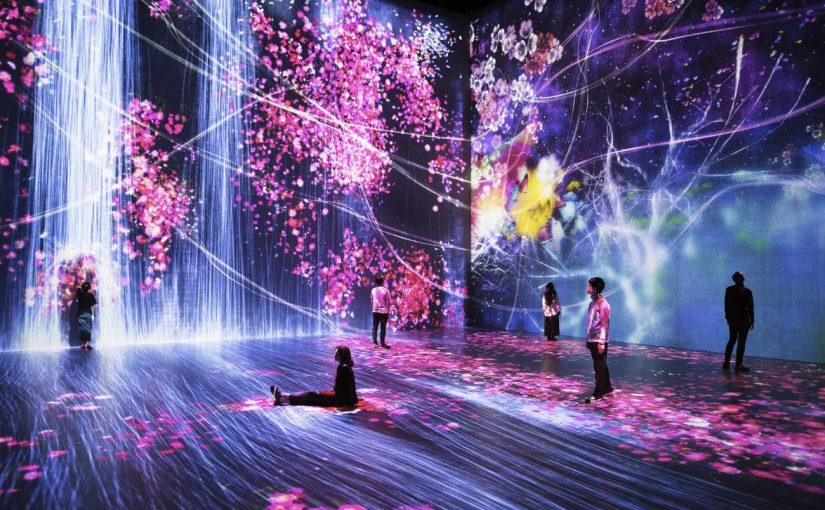 I remembered my very first trip to the Art Science Museum, Future World: Where Art Meet Science last year. I was awestruck. 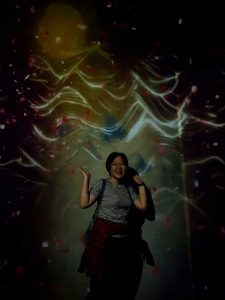 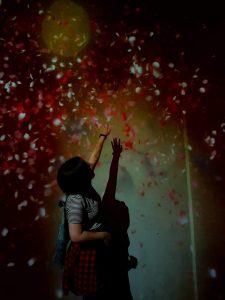 This exhibition was created in collaboration with teamLab, a renowned interdisciplinary art collective.

Flowers and People, Cannot be Controlled but Live Together – Transcending Boundaries, A Whole Year per Hour

This artwork is always changing. A whole year of seasonal flowers from cherry blossoms to winter flowers bloom, wither and scatter all around the interactive space within a period of an hour. When I stood in the space, self-absorbed in the environment felt like time stood still for myself, whereas the “nature” around me appears and disappears. It may perhaps be holding a sign of the nature’s ephemeral quality.

An important thing to note, this particular interactive art was not pre-recorded nor was on an animated loop. It uses a programme which monitors the interaction between the viewer and the installation and hence produces a result. In this instance, if I stood still, flowers around me would bloom, whereas if I had walked around and touch the flowers, they would scatter and disappear. Thus showing the fragility of nature. Hence the experience for each and every viewer is unique and could not be replicated. The underlying message mayhaps is the cycle of life and death (born, grow, bloom, scatter, wilt) where the experience of one human is not the same as another…

“I hope people will keep coming back because the experience will be different every time.” quote by teamLab’s founder Toshiyuki Inoko

teamLab’s concept and theme were strongly based on the aim of transcending /removing boundaries of art. As stated from their website “In the mind, there are no boundaries between ideas and concepts, they are inherently ambiguous and influence and interact with each other.”

With a digital platform in this millenial generation, art is able to transcend physical and conceptual boundaries. Digital technology allows interactive art to be created and break free from the static frame and go beyond the boundaries. Elements from one work can fluidly interact with and influence elements of the other works exhibited in the same space. In this way, the boundaries between art pieces dissolve.

Putting these underlying motivation and inspiration it pushes me to think deeper what interactive art can do and hence I wish to learn more about it through this course.