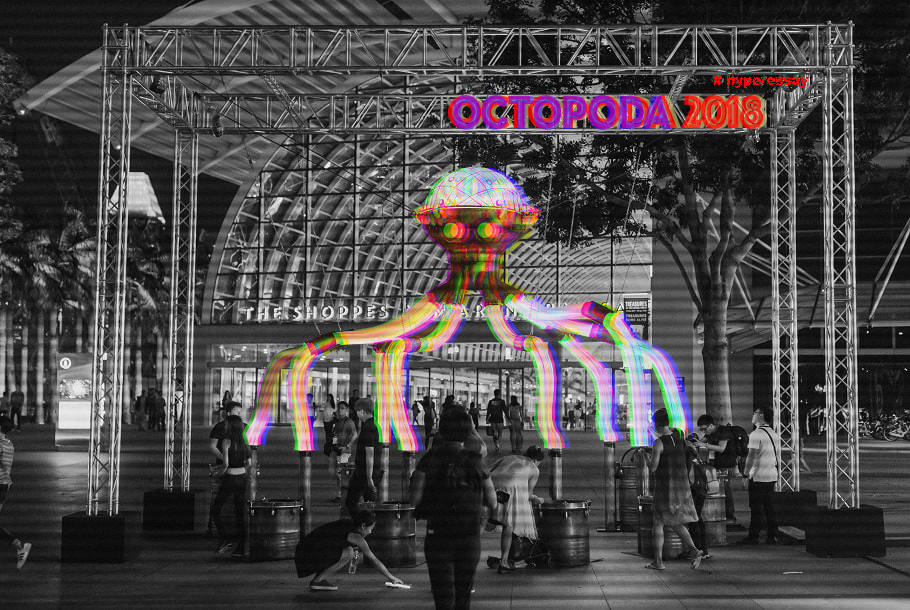 This prominent steampunk octopus-shaped installation was designed by Amigo & amigo as a kickoff to iLight Marina Bay Sands, 2018. Amigo & amigo is a Sydney-based artist studio with Industrial Design background. A team of artists, together with co-founder Simone Chua and Renzo B. Larriviere, are passionate about lighting and experimental forms. The body of work showcases their ability to use primarily LED, and other materials to transform spaces and engage the public. Their projects are predominantly large-scale and technical. Their works are wittily playful, with the intention to transform environments into memorable experiences by inviting audiences to interact with the work. Octopoda is an epitome of their team’s vision and effort to inculcate the beauty of modern art. For which I believe includes three characteristics; first, catering user experience; second, triggering behavioural response via interaction, and lastly, an intended outcome backed by underlying philosophy.

When its tentacle drums are being played, Octopoda will dazzle audiences with its mechanical moves and rhythmic light display. The interactivity seeks to engage audience’s senses. Firstly, the sense of touch, audience can hit on any of the eight drums. They hear the rhythms of their own beat, as well as those from other drums. Then, observe Octopada dancing in the colourful light it emits. The process wasn’t just enjoyable for the participants, it was also captivating for other spectators.

The fun element had fascinated many visitors, especially family with kids. I was reminded that during one of the class discussion, someone mentioned that creativity is constantly asking oneself, “how will a child respond?” Octapoda got me thinking, “why not be the child yourself.” To embrace the freedom of creation; be playful, be happy, just like what Octopoda has provided for its audience. Adult and kids alike. Octopoda wasn’t meant to be literal. To the contrary, it manipulates on exaggeration (huge pair of eyes and over-simplified legs) and surrealism from the body design to the kind of effect it produces. Even though this creature does not appear to be realistic, the light-hearted ambience it produced was definitely engaging.

Art has no meaning without an observer. As installations strive to engage its audience, we are no long a mere observer, we participate, and in Octopoda’s case, exert direct impact on the outcome. A more complex level of communication was being established via the process as information became multi-directional, and less predictable. Not to mention that our inputs were in turn shaped by myriads of factor, for example; memories and personality.

Indeterminacy manifest itself into Octopoda due to the nature of interactive mediums. Where input will be at random, and depends entirely on the audience. “Chance” was used in Octopada as a creative component to avoid stagnant, habitual creation. Physically, Octopoda is no doubt an enticing piece of art on its own, standing tall and bright, but indeterminacy has brought about a sense of beauty in the chaos. “What will happen if i…” was perhaps the primary drive that had prompted audience to try. The rhythm and changing lights were monotonous at times, and went completely tumultuous the next moment, arousing curiosity and awakening the playful child in us. Despite the output being disorganised most of the time, smooth running of the installation was govern by a stabilising control that was pre-determined by the team.

What differentiates Octopoda from other installations which interacts with a single audience at one point of time is the degree of “disorder” we called entropy. Entropy multiplies as eight input source channels “disorder” into the output. Input occur, when an audience decides to come forward to play the drum and disseminate the information to Octopoda. Or simultaneously, when more people decides to join in the fun. Note that interaction is no longer limited to audiences and Octopoda, but also within audiences. Human interaction is another indeterminate factor to the output. For example, seeing someone play might encourage more people to join, when all the eight tentacles were occupied, Octopoda might lose some input when people casually walk away. Another indeterminate factor occur when the each of the “tentacles” interfere with one another in terms of how the beat is being played. Participants can choose to collaborate, or insist to have it their way. The interesting thing is, you can never determine what is going to happen next. Numerous combination of input results in a variety of outcome.  Minimising the chance of repeat.

Octopoda highlights an alternative point of view to what music is. Creating music used to be the privilege of the elites, whom has developed excelling musical sensitivity to an instrument and have the scores at their fingertips. Common men were given the chance to participate and reap the joy of creating music just as much when they engage with Octopoda. With the sole purpose to create a delightful experience for its audience, Octopoda seem rather precious. In this day and age where citizens are overwhelmed by the fast-paced lifestyle and burdensome societal issues, Singaporeans definitely need more of such installations to relax a little. To play.

Art is no longer the self-contained entity, says Nam June Paik. Indeed, modern art has became less literal, and no longer confined within the tangible material used. Like Octopoda, the three characteristics of modern installation were observed in many. As it is a fairly new concept, I look forward to discover the endless possibilities of this prevalence.