For our first project in Foundation 4D, we were given three tasks as follows: 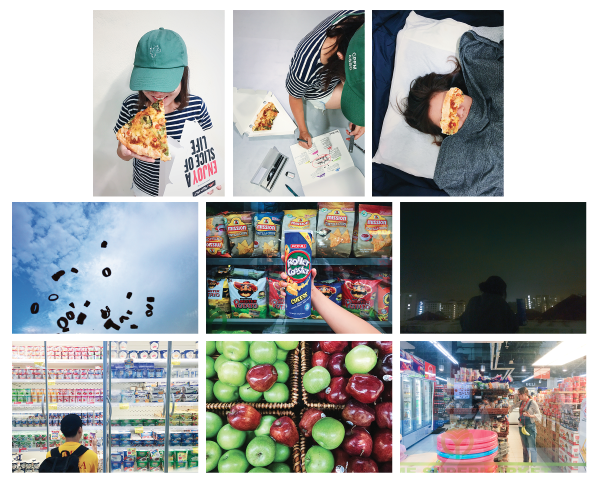 One constant factor ran throughout all three tasks, mainly that the pictures had to portray the story of me, and the thing and place of significance to me. So I figured, what kind of visual narrative about me would it be, if it didn’t revolve around the one thing that brings me the most joy in this world – food. With the theme decided, it was time to conceptualise ideas for each of the tasks. 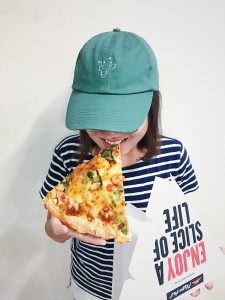 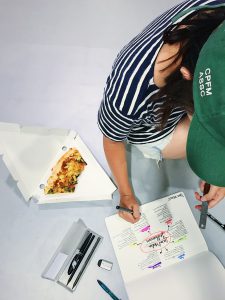 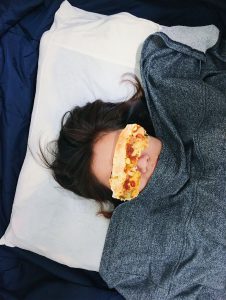 As seen from the above photos, the running theme for this task was pizza. The concept here was to show the three biggest pizzas of my life as of now, in order of priorities and how I essentially “Enjoy (my slices) of life”. If you look carefully, you’ll also notice that the slice of pizza gets smaller with each photo. Reason being, the slice serves as a Pizza Meter of sorts.

For the first photo, I am eating a full slice of pizza while smiling. While Shah did point out in his critique of my work that no true pizza lover would devour a pizza like that, I needed to make sure the full pizza could be seen in the photo, which explains the awkward angle the pizza was held at and also why no huge bites could be taken, as tempting as that was. The full slice signifies food being the top priority in my life, being something I love and enjoy at any time and any place.

In the second photo, I can be seen doing work with the pizza half eaten beside me. The lack of contact between the pizza and I is to signify that while work is a priority to me, it is still unlike my top and third priority(sleep) in the sense that it’s not something that is quite as close to my heart but more of a necessary priority.

As for the final photo of Task One, the pizza is at its smallest yet, having been bitten into the shape of an eye mask. The full contact of the pizza on my face is to signify that while sleep is the last amongst the three of my priorities, it is far from the least. My love for food and sleep – and my work in some sense – are aspects of me that largely constitutes my identity and hence I have chosen these representations to form the slices that make up my life and me as a person.

Another thing to note about all three photos would be that a part of my face is hidden in all three photos. This is because I’ve always been someone who is camera shy. This was something that was more notable in my childhood, however while I have progressively gotten more comfortable in front of the camera in recent years, I am still not 100% at ease, which is why I also felt the need to have that represented in my photos by hiding parts of my face.

Lastly, I realised that the whole concept of the Pizza Meter may have been more evident if I had incorporated a whole pizza instead for my photos. However, due to budget constraints, I was unable to do so and hopefully, that doesn’t take away much from the whole concept. 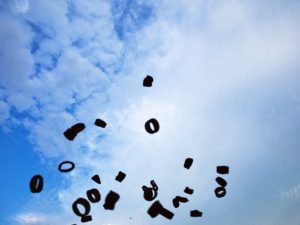 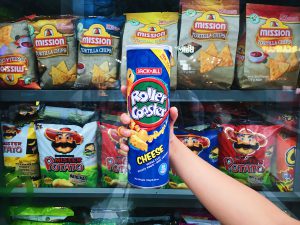 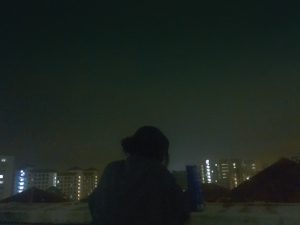 For Task Two, I wanted to further illustrate my relationship with food just to emphasise more on exactly what kind of role it plays in my life. To me, it isn’t simply a daily necessity, meant for survival. Through heartbreaks, joyous occasions or hell weeks, food is a constant source that provides a great amount of comfort. Hence, in Task Two, I took inspiration from Cindy Sherman in the sense that I wanted it to be more storytelling and roleplay where I took the role of the bride in a fantasy world where food comes to life. I present to you, my marriage to food – or in this context, a can of Rollercoasters.

First, we see a bright blue sky with some clouds and the silhouette of multiple rings in the foreground of the photo. Overall, with the clear skies, it gives off the feeling of a nice, happy day. I wanted this photo to be reminiscent of wedding days where confetti is thrown into the air as the bride and groom walks down the aisle surrounded by their loved ones but in this case, what’s thrown into the air is instead my object of choice, Rollercoaster Potato Rings. I’d also like to add that cleaning up the mess that followed was not quite as nice.

Next, against a backdrop of a shelf of other snacks, we see my hand holding up the can of Rollercoasters in the middle of the photo. On closer inspection, there is also a Potato Ring around my ring finger. The meaning behind this photo is to show that out of all the other snacks, this particular one is the one I chose and that is a fact that I would proudly flaunt in front of bystanders (or in this case, Mister Potato). I may also have contemplated making use of the reflections in the store’s glass walls to include more than just my hand in the photo as inspired by Lee Friedlander, however, I felt that there was already a lot of things going on in the photo and admittedly, I’m also not that good a photographer.

Last but not least, the third photo of this series features my can of Rollercoasters and I once again, seemingly enjoying the company of each other in the silence of the night. I wanted to give this photo a sort of “Me and You Against the World” kind of feel, and envisioned it to be a low angle shot of my object and I against a towering skyline. However, due to location constraints, that was not possible. Instead, I opted for a more toned down neutral shot just to give viewers more of a cosy vibe between my object and myself in the night. While I was aiming for a dark scene so as to provide a sort of barrier between us and the audience, to signify that I don’t like to share my food, the shot was still a lot darker than I hoped and our silhouettes weren’t too clear. Hopefully, next time this is something I’ll be able to improve on when I get a better understanding of lighting conditions and camera operations. 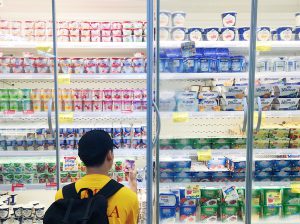 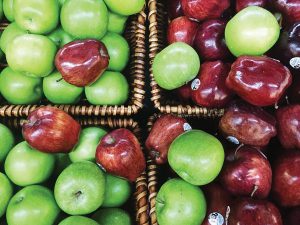 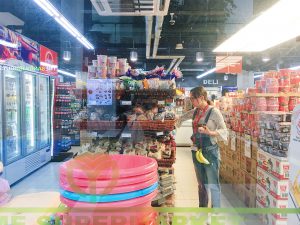 In this final task, I wanted to conclude the project with one of my favourite places in the world – a supermarket. Not only is it the bearer of many of my favourite snacks and energy sources, I also have countless fond memories of time spent grocery shopping with my family during the weekends when everyone’s off from work or school duties. Therefore, for Task Three, I wanted to present the supermarket to my audience in the way I see it – an inviting place filled with delights. That meant bright, saturated colours and higher exposure – to give off a more fantastical vibe, like magic is in the air – and leading lines such as in the last photo where the lights direct your line of sight to the stocked aisles.  Also, I arranged my photos in this particular way where the shot from outside the store is last instead of first so as to show the viewers that, even when I’ve left the store, I am still looking back in, much like I’m pining for it after having just left.

One photographer that I found who, in my opinion, was able to capture a supermarket in all its essence, would be Andreas Gursky. Gursky specialises in large scale panoramic colour prints of elevated vantage points with frequent applications of symmetry. He also makes use of a lot of lines in his photos such as the horizontal and vertical lines of shelves or on buildings. I like how his photos are able to make his subjects look larger than life which bring about an ethereal quality to his photos

Being someone who doesn’t even know how to operate a DSLR and never had the eye to take good photos, I struggled quite a bit with this assignment. However, thankfully we had a very detailed brief as to what shots we needed, which really served as a form of guide for me. Coming up with the concepts was also another issue as I have difficulty thinking out of the box. However, when the ideas struck, it was fun to get into developing them. I’m also very thankful for my classmates who gave loads of help, from advising me on my shots to even just introducing me to good and cheap printers.

Feedback wise, mainly what I received concentrated on Task Two. Shot three could’ve been executed better so as to make the overall story clearer. Even dressing up my prop such as adding some wedding themed accessories would’ve helped to bring out the story a little more distinctly. Hopefully, I will be able to do better in the next project!