Rafael Lozano-Hemmer is an interactive installations artist who was born in Mexico City in 1967. His specialty is in creating art works which serve as a platform for public participation such as in his exhibition “Recorders” which featured various works which recorded the viewer’s fingerprints, voice, and heartbeat amongst other things which then contributed to forming the actual art work. Simply put, his works were entirely “crowd-sourced”. In this virtual age, Rafael Lozano-Hemmer sees technology as an unescapable part of our culture where phones and cameras are everywhere and it’s very easy for someone to spy on anybody, and hence, he aims to abuse its nature to instead create experiences for viewers to connect through the use of ambiguity to spark their curiosity in order to encourage participation.

“In Recorders artworks hear, see or feel the public; they exhibit awareness and record and replay memories entirely obtained during the show. These works emphasize that absence and presence are not opposites and that several realities co-exist at any given time.”

One particular art work in this exhibition is Please Empty Your Pockets, which consists of a conveyer belt with an X ray scanner that records and compiles everything that passes through it. 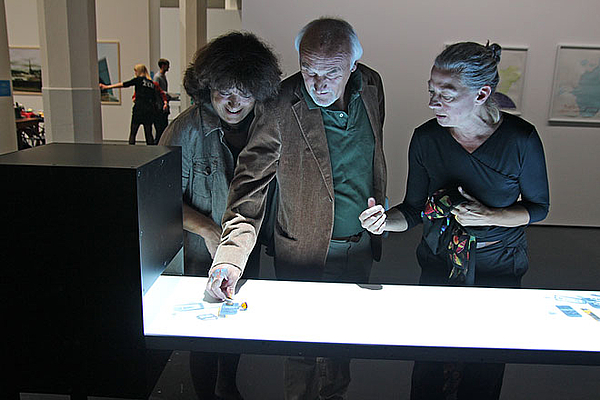 The scanned images then appear on the other end of the belt outside the scanner against a background of projected objects from previous participants. This piece remembers up to 600,000 object to be displayed with updated ones that are added to the installation and it aims to explore the lines of presence and absence and how they may coexist using this form of augmented reality as real objects are displayed with traces of past ones.

I chose this piece as I love the idea behind it where visitors have to empty their pockets in order to contribute to the art work as being a pretty private person myself, I wonder how other people would feel in regards to emptying their belongings to be displayed and exposed where countless other strangers would be able to see for quite awhile. And unsurprisingly, the work has definitely brought about certain prejudices due to its prying nature of mimicking surveillance technology which requires the viewer to expose their personal belongings. Yet, visitors still cannot help but contribute due to their own sense of curiosity and wonder which leads to their willing participation which I feel in most cases such as Yoko Ono’s Cut Piece, is really the entire idea behind interactive art and how you can achieve it.

Similar to many other interactive works such as Soundings by Robert Rasuchenberg, this resulting art work creates an entirely new role for the viewer as, rather than a passive viewer of the art work, they’re now in charge of how it looks and what it becomes. It also becomes indeterminable and unpredictable as the art work is no longer just any singular artist’s work and hence is entropic. The art work explores the connection between humans and technology by translating human activity into a digital language as without the human’s participation, the art work simply would not exist. Therefore, I feel that Rafael Lozano-Hemmer was able to encompass the whole idea of cybernetics through the interaction of the viewer and this art piece very clearly and well.

Hence, to conclude, I love that Rafael Lozano-Hemmer was able to take something as unassuming as an airport conveyer belt and stick to its traditional use but create something that resulted in a completely different meaning while keeping it interesting and fascinating enough that his audience would want to and be comfortable with taking part in it. I also feel that Rafael Lozano-Hemmer was able to achieve his own aims of connecting people and blending the idea of absence and presence through this particular art piece by creating a platform where real objects and projected images of them can coexist, while also having the DIWO element by placing the belongings of many strangers on one same art piece to form a seemingly cohesive collage of all their things. Through this use of interactivity, something completely new and original was able to emerge with every new visitor and participant and due to the fact that no two humans are ever completely the same, the result is then an unpredictable piece.