It is highly used by surrealists artists that use the technique to achieve different patterns solely due to the process of chance. It is first created by putting ink or paint on a surface such as paper, and then another paper is placed on top and pressed down with pressure to create intricate patterns. Originally it was to transfer a patter onto pottery or canvas. One might be familiar with one of its common uses is the Rorschach test in which ink blots are used in a psychological test to analyse a person’s emotions or characters. If you all are interested, you can take a test here! http://theinkblot.com

in a funny way, this method sort of coincides with the project of ‘my line is emo’

My artist reference is a very popular surreal artist called Max Ernst. He is best known to employ the decalcomania technique to this famous painting called Europe after the rain. It was an eerie reflection on World War II as the Nazis took over. He was terrified of the horror around and had been condemned in a prison camp. It was here that he started to conjure up this painting and completed it after he managed to escape. There is a stark contrast between the clear blue sky and the seemingly dark ground with bodies. Here is a helpful link for a video that I chanced upon that someone managed to figured out how Ernst did his texture for the trees in his paintings. So instead of plastic I played around with other materials in between paper to achieve different textures! Enjoy!

Other than using simple materials like plastic wrap or even thread to make interesting imprints I have also discovered this interesting video that led to the success of many of my decalcomania prints resulting in interesting prints simply just by adding white glue! Here are some of my works that I did successfully by pressing the glue paint solely on its own or placing a material on top of it and then taking it out to get interesting results. 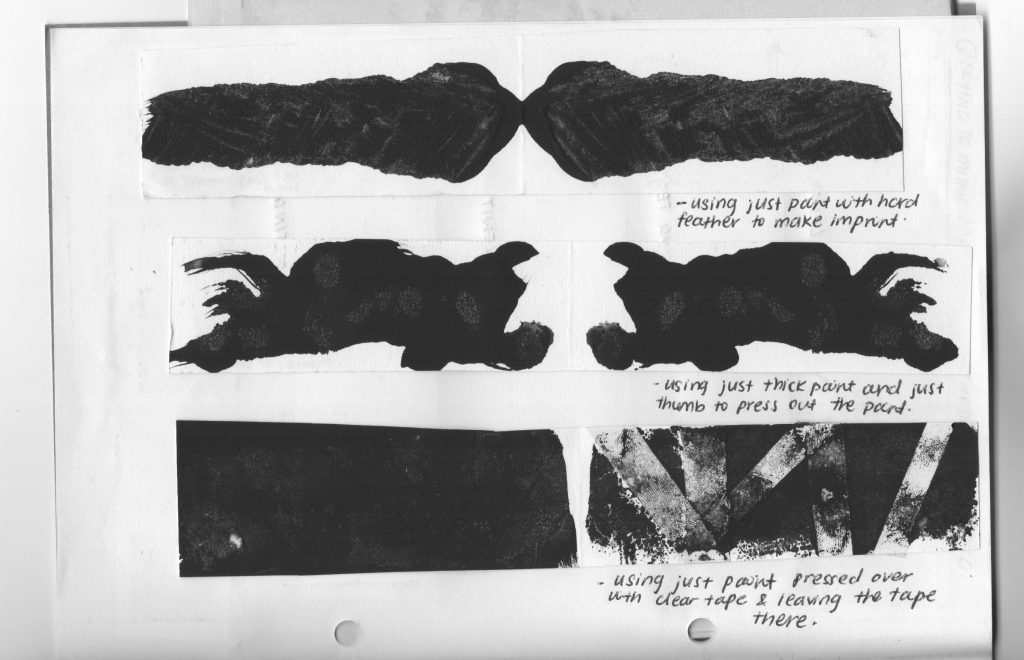 In decalcomania I learnt that one can also play and vary the amount of water added to the paint to make it more diluted allowing it to spread even more or just making it thick so it sticks more and upon removal will produce something.

On top of that, I discovered that decalcomania can also not only be done in just one fold or layer, but repeated! One can gradually add a little bit more water or paint depending purely on randomness and chance to what the result would be.

Thats the end of my wonderful discovery of decalcomania!

One thought on “Decalcomania and my artist reference, Max Ernst”