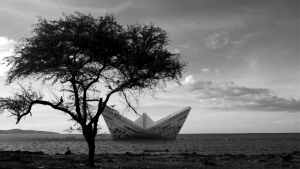 I mistakenly saw the last scene as the first scene hence my first impression has different interpretation that the others. The first scene was taken at night about people who were chopping trees in to create a way for cars to pass trough. The suspense made me think that they were trespassing secretively from Timor Leste to West Timor.
The next scene was about children playing in the field with a tree on the centre. Assuming this field was in west Timor, it shows how happiness can be found even in a rural less developing area without worrying about what’s happening outside. Later a train passed by but the children were not scared and played like they are used to it. Personally, it symbolises how the children in the less developing are at of the development in other places, but they are not fully involved in it.
Lastly, the scene of a huge paper boat moving from one side towards the other and a much smaller motor boat came to change the direction of the big paper boat. This shows me that people in developed are (representeds by motor boat), being more technologically savvy regardless of population size, are able to influence and even changing direction and vision of people in the less developing area (represented by paper boat), no matter how big it is.
To sum up, my first impression of the film was about how people from developed area have the ability to influence and change the way on life of people in the less developed area.
Secondary reading:
Yosep Anggi Noen is known for film that captures the story using details from daily life. Anggi sees film as a media to share his story. Since started, he didn’t consider film as a business and he also ignore the common Indonesian film industry popular approach to gain as many revenue as possible but rather to express himself in aesthetic way.
His movie’s detail is based on reality. He made common and trivial activity like eating instant noodle to be significant to show how people’s ignorance towards seemingly-unimportant things will actually brings out great consequences in the future. Triggered by pictures and texts, he uses a relatively longer duration to invite the viewers to reflect on routine they have always missed. He believed that showing the right juxtaposition for daily life will give deep meaning for audience to see that those trivial things differently.

Knowing that Yosep Anggi Noen has meaningful details and contemplative style, I interpret his “Genre Sub Genre” as a short film t about awareness towards nature exploitation in less developing area.

Scene one of trees and children on a field has extreme long shot. There were two types of children: those who climb and play with the tree and those who play with toys like ball. It shows that there are people who love interacting with nature and those who prefer man-made invention. Later,a train approaching shows modernisation around the area. The part where most of the children keep playing like nothing happen shows how they are aware of what’s going on outside their area but not really interested to know more. Scene 1 shows how a community in less developing area’s awareness of outside world is not necessarily make them interested to change and be more modern by themselves.

Scene 2 of paper boat glides by has an extreme long shot. Huge paper boat represents people in a community with less technological knowledge and have more traditional way of life. Paper boat made of receipt paper shows that this quality is commonly found in daily life.Relatively much smaller boat with motor represents people who are more knowledgeable (more content, not only paper) and more technologically savvy. The small boat ability to reverse the direction of the big paper boat symbolises that knowledge and technology are able to influence the way of life of even bigger community. So scene 2 shows influence of developed area on less developing area.

Scene 3 of a vehicle travelling along the dark road has first-person point of view and seems like it was taken using a handycam. The dark and shady atmosphere implied that the journey was secretive and maybe illegal, if it was legal why wouldn’t they do it on daytime? Shaky movement form the journey gives suspense and represents uncertainty.The curvy asphalt roads may represents that the way to the destination (maybe the undeveloped area) is not easy and direct. This scene shows how the approach taken to control nature in less developed areas may be not as legal and clear as it supposed to be. The loud honk from paper boat for me symbolizes the proverb of “empty vessels make the most noise” as they are louder but has less impact. Scene 3 shows how a developed community can influence a less developed one.

Scene 4 of chopping the falling trees for car to pass through has long shot.The fallen trees blocking the road shows how the nature is falling in condition. Chopping the trees for cars to pass through represents the killing of nature for the sake of mankind and modernisation, showing exploitation of nature. The local people helping it means that the people in the less developed area are helping the outsider on exploiting their own land.The part where a car pass through represents that the local allow outsiders to come in and maybe start modernisation in the area.

This scene concludes the film which shows how the local people in developing area are helping to facilitate modernisation even though it exploit their nature. To conclude, I feel that the video is to raise awareness regarding exploitation of natural resources in less developing area.

The biggest highlight to me was the surrealistic element- the paper-folded boat. It was just like any other man made boat- sailing from one end to the other. What stood out for that subject, was the size and the material of it. Bigger than the typical boat. It was made up of paper receipt with indonesian marks written on it. After observing it closely, the paper boat was actually a used receipt paper. I thought it was interesting using this as a surrealistic element. Perhaps there was some significant meaning behind using this receipt into an object like a boat.

Personally, in relation to the artwork, it is portraying how peaceful the land has become following chaos during the earlier years (colonial period). This is seen by how the camera captures the slow movements of natural landscapes of the sea and land, the tribes of people roaming around in an open grass area, and sirens of moving boats going back and forth. There seems to be no sign of chaos for the people and land there.

As Yosep being Indonesian himself, perhaps he is trying to appreciate the lands and the seas as what they are, simply a place for people to live and die, as part of nature. And not as lands to be conquered by political powers, which normally ends up in fights, wars and more chaos. By removing the element of chaos and disunity, which once happened on that land shown on screen, he’s likely trying to show the beauty of peace and harmony.

For me, the element that caught my eye in the beginning was definitely the stand alone tree. There was something dramatic and yet empty about it when the children were playing around it and the use of black and white definitely helped dramatize the whole setup. Also, I found the video rather unsettling as it switches between moods throughout the whole film. For example, when the train entered out of the blue while the children were playing in the distance. This definitely caught me by surprise because it was mostly silent with some subtle background sounds until the train entered. The transition between the 2nd video and 3rd video was also jarring. It suddenly switched from a static shot to the use of a handheld camera. It gave it a really creepy and horror mood, like something from the Blair Witch Project. This is further supported by the change in background music and it becomes really eerie.

Relating this piece back to the theme of the whole exhibition, “Spirit of Place”, which refers to the core of a place that gives it a distinctive sense of identity, Yosep Anggi Noen tries to do that with this experimental piece. East Timor, also known as Timor Leste, is considered a low-income economy and it could possibly be because they are being exploited. They are one of the largest importers in the world and despite having export, the amount of goods that are being imported into the country leaves them in huge debt. Hence, the paper boat in the film can be interpreted as representing East Timor, as they are not as developed, and that the ships that appear are the countries trading with them. Therefore, everytime East Timor tries to advance (like how the paper boat moves forward in the film), they end up being pushed back to where they started because of the huge debt they have. The location where the children were playing is also reflective of the simple lifestyle they lead in East Timor.

Through this experimental film, I think that Yosep is also subtlely raising awareness about the situation in East Timor/ Timor Leste, that even though Indonesia claims to have good relations with them and makes up about 50% of their trade, East Timor is definitely being exploited. And while the countries they trade with continue to advance, East Timor is left behind.