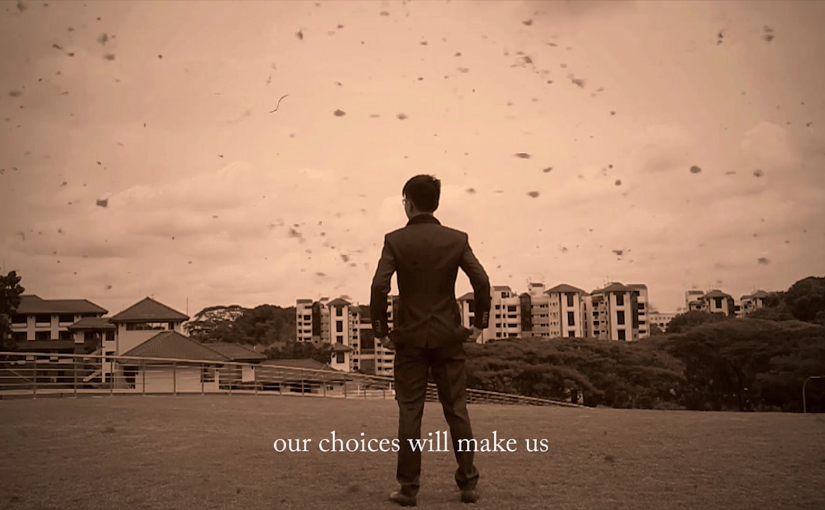 There exists a device that allows us to peer into other realities where different choices were made, resulting in very different people and personalities. This film is about a reality where King Lam grew tired of caring for others, perhaps through experience or upbringing. Over the years, King Lam had learnt that only weak people ask for kindness and the lazy make use of other people’s kindness. Being kind to others meant you were restricted in your actions because of society’s morals. It also meant that others would try to take advantage of you, which made you weaker compared to them. This film is a rejection of morals in the interest of taking care of oneself. It is about understanding that being kind was something for the weak and lazy, as well as how choices will slowly affect us. Therefore making choices for kindness was the same as making weak choices.  It is statement that to be truly free, you must let go of kindness.

One of the first parts of making this film was to complete tasks to decide what character I was to portray.

TASK 1 – List 5 characters from literature/fiction which whom you have a special affinity.

Geralt of Rivia (The Witcher)

– A good man who grew tired of socialism and collectivism in the world. He believed that one could only own what one earned and that science should not be restrained. He eventually created an underwater city with those values in mind. He called it Rapture and watched it fall apart because of those values. My affinity with him lies in the fact that I too understand how it feels to have something you earned get taken away, or be shared for the “greater good”.

– A regional manager of Dunder-Mifflin, a fictional paper company in Scranton, Pennsylvania. He used to be a salesman before being promoted to his current position and his normal tactic was to be friends with everyone. Unfortunately that doesn’t work all the time and he often fails to do his job. I can relate to this as I often try to avoid stepping on other people’s toes and end up making my own life more difficult.

– An Asian-American film maker who is best known for his work on his YouTube channel, WongFu Productions. He believes in the good inside of people and supports other Asian film makers. This is how I relate to him, as I try to find the good in other people’s actions.

– Youngest director to achieve 14 Oscar Nominations (The last film to do that was Titanic), best known for Whiplash and LaLa Land. His vision of nostalgia with modern elements as well as his focus on story has made him a visionary director. I hope to one day become someone as good as he is and that is what links us.

– If I didn’t have an affinity with my father, I’d be lying. Empathizing with others, a sense of responsibility and bad jokes are just some of things he taught me. That and more is what forms the affinity we have.

– A friend I made in Poly. Assistant producer at a production house and guitarist of emo-math rock band forest, Adam has always been a wild ride and generally fun to be with. He lives in his own world and genuinely does not care what others think. I try to remind myself to not care so much about others and that is what links us.

In the end I chose Andrew Ryan, antagonist of the video game Bioshock, because I felt it would be more interesting to portray a villain. So I started to do more research on him. I had played the game a long time ago and remember being very impressed with the character on how he manipulated others and tried to control his underwater city as it spiralled out of control. Most of the research was gathered directly from the game.

The main inspiration is the first time you hear his voice which is near the start of the game.

My own monologue is largely based off this speech. It starts with a question and ends off with a positive answer. Of course, there are other famous quotes that define Andrew’s character.
“ No Gods. No Kings. Only Man”
“A man chooses. A slave obeys”
“We all make choices. But in the end, our choices make us”

I could already get a sense of this idealistic man who believed in a better tomorrow. But something had caused his fall from grace and so I researched more.

Ryan’s philosophies stem from Objectivism and Meritocracy. The former being a philosophical system developed by Russian American writer Ayn Rand, which Andrew Ryan mainly followed one guideline, “Do not take what you do not deserve”. He was a young man who watched the Soviet Union destroy his family business and his country. This led him to believe that the world was created by great men who strove to make their own way and any time parasites controlled the world, they would ruin it. His impression of communism soured greatly. He fled to America where he felt great men could prosper and for a while, he did. But he saw more people who benefited undeservedly from the labours of others and finally when he witnessed the destruction of Hiroshima, he decided that was the final straw. Science and researched had been harnessed to create weapons for parasites to destroy anything they could not seize.

He created the underwater city of Rapture and filled it with the world’s best and brightest. It was a paradise of freedom and prosperity, where a culture of entrepreneurship was unrivalled. However, his own ideals did not allow him to place regulations on the market so illegal business started popping up and his own belief that they should not rely on the outside world created a hole in the market because people wanted things from the outside world. This was the beginning of Rapture’s slow descent. So it was a story of how one man, in an attempt to escape what he saw as constraints, started to destroy everything he owned.

Based on this research, there were certain characteristics of Ryan I could draw upon. Namely his idealism and anti-altruism. I linked this to the fact that I believe I may have been too nice at times and created a concept where I would be another version of me, one who did not believe in kindness and opposed it. With the speech as a base, I had my monologue roughly complete.

I based the visuals of the film on old 1960s films, with grainy film damage and sepia color tones as the world had largely started adding colour into their films. I could have gone with black and white but I enjoyed the dash of colour the sepia tones gave and the aged look it had. I researched how to create these film effects, such as the rolling offset, frame flickering, grain and the film reel melting.

Like many of the films in that period, I chose to leave the camera mainly stationary. I worked on the transitions as they generally showed what an old film really was like. However, I was also inspired by Satoshi Kon, a Japanese animator who’s transitions are very organic and followed into one another. Thus the scene with the suit walking towards the camera and then transitioning to walking away from the camera was created.

Challenges of the film process was mainly figuring out how to make the scene look nice with so many stationary shots. There was also the matter of voicing over the clips and making sure they fit within the time. It was also challenging to bring out that side of me and maintain it.  Fortunately, I managed to overcome these challenges (at least I think so). I learned a lot about more transitional effects and how to find and properly realise a character during this project. Hopefully I can bring these over to my next project. 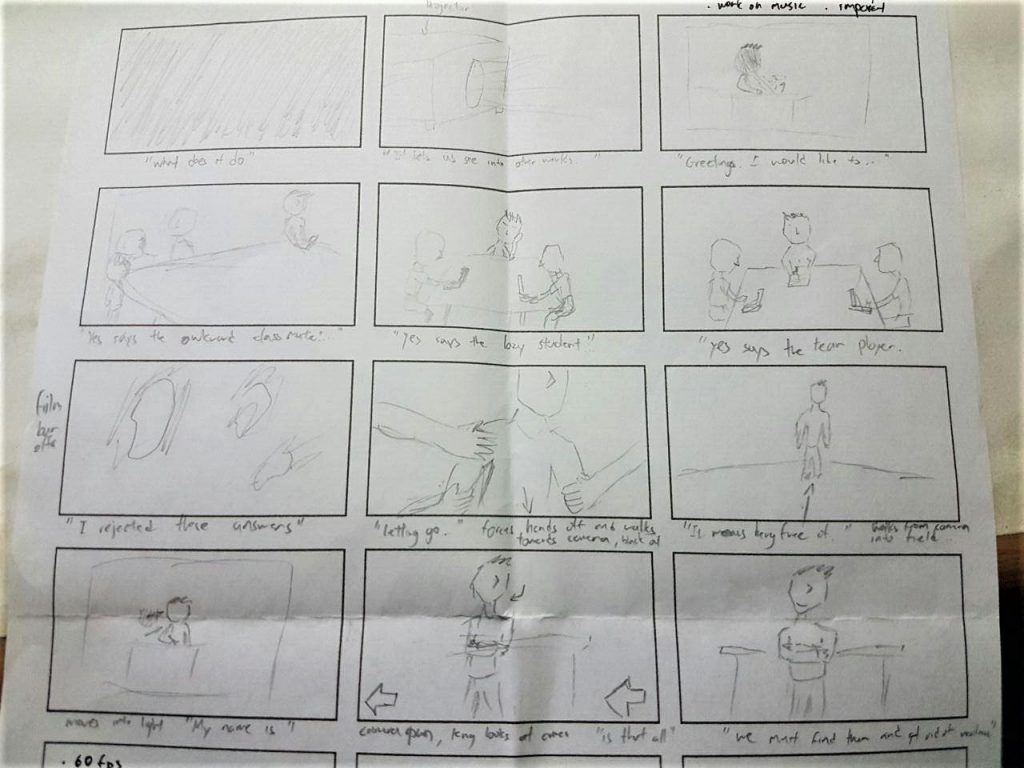 The last 2 parts were actually removed to cut down the film timing. But I felt this was fine as well because the message still stayed the same. I planned the rough framing, what would my VO be saying and any movements within the film. I did not remove the start because I felt it was interesting that while I explained how the device showed another world, the audience would be watching another world as well. It seems to be the basis of films because of the way we show audiences other worlds, personal or otherwise.

Here’s the film, hope you enjoy it. The password is “kindness” 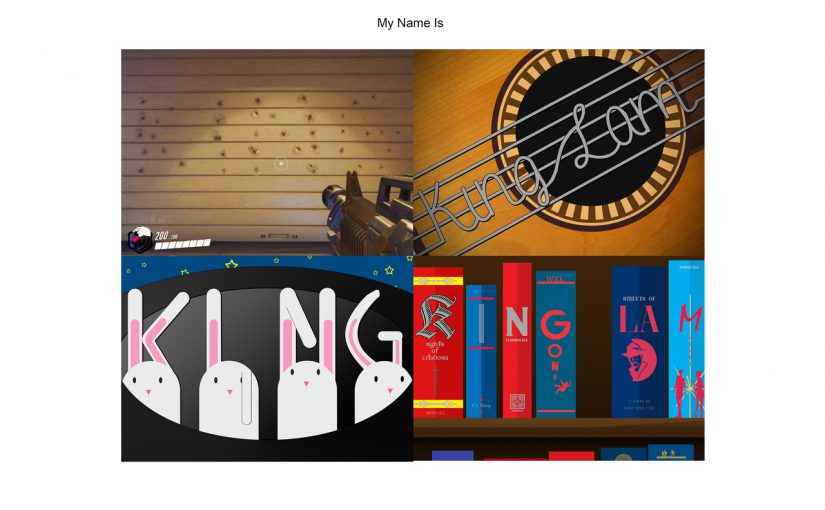 HERE ARE MY FOUR DESIGNS 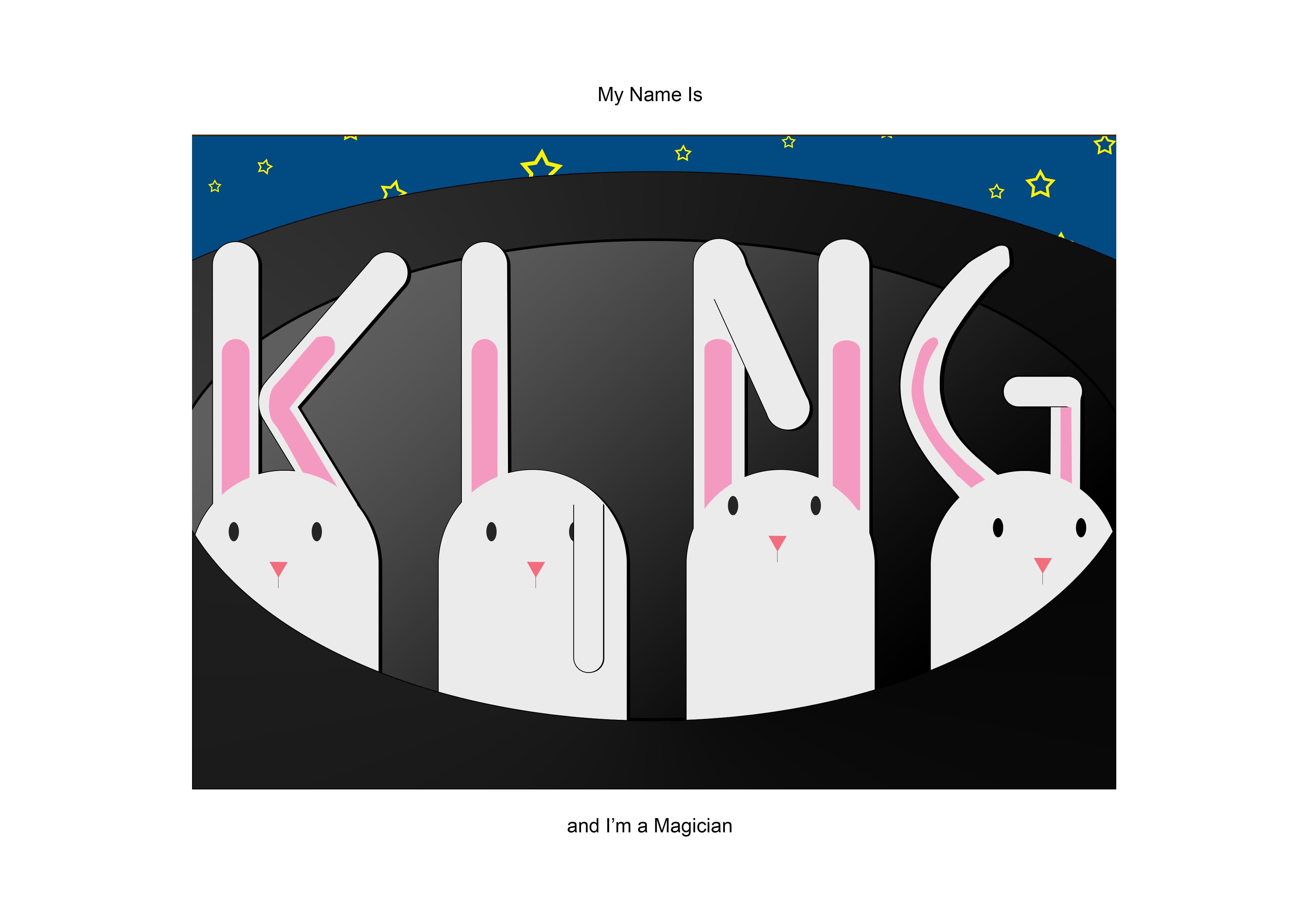 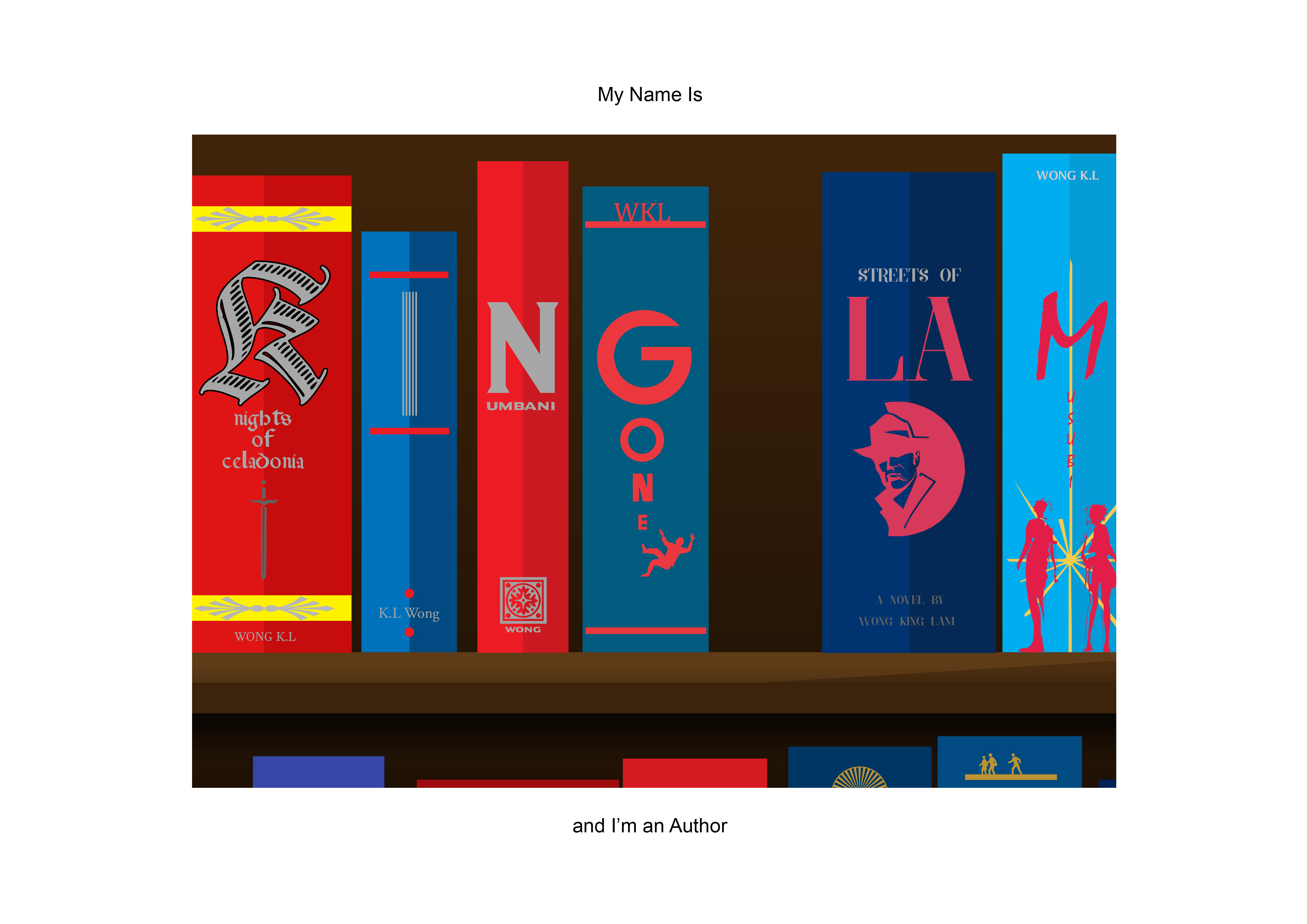 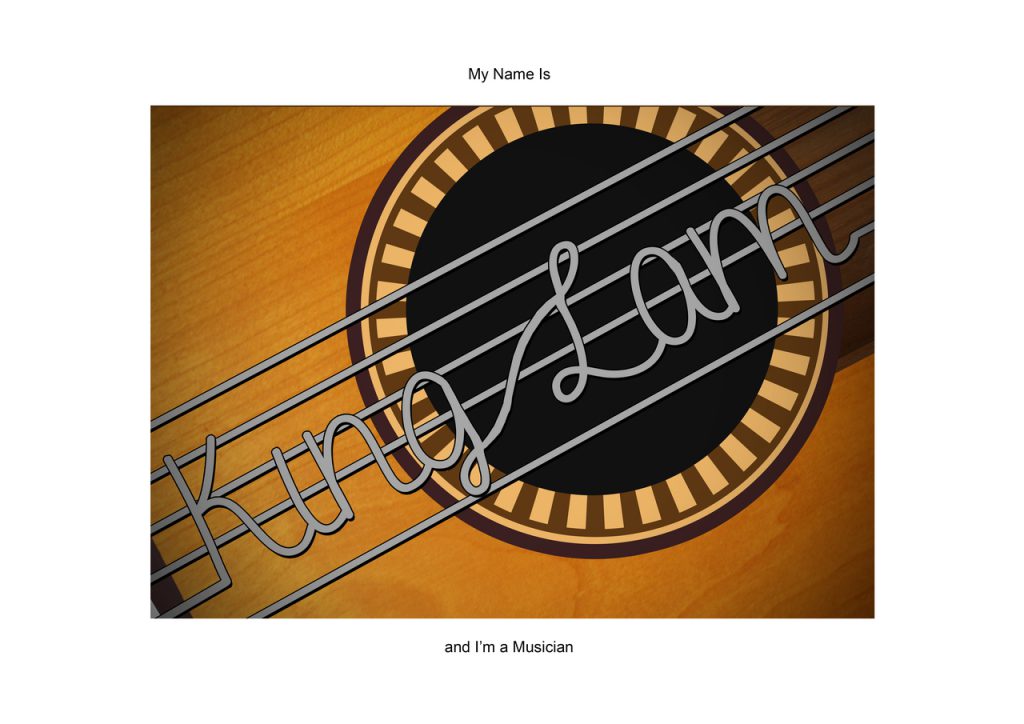 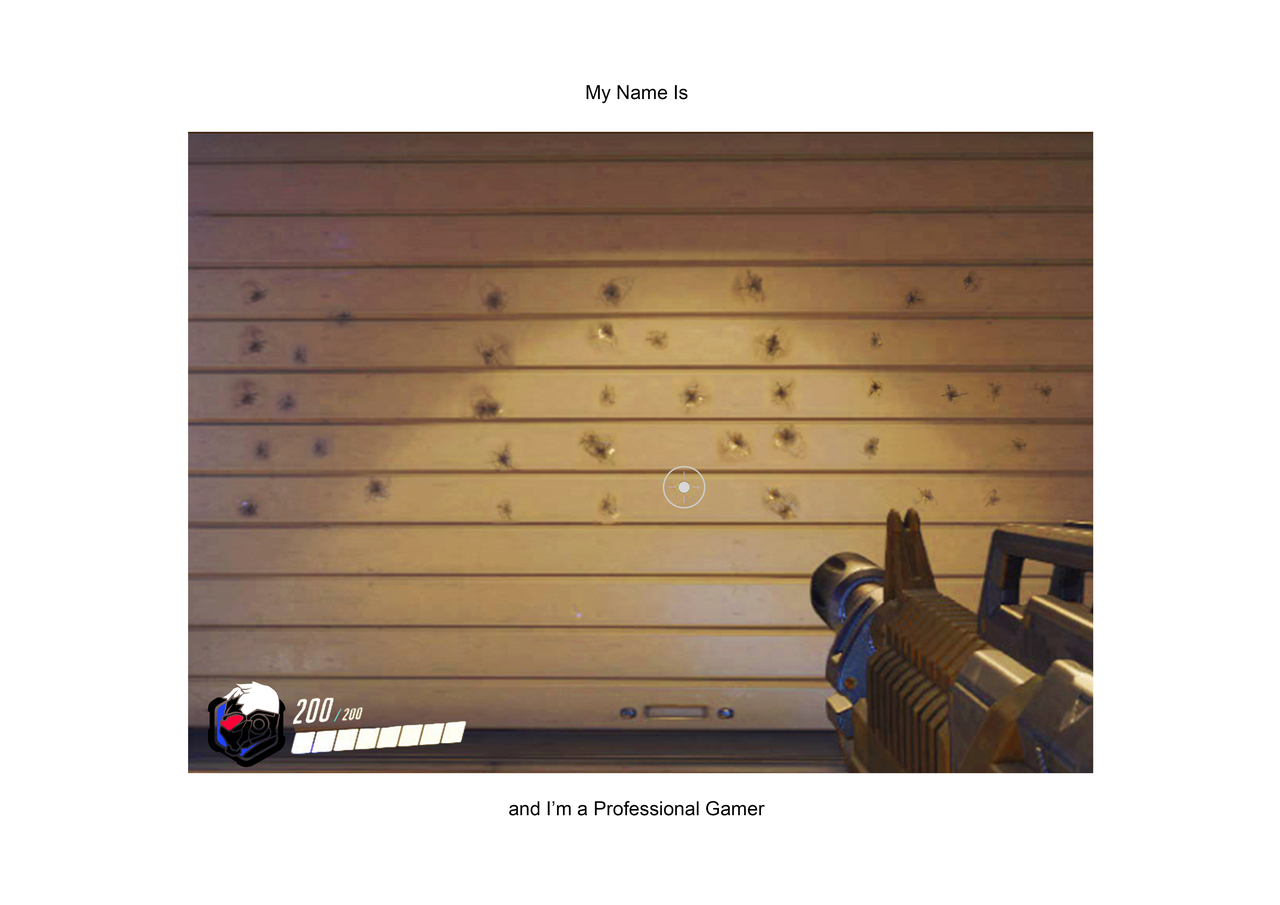 This is Exasperation. It’s frayed apart and is a visual representation of how one would feel under intense annoyance.

This is Irritation. I felt like Irritation starts with one starting point and just grows more and more wild from there. Which is seen in the picture

This is Vengeance. As a more methodical kind of anger, there is a pattern to this line. It still retains a dark and evil looking vibe.

This is Horror. People tend to hear their own heartbeat during horrific moments and that’s what this line represents.

This is Dread. To dread something is to anticipate with great fear or apprehension. The line running through the pattern shows this apprehension.

This is Uneasiness. The patterns in a circle serve as a visual representation of the coiling of guts and a squirmish feeling.

This is Thrill. The extreme amount of patterns and the varying contrasts between dark and light give off a lot of energy, giving this line a feeling of thrill.

This is Optimism. A light happy feeling achieved with what seems to be patterns being blown away by the wind.

This is Triumph. Like a wave crashing over rocks, this line captures the victorious feeling of overcoming an obstacle.

This is Attraction. The straight lines that bend slightly show how attraction is the beginning of love, like 2 people who have just noticed each other for the first time.

This is Love. A fast heart beat and a upward feeling that makes you feel lighter, this is what the line is trying to capture.

This is Sensual. Pleasure in physical and emotional senses is often represented by curves which has been repeated many times in this line.

This is Guilt. A contrast of blacks and whites, crashing into each other without pattern. This represents the conflict of emotion within oneself when guilt exists.

This is Melancholy. Grayish slow moving ink across paper is a visual representation of melancholy.

This is Isolation. The white splotches surrounded by darkness shows how despite being around others, one can still feel very isolated.

This is Revelation. It starts off with dark obscurity, followed by sudden white spots that represent the idea or realization coming to life and growing larger.

This is Shock. This is a emotion that can shake one’s very soul or world. In this line there is focus on where the shock takes place.

This is Bewilderment. Sharp lines with a indiscernible pattern meant to confuse the viewer and create a feeling of bewilderment.