I started off with trying to get a grasp on various theories in QT: Quantum entanglement, cause and effect, the double-slit experiment, wave-particle duality, the Observer effect, etc. Here’s a small mind-map I made because drawing and writing things allows me to condense and understand information better on my own terms: 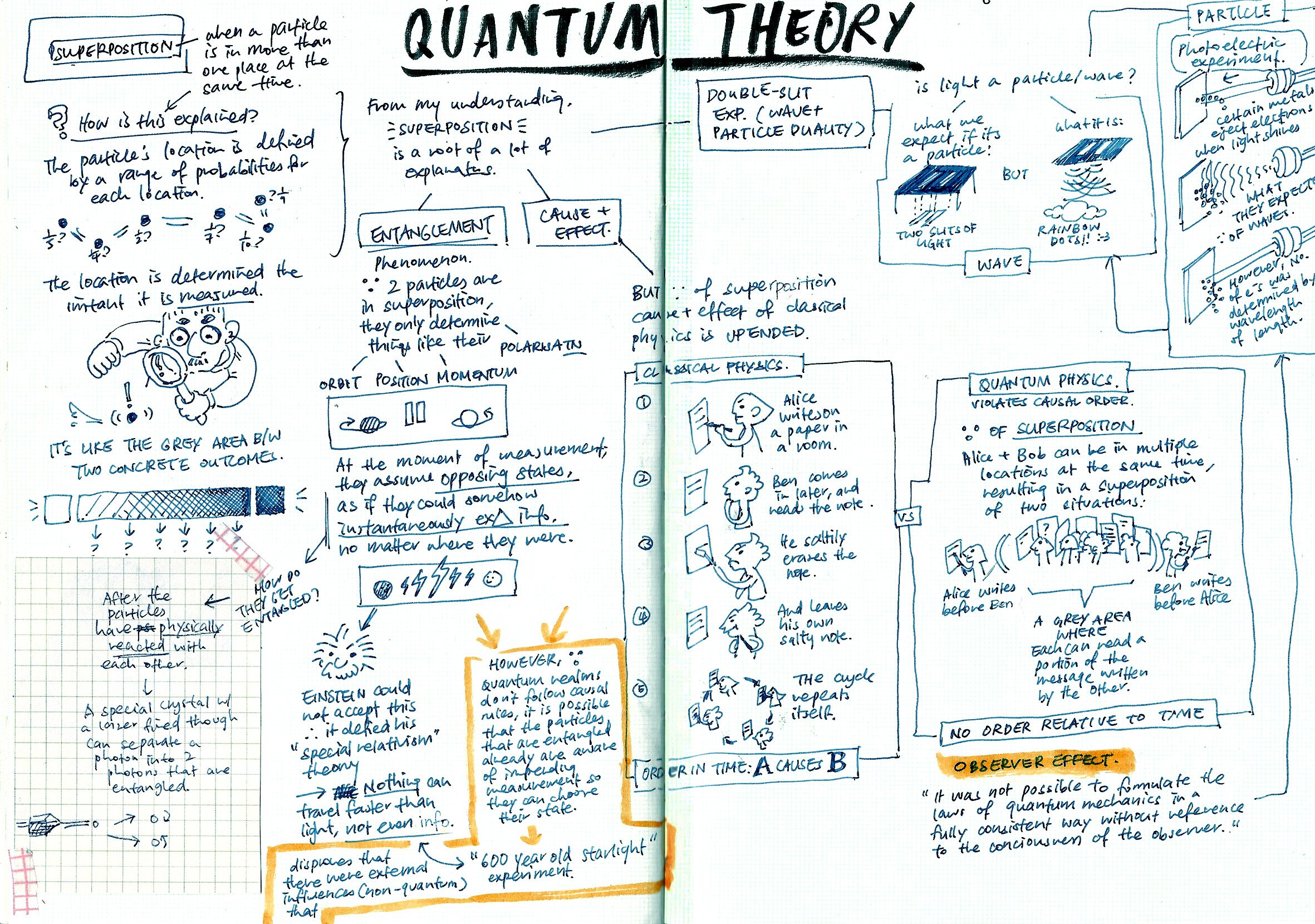 While everything was fascinating and all that, I felt that all the effect boiled down to the essence of superposition: when a particle can only be defined as being in more than one place at the same time, and how its location can only be determined the instant it is measured. Before quantum measurement, the particle seems to exist in a limbo: the greyness of the area between two existences.

Entanglement was a particularly fascinating subject to look up on, because of the unbelievability of the concept of two particles being connected no matter its distance. I mean it all sounds too romantic to be true lol and honestly as someone who doesn’t subscribe to religion, the phenomenon really shook my idea of the impossibilities of the physical world. :-((((

With the mythical nature of this theory, I thus wanted to focus more on translating the dualism presented in entanglement to the dualism that is present in a lot of mythology — like forces of light and dark, good and evil, masculinity and femininity, yin and yang.

Further research into a concept known as the Hegelian Dialectic showed a theory that was deeply linked to dualism. It proposes that we can only comprehend things that are in polar opposites — for example we can only understand the light when we are aware of the dark, only see things as skinny if we see things that are fat. Therefore, the thesis cannot exist without the antithesis, and the truth of any matter is present only in the synthesis — the grey area in between these polar opposites.

Looking into dualities between good and evil, I chanced upon the Hindu concept of the dharmayuddha — dharma meaning righteousness and yuddha meaning warfare. It is a war fought between two sides for nothing other than righteousness, with rules set for the entire war and absolute symmetric information between the two sides such that the side who prevails is a fair winner. I thought it was really relevant to the idea of duality in mythology and also reflected the ideals of the Hegelian Dialectic, and found Hindu art about it that I thought could serve as great references for motifs.

I was reading the Tao Te Ching, a classical Chinese text that is usually attributed to the sage Laozi (老子) from 6th-century BCE. It formed the basis for many religions that came after it, including Taoism and Buddhism, and it seemed to have a connection to quantum theory. Much of the brief alluded to Chapter 2 of the Tao, part of which goes:

This seems to carry the same message as the Hegelian Dialectic that I brought up in the first concept. However, what I found to resonate less clearly but more deeply with what I understood about quantum theory was another chapter, which I have extracted here:

The way is empty, yet inexhaustible,

It seems to be the origin of all things.

It dulls the sharpness,

Becomes one with the dust.

I do not know whose child it is.

It seems to precede the ancestor of all.

With this chapter came an interpretation of its meaning. It discussed that “The way is empty, yet inexhaustible.” referred to how the Tao (The Way) creates all the colossal grandeur we find in this world, yet is infinitesimal, like the dust.

With no discrimination as to whether it is a mouse or mountain, the Tao attends to all things with equal treatment. And because everything is at their core, made up of the same particles, the smaller a unit is, the closer it is to the Tao.

“And since most things in the world go by unnoticed, the hidden is also closer to the nature of Tao.”

And everything that we do notice, the grand and beautiful, are the powers that endure the least — the sharpest, tightest, and brightest are eventually dulled, unknotted and dimmed — nothing lasts longer than the dust that we are all made of. It is by being unobtrusive that we prevail, and come closer to the Tao.

This blurb really heightened the elusiveness of entanglement — that we could be mysteriously connected to absolutely anything — any particle in our body (and there are millions of millions within us) could be entangled with anything else in the universe. Like I could throw out literally anything!! A particle within me could have every possibility of being entangled with another particle floating around like in the Berlin Wall, a circuit in the ISS, a drop in the Amazon, a stain on a wall in like Bolivia or something. That’s so asdfjalf!!

With all those random things (that aren’t really that random) it’d be really cool to create a work that was based off a stream of consciousness. There are so many things that flit in and out of our minds that we never register (but maybe its our entangled particles calling out to us HAHAHA). It would make for a really interesting and quirky work hehe.