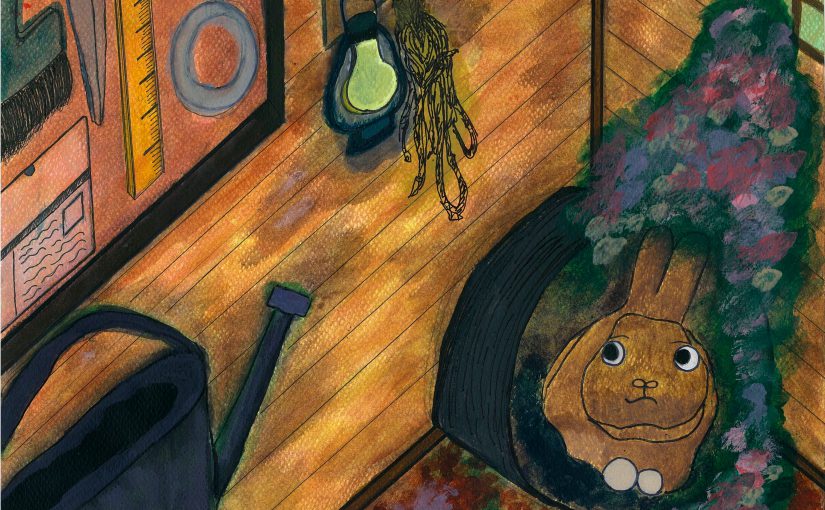 “FIRST he ate some lettuces and some French beans; and then he ate some radishes; AND then, feeling rather sick, he went to look for some parsley.” – The tale of Peter Rabbit

“…Peter wriggled out just in time, leaving his jacket behind him. AND rushed into the toolshed, and jumped into a can.” – The tale of Peter Rabbit

“Mr. McGregor caught sight of him at the corner, but Peter did not care. He slipped underneath the gate, and was safe at last in the wood outside the garden… PETER never stopped running or looked behind him till he got home to the big fir-tree.” – The tale of Peter Rabbit

The first composition shows Peter’s mischievousness and greed – for entering Mr. McGregor’s garden and devouring all the vegetables he can find/ possibly likes to eat.

The second composition depicts fear. Notice Peter is without his blue jacket because he abandoned it while making his escape from the gooseberry net. Peter is hiding in a can which is in a toolshed observing Mr. McGregor turning items around in a bid to look for Peter.

The last composition shows how Peter makes his great escape back home – never stopping to turn or look behind him till he’s safe and sound.

Overall, it has been a fun, though a little intense, experience creating these final compositions. Instead of sticking to something (relatively) tried-and-tested, I wanted to try my hand at experimenting with mixed mediums – watercolour, acrylic and ink. I also wanted to experiment with illustrative, picture-book-styled compositions instead of familiar art styles such as impressionism and symbolism. When creating these compositions, I envisioned these paintings to go along with texts from the story such that both mediums – verbal and visual storytelling, complement each other.

Reflection:
DA2000 has been an interesting and an enjoyable class. It made me learn to appreciate the purpose and beauty of colours, as well as practice making decisions to solve design problems. I learnt that meaningful art is one with a purpose, one which tells a story, one which is more than an aesthetic piece, and one which evokes emotions. The permutations and combinations of colours are seemingly infinite, and a colour palette is subjective to the creator of the works. While the little details and subtleties of a composition are essential, the whole may be greater than the sum of its parts.

Thank you everyone for the exciting Thursday evenings for the past semester, and may you have a great Summer hauls ahead!