Written in collaboration with Erick Blinderman. 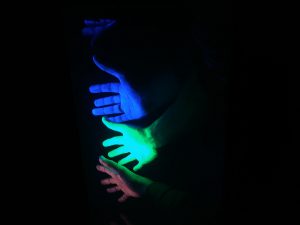 The work is a video installation of the exploitation of the rare earth mineral Europium. Europium is used to make the Euro note currency as well as flat screen televisions and computer devices. Its characteristics are that it has a naturally neon colouring that can distinguish a genuine Euro to a counterfeit note. Europium’s phosphorescent quality cannot be replicated artificially. It is unfortunately a non-renewable resource that happens to be much more valuable than gold. The inevitable fate of such a mineral is brought to light through the stark contrasting imagery of the natural and the clinical. 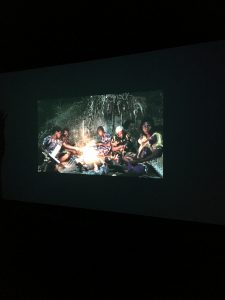 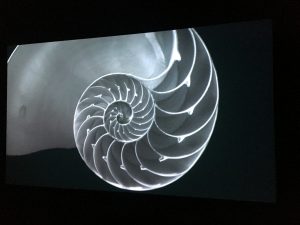 The video cleverly starts off with showing the way oceanic communities trade with shells as their currency. They are ones who are in tune with nature and responsibly protect their resources. Ironically, Europium is extracted from these areas and not from Europe, the continent it was named after. 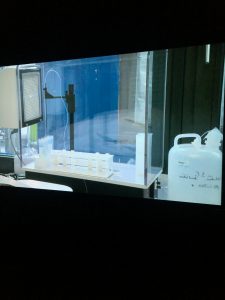 After this establishing scene, viewers are abruptly brought to see large factory concrete buildings, white clinical laboratories where this precious material is being processed and housed. Men in fancy suits are seen milling around the corridors of the compound and to me, they represent the developed, urban giants exploiting a resource that other communities are doing their utmost best to preserve. 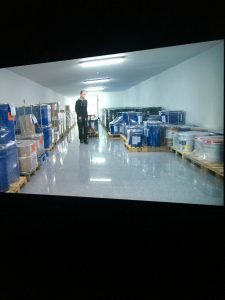 In another powerful scene, rows upon rows of flat screen televisions are sold in a department store, displaying vivid and sharp images of nature. I cannot help but think about how these duplications of reality are made at the expense of the seabed being destroyed. The screen I am using contains Europium and so does my phone.

Apart from the sound being too soft during the exhibition, the video managed to portray the predicament of Europium, one of the many resources that are being exploited. This work, along with the other exhibits shows the selfishness of human actions but also presents an alternative way of life. On a positive note, viewers are encouraged by the way oceanic communities are protecting the sea and living sustainably.