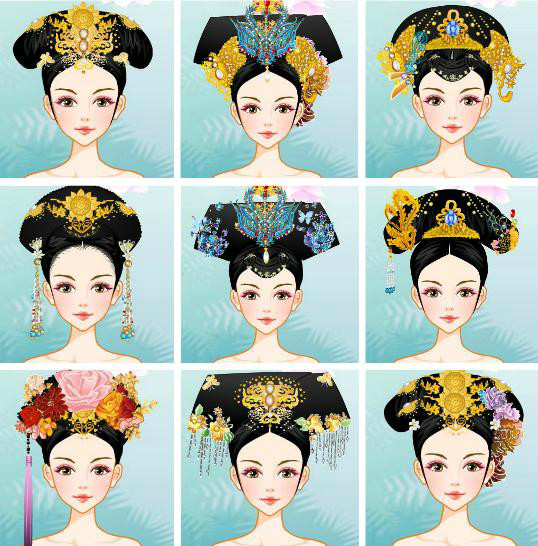 This article will be briefly divided into the story if Cixi, and the development of  Qing hairstyle. However, I could not find resources that clearly linked Cixi’s ranking with her hair style or accessory changes..So you may want to skip the lengthy text of Cixi story if you are just interested in the development of hairstyle.

Empress Dowager Cixi, of Manchu Yehenara clan, was a Chinese Empress Dowager and regent who effectively controlled the Chinese government in the late Qing Dynasty for 47 years, from 1861 until her death in 1908.

In 1898, Emperor Guangxu and Xici had conflicts over the Hundred Days’ Reform, Cixi rejected the, as detrimental to dynastic power and placed Emperor Guangxu under house arrest for supporting radical reformers. Since then, Cixi became the only authority in the court. Although Cixi’s main intention is to protect his country and the Qing Dynasty, she has underestimated the power of foreign invasion and have compromised too much to keep the vulnerable peace. China was on the phase of changing from Dynastic reign to modern China, politics became very complicated and western countries was aiming at China. 1900, the Eight-Nation Alliance invaded Beijing, Cixi together with Emperor Guangxu, escaped to Xi’an. Cixi attempted to create new reform campaign. in 1908, Cixi passed away in Beijing, one day after the death of Emperor Guangxu.

The titles of Cixi across the years:

1852: 贵人Noble Lady, Sixth Pin, in the nine ranking system. She was given the title “Noble Lady Lan”. Among other chosen candidates were Noble Lady Li of the Tatala clan(Later Consort Li), and Concubine Zhen of the Niohuru clan(later Emperor Xianfeng’s Empress Consort).

1856, 懿妃 Consort Yi, fourth rank, one rank higher than Dame. She was elevated to this position after giving birth to Zaichun, Emperor Xianfeng’s only surviving son, on 27th April 1856.

1857, 懿贵妃Noble Consort Yi, the rank placed her only second to the Empress Consort among the women within Emperor Xianfeng’s household. Unlike many of the other Manchu women in the imperial hosuehold, Cixi was known for her ability to read and write Chinese. This skill granted her numerous opportunities to help the ailing emperor in the governing states affairs in daily basis. Occasionally, Emperor Xianfeng had Cixi read palace memorials for him and leave instructions on the memorials according to his will. As a result, Cixi became well-informed about state affairs and the art of governing from the ailing emperor.

1898, 慈禧太后Empress Dowager Cixi. Cixi put Emperor Guangxu under house arrest after his attempt to push Hundred Days’ Reform. After which, Xici became the supreme power of Qing government and started her monopoly. Although from the title of “Empress Dowager”, it did not change since 1861, her power increased greatly after her ‘co-worker’ Ci’an’s death and the house arrest of Guangxu.

As we can see from the chronicle, Xici’s status in the imperial household rose extremely fast. In ten years(1851-1861), she was elevated from a xiunv with no rank, to Empress Dowager, the highest position for women in Qing Dynasty system.

However, Cixi lived in a socially unstable period of time in Chinese History, Qing Dynastic power was threatened and interfered by western invaders as well as the reformers within China. The title of Empress Dowager became less powerful as political situation changed. Qing court was under a series of unequal treaty with foreign countries, and has became a puppet regime.

Compared to Wuzetianhttps://oss.adm.ntu.edu.sg/tzhao002/emperors-wife-hierarchy-part-1-wu-zetian/, Cixi was at a time that China has declined power, while Wu Zetian was building a stronger nation. Both are of equal status by name, however in real, Xici was not as powerful in international aspect. 1905 AD, Sun Zhongshan and his peers established Zhonghua Minguo(Republic of China). Qing Dynasty ended in 1912, with its last emperor Puyi.

Now let’s look at the accessories of Qing Dynasty.

Cixi, like any other girl, pay a lot of attention on her grooming. Even at older age, she still indulged in dolling up herself. Cixi lived in late Qing Dynasty, compared to early Qing, China became much wealthier after Qianlong’s reign(1735-1796). Thus in late Qing Dynasty, the accessories, especially for imperial household, were more luxurious and flamboyant.

One popular hairstyle during Qing Dynasty is 两把头Two Side Bun. This hair style is demure and convenient to incorporate hair accessories onto it. This hairstyle splits hair to two sides, then bun up at the top of the head.

However, as China became wealtheir in mid Qing Dynasty, under Emperor Qianlong’s reign, the original small two side bun is insufficient for women to pile up all kinds of jewelries on their heads.  The hair bun became fragile and would collapse at one touch. Thus, a new type of hair accessory emerged–扁方bian fang.

Bianfang is like a very long 簪zan(hair pin), and its flat in shape. Women used Bianfang to bun the excessive hair that could not hold the weight of accessories or the weight of hair itself. It upports the hair and allow more accessories to be added on.

Bianfang is a reflection of status in Qing Dynasty. It is also a symbol of becoming an adult for girls back then, just like 笄ji. Different occasions requires different types of Bianfang, people pf different background wears differently as well.

For example, during funerals wife mourning for her husband, she needs to style her hair in a very loose and effortless way, with a small bone bianfang on her hair.  If it is the funeral for father or mother in law, then the woman should place a silver or white copper bianfang horizontally on her head.

For royals and rich families, the material and design of bianfang can be very precious and exquisite. Emperor’s concubines and other noble ladies would purposely reveal the two ends of bianfang, as that is the most elaborated part, to attract attention.  Sometimes there will be tassels at the ends of bianfang. Wearing bianfang restricts the movements of head, neck, and shoulder, together with cheongsam and elevated shoes, making the ladies look very demure when walking.

For Manchu girls, the symbolic hairstyle, as we can see from many dramas and movies, is 旗头 Qi Tou, direct translate as flag head.

Interestingly, the elaborated, exaggerated Qi Tou is only developed at the very late stage of Qing Dynasty, after the death of Emperor Xianfeng(the husband of Cixi). Before that, hairstyle was kept simple and small, at special occasions Empress and other imperial household ladies would wear some Chai or the most, 钿子Dianzi.

Women would decorate with some hair accessories such as chai钗 and some flowers. As Bianfang helps to stabilize, there was a trend that more accessories were put onto hair. However, it got out of control as all ladies wanted to show off and be pretty. It went until the extend that Emperor Xianfeng had to officially gave an instruction to the ladies in the Forbidden City that the dressing code should be simple and non-exaggerated, maximum of only two flowers can be worn on hair. If three is worn, there will be punishment accordingly. Xianfeng believed that it is a good tradition and culture to be thrifty even in imperial families. As such, the hairstyle was not out of control at Xianfeng’s reign.

However, after Emperor Xianfeng passed away, the fashions and pursuit of hair started again

And to satisfy their ego and ambition of piling up hair accessories, the Qi Tou became larger and larger.

And it became SOOOOO big that real hair could not satisfy the appetite. So, what the ladies did is, instead of using real hair, they just simply put a black board on the hair bun, to substitute real hair, holding more and more accessories.

as we can see from the above image, Qi Tou has developed to such a exaggerated stage, almost like someone from Beking Opera.

Although Emperor Xianfeng has regulated the use of hair accessories, Cixi herself was a girl that pay a lot of attention to grooming, and I guess that is why after Xianfeng’s death, Cixi came into power and she probably  brought back all the fashion and trend of dolling up. As a saying I read somewhere, in hereditary monarchy, where one person has the monopoly, the character of the person is the character of the nation. So I guess Cixi more or less is responsible the development of Qi Tou..

One bizarre thing, although Qi Tou looks so flamboyant and so showing-off, it is actually not restricted to social status. Because in Chinese Manchu tradition,Qi Tou is a casual hairstyle, and should be worn with only casual dress.No matter what social status you are, you can wear it. For formal occassions, ladies should wear Dianzi 钿子 as shown earlier. However, the influence of western culture diluted many of Chinese traditions and Cixi herself sometimes would ‘mix-match’ Dianzi with casual dress, (intentionally or unintentionally we are not sure), and Qi Tou could be seen as a more fashionable accessories, so end up the tradition was not strictly followed. It is said that Qi Tou was seen with formal dress in late Qing Dnasty as well. At the point of time, I guess all the traditions and customs are interrupted by the complicated political situation and people’s pursuit of new things.

What we can say is, for sure, people of better wealth and status are able to afford better hair accessories with more precious material, like gold, high quality jade, ruby, pearls, etc. Empress Dowagers and Empress Consort are able to wear phoenix pattern, abundant of gold, while commoners or abandoned concubines simply couldn’t afford.