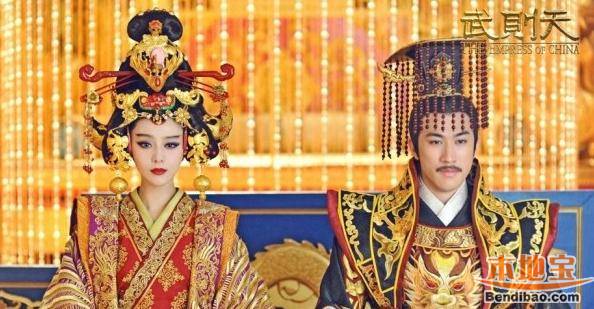 The hierarchy of Emperor’s wife can be very complicated across Chinese History. During different Dynasties,the titles of the hierarchy can be very different. Some Dynasties have very sophisticated rankings and categories while others have simplified systems. The rankings of the wives can be equal to political status in the Imperial Court, although they are not allowed to interfere political affairs. Different rankings receives different salaries, daily supplies, accommodations, and the number of servant, etc. And of course, their attire and accessories can be quite different.

For detailed information about the hierarchies across different dynasties(if you are interested), refer to this linkhttp://baike.baidu.com/view/97819.htm(Chinese) or https://en.wikipedia.org/wiki/Ranks_of_imperial_consorts_in_China(English). Even I am a Chinese and I learnt about Chinese History, I still find the information overwhelming and hard to digest at one go. So let’s try not to swallow everything. Instead, I prefer to select more typical dynasties or historical figures as the guideline.

Speaking of the most famous women that rise from bottom to the top in power, there are only few to take note on, and each of them are from different dynasties.  In fact many Chinese Dramas and movies have depicted their stories, with some imaginations and fantasies. There is one thing we need bear in mind, that all the stories we know about ancient Chinese and stories are derived from historical documentations, which is very limited and simplified in ancient Chinese language. A story can be as short as one sentence. So there are a lot of guessing, imagination, and ‘retouching’ on that one sentence to give an intriguing and complete story. We can only say that historians are trying their best to stick to the truth of history, but no one can be 100% sure about what happened in details hundreds thousands years ago.

What I believe is, art creation itself demands imagination and innovation. It is not a textbook for history student or scholars.  As long as it does not go against the overall history, a little bit of ‘retouching’ can add fun to the design. Just like no movie is completely real even it says ‘based on a true story’. With this idea in mind, let’s look at the few famous women that rose from bottom to top power(as the emperor’s wife)–Wu Zetian(The Chinese Empress) and Cixi, the Empress Dowager. I chose these two women because they are no doubt the most famous two ladies, and their stories happened during Tang Dynasty and Qing Dynasty respectively, where the system for choosing the wives of Emperor are comparably refined. In addition, both of them not only rose to the top position for women but also, their power was higher than men at then.

The Story of Wu Zetian 武则天

Wu Zetian is also known as the Empress Consort Wu, Empress Wu, was a Chinese sovereign who ruled unofficially as empress consort and empress dowager and later, officially as Empress Regnant during the brief Zhou Dynasty(684-705), which interrupted the Tang Dynasty(618-690&705-907). Wu was the only Empress Regnant of China in more than four millennia.

She was the concubine of Emperor Taizong(reign 626-649)。 After his death, she married his succesor-his ninth son, Emperor Gaozong(reign 649-683), later officially became Gaozong’s Empress Consort(皇后),The highest ranking of all the wives, in 655. She had considerable political power even prior to her Empress Consort title. After Gaozong’s debilitating stroke in 660, Wu Zetian became administrator of the Court, a position equal as Emperor, until 705.

Her rankings and titles through out the years:

才人Cairen:637 AD, 14 years old, became the concubine of Taizong, title 才人 cairen, ranking of one of consorts with the fifth rank(五品 fifth Pin) in Tang’s nine-rank system for Imperial officials, nobles, and consorts.

Buddhist Nun: Emperor Taizong died in 649, while Wu did not have any son of his, she had to be permanently confined to a monastic institute after emperor’s death, according to Tang’s custom.

昭仪 Zhaoyi：652 AD, Wu was 27 years old. The son of Gaozong, who became the Emperor after his father’s death, decided to bring Wu back to the palace as his concubine(Although Gaozong was effectively Wu’s step–son) and gave her the title of Zhaoyi, which is the highest ranking of thenine concubines of second rank(二品2nd Pin). Wu progressly gained more and more influence over the governance of the empire throughout Emperor Gaozong’s reign, and eventually she effectively was making the major decisions. She was regarded as ruthless in her endeavors to grab power and was believed even to have killed her own daughter to frame Empress Consort Wang(and later, her own eldest son Li Hong), in a power struggle.

天皇天后Imperial Emperor and Empress：660 AD, Emperor Gaozong suffered from illness and began to have Empress Consort Wu make rulings on petitions made by officials. It was said Wu had quick reactions and understood both literature and history, and therefore, she was making correct rulings. Thereafter, her authority rivaled Emperor Gaozong’s. Slowly, Gaozong became aware of Wu’s increasing power however, he could not stop Wu effectively.

皇太后Empress Dowager：683 AD. Emperor Gaozong passed away, his son with Wu, Li Xian, ascend to the imperial throne, became Emperor Zhongzong. Wu thus became the Empress Dowager, title for the mother of Emperor. However, Zhongzong only had a short 6 weeks of reign.  As he showed signs of disobeying Empress Dowager Wu, Wu deposed him and replaced him with her younger son, Li Dan, becaming Emperor Ruizong.

Although Li Dan carried the title of Emperor, Wu was the actual ruler, both in substance and appearance. She did not even follow the customary pretense of hiding behind a screen or curtain, and in whispers issued commands for the nominal ruler to formally announce(垂帘听政). Ruizong never moved into the imperial quarters, appeared at no imperial function, and remained a virtual prisoner in the inner quarters.

称帝 Empress Regnant：690 AD. Wu had Emperor Ruizong yield the throne to her and established the Zhou Dynasty(武周), with her named as the ruler. She gave herself the title 圣神皇帝(Supreme Imperial Emperor).Traditional Chinese order of succession sis not allow a woman to ascend the throne, but Wu Zetianwas determined to quash the opposition and the use of the secret police did not subside, but continued, after her taking the throne.

Removal and Death: by 705AD, Wu became seriously ill. In Febrary, Wu passed her throne to Li Xian, Emperor Ruizong. Ruizong honored her with the title of Empress Regnant Zetian Dasheng(则天大圣皇帝). On 3rd March, Tang Dynasty was restored, ending the Zhou. Wu passed away on 16th December 705,and pursuant to a final edict issued in her name, was no longer referred to as Empress Regnant, but instead as Empress Consort Zetian Dasheng(则天大圣皇后).

Let us look at the attires of Wu Zetian at her different stage of life.

When she was only 14, as a contestant in beauty peagent 秀女, she has very simple hairstyle, with two buns on each side of the head, called 双环重髻 the double loop bun, usually used by unmarried girls, with minimal hair accessories. The hair accessory is Chai钗 (refer to previous post about traditional Chinese hair accessories link:https://oss.adm.ntu.edu.sg/tzhao002/tag/chinese-hairstyle/).

After she was selected by Emperor Taizong and entitled Cairen, ranking fifth Pin, she has better ans slightly more hair accessories. Her hairstyle also changed. Her hair was splited into two sides and shaped like two loops on top of head, called 双环望仙髻 the ‘double loop fairy-watching bun’. This is a very popular style during Tang Dynasty. Her hair accessories now have not only Chai钗， but also Dian 钿, and tassels that resemble Buyao步摇.

When she was called back from Buddhist Temple and became the concubine of Gaozong, she was entitled 昭仪 Zhaoyi, 2nd Pin. It was a great leap in hierarchy. At this stage, her accessories are much more elaborated and luxurious.

In the first picture, her hairstyle is called 盘桓髻 Linger Bun, with all her hair gathered at the top first, then linger upwards, with a flat top. Then decorated with 篦Bi infront(the comb-like accessory), Chai钗(long pin with decorations) and Buyao步摇(pin with tassels) at sides, and some Dian钿(decorative flowery pin).

In the second picture, the hairstyle is same as Cairen style, the ‘doule loop fairy-watching bun’. However, there are more accessories, making her more demure, wealthy-looking, and high class.

The makeup in first picture is also a typical style during Tang Dynasty. It is called 梅花妆 the plum flower makeup, with plum flower motif at the middle of forehead.

Generally at Zhaoyi stage, her accessories are elaborated and flowery, colorful, and still has the youthfulness.

After she took down all her enemies and became the Empress Consort of Emperor Gaozong, her attire became even more flamboyant.

Hair accessories are excessive on her head. Chai, Dian, Buyao, Dian, Huasheng(forehead accessory), mostly golden in color, with some coral. The material are more costly, the amount of material used increased drastically. Also. Phoenix pattern are more obvious. Red and Yellow is the main colors. In addition, only the wife, not concubine, can wear scarlet color, as shown in the picture below.

Finally, she became the Empress Regnant, or the female Empress.

The hairstyle is called 高髻 high bun. the hair accessory is becoming more unisex, with less flowers and a throne same as previous male Emperors, with gold Chai at sides. Gold is the main color, giving the impression of supreme power. As she was already at the age of 67, her accessories are not as flowery and colorful anymore. She is matured ans experienced in handling all affairs of states and life. She did not need to dress prettily to impress any Emperor as she herself is the highest power. She only need to dress LIKE A BOSS.

There are many other hairstyles in Tang Dynasty, I cannot count and introduce one by one. The general trend is the higher position the person is at, the more elaborated one’s accessories will be. The color of gold and red is a symbol of power, and can only be used at certain position. Also, the use of phoenix and dragon pattern is very strictly classified.