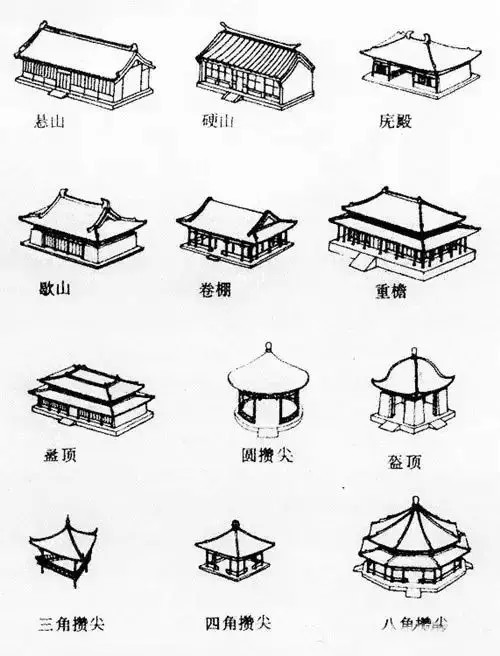 From reading articles about Chinese architecture, I realize that there is rules in different pitched roof regarding owner’s hierarchies. This could give me some references in designing my jewelries as I am thinking of making a set with different social status representations(like from lower class girl to high rank empress).

In traditional Chinese architecture, the type of roof design is a reflection of the owner’s social status. From top class to commoners:

1st: 重檐庑殿顶。Double Hip roof. This type of roof can only be used for the main hall in the Forbidden City, and Confucians Hall, and main Buddhist temples.

Hip roof is a type of roof has all sides slope downwards to the walls., usually fairly gentle slopes. The roof slope curves inwards to form a convex surface. Double Hip roof, as the example shown above, is the layering of hip roof. Hip roof has five roof ridge, with the main ridge lying on the top horizontally.

2nd: 重檐歇山顶。Double Saddle Roof. This roof is used in the palaces, gardens, temples.

Tian An Men Gate, for example, is using this type of roof. This design comprises a hip roof that slopes down on four sides, and integrates a gable on two opposing sides. It has nine roof ridges, including one main ridge.

This roof design has influenced Korean and Japanese architectures. The roof only have two slopes, with the two sides of “人”shape slightly protruding out than the wall below.

6th: 硬山顶。Gabbled Roof. According to Qing Dynasty’s regulations, only government officials below six Pin(see details at the bottom of the article) and commoners can use gabbled roof.\

This type pf roof only has two slopes, and the walls on each side is at the same level or slightly protruding out than the roof(compared to suspension roof).

Round Ridge roof has no main ridge on top of the rood slopes, thus the lines of the roof is more gentle and smooth, which is why it is commonly used in gardens and casual places. It is also used for the servants’ residence in the Forbidden City.

8th: 攒尖顶。Pointed Roof. Usually used in pavilions ad towers. There is no rank specification for this type of roof.

Other types of roofs:

盝顶 Lu roof. It is a flatted roof surrounded by four side slopes and eight ridges.

盔顶 Helm Roof. It is similar to pointed roof. However, the slopes are curved outwards at the upper part and then transit to inwards, resembling a helmet. It is usually used in ceremonial architectures or pavilions.

From my readings, there is a more detailed introduction for Saddle Roof:

On the ridges of the saddle roof, there are always beastly creatures sitting. The types, numbers, and sequence of the creatures need to follow strict rules. For example, sitting on the two sides of the main ridge is the 正吻 Kiss Beast, also known as Swallow Ridge Beast, as the way they look.

On the 戗脊 Hip ridge(the diagonal ridge below the flight gabbles on each side) there are a row of running beasts.

There are ten beasts in total, the leading character is a heavenly being riding his beast ,the rest is dragon, phoenix, lion, Pegasus,  Seahorse, Suan Ni(son of dragon), Ya Yu(Sea creature in tales), Xie Zhi(goast-like beast), Dou Niu(water related beast), Shi Xing(Thunder related beast). Some of the beast may exchange places.

Chinese Official rankings is very complicated, just like the modern China as there are too many people in political area holding positions. The highest official would be ranking one Pin, while the lowest would be nine Pin and blow. and in between two Pins, like One Pin and Two Pin, there are many divisions and subtitles. Four Pin would of middle to low range.

One thought on “Pitched Roof in Chinese Architecture, and Hierarchies”