I am using two quotes based on my favourite movie, The Princess Diaries 2001.

The first quote that I’m using is: “A Queen is never late. Everyone else is simply early.” 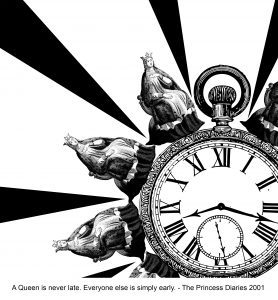 I wanted to show that time revolves around the Queen. Initially, I planned for the Queen to be the huge emphasis and the clocks would be the one surrounding the Queen. However, I preferred the circular motion that the clock has, to give off the revolving feeling. 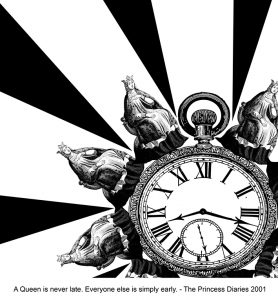 I tried to make the whole image of the clock to be included, so it does nut appear cut off so abruptly from the composition. I still kept the clock to be off center so that the spreading effect from the lines would be more obvious, compared to the clock being in the middle. When the spreading effect from the lines are more obvious, there is a greater emphasis placed on the huge clock. I feel that Composition 1B worked better for me. 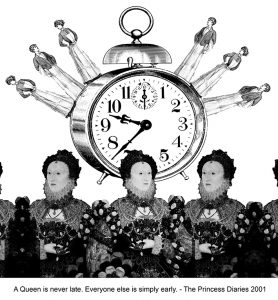 The Queen is in the foreground and has the biggest size to empasize on its prominence relating to time, as seen by the secondary subject matter which is the clock in the foreground.  I also used repetition for the Queen so that there is a sense of harmony when complemented with the singluar clock behind.

There a 6 people on top of the clock who appear to be waiting for the Queen’s arrival. They are not really that dressed up to show that they are commoners. Their sizes are also a lot smaller as compared to the Queen to show the little significance they have when it comes to matters regarding time.

However, I feel that that this composition was still not complete. Therefore, I decided to warp images of the clock as the background. However, I felt that the background was too overwhelming and the 6 people could not really be seen. 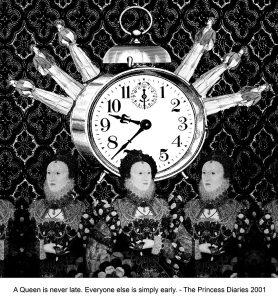 To keep the background simpler, I decided to put a vintage ornamental wallpaper and threshold it to make it a little more faded. This is to reduce the chances of the background to clash with the primary and secondary subject matter. Even though the Queen, the clock and the 6 people could be seen very clearly when contrasted with a dark background, I still feel that the background is too simplistic. 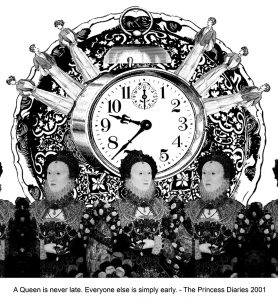 This time, I added in a vintage ceramic pattern that has a similar circular motion as the clock. I feel like there is a sense of harmony here, when the motion of the clock and the ceramic pattern are in the same direction. At the same time, the 6 people could also be seen as they are relatively lighter compared to the darker ceramic patterned background. 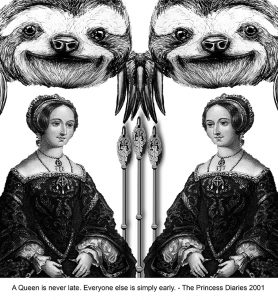 As for this new composition, I tried making equating the Queen to a sloth. A sloth is a very slow animal in nature. This is to show that no matter how slow or late the Queen is, she would still be in control of time due to her power. The sceptres are placed in the middle to complete the symmetrical composition and further reiterates her power as the Queen.

My second quote is: “Because you saw me when I was invisible.” 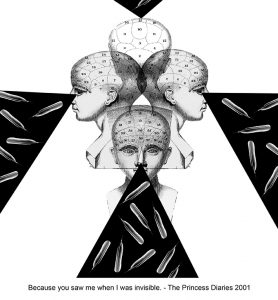 I wanted to materialize “invisible” therefore, I chose something as light and insignificant to be feathers as the subject matter the faces are staring at. This is to address the ” saw me when I was invisible”. The faces are arranged in a circular motion to have a certain sense of harmony. I also chose dark triangle background for the feathers to bring out the feathers even more. 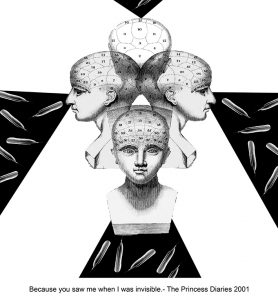 I tried to make the faces appear in front of the triangles so that the faces could be seen clearer and I also feel that the triangles were taking up muh of the space in the previous composition which should be avoided as I wanted the faces to be the main focus.

However, I still feel that this composition is still lacking and thus, I decided to work on background. 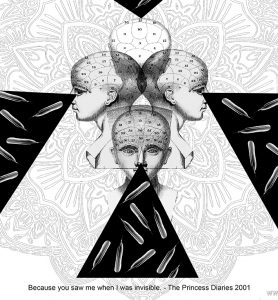 I decided to put a mandala at the back and played around with the filters to that it is a lot lighter and does not take away the attention from the faces. 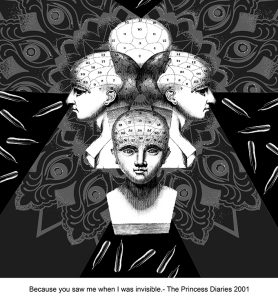 I repeated a pattern to make it appear as a mandala. I liked this pattern a lot as it has repeated eyes, to go along with the ” saw me when I was invisble” part. However, even though I really liked this colour scheme, I could not use it as it has greys in the background. 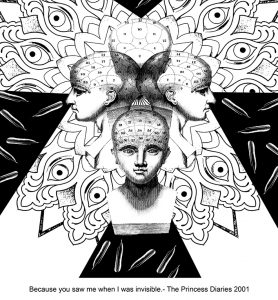 This one kind of worked for me since the eyes on the pattern could be seen very clearly and the background does not clash with the faces. 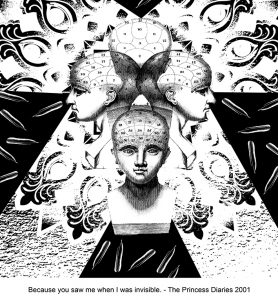 I also liked this grainy effect that seems to fade away and not too bold. It works better than the previous one as it does give off a feeling that there is a background, yet a subtle one that does not take away the attention from the faces. 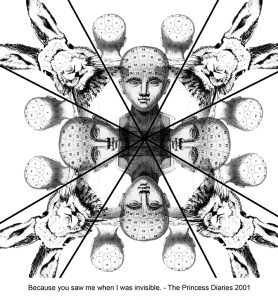 I tried experimenting the faces with other elements such the rabbit. I feel that the rabbit appears to be the most timid out of all animals which is linked to the idea of invisibility. The lines are also added to emphasize on the spreading movement of the mandala but I felt the lines were also at the same time, too much. Some of the heads were facing the viewer and turned back to show the idea of seeing and ignoring. 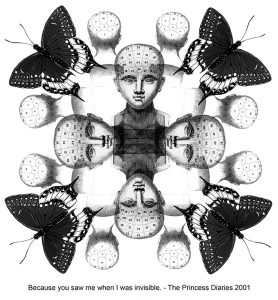 I tried to change the subject matter to something more obvious and beautiful like the butterfly, so that the message that even something as beautiful as the butterfly is overlooked by the turned heads. I also eliminated the lines as I felt that they were a bit too much. 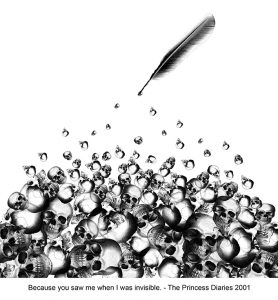 I used skulls that are facing the viewer to show the idea of ” saw me when I was invisible”. The invisible part comes in the form of a feather that acts as the emphasis, that is why I placed the feather to be on top. The skulls are concentrated at the bottom and then start to get smaller and eventually diminish to put emphasis on the feather even further. 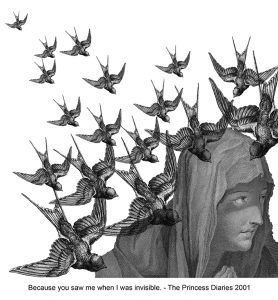 This is to portray the act of someone being noticed (shown by the birds) even when her head is facing away. 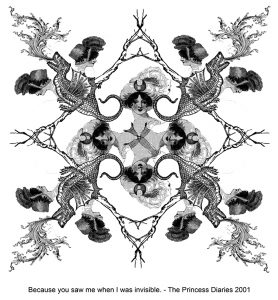 I wanted to recreate another mandala as I’m not really happy with the previous one I did. This time, I included dragons. Dragons to show that something so huge and powerful that breathe fire, could also be overlooked by the female heads. This is to portray the irony of the quote. The elements of the mandala that are going outwards also have complementary textures; the soft edges of the dragons’ flames compared to the sharp edges of the twigs to have a variety of textures.

The Queen is never late. Everyone else is simply early. – The Princess Diaries 2001

The idea of time revolving around the Queen.

The Queen being the main emphasis in the foreground shows her dominance when it comes to matters regarding time. With the consideration of sizes, the clock and the 6 commoners pale in size, as if of little significance and simply waiting for the Queen.

Because you saw me when I was invisible. – The Princess Diaries 2001

The faces are gazing at something as light and invisible as the feathers, portraying the idea of seeing something invisible.

The irony that something as powerful and significant as the fire-breathing dragons are still being overlooked by the nonchalant heads. 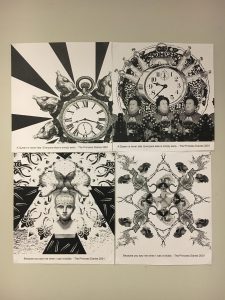 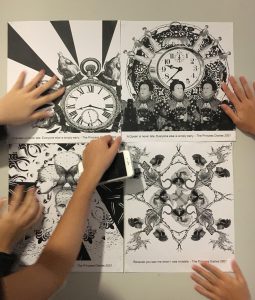