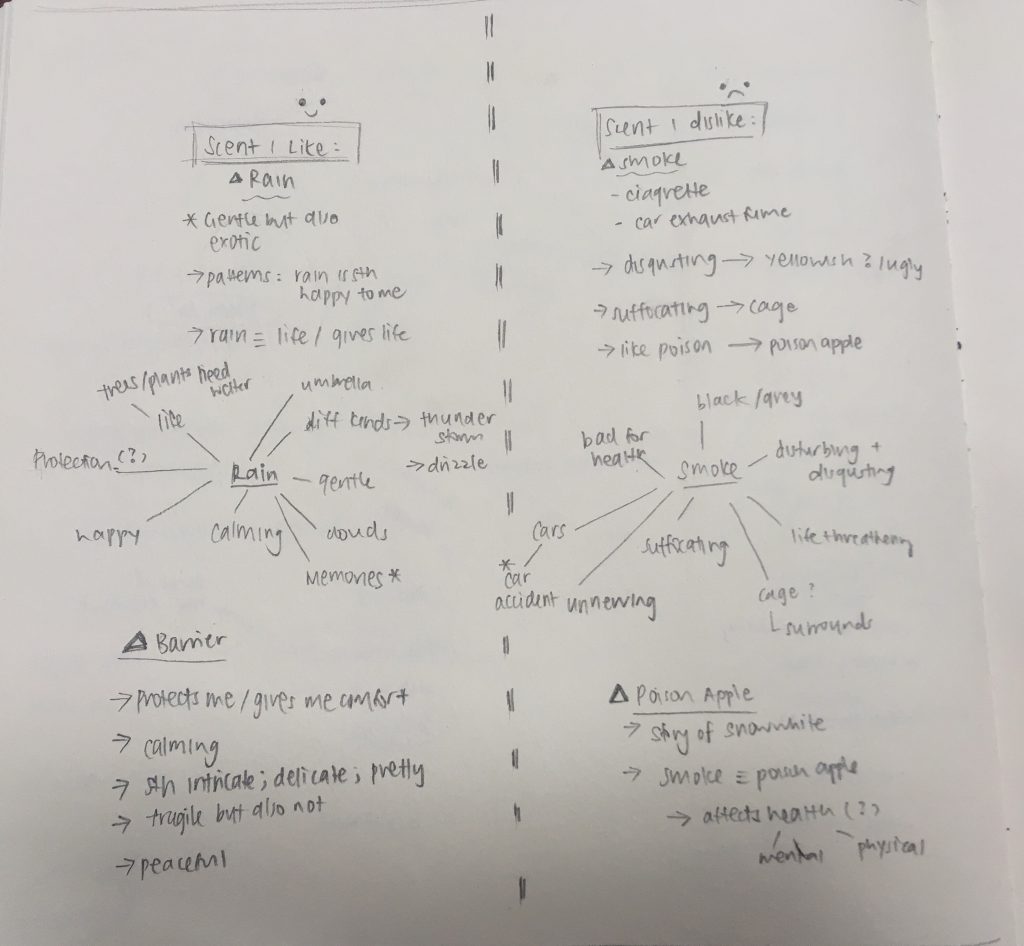 Initially, the 2 scents I wanted to use was tea and old coffee. However, as I explored my concept I realized that there were 2 other scents that I could connect to more personally. Therefore I decided to change my scent into Rain and Smoke. However, I still made a model for tea and old coffee. It was just that I thought the model for Rain and Smoke had a much stronger concept.

Plastic is something that is difficult to control. It is unpredictable in a sense that the plastic may react differently even if the intensity of heat applied is the same. In addition, when the plastic is heated up, it will be very hot. And it’s dangerous to touch it even when I’m wearing gloves (I think, better safe than sorry) Precaution has to be taken after all. I must say I dislike the fumes that are released when the plastic gets heated. That adds another scent to the list of “scents I dislike” now.

Here are some of my process: 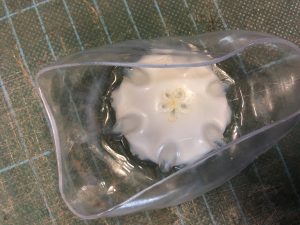 I cut off the bottom of the plastic bottle and blew at it using a hot gun. After that, I used the soldering tool to cut a flower in the middle. It looks like a coral for some reason. Or a sea creature that sits at the bottom of the ocean. I did not expect the plastic to turn white so this was really interesting. 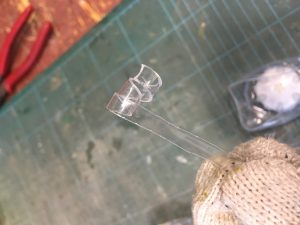 I realized when using the hot gun on long strips they will twist and curl. They remind me of candies. Twisted sour candies. 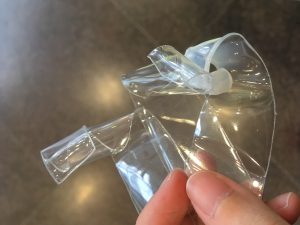 Playing with the hot gun. On the right, I blew at it using the hot gun for a longer period of time, so it turned white. The texture appeared slightly different as well. 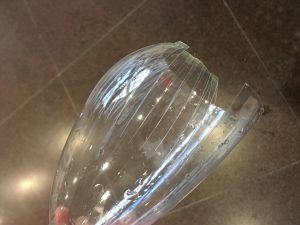 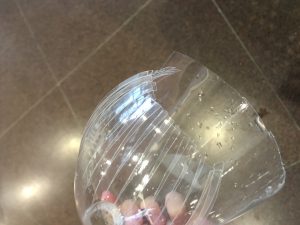 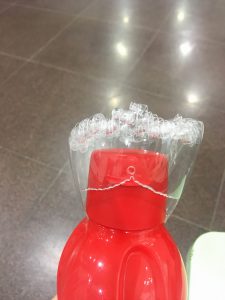 I made a crown for fun. Some of my friends commented that it looked like a dress. 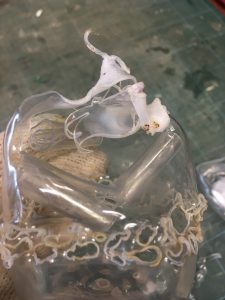 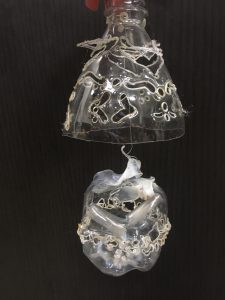 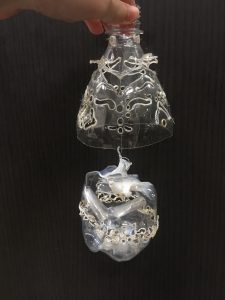 It’s an ugly scent. It gives me headaches, I hate it.

I lost a senior from a hit and run incident when I was 8years old. What was worse is that I was there when it happened. It traumatized me since young. It was something I could never shake off easily. My friends and I blamed ourselves for it. Anyway, I hate car exhaust fumes. They smell terrible too.

A scent that calms me and washes smoke away. I find comfort in the rain. Rain is something happy to me. I think raindrops have conversations when I was a kid. I really like watching the raindrops dance around on roofs and sliding down windows.

The portion that appears like an apple represents smoke. Like a cage, it suffocates me and makes me uncomfortable. The white curls resemble the smoke’s movement as well as the top note. The irregular band of holes represents decomposition. In a sense, it is a poison apple because once you eat it, your health will be affected. Smoke affects our health and I wanted to show that in my model.

The upper part of the model is to represent a barrier. Once I pull it down, it covers the apple, which represents the fact that rain protects me from the smoke, or it gets rid of it for me. The carvings on the plastic represent the liveliness I see when it rains. The life of raindrops (?)

My teacher and friends think that the carvings on the plastic bottle look like faces so it made it comical. I never thought about it that way haha.

Then apple was something that could stand on its own. I do agree with this comment. It was how I felt too. I had issues trying to combine the two scents together, and I suffered trying to do it too. 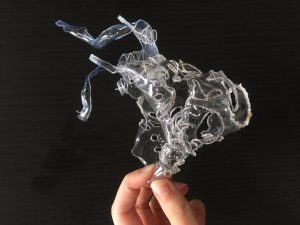 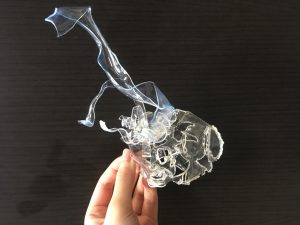 A comforting scent that calms me. The scent of tea allows me to relax. I oftne drink it when I am stressed. For instance, herbal tea. It lingers and stays. Sometimes it reminds me of a warm breeze.

A rich scent that is overwhelming. Reminds me of the ground for some reasons. Which reminded me of the fact that I always fall down and get myself injured. Just the other day I fell from a friend’s penny board while I was playing with it. I fell on my elbow and couldn’t move it for some time. Now I have recovered so it does not really affect me anymore. I don’t get it myself but I don’t really like coffee since it reminds me of how clumsy I am. It’s not becuase I’m against coffee or anything. I like coffee but sometimes the scent is too much. Sometimes it’s like a thick and heavy scarf your grandmother forced you to wear out on a date or something. Maybe I’m exaggerating.

Tea is something that clears my mind therefore I decided to leave it looking clean. I used a light blue colour plastic bottle to add the idea of clarity. The swirling and twists are to highlight the top and middle note of the aroma of tea. The scent of coffee is illustrated using a deformed piece of plastic with engravings. It is to illustrate the richness of coffee. The deformed shape is to highlight the fact that the aroma of coffee can be overwhelming.

I was surprised that my teacher liked this model. I was not exactly impressed by my own work but I did not dislike it either. I think I could have worked on my concept more.