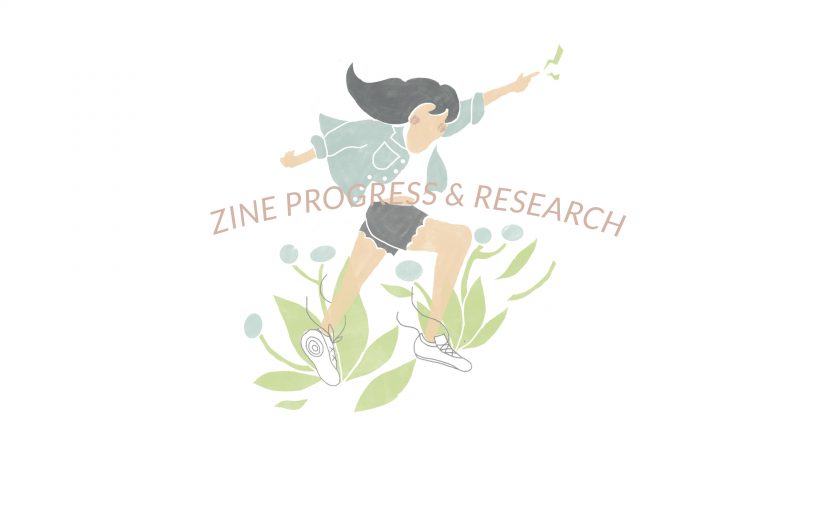 Zines are usually:
-self published
-self circulated
-often inexpensive or free
-topics too controversial or niche for mainstream
-independent publishing
-not about rules or knowledge but about freedom and power
-not supposed to appeal to everyone. It is exclusive.

These descriptions inspired me to create a zine that is personal and exclusive to me. I decided to create a guide to a locale that shows the personal experiences I had there. The zine will be like an illustration album of what I experienced.

The location I chose was City Hall.  I decided to explore the areas that are in a walkable distance from the City Hall MRT station.

Here are some of the rules that I kept in mind when I was doing my research of the locale. 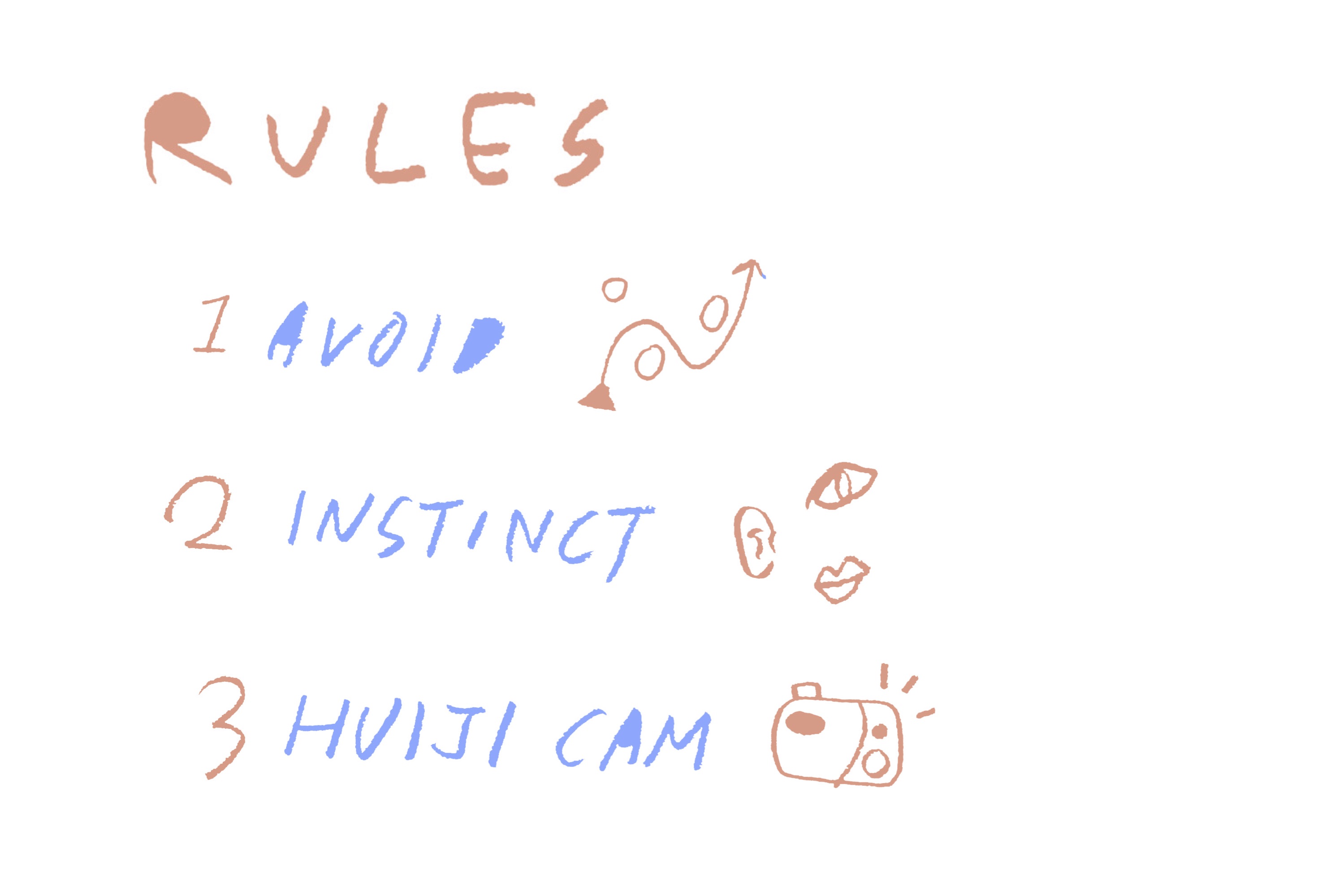 Rule number one: avoid. City Hall is a bustling area well known for shopping and its many museums. I wanted to show that City Hall had more to it than that. So I decided to try and avoid the main locations people would usually go to.

Rule number two: instinct. There are two types of people when it comes to traveling. First, the ones who plan months and weeks before a trip and has an excel sheet with all the locations and prices. Second, the ones who plan on the plane ride. I am more of the latter. To make my experience more realistic and true to myself, I decided to go as unplanned as possible and follow my instincts. I will go around the area without a plan or schedule. I will eat or rest or decide to skip some locations I had in mind if I wanted to at the moment.

Rule number three: use the Huiji camera app. It has become so easy to click as many photographs you want with your phone. I wanted to go back to the analog film style where you would carefully choose your photographs because there is a limit to how many you can take. I tried to limit myself to taking only 3 photographs in each location so I will only capture the most precious moments.

The first location I went to was The Adelphi which is a building of heaven for audiophiles.

The first impression I had was ‘orderly messy’. There was so many stores in straight rows. But the items being sold are usually vinyls, record players, vintage cameras, camera analog films, good quality speakers, and so on that was displayed in a orderly mess. Both battered and old vinyls were stacked neatly in crates or shelves. However, there were crates and shelves everywhere.

There were so many stores that it felt like a maze to me.

The laid back vibe in the building was noticeable as well. Some of the shop owners and customers seemed to be quite close to each other. It seemed to be a tight knit community where you could exchange records or where regulars would get a discount or secret notice when the record they have been looking for comes in.

There were 4 main record shops that was memorable to me. 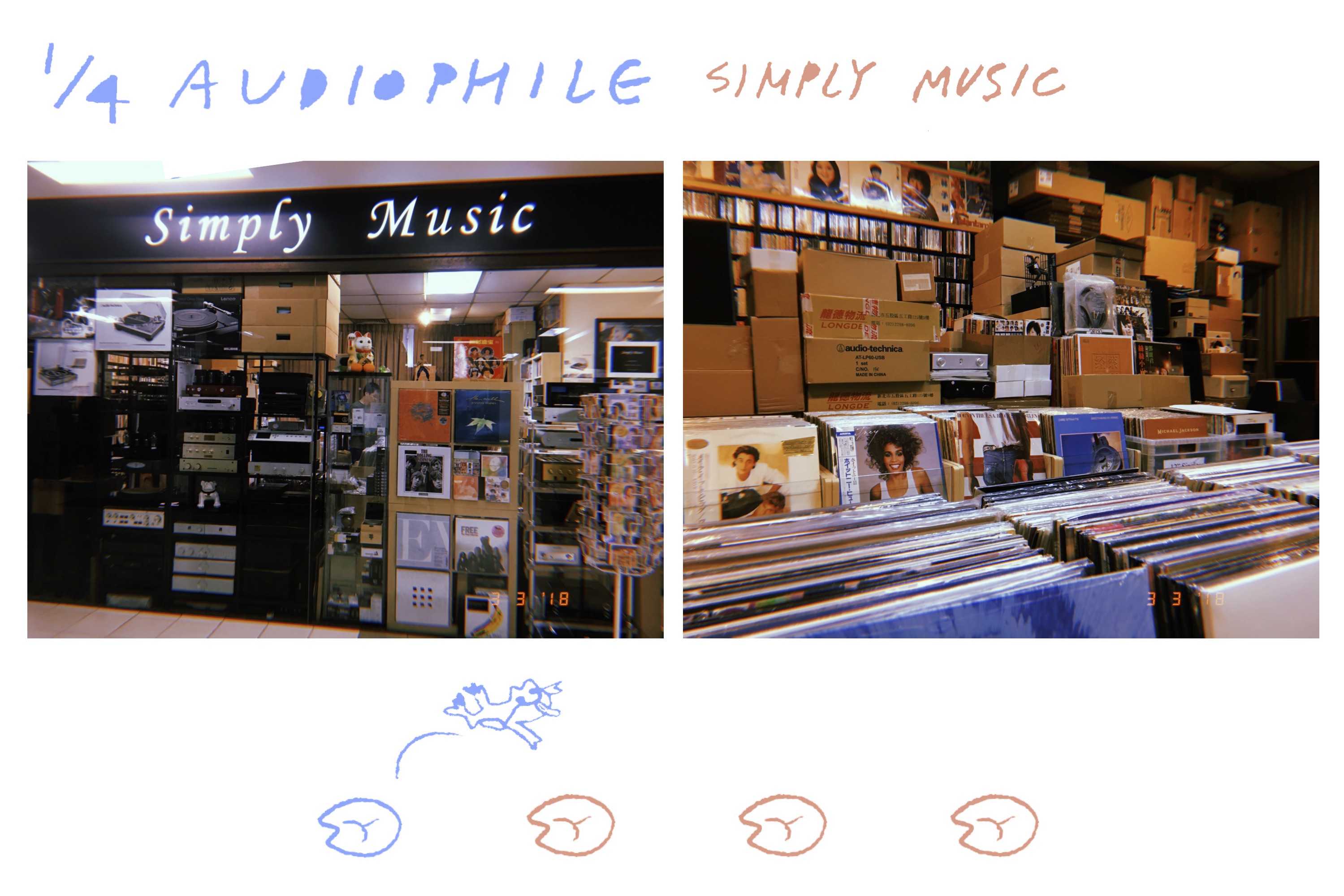 They had a moderate mixture of both old and new vinyls. Example of the old vinyls that could be found here was mostly old movie soundtracks like the OST for ‘My Fair Lady’. One of the newer vinyls that I saw here was the ‘Divide’ album by Ed Sheeran. 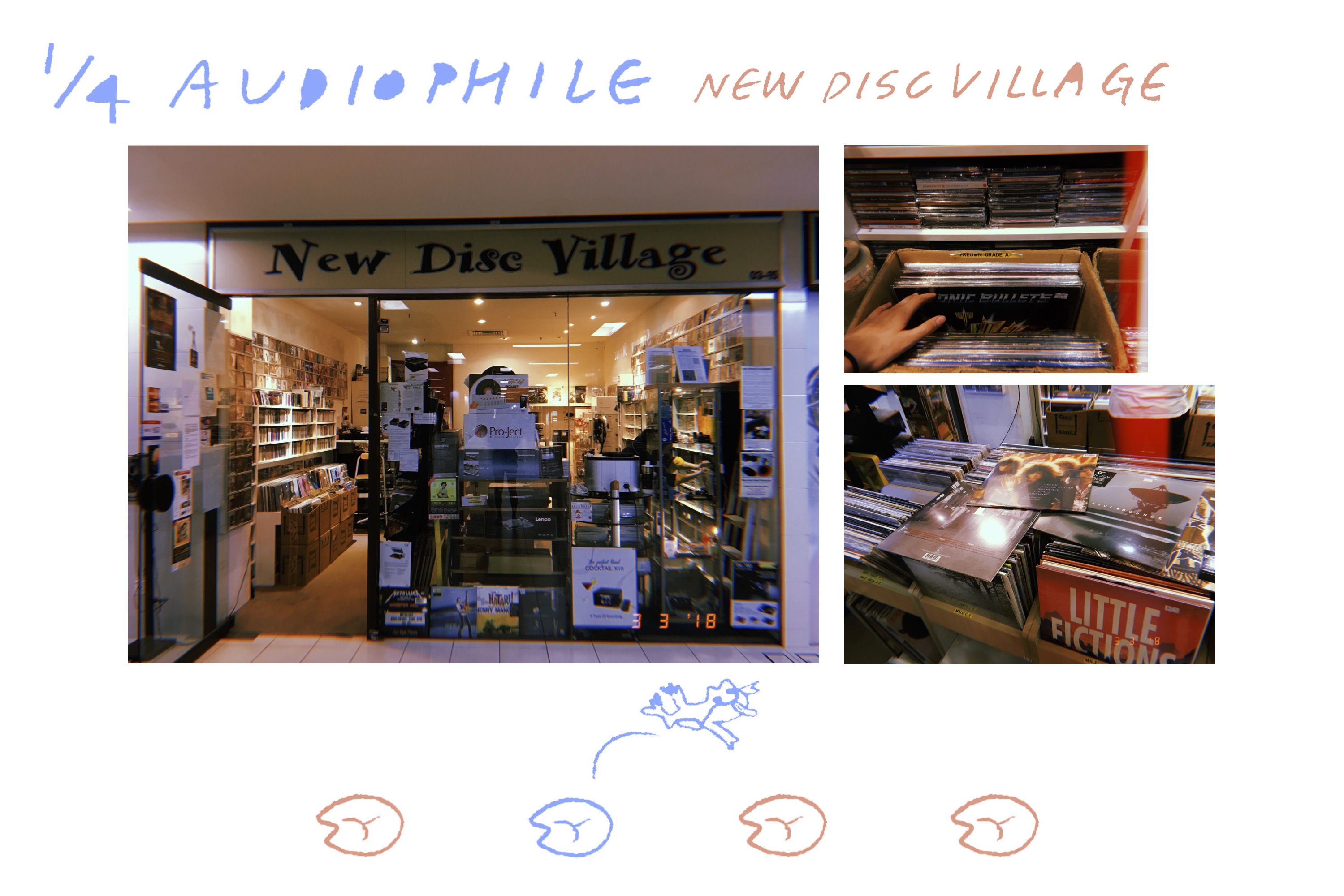 The best memory I have of this shop was how the seemingly grumpy and uninterested shop owner wordlessly appeared and placed 3 Bon Jovi Vinyls in front of me and my friend when we were looking for them. 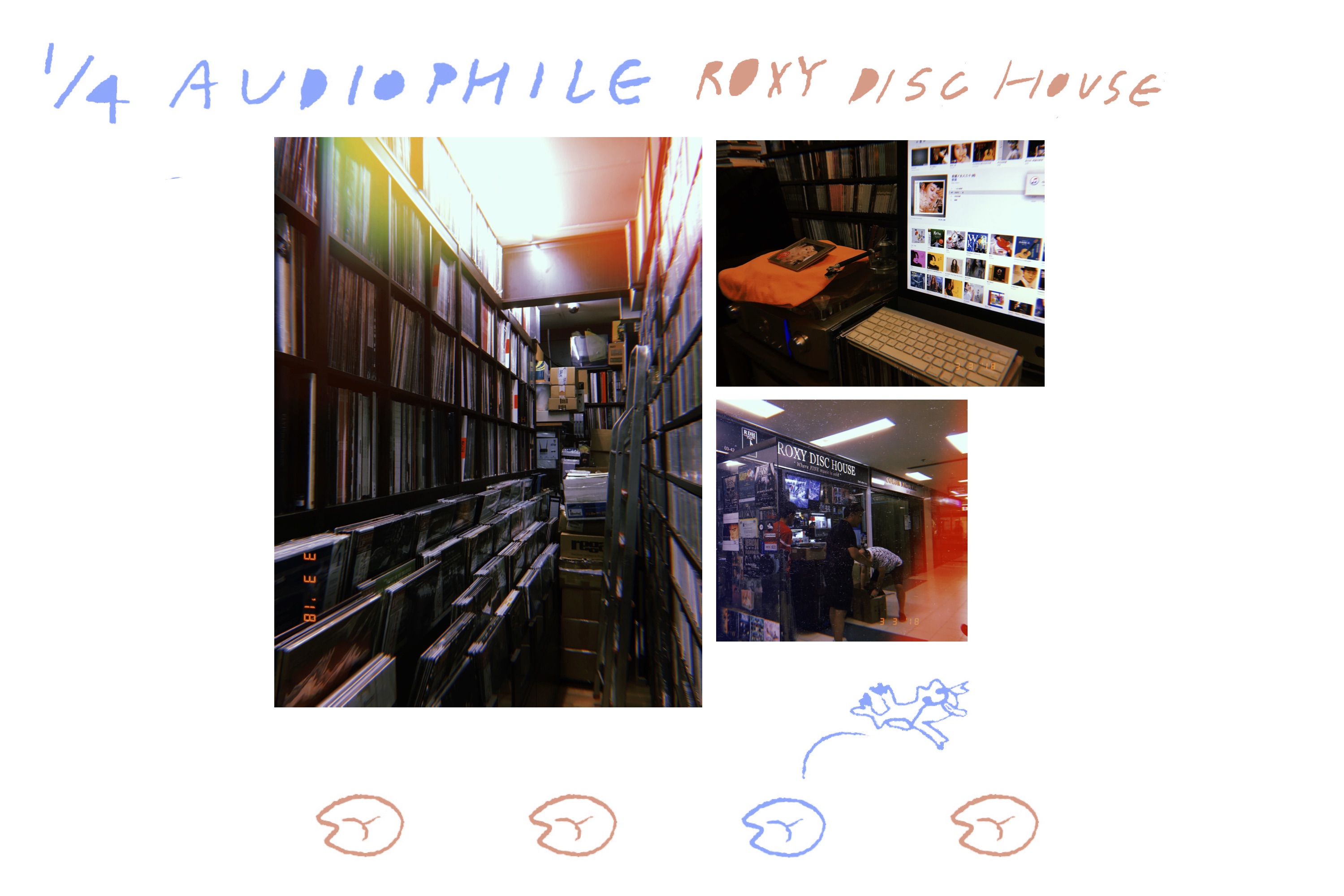 This shop was a bit different from others. While most shops had mostly English oldies, this shop had more Asian oldies than English. The Asian oldies ranged from Japanese, Chinese, and even some Korean.

Also unlike the other shops that generally used crates and short shelves, this store was full of long shelves that reached the ceilings.

It was really interesting to see the juxtaposition of old and new as well. Surrounded by old vinyls and CDs were a modern Mac laptop better than the one I had and great speakers to play Japanese music. 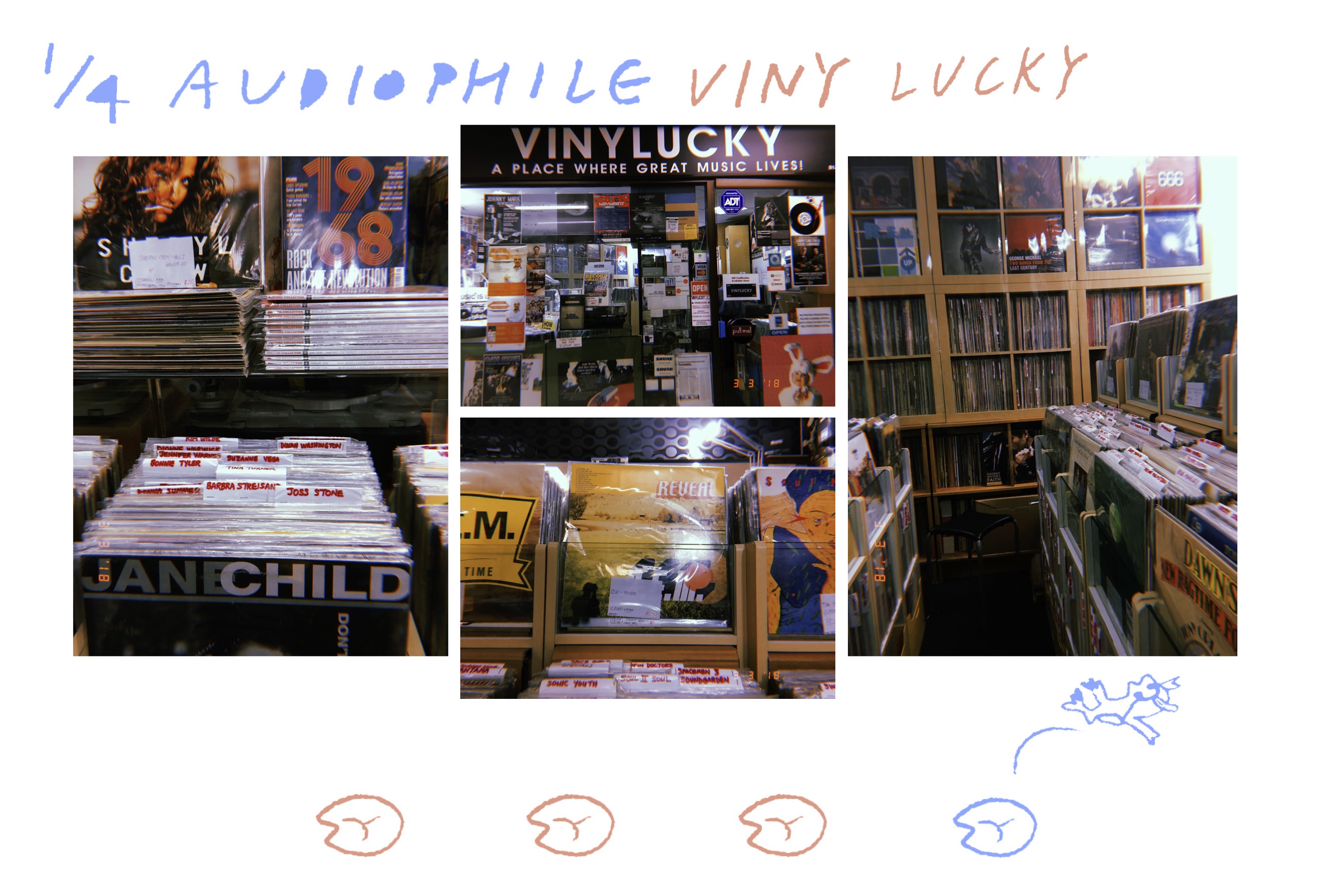 This shop had the most diverse collection of genres and music. Also, it was organized with tabs that had the specific names of each artist so it was easy to go through the vinyls. 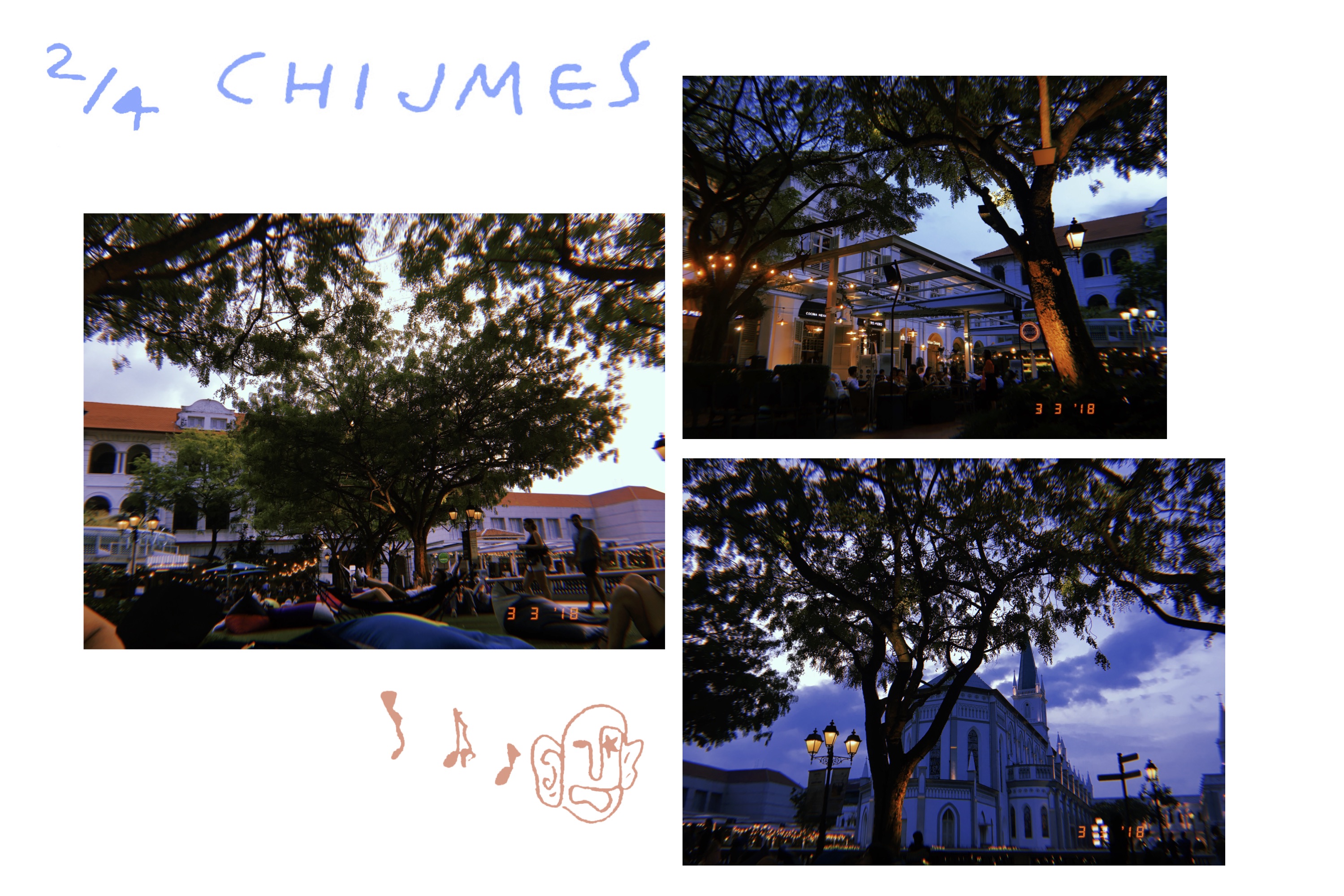 After the long walk in Adelphi we decided to chill at Chijmes. We rested on the bean bags and watched the sunset. The small fairy lights, fluorescent lights, music playing from nearby shops. They all helped set the mood. We were lucky enough to catch a live performance as well. 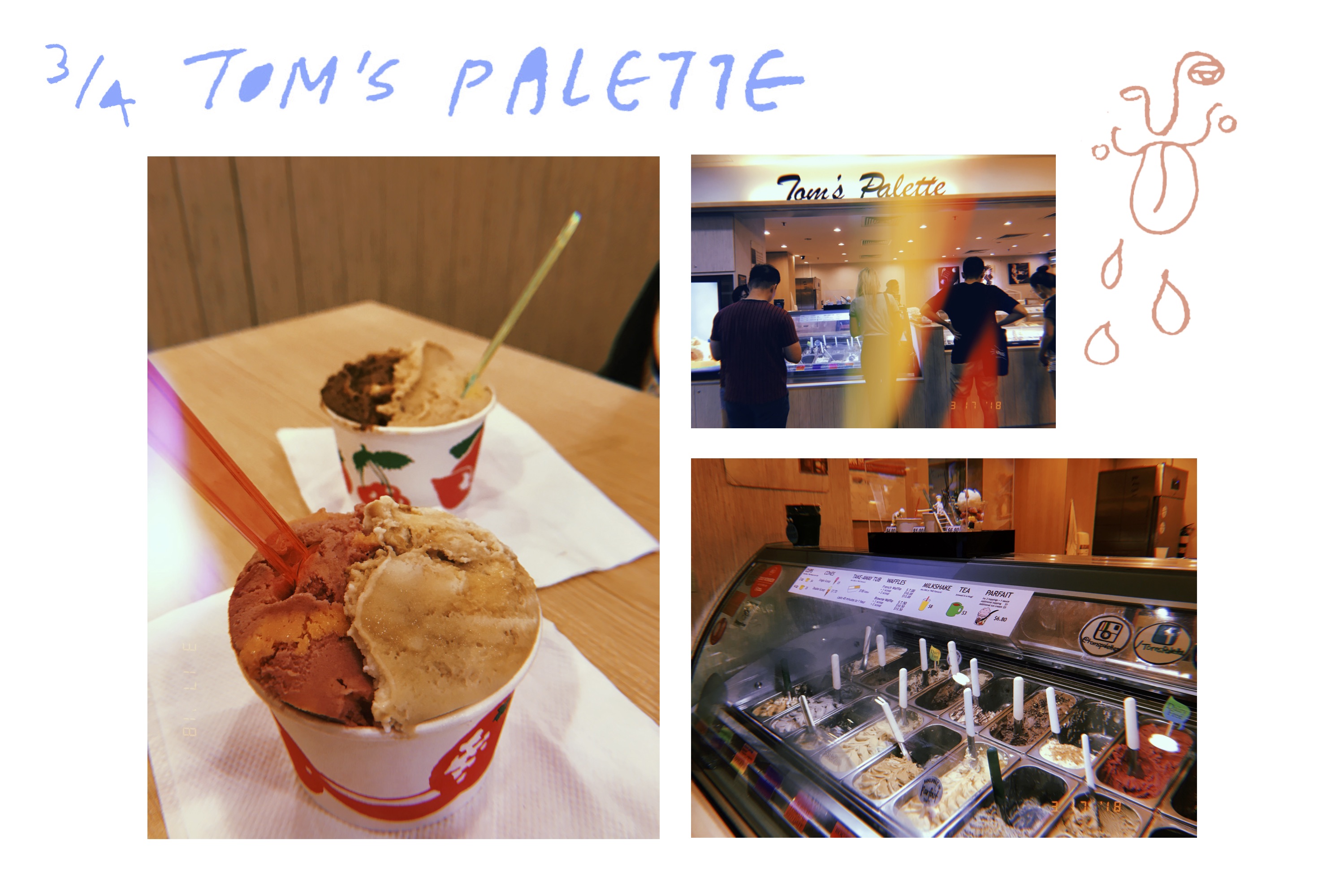 For refreshments we went to Tom’s Palette which is a special ice cream store. They have very diverse ice cream flavors. One example is salted egg yolk. 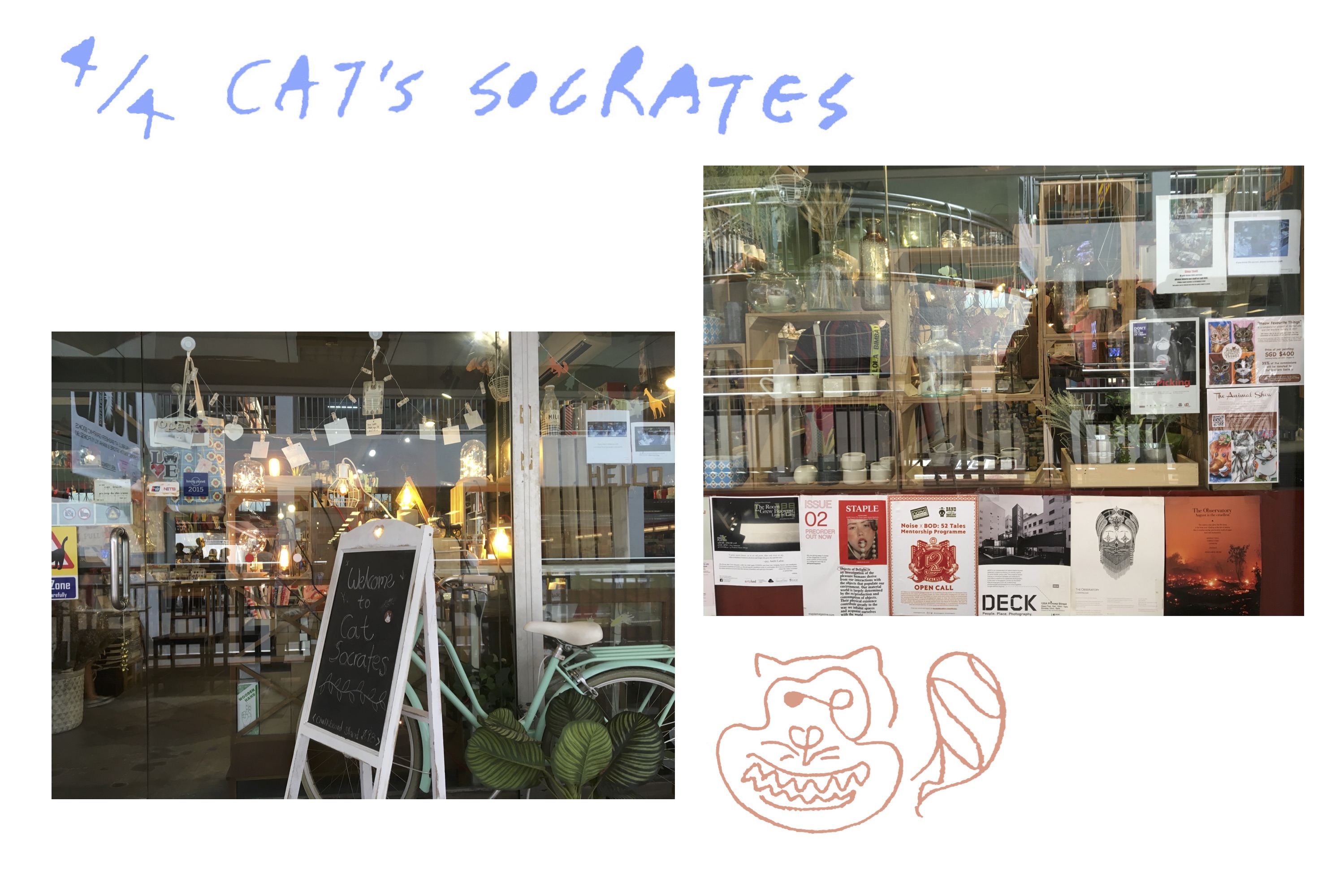 Cat’s Socrates is located near the Bugis Art Friend that ADM students are probably very familiar with. I liked the location of Cat’s Socrates because it reminds me of how venturing out of your usual path helps you discover new things.

Cat’s Socrates felt like a melting pot of Tiong Bahru. They had all the badges, pins, patches, ceramics, indie books, children’s books, fairy lights, and so on. They even had a cat.

I wanted to use as minimal text as possible. I wanted to communicate using visuals so it’s easier to be in the same mood and vibe as I was when I was in the situation.

I will use straight rigid boxes for some the locations and some more free flowing ones for other locations depending on its vibes. 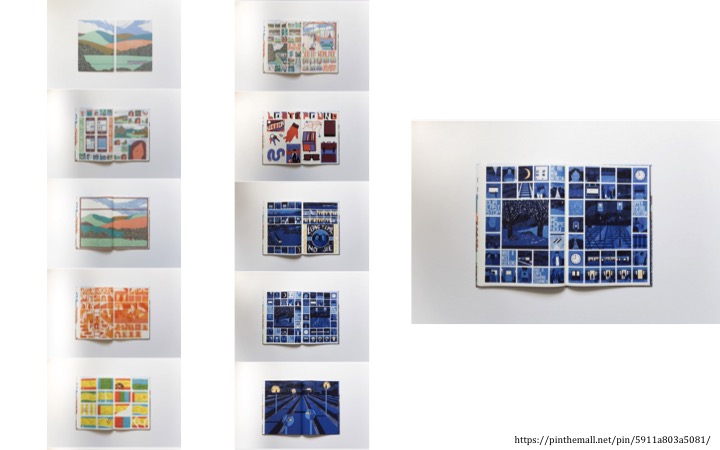 For the photographs I would like to photoshop them into polaroids to match the analog vibes. Plus the frame will help it fit into the layout of the comic book style. 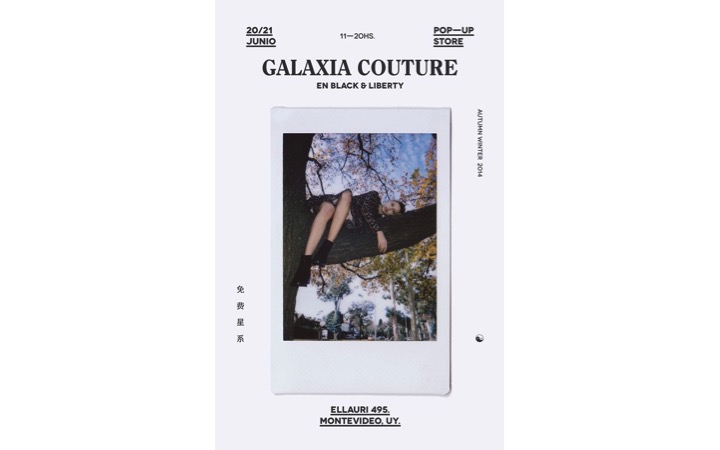 As I used the Huiji camera app which is inspired by analog film, I decided it was only right to use polaroids. 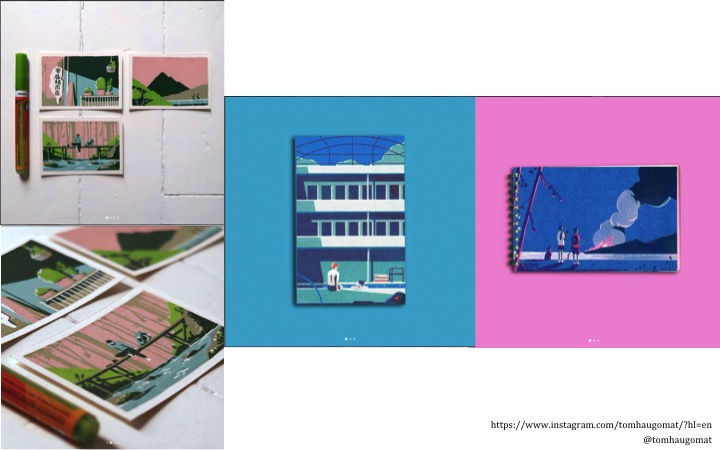 I really admire his illustrations. He usually illustrates wide sceneries with people in them. They are simple but yet so expressive. I think this is due to two main reasons. Firstly, his color palettes helps set the peaceful mood. 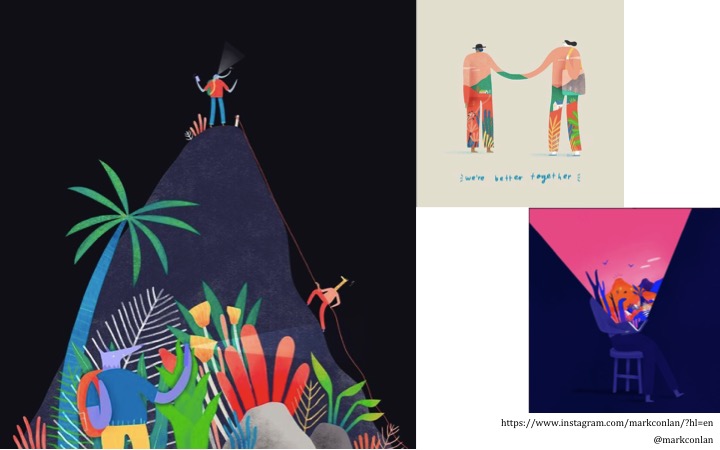 Like Haugomat, Conlan’s illustration has the simplistic vector style as well. But it differs in how his illustrations tend to show more abstract ideas rather than sceneries. They are expressive in a different way.

I wanted the illustrations in my zine to look like quick sketches or doodles in a travel journal. Like the inspiration artists, it should capture the essence and mood while being simplistic rather than elaborate. I also wanted to use a limited color palette. The illustrations will only be created using 3 to 4 colors for a sense of unity. As a result, this could end up in using an unrealistic color to represent something.

I also planned to introduce a different color palette for each location. This will help viewers feel like they are entering a new location like I am.

Different color theories were taken into consideration for each location as well. 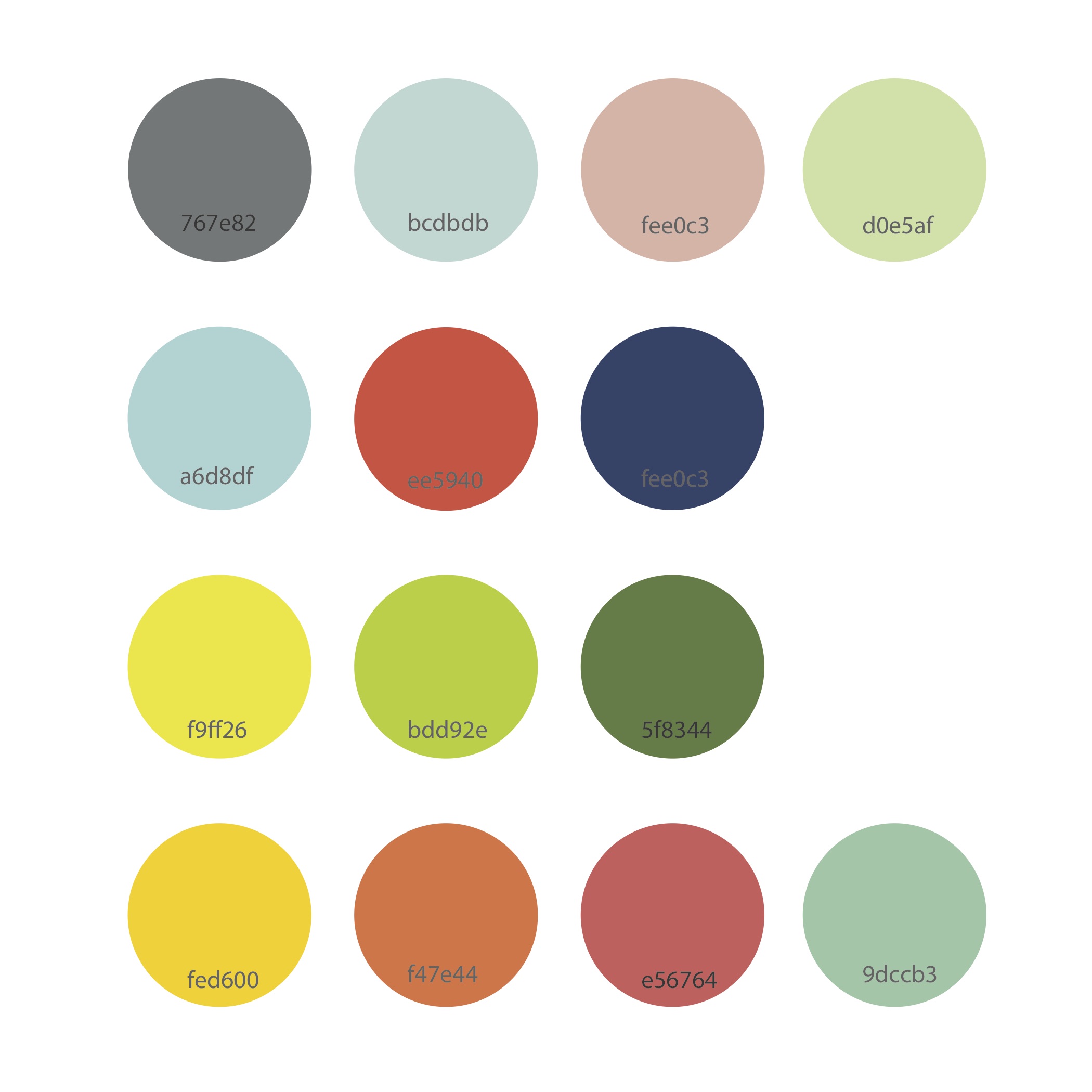 For instance, the 3rd row that consists of the yellow, light green, and dark green is for the 2nd spread. The 2nd spread shows the different stuff I found in the Adelphi record stores. Overall it was very calming to be in the record stores. As a result I used analogous colors. The harmony between the colors gives a balanced mood that helps create the ambience I felt when I was at the record stores.

Despite the various locations I have actually been to, I ended up using only some of them.

For my first encounter with Adelphi I decided to talk about how it seemed like a maze to me and I was overwhelmed by it. There were so many stores and hallways that I was not sure where to start. The fact that all the stores were selling similar items; records, did not help me distinguish between all of them. I wanted to talk about how lucky I felt to have my friend guide me through the place. So I illustrated how the simple structure of Adelphi seemed like a maze to me, difference between people who have a sense of direction and those who do not, and a representative image of my friend guiding me through the place. 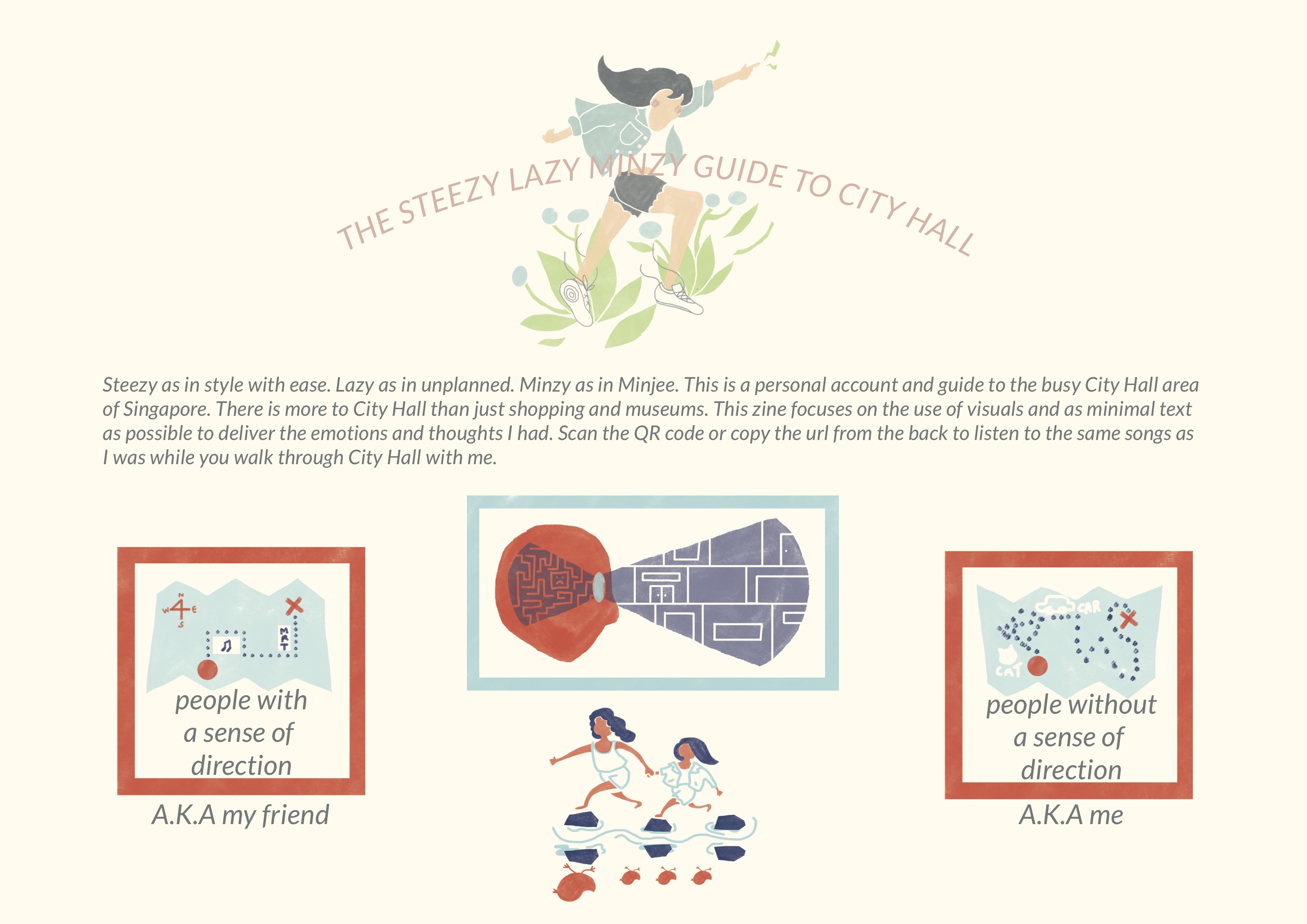 The illustration of my friend leading me through Adelphi is one my favorites. It is the bottom one in the layout shown above. The person leading the other in the front is my friend. She is depicted bigger than me to exaggerate the fact that she is in control of finding the way. I also illustrated the actual outfits we were wearing that day. We are shown to be jumping over stones. The reflection on the other side shows her as a mother duck and me as one of the baby chicks to represent how I felt when I was following her.

For the 2nd spread I wanted to show all the objects I saw in Adelphi spread around. Personally, Adelphi record stores were like a treasure hunt where you had to look around to find stuff so I wanted viewers to have the same experience. Hence, the reason for the organization in the spread. 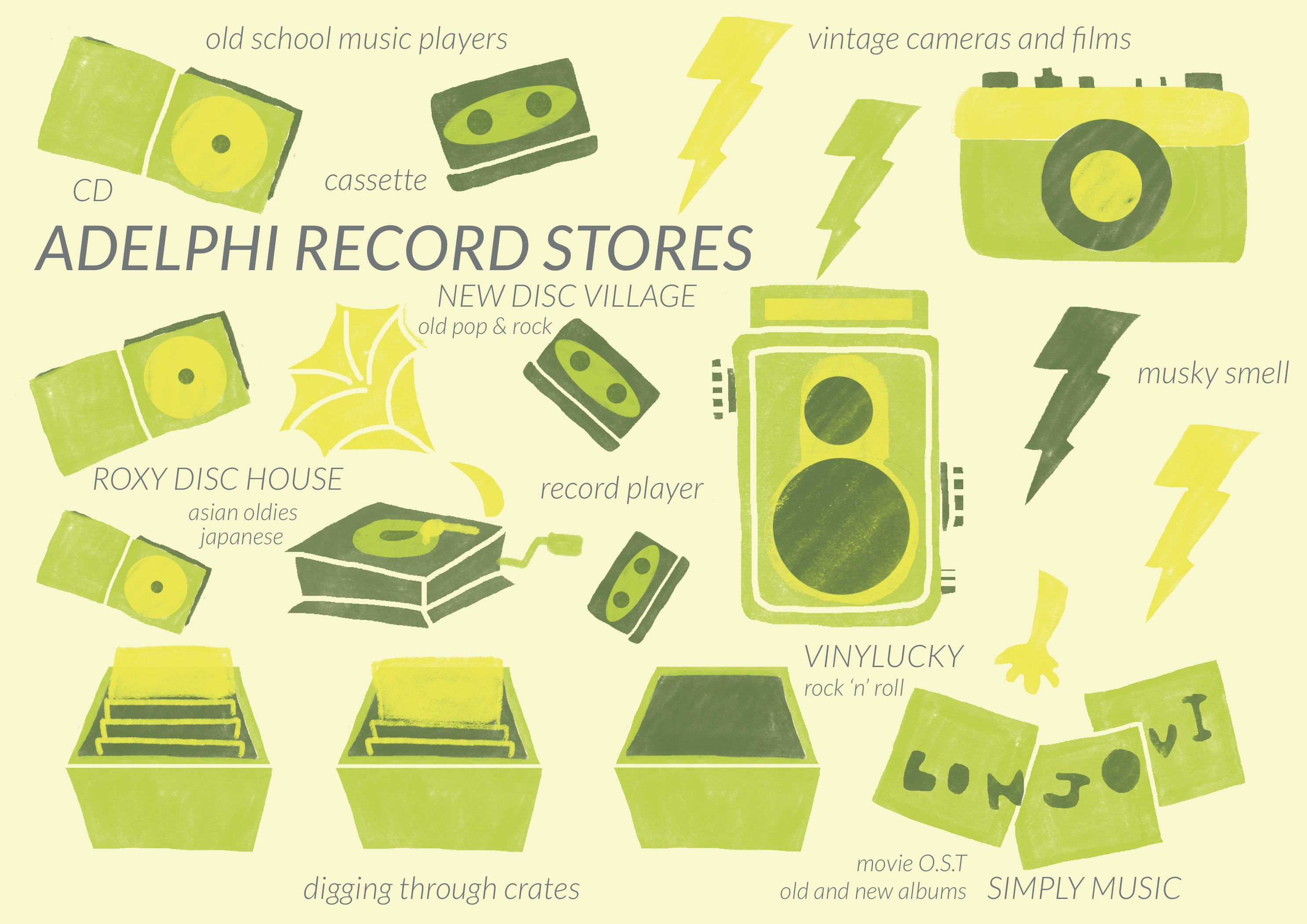 For the last spread I used polka dots for an energetic and happy introduction to Tom’s Palette ice cream store because that was how I felt when I saw all the choices they had. 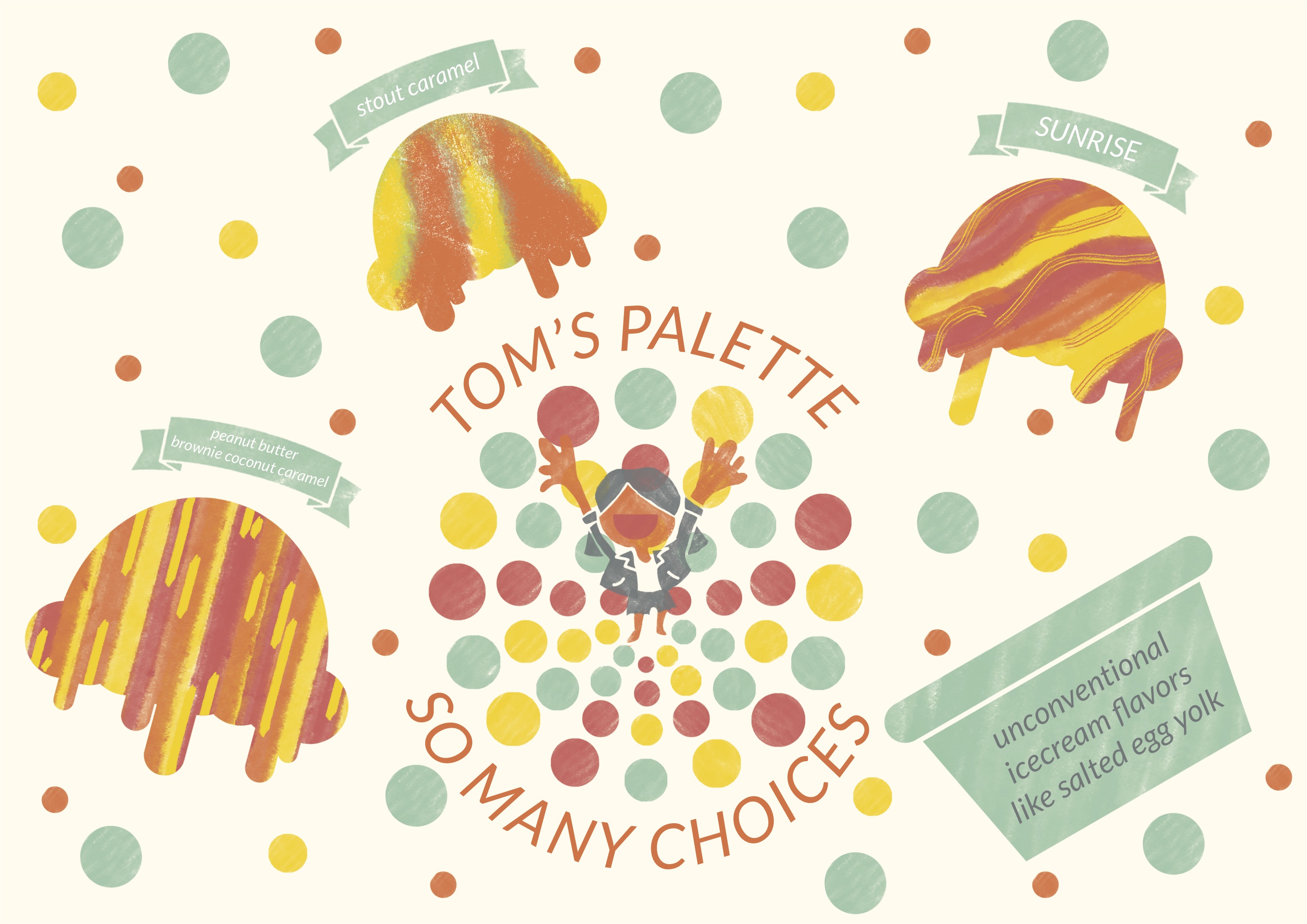 Initially I have planned to add the photographs I took with the Huiji camera app. They will be photoshopped as polaroids to add onto the analog vintage vibe. 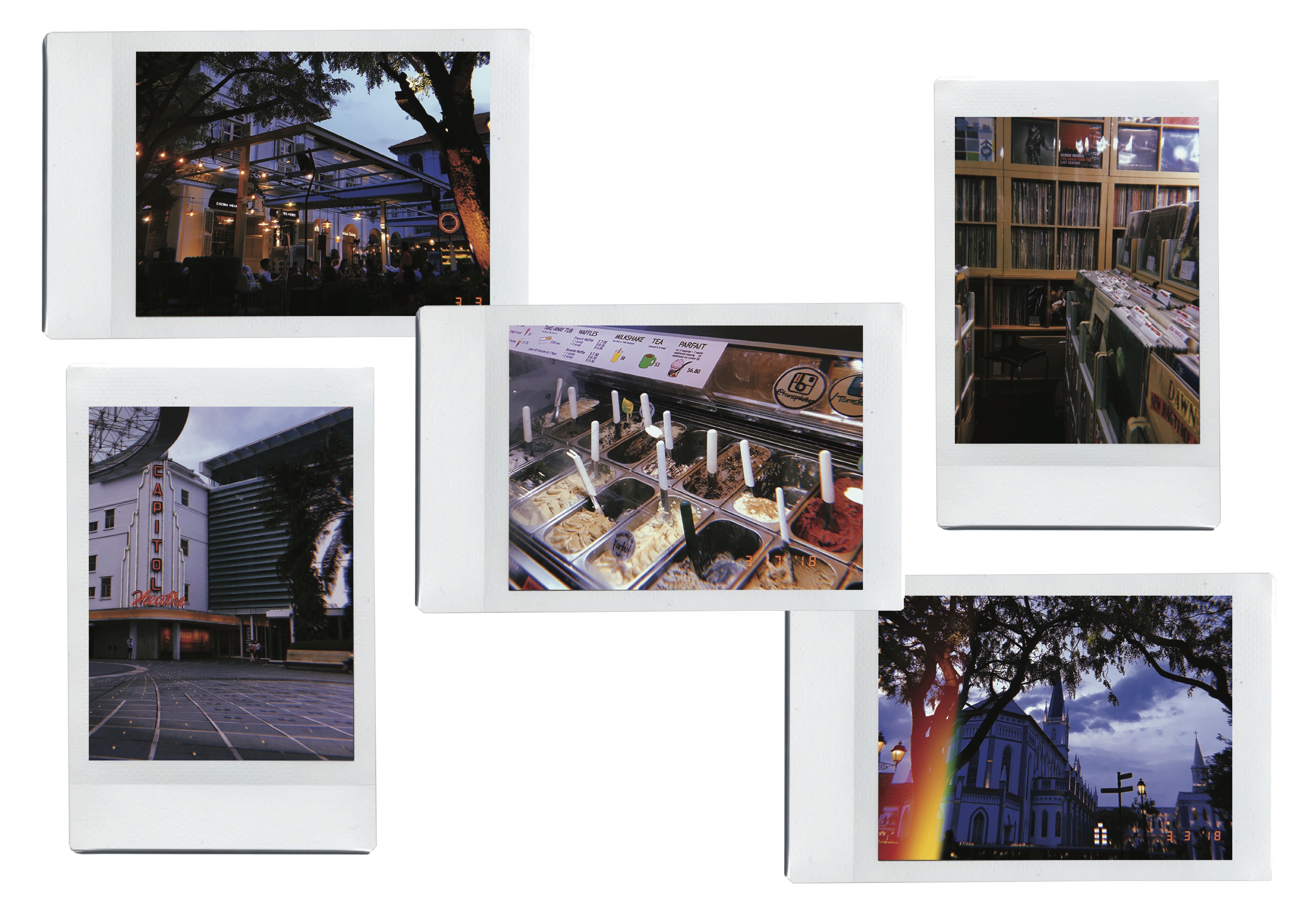 So I measured the size of actual polaroids so that when it was printed it will look realistic. When I placed the photographs on the zine, however, they looked too rigid and out of place in comparison to the illustrations. I think this was for two main reasons. Firstly, the color palettes did not match up so overall it looked like two different things going on. For the illustrations I usually used pastel like colors. The photographs, on the other hand, were vintage film like dark colors. Secondly, there was no interaction between the photographs and illustrations. For instance, the two might have looked more natural together if there were illustrations drawn on the polaroids or scribbles on it. 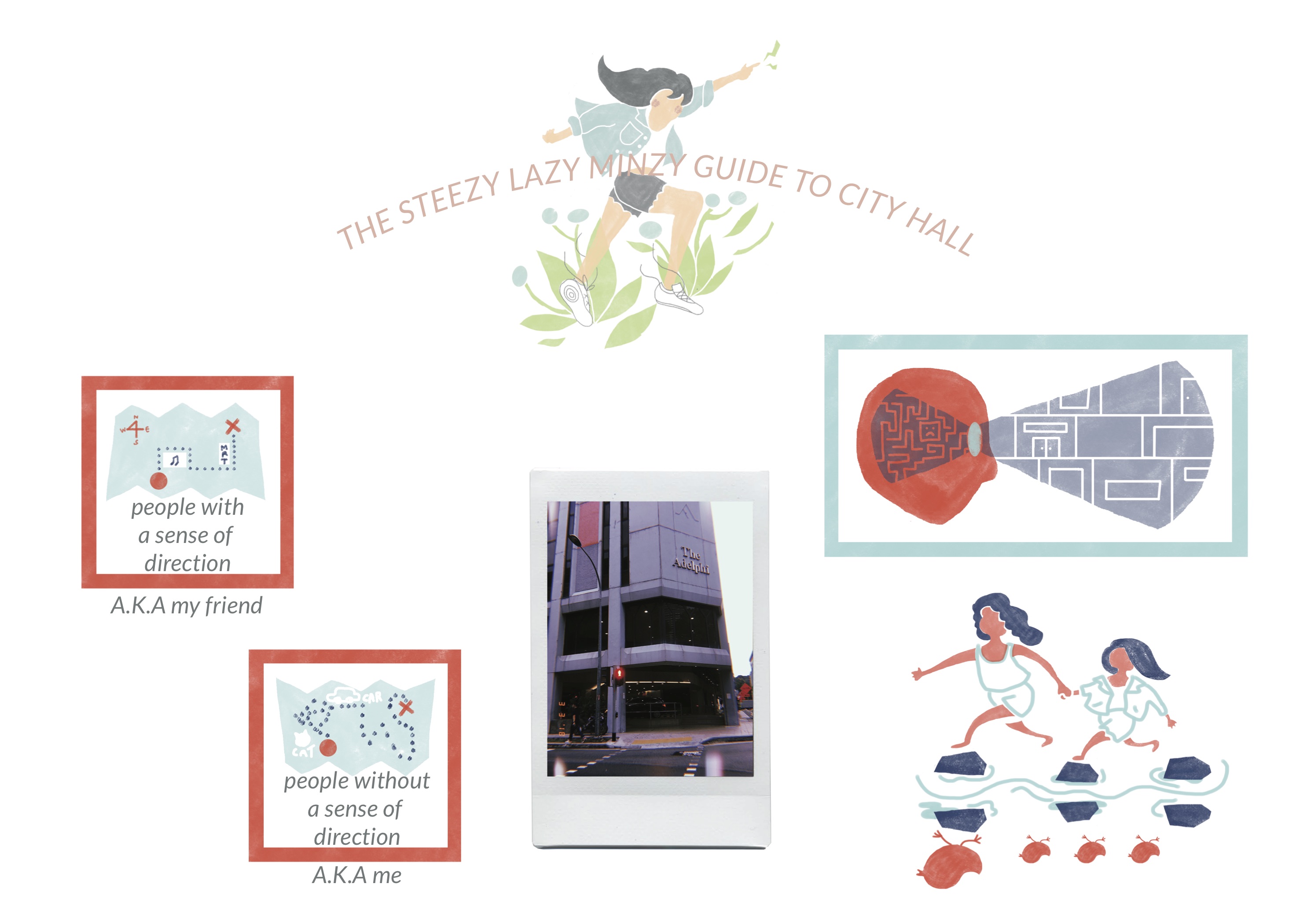 As a result, I decided to focus on the illustrations and not use the photographs. I think this helped me think outside the box and straight lines and have pages that are more free flowing on spreads 2 and 3.

I felt like music was a big part of this journey to record shop and to put in a personal touch to the zine because I love music. Also, it would help the audience to feel the same ambience I was feeling through a set playlist. I was interested in creating a new experience where the audience will be listening to an audio while reading. Below is the playlist I created for my zine.

To help the audience access the playlist, I created and added the QR code to the link at the back of the zine. I added a shortened URL as well for those who might be having trouble accessing the QR code. 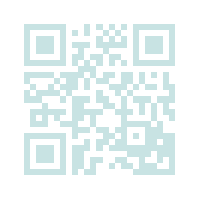