the father of video art and a leading Fluxus, video, performance, digital artist. He is a significant figure that redefine art in a new form, technology. His contribution and construction of foundation of multi-media art is undoubtable. Yet, his contribution is not really recognised in today’s world. When asking around whether people knows Nam June Paik, there is a high chance that people would say no. Therefore, I would like to introduce this amazing influential multi-media artist here!

This video shows how the Robot K-456 perform in front of public on the street of New York in 1965.

The Robot K-456 is Paik’s first automated life-size robot, created with the assistance of a Japanese electronics engineer Shuya Abe. This Robot is able to walk and talk and was shown in a series of performance-based projects in New York City and Germany through the end of the 1960s.

Paik built this work to initiate street actions and interaction with people around. He mentions that: ‘I imagined it would meet people on the street and give them a split-second surprise. Like a sudden shower.’ and explained that “I wanted it to kick you and then go on. It was a street-music piece.”

The action of being kicked by the robot was to involve the audience into the performance. It is not just an artwork performance but a collaborative public performance art. 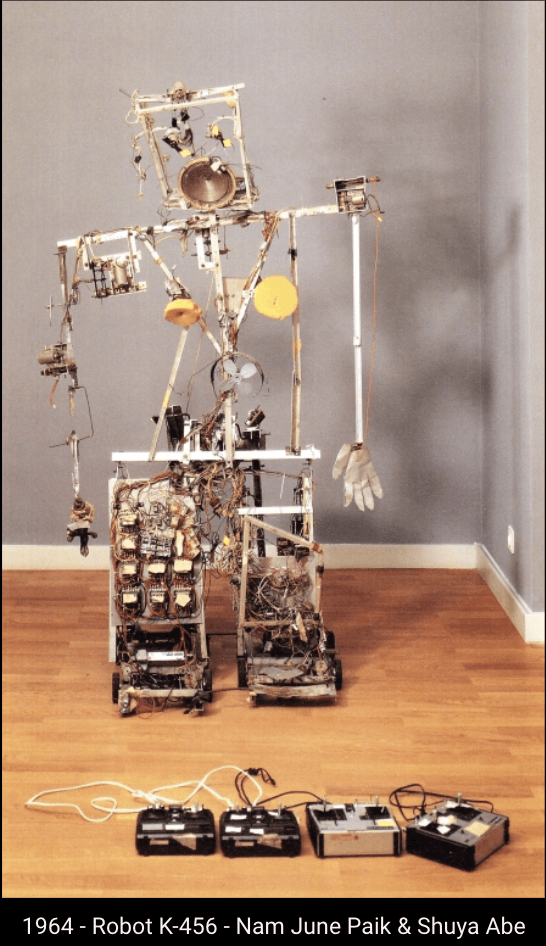 Robot K456 is built to walk, move his arms and legs and most importantly interact with people. It also has a digestive track which defecated beans on command. It can “talk” by playing speeches.

It is made with some electronic components including steel, aluminum, fabric, rubber, wires, and foam rubber. It was outfitted with a rubber breast paddings (cups from Paik’s sister’s bra) , a tin-foil plate as a hat, and an electric fan as a navel. It is made out of original and simple material which you can find at home.

To explain more about it, it is a human-sized, 20-channel radio-controlled robot with a square head, aluminum-pole arms, rubber breast paddings, and oversized rectangular feet with wheels. His mouth is equipped with a tape recorder which originally played John F. Kennedy’s 1961 public speech

Actually, with the technological advance at that time, I think Paik and Shuya could polish the robot much more better in terms of appearance and material used. I found out that Paik didn’t want his robot to work “too well“, but instead handmade and raw. There is no attempt to hide its cables and electronic parts, which shows his sense of humor by making this humanized robot more funny. 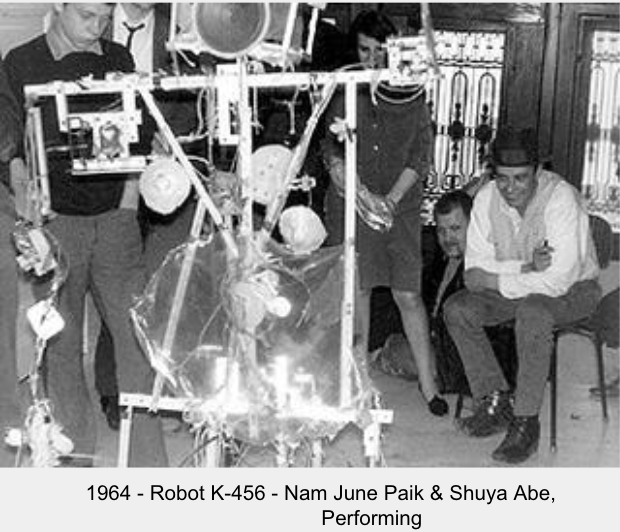 Nam June Paik said the robot K-456 is the the “first non human performance artist ”. It is a “Humanized technology”.

This robot resembles human with its body parts and qualities of a human being, which it can talk, walk and interact.

At the time of its creation, “the robot’s ability to look a human counterpart in the eye would have made an uncanny impression.” It is quite scary that people can make a humanized robot from scratch even from home-found material.

At the same time, Paik redefine art by challenging the classical art sense. He used wire and junk iron to create art. And replace the traditional tools and material such as paint and canvas. This work is a noisy art object (metal part of its body colliding when it walks). Paik was trying to make it as funny, interactive, and leave an uncanny impression on its viewers.

This work is often modified to perform new functions for performances. In 1982, this robot was set in motion again which Paik intending to recreate the work. 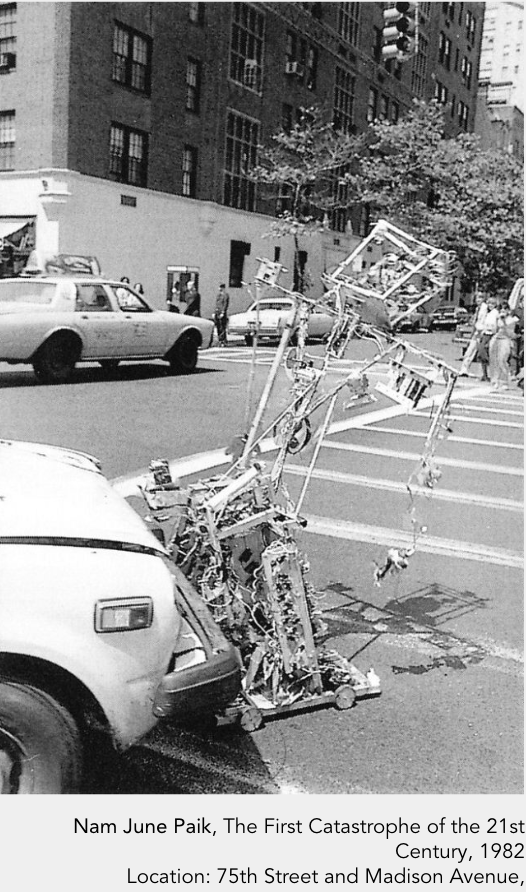 Paik called the performance as “the first catastrophe of the 21st century” trying to reveal the falsehood of mechanical rationality(robot trying to act like human and technology goes out of control) and propose a humanized machine that possesses human anxiety and emotion and experiences life and death. Living when it step out of the museum, no longer static, then communicate with audience, (walk, talk and interact) experienced death when the car crash on it.

Predicting the future of robotics

Through this performance art, Paik predict the future of robotics.

Paik described the accident as the “The first catastrophe of the 21th century”. When asked what this means he said He was looking ahead to the 21st century, when he would have to cope with the catastrophe of technology. Technology have restriction and instability which possibly out of human control.

Michelle Yun describes as “a reminder of technology’s limitations and the importance of prioritizing humanity over scientific innovations.” This catastrophe was the sense, created by the impact of new technologies. It suggested the potential problems that arise when technologies collide out of human control, that our lives and environment were threatened

Medium is the Message

As shown in the video, the crash caused a sharp intake of breath even for contemporary viewers.

If a metal piece is being hit, will you try to save and help? Possibly not right.(except it is blocking the way…)

It looked nothing like a human, but its behavior told the audience that it is experiencing an accident which the audience can connect and sympathize to the robot. The audience treating the robot as a human, and seeing technology as part of themselves.

“If it doesn’t look like a body, how can we persuaded to respond as they are as living creatures?”

The important product of this accident is the audience reaction. It shows the way how human treat and see technology. It exhibits the instinct reaction of its audience.

Reason why he created this work is that he lived in a technological revolution period at that time and see the birth or use of the the atomic bomb, home televisions, spaceships, photocopiers, communications tools. The witness and experience of the horror of the atomic bomb and the beauty of a moon landing.

Through the public performance, Paik is trying to say that human must not rely on technologies, nor become too afraid of technology itself because we are human, and we need to communicate face-to- face. We have to control the machine before they control us completely. (Being controlled by technologies means the addiction and dependance to technologies, e,g, smartphone.) 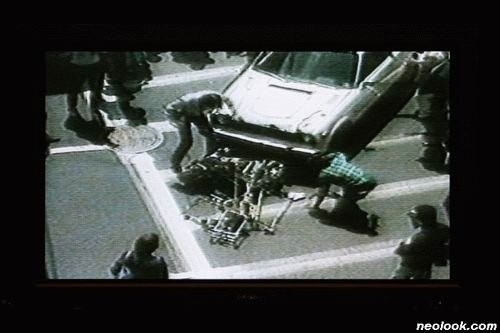 Nam June Paik questions the social value, meaning and acceptance of happenings, event, etc through his performance art. He created a new work of art in a new art form and tackled questions about the morality of technology. Robot K-456 is made to experiment its possible humanness and integration with humanity. I am impressed by the public street performance, “The first catastrophe of 21st centuries” turns audience as part of the performance. Artist Bill Anastasi as the manipulator or so called controller of the performance, to test out how human would likely to treat the robot when it encounters an accident. It is interesting that (as I mentioned above) the robot doesn’t look like a human with use of metal material, even though it is in a humanized form, the audience still connect to the robot and tried to help it. I enjoyed Nam June Paik’s Robot K-456 and the 1982 street performance a lot, the message of it is still relevant to today’s world.

Please comment below if you have any thoughts of his work.

Posts by My Categories